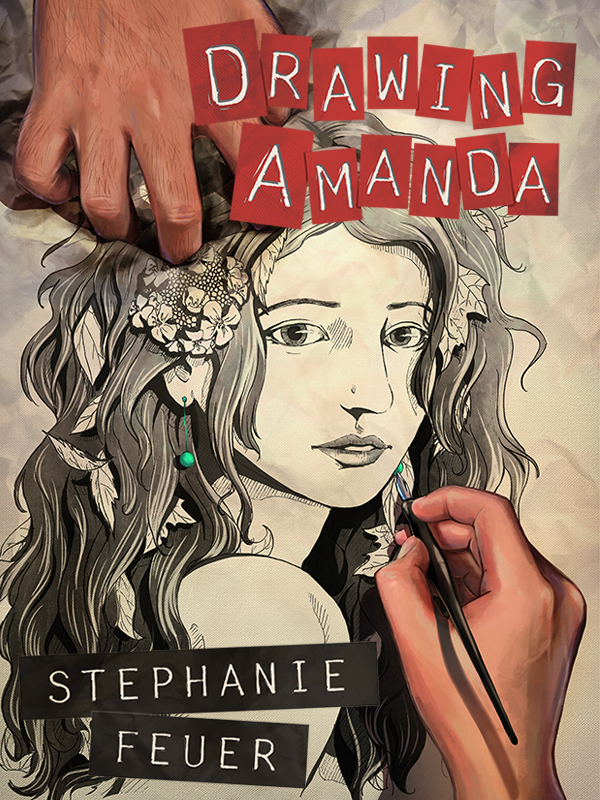 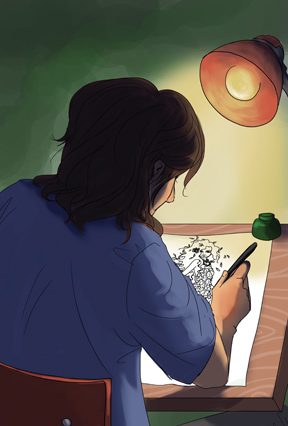 For permission requests, quantity sales or special discounts, please write to the publisher below.

This book is dedicated to you, yes you, the reader, who could be doing other things but chose to read right now.

Good choice. And thank you.

Chapter 3 Amanda in the Glass Tower

Chapter 4 Inky Gets a Warning

Chapter 7 Not a Girl in Megaland

Chapter 16 Between the Lines

Chapter 20 If the Shoe Fits

Chapter 23 The Lines are Drawn

Chapter 29 The Fog Rolls In

Chapter 31 What You Don’t See

Chapter 35 So This Is It

I
N THE HISTORY OF SCHOOL LUNCHES
, no one had ever paid this much attention to a side salad. Inky Kahn swatted a straggle of his long hair away from his face, scrunched up his storm gray eyes and tried to conjure the exact green of the iceberg lettuce in Amanda’s bowl.

He wanted his drawing of her to be perfect, and focusing on the right shade helped. He knew he was rusty; last year he’d filled his notebooks with abstracts, a mad rush of color, emotion running like muck. Rivers of guilt traversing the page.

There were definitely peas in her salad. He remembered how Amanda balanced one on her fork while she laughed (she laughed!) at his story about how he got his nickname. And asparagus? Did she have asparagus? Are there even asparagus in October?

The top of his chest throbbed as if his heart had been pushed up, displaced by grief, his insides swollen from the burden he carried. He bit his lip as he struggled to recall the items on her lunch tray, then stroked a single line of black ink on the page before him. There were things that actually mattered in the world, Inky knew, and just in case he’d forgotten, his school, Manhattan’s prestigious Metropolitan Diplomatic Academy, served up heaps of world tragedy and disaster as part of the curriculum. But at this moment, the world, his world, depended on him drawing Amanda.

T
HE CAFETERIA WAS LOUD.
The welcome sign proclaimed in sapphire blue letters that 82 different mother tongues were spoken by Metropolitan Diplomatic Academy students. To Inky, it sounded like they were all being spoken at once. Twelve grades of excitement, none of it his.

The first year in high school, Upper One, didn’t promise to be any different from middle school, if the cafeteria was any indication—same blue paint, big gray tables and uncomfortable popsicle-orange plastic chairs. Everyone was sitting at their usual tables, too—everyone who came back.

Inky tucked his head as he passed Curry Hill, where a gaggle of Indian girls shared the right side of the cafeteria with the Math-letes who’d appropriated the table where he used to sit when his old crew was around. They were all now attending the High School of Art & Design. He’d missed too much school last year to bother applying, even though he was the most talented of the group.

He felt a tap on his shoulder. “WB, dude. Welcome back,” his friend Rungs said. He was tall and twig-skinny. Over the summer he’d let his black hair go spiky, so he looked like a manga comic character.

Rungs raised his paper cup of coffee and took a big sip. “Jetlag. Got back from Thailand Sunday. Three weeks of mom’s cooking.” Rungs patted his belly. “And quality time with Apsara, who, IMHO, is prettier than ever. But that’s just my humble opinion.”

“Excuse me, and WTF,” Inky said. “What’s with the abbreviations?”

Rungs, short for his last name, Rungsiyaphoratana, was a second generation computer geek. His father did intelligence work for the Thai government, lasting through a string of prime ministers.

There was a momentary commotion as the Frenchies, kids from French-speaking countries or international schools, pushed two tables together, spanning from Curry Hill to the middle of the cafeteria where Sven Thorsson and the Soccer Boys had taken their alpha place in the center.

Inky and Rungs walked toward the back of the cafeteria. “Anything else I should know?” Inky said.

Rungs whipped out a mini pocket computer, sleeker than anything available in U.S. gadget stores. “64 gigs and the pre-release of the super nimbus processor.”

The most ethnically-mixed group was a group of girls who sat down in unison like a rehearsal for a Junior Miss World pageant. The Sacred Circle, they called themselves, and they were all stunning in their own way. Hawk stood off to the side, petite but commanding because of her perfect posture and sinewy build. She shook out her dirty blond ponytail and changed from skateboard shoes to ballet flats. She looked up, caught Inky’s eye and sneered.

Inky looked away as he and Rungs sat down at the table in the back. “Never heard of it,” he said,

“Sweeter.” Rungs turned the small, crisp display screen to Inky to show a picture of Apsara, his girlfriend back in Thailand. Inky whistled.

He put his device back in his pocket and said, “Check this out, dude. One of the nerdesses at geek camp told me about a start-up looking for kids to help with a new game.
Could be the way to get you some exposure. Catapult you to the working art world. Who needs that art high school?”

Rungs grabbed Inky’s pen, the cartridge pen with the swirly green marble design that felt so cool and smooth between his fingers. “Hey,” Inky said indignantly.

“Dude, this could be your golden ticket. Recognition. Opportunity. It’s a start-up. The launching pad to fortune, my man.” Rungs deliberately glanced over at the table where the art students used to sit. “Chill. Don’t worry about your pen.”

Inky stared at the pen in Rungs’s hand. It’d been his father’s, and he carried it like a talisman.

“You gotta check this out,” Rungs said, ignoring Inky’s glare, as he reached for Inky’s black sketch notebook.

“Don’t touch that,” Inky said, covering the pages with his hands.

Rungs rolled his eyes and patted his pockets looking for paper—as if he ever carried any. Then he sighed heavily. Inky couldn’t help but smile, but held tight to his sketchpad.

Rungs looked toward the table adjacent to theirs. Inky saw a girl with wild dark hair he didn’t recognize sitting alone behind them. Rungs reached his long arm over to her notebook, jiggling the table as he knocked into a chair.

“You don’t mind if I borrow a piece of paper?” Rungs said, not waiting for her answer. The girl looked up—her eyes were brown with flecks of gold. Raw umber.

“Hey,” she said, stretching out the word. She narrowed her eyes, and the flecks took on a more intense hue. Inky looked at her, then couldn’t look away. He knew he was staring. She wasn’t classically pretty; her features were a striking mix of pure Anglo and mestizo. It was a pretty he learned to appreciate at MDA—zebra pretty, the girls called it.

Rungs snatched her notebook. She’d reached for it too late. Inky could see the curve of her arm through the stiff white fabric of her shirt.

Rungs opened the notebook to the first page and tapped on the paper to get Inky’s attention.

Demon's Doorway by Glenn Bullion
Crysis: Legion by Watts, Peter
Marry or Burn by Valerie Trueblood
A World of Love by Elizabeth Bowen
Theirs Not to Reason Why 5: Damnation by Jean Johnson
Microsoft Word - Taxes_and_TARDIS-NR_Walker.doc by Dawn
Out of the Mountains by David Kilcullen
Love's Awakening by Stuart, Kelly
Writing in the Dark by Grossman, David
Mission of Hope by Allie Pleiter
Our partner