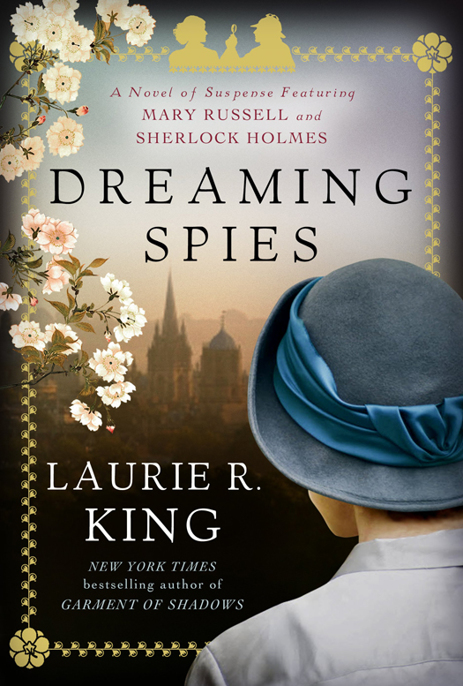 Dreaming Spies
is a work of fiction. Names, characters, places, and incidents are the products of the author’s imagination or are used fictitiously. Any resemblance to actual events, locales, or persons, living or dead, is entirely coincidental.

BANTAM BOOKS and the HOUSE colophon are registered trademarks of Random House LLC.

… that sweet city with her dreaming spires …

Book One: Bombay to Kobe The year before: April 1924

Sherlock Holmes raised his tea-cup to his lips. He swallowed absently, then glanced down in surprise, as if the homecoming drink had brought to mind the face of a long-forgotten friend. “Is it the water from our well that makes Mrs Hudson’s tea so distinctive,” he mused, “or the milk from Mrs Philpott’s cows?”

My lack of reply had no effect on his pursuit of the idea.

“It would make for an interesting monograph,” he continued. “The significance of a society’s hallmark beverage. Tea: Moroccan mint, Japanese green, English black. In America, there is—well, one can hardly call it ‘coffee.’ The Bedouin, of course …”

I only half-listened to his reverie. Truth to tell, I was enjoying not only the contents of my cup, but the lack of fretting waves beneath my feet and the peace of this cool spring afternoon. We had just returned, after what began as a brief, light-hearted trip to Lisbon became (need I even add the word “inevitably”?) tumultuous months in several countries. This
was far from the first time I had stood on the terrace with a cup of tea, appreciating not being elsewhere. Although it did seem that no sooner was I enjoying the peace than something would come along to shatter it: an urgent telegram, a bleeding stranger at the door. I stirred.

“You are right, it’s probably best to leave America out of the matter. Although possibly—”

“Yes, Russell, it is a rock. A rather fine rock, would you not agree? An almost … Japanese sort of a rock?”

I turned my eyes from husband to granitic intruder.

Higher than my knee, with an interesting pattern of moss and lichen and a tracery of dark veins running through it, the stone had been planted—for “planted” was the word—in the flower bed encircling the terrace. And not in a central position, but asymmetrically, half-concealed behind a rounded juniper. In the spring, it would almost disappear beneath Mrs Hudson’s peonies.

Almost disappear. As it was
almost
Japanese. As I reflected on the massive and permanent shape, I realised that it looked as if it had risen from the Sussex earth long before juniper and peony were introduced. Before the old flint house behind me was built, for that matter—although it had definitely not been there when I left for Portugal the previous November.

“It was most peculiar.” Mrs Hudson’s voice behind us sounded apologetic. “These four Oriental gentlemen drove up in a lorry, and while the three young ones began to unpack the thing—it was wearing a sort of straw overcoat!—the older one marched back here to look at the terrace. He poked at the ground for a few minutes—hard as stone itself, it being that cold snap we had in December—and asked me what colour my peonies were. It’s beyond me how he knew there were peonies at all. He was polite, you understand, but a little … quiet.”

We both turned sharply to look at her. “Did he threaten you?” Holmes demanded.

“Heavens, no. I told you he was polite. Just … well, once or twice you’ve had folk here who, shall we say, give one the feeling that it’s good they’re on your side. If you know what I mean?”

“I suppose. Although honestly, it was only his nature, not in the least aimed at us. In any event, Patrick was here.” A complete non-sequitur, since our farm-manager looked about as threatening as one of his draught horses. “But the fellow clearly wasn’t about to explain. So I told him—what colour they were, that is—and he said he was terribly sorry, his men would need to move one of them, but that the darker one should be fine where it was, and that’s what they did. They were careful, give them that. Seemed to know what they were doing. After they left, I’d have had Patrick put Daisy into harness and drag the thing away into the orchard, but I thought it might be something you’d arranged and forgot to mention. In any event, once I’d lived with it for a few days, it grew on me, like. Peculiar ornament for an herbaceous border, but not all that bad. And I could see that the peony would be better where the Oriental gentlemen put it. So, shall I have Patrick remove it?”

Under other circumstances, I’d have read Holmes’ quick reply as an urgent need to keep her from danger, but I thought it pretty unlikely that this massive object could be hiding a bomb. Instead, I took his fast refusal to mean that this drastic addition to our accustomed view was having the same effect on him as it was on me: once the eyes had accepted the shape, the mind began to rearrange the entire garden around it. In less than the time it took to drain one cup of tea, I was beginning to suspect that, were Patrick to hitch up his horse and haul this foreign stone into the fields, our terrace would forever be a lesser place.

As Mrs Hudson said, the thing grew on a person.

“They didn’t leave a message?” I asked our housekeeper.

“Not as such. Although he did say one odd thing. When they were done, the others went back to the lorry but he sat, all cross-legged and right on the paving stones, just looking at his rock. In the cold! I brought
him out a travelling rug, I was that worried that he would freeze, but he took no notice.

“I went back inside, looking out at him every so often, and I was just wondering if what I needed was Constable Beckett or the doctor, when the fellow stood up again. He walked all the way around the thing, then came and knocked on the kitchen door to give me back the rug. Neatly folded, too. I offered him a cup of tea, but he said thank you, he had to be getting on. And then he said, ‘Tell your master he has a chrysanthemum in his garden,’ although how he’d know that at this time of—”

At the name of the flower, Holmes and I looked at each other, startled.

“Mrs Hudson,” I interrupted, “what did the fellow look like? Other than being Oriental.”

“Well, I suppose he was a bit taller than usual. Certainly he was bigger than the other three.”

“With a scar on his hand?” Holmes asked.

But we didn’t wait to hear the rest of it. As one, we set our cups upon the table and strode across the terrace to the steps leading to the orchard and the Downs beyond. At the small inner gate, we turned to look. This, the more hidden side, looked as if someone had tried to carve a flower on it, a thousand years before.

A venerable stone we had last seen a year ago in the Emperor’s garden in Tokyo.

Homecoming to a strange land
,