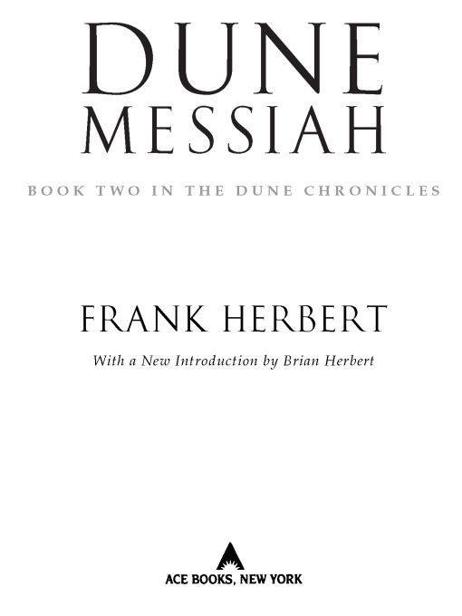 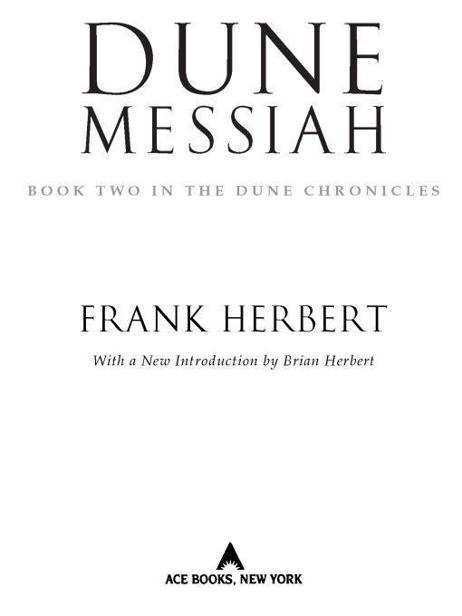 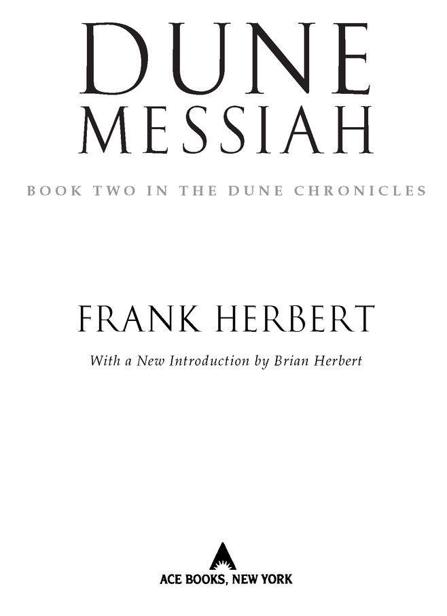 INTRODUCTION
by Brian Herbert
D
une Messiah
is the most misunderstood of Frank Herbert’s novels. The reasons for this are as fascinating and complex as the renowned author himself.
Just before this first sequel to
Dune
was published in 1969, it ran in installments in the science fiction magazine
Galaxy
. The serialized “Dune Messiah” was named “disappointment of the year” by the satirical magazine
National Lampoon
. The story had earlier been rejected by
Analog
editor John W. Campbell, who, like the Lampooners, loved the majestic, heroic aspects of
Dune
and hated the antithetical elements of the sequel. His readers wanted stories about heroes accomplishing great feats, he said, not stories of protagonists with “clay feet.”
The detractors did not understand that
Dune Messiah
was a bridging work, connecting
Dune
with an as-yet-uncompleted third book in the trilogy. To get there, the second novel in the series flipped over the carefully crafted hero myth of Paul Muad’Dib and revealed the dark side of the messiah phenomenon that had appeared to be so glorious in
Dune
. Many readers didn’t want that dose of reality; they couldn’t stand the demotion of their beloved, charismatic champion, especially after the author had already killed off two of their favorite characters in
Dune
, the loyal Atreides swordmaster Duncan Idaho
1
and the idealistic planetologist Liet-Kynes.
But they overlooked important clues that Frank Herbert had left along the way. In
Dune
, when Liet-Kynes lay dying in the desert, he remembered these words of his father, Pardot, spoken years before and relegated to the back reaches of memory: “No more terrible disaster could befall your people than for them to fall into the hands of a Hero.” Near the end of the novel, in a foreshadowing epigraph, Princess Irulan described the victorious Muad’Dib in multifaceted and sometimes conflicting terms as “warrior and mystic, ogre and saint, the fox and the innocent, chivalrous, ruthless, less than a god, more than a man.” And in an appendix to
Dune
, Frank Herbert wrote that the desert planet “was afflicted by a Hero.”
These sprinklings in
Dune
were markers pointing in the direction Frank Herbert had in mind, transforming a utopian civilization into a violent dystopia. In fact, the original working title for the second book in the series was
Fool Saint
, which he would change two more times before settling on
Dune Messiah
. But in the published novel, he wrote, concerning Muad’Dib:

He is the fool saint,
The golden stranger living forever
On the edge of reason.
Let your guard fall and he is there!

The author felt that heroic leaders often made mistakes … mistakes that were amplified by the number of followers who were held in thrall by charisma. As a political speechwriter in the 1950s, Dad had worked in Washington, D.C., and had seen the megalomania of leadership and the pitfalls of following magnetic, charming politicians. Planting yet another interesting seed in
Dune
, he wrote, “It is said in the desert that possession of water in great amount can inflict a man with fatal carelessness.” This was an important reference to Greek hubris. Very few readers realized that the story of Paul Atreides was not only a Greek tragedy on an individual and familial scale. There was yet another layer, even larger, in which Frank Herbert was warning that entire societies could be led to ruination by heroes. In
Dune
and
Dune Messiah
, he was cautioning against pride and overconfidence, that form of narcissism described in Greek tragedies that invariably led to the great fall.
Among the dangerous leaders of human history, my father sometimes mentioned General George S. Patton because of his charismatic qualities—but more often his example was President John F. Kennedy. Around Kennedy, a myth of kingship had formed, and of Camelot. The handsome young president’s followers did not question him and would have gone virtually anywhere he led them. This danger seems obvious to us now in the cases of such men as Adolf Hitler, whose powerful magnetism led his nation into ruination. It is less obvious, however, with men who are not deranged or evil in and of themselves—such as Kennedy, or the fictional Paul Muad’Dib, whose danger lay in the religious myth structure around him and what people did in his name.
Among my father’s most important messages were that governments lie to protect themselves and they make incredibly stupid decisions. Years after the publication of
Dune
, Richard M. Nixon provided ample proof. Dad said that Nixon did the American people an immense favor in his attempt to cover up the Watergate misdeeds. By amplified example, albeit unwittingly, the thirty-seventh president of the United States taught people to question their leaders. In interviews and impassioned speeches on university campuses all across the country, Frank Herbert warned young people not to trust government, telling them that the American founding fathers had understood this and had attempted to establish safeguards in the Constitution.
In the transition from
Dune
to
Dune Messiah
, Dad accomplished something of a sleight of hand. In the sequel, while emphasizing the actions of the heroic Paul Muad’Dib, as he had done in
Dune
, the author was also orchestrating monumental background changes and dangers involving the machinations of the people surrounding that leader. Several people would vie for position to become closest to Paul; in the process they would secure for themselves as much power as possible, and some would misuse it, with dire consequences.
After the Dune series became wildly popular, many fans began to consider Frank Herbert in a light that he had not sought and which he did not appreciate. In one description of him, he was referred to as “a guru of science fiction.” Others depicted him in heroic terms. To counter this, in remarks that were consistent with his Paul Atreides characterization, Frank Herbert told interviewers that he did not want to be considered a hero, and he sometimes said to them, with disarming humility, “I’m nobody.”
Certainly my father was anything but that. In
Dreamer of Dune,
the biography I wrote about him, I described him as a legendary author. But in his lifetime, he sought to avoid such a mantle. As if whispering in his own ear, Frank Herbert constantly reminded himself that he was mortal. If he had been a politician, he would have undoubtedly been an honorable one, perhaps even one of our greatest U.S. presidents. He might have attained that high office, or reached any number of other lofty goals, had he decided to do so. But as a science fiction fan myself, I’m glad he took the course that he did. Because he was a great writer, his cautionary words will carry on through the ages and hopefully influence people in decision-making positions, causing them to set up safeguards that will protect against abuses of power, both by leaders and by their followers.

Time Flying by Dan Garmen
A Thousand Glass Flowers (The Chronicles of Eirie 3) by Prue Batten
Eight Ways to Ecstasy by Jeanette Grey
End Times by Anna Schumacher
Crown Of Fire by Kathy Tyers
Clarke, Arthur C - SSC 04 by The Other Side of the Sky
A Killer's Agenda by Anita M. Whiting
Sinful Ever After (Sinful Serenade Book 5) by Kaswell, Crystal
Angel Of The City by Leahy, R.J.
Sweet Misfortune: A Novel by Milne, Kevin Alan
Our partner