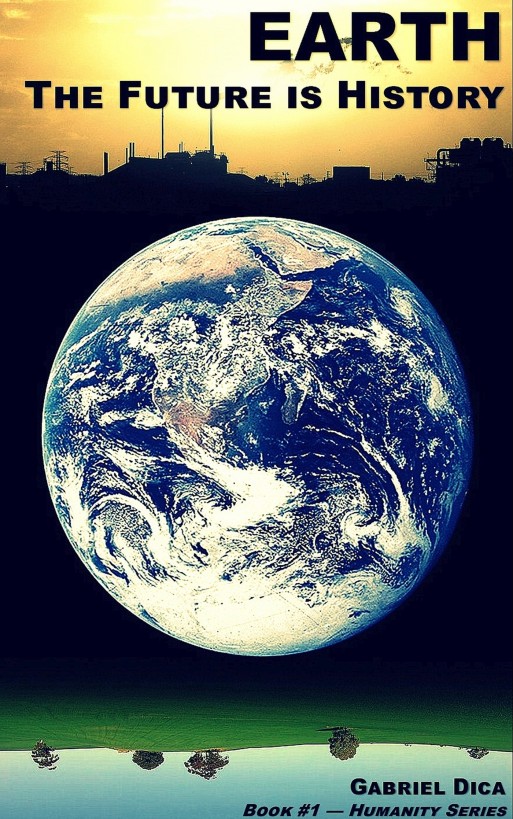 This eBook is licensed for your personal enjoyment
only. It may not be re-sold or given away to other people. If you
would like to share this eBook with another person, please purchase
an additional copy for each recipient. If you’re reading this and
did not purchase it, or it was not purchased for your use only,
then please return to your favorite eBook retailer and purchase
your own copy. Thank you for respecting my hard work.

Final note from the author and excerpt from Book #2:
The Ashan Report

All-important discussion topics around the
world today – debated in councils, voted in governments, argued in
summits, presented relentlessly across the globe.

Do you wonder what would happen to us if we
fail to solve these problems? What mankind might become? How our
own humanity will be reshaped and twisted to accommodate new
realities?

With the “Humanity” series, I invite you, my
dear reader, to use my imagination as a tool to shape and see the
dark, possible future of our mistakes.

My name is Gabriel Dica and I’d like to thank
you for reading my book!

The bright, yellow
sunlight entering the room through the large windows does little
more than emphasize all the dust floating in the air. The old,
scratched metal and wood furniture is almost a luxury for many. But
despite the desperate period humanity is trying to overcome,
children still go to schools, students still graduate universities;
hope is not yet lost for them, they might still have a future. The
full room is buzzing with all the students talking, finding their
seats. The protest taking place just outside their windows is
causing a lot of noise; the building, a reminiscence from the old
era, repurposed years ago for the Civil Council’s University in
Jakarta, is right next to the small park in front of the newer
Council Hall. No one seems to notice or care about the uproar
happening close by.

The room starts to quiet down as professor
Jawaad Noya, the most important name in human, social and political
sciences in the world – and one of the greatest minds of this era –
enters the room. The tiny woman, well in her fifties, wearing her
usual two-piece white suit and large purple hat, is in extreme
contrast with the faded, gray, dusty room she finds herself in. She
was appointed by the Civil Council to hold a special lecture for
today’s celebration – a welcome chance for her to inspire the young
minds attending.

After a brief moment of analyzing the class,
she makes her way to the podium.

All the senior students are present, quietly
watching the professor as she sets her tablet on the stand.

Noya, with her head down, scrolling through
her notes, addresses her audience: “Who can tell me why we’re all
here today?”

One of the young minds, seated near the
center of the classroom, stands up and answers her obvious
question, ironically: “Today is the day that marks two-hundred
years since we sent the terraforming probe to Asha. Or, more
accurately, today marks two-hundred years of incompetence,
professor, and we’re all here to celebrate it!”

The room seems slightly amused, softly
whispering to each other. Unimpressed, Noya barely shows a slight
nod, before addressing the student: “I see. It’s great that you can
see the “incompetence”, as you call it. I assume you don’t agree
with it?”

The young student: “Of course not! The
situation we are in… It’s unacceptable! “

Noya, still looking down at her tablet: “I
agree, it’s unacceptable.”

After a short pause, she lifts her head and
looks at the young student: “So, what exactly are you doing to
change it? Aren’t you just as “incompetent” as everyone else?
Hiding under apparently pertinent excuses… “I’m just a student,
what can I do?”, or “That’s not my job, our leaders should solve
problems, not me!”. Is any single one of you doing anything,
anything whatsoever, to change the unacceptable state we are in
today?”

Puzzled, the student quietly sits down.

Certain that she’s captured the entire room’s
attention, Noya starts slowly walking around the podium, making
soft hand gestures, delivering her speech: “The word you’re looking
for is not “incompetence”, but “ignorance”, I think. Of course,
this isn’t new. It’s not something happening only in the past
twenty years… Or even the past two-hundred years. No. Throughout
our entire history we can clearly see it: egos more powerful than
common interest, assigning blame instead of finding solutions...
History, my young and eager minds! History is an indistinguishable
entanglement of truths and lies, written and told and learned by
all of us and all those before us… And everyone that is yet to be
born, as we, right now, at this very moment, are writing the
history future generations will read. Remember this: the past is a
tool, offering us a way to look back and forever wonder how we
could have done things differently; a way for us to clearly see the
crucial importance of key decisions… after they’ve been made. Of
course you can see the “incompetence” now, after learning about our
history, after reading about the effects our past decisions had.
And of course you can unquestionably determine what should have
been done, instead of what had been done. “Why did we choose so
poorly?”. The never-ending discussions that start with that simple
– what if…? –“

Noya stops walking and turns towards the
young student: “But what are YOU doing different from all those
before you?”. Walking back to the center of the podium, she quietly
signals him to stand up.

Noya: “Unfortunately, my dear Filip, my
initial question wasn’t about our reason for gathering here today,
but for the reason we are all here, mankind.”

Noya turns to the rest of her audience: “So.
How did we get here, on the brink of extinction, as a race? What
are those crucial moments when we should have chosen
differently?”

The question comes as a surprise, all eyes
lost in thought, contemplating, searching for an answer to this
unexpected question. They all thought she was here just to offer a
lecture, not ask them to participate.

A young, blonde woman stands up: “There are
hundreds of reasons why we’re in this situation, perhaps hundreds
of known and unknown decisions that led us here. But I think,
probably one of the most important reasons why we’re so close to
failing as a race, is because of all the wars, the endless fighting
for territory and resources, for control. I believe that’s what
kept our ancestors from focusing on what should have been
done…”

Noya: “Wars. Good, let’s start with them and
we’ll slowly work our way towards the true reason we’re here.”

Noya: “Filip, time to test your knowledge.
Let’s go back to the formation of the World Alliance. What caused
it? What determined the entire human population to demand it?”

Filip, being a passionate history reader,
seems relieved to be asked about a topic he knows well. But
everyone else is just wondering what the professor is doing, this
doesn’t seem to be a typical lecture.

Filip: “I believe the mechanism that led to
the signing of the World Alliance was put in motion in the early
21
st
century. Sure, we know now just how important the
health of our planet is, but back then no one seemed to care. Not
really. Despite a few attempts to work together and slow the
accelerating decay of our planet, despite signing agreements
several times, the world’s leaders of that period never seemed to
truly grasp the importance of their decision to ignore nature – or
all the scientists making endless pleas to pay more attention to
our precious world. Their focus was somewhere else entirely: high
consumption rates were driving the economy of that period; in turn,
the economy was dictating politics, so it’s no surprise that a lot
of territories were involved in wars over natural resources all
over the globe. Back then humankind was geographically divided into
countries, each with its own leader, each considering itself more
important than any other, each struggling to obtain control over
more and more resources. It’s hard for me to imagine what it must
have been like, hundreds of leaders all wanting what someone else
had.”

Noya, interrupting Filip to address the
class: “Indeed. It’s hard now to realize the incredible friction
and tension this must have involved. With no central leadership,
Earth was heading in 195 different directions, that’s how many
different countries and different leaders we had. Imagine the
improbability they would all agree on or decide together a common
direction to follow.”

The noises outside seem to be getting louder
as the protest is moving closer to their building. Noya points to
Filip, telling him to continue with his story as she walks to the
open window and closes it.

Filip: “The Third World War started over an
area now known as the Syrian Strip, an area of strategic importance
for several, conflicting powers. It’s not entirely clear what
caused the final escalation that lead to the entire world entering
the war, but tensions had been growing for years; the historical
records of that period are conflicting and different entries from
different nations are telling very different stories, so we don’t
even know the exact date when the war started, we just know that it
was somewhere in the Autumn of 2017.”

Noya: “I want to make something clear to all
of you, because I know most of you are imagining a world war much
like the fighting we’ve had last year: a world war is exponentially
more devastating and consuming than a revolution. A revolution
generally involves less militarized conflict, certainly less heavy
arms – like tanks or armed aircraft – and definitely a lot less so
called “weapons of mass destruction” – like bombs that could
destroy entire cities or weaponized viruses that can eradicate
entire nations; the damage caused by a civilian revolution trying
to overthrow the leadership is considerably less than the heavily
armed forces waging wars for competing nations. A war that involves
the entire world is absolutely devastating!”

Noya, turning to Filip: “I appreciate your
knowledge on the subject, but let’s jump forward a little. We don’t
want to bore everybody with details.”

Filip smiles in agreement and decides to skip
some of the details he already had planned. “After the Third World
War, there were almost thirty years of sporadic peace with only
localized armed wars. But previous tensions were never resolved, so
the world again joined in another, even more devastating war. In
the late 21
st
century, the peoples of Earth were still
divided, barely surviving, recovering after the Fourth World War.
Years of bombardments and blatant disregard for nature left eleven
billion people struggling with heavy pollution and global water
shortages. Water and air pollution meant crops couldn’t be
effectively grown anymore and famine became one of the highest
problems. To add to the poor state everyone was in, solving these
problems became increasingly difficult as technology prices were
spiking due to the depletion of the much needed rare earth elements
consumed by the wars.”

Noya: “And that’s just part of the problem.
Competing megacorporation interests, corrupted politics and opaque
religions, all with their own agendas, were effectively blocking
any kind of chance mankind had to survive. Earth was at its worst,
incomparable with any other period in our history. And instead of
solutions, leaders seemed to be preparing for yet another world
war…”