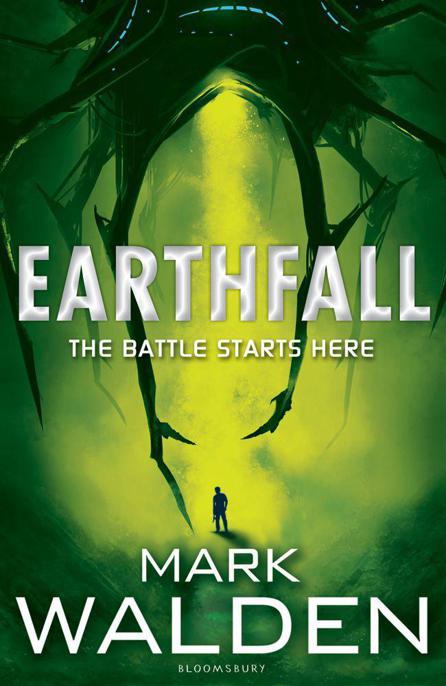 who invaded and took over my world

The boy ran down the rain-soaked street, weaving between abandoned cars. He crouched behind one of the vehicles and tried to quiet his laboured breath. At first he heard nothing, but then behind the noise of the falling rain he made out another sound – one that in recent months he had learned to fear. The high-pitched whine was getting louder, and that meant the Drones had tracked his scent. The boy forced himself to his feet, pushing the long black hair out of his eyes and set off down the road again. He didn’t look back – if there was anything behind him he would rather not know.

He ducked through the broken door of one of the shops lining the street and ran between shelves stocked with now useless electronic devices. Vaulting over a counter at the far end of the shop, he grabbed the handle of a door marked ‘Staff Only’, silently praying that it wasn’t locked. The handle turned and he stepped into the gloom of the room beyond. As the door closed again, he was plunged into darkness. The boy unzipped one of his coat pockets and pulled out a small torch. He played the thin beam of light across the rows of shelves piled high with boxes of all shapes and sizes. Not so long ago, these boxes contained expensive luxuries; now they were just relics of a world that had been lost, probably for ever. He knew that the pouring rain would mask his thermal signature and the telltale sounds of his desperate flight, but it would not make him invisible. He had to keep moving.

He quietly made his way to the back of the storeroom and found the loading bay. To his left he saw the electronic control panel that would once have raised and lowered the rolling steel shutter, and cursed under his breath. He dropped to one knee and tried in vain to pull the shutter up, but without electricity it was pointless – it was locked firmly in place. He froze as the high-pitched whining sound became louder again and he heard the sound of shattering glass coming from behind the Staff Only exit. Fighting a rising tide of panic, the boy looked around the storeroom. He realised, with mounting horror, that heading back through the shop was his only way out.

The boy switched off his torch and slid along the wall in the darkness, trying desperately not to make even the tiniest sound. He stopped as something cold and hard pressed into his back. Turning, he ran his hands over the cool metal cylinder hanging on the wall, feeling a tiny flicker of hope. Then the door to the storefront exploded in a flash of bright green light. He was knocked to the floor by the force of the blast, temporarily blinded by the brilliant burst of light. He lay stunned for a couple of seconds before he was roused by his own terrified voice screaming in the back of his head, telling him to get up; he had to run. He reached for the cylinder and grabbed it, slowly pulling himself to his feet. He froze, not even daring to breathe as something floated through the shattered remains of the door, just a few metres away. It looked like a horrific mechanical jellyfish. The metallic skin that covered the bulbous disc of its body rippled in a disturbingly organic way as clusters of glowing, multifaceted eyes swivelled and twitched, scanning the room. Hanging below its body was a writhing bundle of flexible tendrils, each ending in a vicious, barbed tip. The Drone turned and flew towards him with a piercing screech, its tentacles raised. The boy did not hesitate – he squeezed the handle of the fire extinguisher and the Drone was instantly enveloped in a billowing white cloud of carbon dioxide gas. The boy continued to spray the screeching, flailing machine as he ran past it, heading for the door. He yelped in pain as one of the Drone’s limbs lashed out, its razor-sharp tip slashing straight through his clothes and leaving a long gash across his chest. The boy threw the extinguisher at the creature and ducked through the mangled doorway, knowing that he had bought himself a few seconds’ head start at best. He leapt over the counter and sprinted through the store and into the street. He took the first turn on his left into a debris-filled side alley, looking over his shoulder as he ran. There was no sign of the Drone, but he heard a piercing, unearthly screech that was immediately answered by several identical calls from nearby. The boy knew that he had to get off the street. The rain was starting to ease and in the eastern sky he could see the first signs of dawn. He might be able to outrun the Drones, but they would call for other hunters and against many he knew he had no chance – not in daylight.

He ran out of the far end of the alley and turned right. If he could just make it the hundred metres to the end of this street, then he would be safe, for the moment at least. From somewhere overhead a low, throbbing rumble made the boy glance upwards before quickly dashing for the cover of another nearby shop doorway. Directly above him a huge triangular vessel, its gleaming black skin pulsing with thick veins of sickly green light, flew low over the rooftops. Beams of bright white light speared out as a series of portals opened on its underside, and swept along the streets below. The boy waited until the vessel had passed directly overhead and then sprinted towards the other end of the street. He knew he had just seconds now; he had seen ships like this one before. Ducking behind a wrecked van that was lying on its side in the road, he pulled a short crowbar from his pack and began levering open the manhole cover beside him. At the far end of the street the vessel banked slowly round before coming to a halt, hovering in mid-air. The boy watched as a hatch opened in the bottom of the triangular craft. A black metallic pod ten metres tall slowly floated down and came to rest on the road below. The boy pushed the manhole cover to one side with a grunt and quickly climbed down on to the rungs of the ladder set into the wall of the concrete shaft below. He started to drag the manhole cover closed behind him as the pod began to open. A huge metallic claw wrapped itself around the edge of the opening and something enormous emerged from the shadows within. The boy pulled the manhole cover shut, his heart racing as he climbed down the ladder. Halfway, one foot slipped out from under him and he fell the last couple of metres, landing on his back in the fetid drain water that ran along the bottom of the tunnel below. He winced in pain, but fought the urge to cry out as earth-shaking footsteps thudded overhead. He held his breath as they got nearer and nearer, the vibrations shaking dust from the tunnel ceiling. The footsteps passed directly above him before receding away into the distance and the boy finally let out a long, relieved sigh.

‘Too close,’ he muttered to himself under his breath. He reached into his pack and pulled one of the half dozen recently foraged tin cans from inside and inspected it. ‘After all that, these had better be the best baked beans ever made.’

The boy trudged through ankle-deep water in the sewers, the light from his torch playing over the crumbling brickwork on either side. He rounded a bend and stopped in front of a gate held shut with a padlocked chain. He pulled out the key that hung on a loop of string round his neck and undid the lock, stepping into the passage beyond, before securing the gate once more. He knew that if they found him down here the chain would make little difference, but it made him feel better all the same.

He walked along the passage and into the chamber ahead of him. There was a large circular cistern, filled with water in the middle of the room and a grate far overhead that allowed at least some of the daylight from the world above to filter down to where the boy stood. He headed up a staircase that spiralled around the cistern, leading to a door marked ‘Maintenance’. Using a disposable lighter he lit the gas-powered camping lamp that sat on the shelf just inside the door. He closed the door, then carried the lamp and his backpack over to the table on one side of the room. He sat down on the folding metal chair in front of the table and started to unload the contents of the pack. He looked at the six cans of beans that he had managed to find in the flat above one of the local shops. It was enough for a week, ten days at the outside.

Every day it was getting harder to find food as the Walkers systematically looted for anything edible. Fresh water was difficult to locate too, ever since the taps had run dry. He was starting to wonder if London was still the best place for him to be. Sure, there were lots of places to hide and initially there had been plentiful supplies everywhere, but the Walkers were stripping the city bare and it seemed like there were more and more Drones patrolling every night. If things kept on this way, it was only a matter of time before they caught him.

‘Might be time for a holiday in the countryside,’ the boy said.

He shook his head with a sigh; he had to remember to try not to talk to himself. At first it had been comforting, but after a while it had made him notice all the more acutely that there was now no one left to answer. He pulled the water bottle from the side pocket of his pack and allowed himself one quick swig. The one advantage of the rain last night was that he had at least been able to top up his water supply. It certainly wasn’t mineral water, but it would do. He put five of the tins on the shelf above the table and opened the sixth one, eating the beans cold from the tin with a spoon. When he slept, he dreamt about hot cooked meals, but even though he had managed to find a camping stove on one of his earlier foraging expeditions he rarely had the time or the motivation to use it. He scraped the last of the tomato sauce out of the tin and threw it into the corner of the room, where it joined many others.

Baby Please Don't Go: A Novel by Frank Freudberg
(2005) Rat Run by Gerald Seymour
A Texan's Honor by Leigh Greenwood
Wraithsong by E. J. Squires
Brute: The Valves MC by Faye, Carmen
Overrun by Rusch, Michael
The Japanese Girl by Winston Graham
The Japanese Ninja Surprise by Jeff Brown
The Lady and the Officer by Mary Ellis
Great Day for the Deadly by Jane Haddam
Our partner