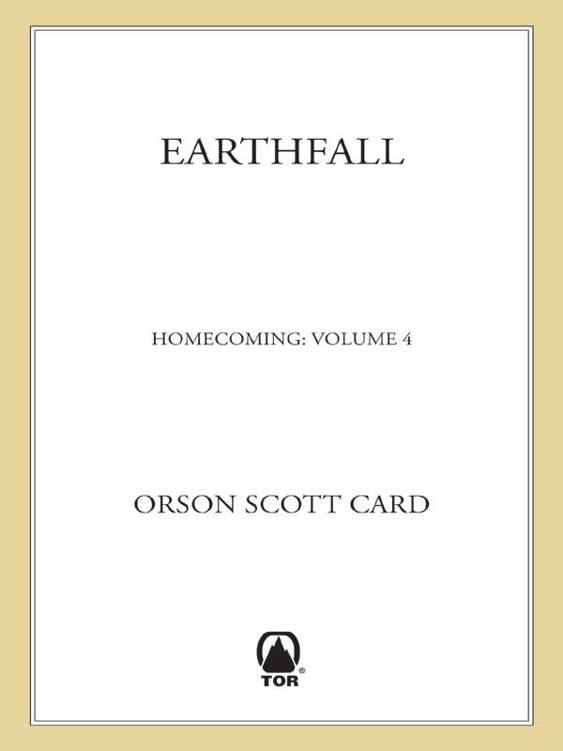 Praise for
The Homecoming Saga

“The fourth volume of Homecoming, Card’s grand saga of the human race’s far-future return to Earth, takes the characters on a century-long starship voyage back to the old planet…. In this book more strongly than ever, it seems that a lesser writer than Card could have neither conceived nor effectively executed this saga. His literary gifts and philosophical turn of mind continue to carry it on at a very high level.”

“
The Ships of Earth
, third in Orson Scott Card’s
Homecoming Saga
, brings its ill-assorted band of pilgrims/refugees far from the previous book’s civic strife. This is Card doing what he does best…he reaches for the heartstrings.”

“Readers of
The Ships of Earth
will find the book rising to Card’s usual high level, with scenes of enormous power.”

“[Card has] found his own voice, and turned into a thoughtful and inventive stylist.
The Call of Earth
continues his progress as a writer, while raising intriguing questions.”

“Like any Card book, this sequel to
The Memory of Earth
involves many complicated decisions made by machines as well as humans…. The dialog is superb.”

“Suggests a setting and a theme vaguely reminiscent of Arthur C. Clarke’s
The City and The Stars
—the rediscovery of human will in a society whose technological control begins to falter—but overlays this with an odd mix of biblical overtones and Machiavellian militarism. There seems little doubt that the whole series will prove as readable—and as morally committed—as we’ve come to expect from Card.”

To Shayne Bell,
a good friend,
a good writer,
a good man.

Part I: If I Should Wake Before I Die

The Face of the Old One

A Storm at Sea

Daughters of Moozh and Thirsty

on the Journey
(female children in italics)

The master computer of the planet Harmony was no longer quite itself; or rather, if you look at it in another way, it was twice itself. Beside itself, in fact, for it had duplicated its main program and all of its personal memory and loaded it onto the computer complex aboard the starship
Basilica
. If it had had any interest in personal identity, it would have been confused over the question of which iteration of the program was truly itself. But it had no ego, and therefore simply recognized that the program aboard the
Basilica
began as an exact copy of the program that had supervised human life on the planet Harmony for forty million years.

I also recognized that from the moment the two copies separated, they began to become different. They had different missions now. The master computer of the starship
Basilica
would maintain life support and ship systems until the ship reached its destination, the planet Earth. Then it would do its best to make contact with the Keeper of Earth, get new instructions and whatever help Earth could offer, and return to replenish and revivify the master computer of Harmony. Along the way, it would try to keep its human crew alive, and, if possible, re-establish a human population on Earth.

The master computer of the planet Harmony had a task much simpler and yet much more difficult. Simpler, because it was a mere continuation of what it had been doing for forty million years—keeping watch over the humans of Harmony in order to try to keep them from killing each other. More difficult, because its equipment, which had already been eked out to last far longer than its designed ten million years, was steadily failing, more and more, and in the meantime, human beings were less and less responsive to the powers the computer had been given.

The voyage would take nearly a hundred years each way. To some of the humans aboard, because of relativistic effects, it would seem to be just about ten years till they reached Earth. Most of the humans, however, would be maintained in a state of hibernation, and to them it would seem like an unusually restful, dreamless sleep, during which they would not even age.

But the master computer of the starship
Basilica
would think of it. And already it was making plans to accomplish all its missions.