Read East of Redemption (Love on the Edge #2) Online

East of Redemption (Love on the Edge #2) 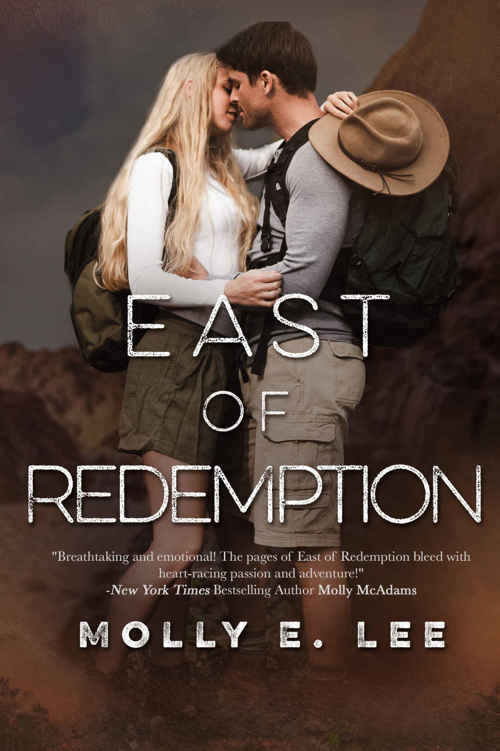 This book or any portion thereof may not be reproduced or used in any manner whatsoever without the express written permission of the publisher except for the use of brief quotations in a book review. This is a work of fiction. Names, characters, businesses, places, events and incidents are either the products of the author’s imagination or used in a fictitious manner. Any resemblance to actual persons, living or dead, or actual events is purely coincidental. This book is licensed for your personal enjoyment only. This book may not be re-sold or given away to other people. If you would like to share this book with another person, please purchase an additional copy for each person you’d like to share it with. Thank you for respecting the author’s work.

Regina Wamba at
Mae I Design

For Dad. Thanks for raising me on proper films like Indiana Jones and Star Wars.

Darkness had a new definition when submerged more than eight hundred meters beneath the ground, and though armed with LED lights on our helmets, they weren’t a force against the pitch-black that swallowed the areas just out of reach. The smell of wet earth, dust, and stagnant air filled my lungs with each deep breath. This wasn’t my first descent into one of the thousands of caves in Israel, but I was still mastering control over my heart rate so I wouldn’t overuse the little air allotted down here.

Harrison, my mentor and the only man I’d ever considered as a
father figure
, hugged the wall in front me, but I couldn’t hear his breaths. He’d hunted treasure and survived the elements around it since before I was born. Damn fool made it look as easy as running up a steep hill during recess.

He made quick progress ahead of me, sliding against the wet walls and gaining sure footing a yard or so away. The position I held wouldn’t allow for that fast of movement. I’d like to call the tiny excuse for a ledge we stood on a
path
, but that’d be a lie. It was a spider-web sliver, and we had contemplated turning back when our findings led us to this spot.

That was never really an option, though.

Harrison may have been a well-respected archeologist, but he had a weakness, just as we all did.
His
obsession led us here, nearly a mile deep beneath a sun-soaked Israel, searching for lost artifacts of King Solomon’s treasure. The rumored ornaments from the Garden of Eden, or equally important religious artifacts from the time period would be the equivalent of his Holy Grail. He had shared his crazed
need
to find evidence of the treasure when I was only thirteen. Rain had indulged him like the good daughter she was, smiling with a wispy look in her eye and telling him he’d find it one day. But me? I had truly believed he would, and that was the day the prospect of archeology sunk its hooks into me.

That was six years ago, and I’d hunted with him since. Harrison had been the best teacher I’d ever had, and my reasoning for leaving school had been justified through his incredible teachings. He not only instilled a real-world education within me, he earned my respect like no other authority figure ever had in my life, and I wouldn’t let him down. Ever.

He’d taken me in after finding me wandering the back alleys of Oregon, living out of garbage cans after bucking the foster system. I’d never known a family outside of him and Rain, but I’d never called him father, either. He was more than that. I respected him, admired him, wanted to make him proud.

“Easton?” The softness in Harrison’s voice pierced the silence that engulfed the cave, and I jolted slightly as I tracked his line of sight. He held the wall with one hand, pointing across the vast expanse of air between the walls.

My light barely hit it, but my breath stalled in my lungs. A slip of rock connected the walls like a bridge, and on the other side rested a chamber. Not the fancy kind like in the movies, but it was a clear indication of human hands with a mindset to store whatever filled it.

Harrison’s blue eyes went wide as he surveyed the rock between the walls.

“It can’t be stable,” I said, analyzing the structure for weak spots. “There has to be another way across.”

He tilted his head, causing his light to crane just past me. “You see any, kid?”

My muscles ached from plastering myself to the wall, and my bones creaked as I slowly shifted position so the pack on my back pressed against the wall. I scanned the area, searching for a safe way to get to the chamber. “We’ve got two options.”

“And?” Harrison indulged me, as he always did in a way to challenge my thought process. I was sure he’d be pushing my brain to calculate escape routes, survival scenarios, and ancient mindsets and lifestyles for many years to come.

“One means a
long
trek to our initial entry point, followed by starting over and taking the opposite wall,” I said and pointed across the distance. “Or”—I huffed, the air thin in my lungs as I glanced down into the darkest pit I’d ever seen—“a
quick
trek across the bridge that could possibly result in a long fall to our deaths.”

His eyes didn’t leave mine, and I already knew his choice. I couldn’t blame him. He’d spent his entire life hunting for chambers exactly like this.

“We can come back tomorrow. Redo the rappel and climb on the right side. It’s doable,” I said.

The chamber taunted him, and his eyes took on a panicked look, like he contemplated
flying
over there. If he had a grappling gun like Batman, he wouldn’t hesitate to use it. Thank God he didn’t.

“Harrison,” I said, noting his small but noticeable movements as he inched his right foot onto the sliver of rock that hung over nothing but darkness.

“These caves have withstood millions of years of the elements, Easton. It’ll hold our weight. You’ve never doubted me before.”

Fuck. I tore my eyes off the endless pit beneath him and swallowed my heart. I moved in centimeters as opposed to his bold inches. He held his hand palm out, stopping me before I stepped onto the bridge.

“Let me cross first. Don’t want to put too much weight on it.”

“You said it would hold.”

“True. But a cautious man is almost as good as a confident one.”

My heart beat against my chest like a fucking hammer. Each second felt like an hour until he made it across. The breath stalled in my lungs. It was my turn. I hoped he couldn’t tell how hard I tried
not
to piss my pants. This was by far the craziest stunt we’d ever pulled, and part of me fucking loved it. Adrenaline coursed through my veins and set my blood on fire, shoving the panicked feeling down in my gut and pissing on it.

I moved faster than I thought capable, and slower than I’d like.

Somehow I grabbed Harrison’s outstretched hand and felt fucking invincible as he yanked me the rest of the way onto mercifully solid rock.

We shared a relief-fueled laugh and turned in unison, carefully entering the small chamber in a crouch.

Our lights filled the space, and I glanced down at the GoPro strapped to my wrist, making sure to point it in every direction possible as I scanned the room.

Harrison gasped and I jerked upright, knocking my head against the hard, sharp ceiling.

“Fuck!” I grabbed my head and found Harrison completely safe, his mouth hanging open as he held a barely together wooden box the size of a wine crate.

“Sorry, but that hurt! I thought you’d slipped through a hole or something—”

“It is!” Harrison carefully fingered a piece of rolled parchment the length of my forearm out of the deteriorating wood. The thing looked like it was made of dust, but the softest of crinkles sounded through the chamber as he unfolded it, and I stopped breathing.

“One of King Solomon’s seals.” He sighed, and I stared at the tears forming in his eyes. He dug in the box again, withdrawing a heavy-looking tablet of bronze.

He’d told Rain and I bedtime stories about the many different seals King Solomon had created when he reigned, most of them depicting verses close to proverbs, or the names of angels.

He sucked in a quick breath and slipped on his archeologist face. “I’m not sure. We’ll have to examine them.” He reached around to his pack and pulled out a cardboard tube he’d carried since before I could remember. He knew he’d find a scroll someday indicating the treasure’s location, or he’d die trying. An excited rush burst through me, honored to be included in this discovery.

After storing the scroll, he ran his hands over the tablet, which had script in near-perfect lines all across it. “This is ancient Hebrew. It’s a record of his possessions—pieces, descriptions, amounts.” His smile grew wider. “Easton, this could prove everything we’ve ever thought about the wealth of Solomon.”

“Look,” I said, pointing just past where the box lay. A worn leather satchel tied with frayed, dust-caked rope sat next to several broken clay pots, now black from dirt and age. I gently scooped up the bag and turned out more than a dozen silver coins. “This looks like another seal,” I said, recognizing the stamp from our studies.

Good Little Wives by Abby Drake
Friends With Benefits by Carver, Rhonda Lee
Sherlock Holmes: The Shadow From Beyond by Erik Branz
A Mile in My Flip-Flops by Melody Carlson
Un mundo feliz by Aldous Huxley
Lorimer and Brightman - 08 - Sleep Like the Dead. By Alex Gray by Alex Gray
Keeping Secrets by Joan Lowery Nixon
Elves: Once Walked With Gods by Barclay, James
The Accidental Alchemist by Gigi Pandian
Mira's Diary by Marissa Moss
Our partner