Read Echoes From the Mist Online

Echoes From the Mist 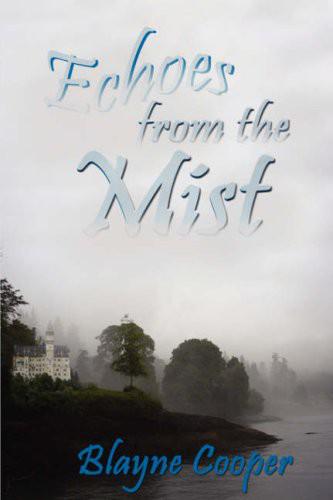 ECHOES
FROM
THE
MIST

These characters originated in the deep, dark recesses of Advocate’s mind and thus belong to no one but me.
.

Special Notice:
This is the sequel to
Cobb Island
. Although there are no squirrels anyplace in that story, it’s still
my
favorite solo piece. I guess there’s no accounting for taste. If you haven’t read
Cobb Island,
it’s still possible to enjoy this tale, but you might find yourself scratching your head once or twice. If so, make an appointment at a dermatologist and remember that I told you you’d get more out of this story if you read
Cobb Island
first. Trust me, it’s mostly painless.Some Scottish words and phrases are contained within. And since I didn’t include any feisty rodents or ugly dogs in the story, I gave you a glossary instead. The giving just
never
ends with me, does it?

Sexual Content:
It’s in there. It involves two women. And it’s steamier than the content in
Cobb Island
. If you’re under 18, please move along. Everyone else is welcome to pull up a chair and enjoy. This story is intended for an adult audience only.

Violence:
If it’s there I don’t remember right now. So how bad can it really be?

Language:
Yup. English, in case you were wondering. Oh, yeah, there are some naughty words sprinkled throughout the story to assure my quick entrance to hell should the sexual content fail to do the trick. If you don’t tell my mom, I won’t tell yours.

Acknowledgements:
To my beta readers, Midgit, Barbara Davies, and Judith Kuwatch – your assistance was invaluable. TN and Stephanie, your feedback helped make this a better story. Finally, Nene Adams lent a much appreciated helping hand with some historical information.

Dedication:
To the most underrated and awesome holiday of them all: Halloween. The one, lonely day each year when the line between the living and the dead blurs, when ghouls and goblins lurk in shadowy hiding places, just waiting for you to walk by, and when the chill that runs down your spine just might be
more
than the autumn breeze. Plus, you get those awesome bite-sized Snickers that contain absolutely zero calories and fat because THEY’RE BITE-SIZED. Do I really need to say more?

ECHOES
FROM
THE
MIST

No one in Scotland can escape from the past.
It is everywhere, haunting like a ghost.

O
LIVIA HAZELWOOD JUMPED down from the bus steps and was immediately greeted by a blast of cool fresh air. "At last," she muttered to herself as she drew in a deep, cleansing breath. The air in the double-decker coach had been chilly but stifling, filled with so much cigarette smoke she was sure she’d shortened her life by at least ten years on the all night drive from London to Edinburgh.

Liv stepped away from the parked vehicle to allow the other passengers to move past her. Each one was sticking their hands in their pockets for warmth as they waited for the driver to make his way around to the side of the bus and open the luggage bin. A pair of warm hands landed on her shoulders, and Liv spoke without turning around, identifying their owner through touch alone as her eyes sought out their bags. "Remind me why we did this again." A not-so-subtle twitch of her shoulders earned her a slightly exasperated chuckle and a brief, but satisfying, massage.

"Tsk. Such language from one of my elders."

"Hey!" Her green eyes flashed, but in good humor. "I won’t be thirty for a few more weeks, and that’s only…" She scowled as she calculated.
Seven years?
Ugh.
"Older, okay? Dougie told you to tease me about that, didn’t he?" She’d seen her teenage brother talking to Kayla in the airport before they left Washington, D.C., their heads tilted together in a conspiratorial fashion. "Tell me."

A worried look flickered across Kayla’s face. "I would never betray a confidence," she answered seriously.

Kayla’s tone instantly stopped Liv’s teasing. "I know you wouldn’t," she assured, patting the solid body next to her with a gentle hand.
I keep forgetting she doesn’t spend time around people very often. She doesn’t always realize when I’m playing… yet.
Liv glanced at her watch. "Looks like we’re going to make our morning meeting. Though I feel incredibly grungy and disgusting and might offend your client."

"Our client." Kayla leaned down and whispered in Liv’s ear, "And you always look beautiful."

Liv smiled and reached up to squeeze the long fingers still resting on her shoulder. "Flattery will get you everywhere, my dear." She yawned. "I still can’t believe all the early morning flights here were booked and their were no seats on the train."

Kayla sighed. "The airport construction isn’t helping. I tried to reschedule the meeting for this afternoon but… um… apparently our new client is leaving town today and doesn’t intend returning until we’re finished looking around and have some answers."

Liv swallowed. "He’s leaving because of something in the house?"

"Maybe," Kayla answered honestly. She was about to say more, when the driver carelessly tossed their bags on the ground in front of them. "Hey! Watch it. I have a camera in there."

The driver grumbled something obscene about yank tourists as he slammed shut the luggage bin and began marching up the street, intent on having his early morning cup of coffee in peace.

"Who does he think he’s calling a Yankee?" Kayla drawled. She grabbed both bags and handed the smaller one to Liv.

Wordlessly, both women unzipped their bags and pulled out sweatshirts and tugged them over their heads.

Liv yawned again. "I bet we get sick." She helped Kayla pull her long, dark hair free of the sweatshirt’s collar.

"Why would we go and do something stupid like that?" Kayla began edging her way towards the sidewalk, a tiny gleam in her eyes.

Liv shook her head. Despite spending the entire day before on a plane and all last night on the bus, her companion was in an excellent mood.
She’s so excited,
Liv thought fondly. To anyone else Kayla would have appeared her normal, reticent self. But in a very short time, Liv had grown quite adept at reading her tall lover.
Oh, yeah. She’s ready for another adventure.
"You’re so excited you’re about ready to wet your pants, aren’t you?"

Kayla’s mouth dropped open and she stopped moving so that Liv could move back alongside her. "I certainly am not."

"Really?" She gave her partner a dazzling smile.

Liv bit her lip and nodded. Working with Kayla researching the paranormal had sounded a lot less daunting when she was back home in the States and not about to face ghosts or spooks or whatever it was they could find. Now she wasn’t so sure she was up to the task.

Compassionately, Kayla gazed down at her. "It’ll be okay. Remember—"

"I know." Despite her underlying nervousness, Liv couldn’t suppress a grin. "Mostly good things happen in the dark." She began ticking off her fingers. "And in the morning. And afternoon. And outside. And in my truck. And on—"

A dark blush crept up Kayla’s neck and she glanced around. She lowered her voice. "Liv."

Kayla’s mind went blank for a long second before she remembered something Liv had said on the bus right before they arrived. "Why are we going to get sick?"

"Oh, yeah, because of the change in climates of course. That almost always gives me a cold. It’s still a gazillion degrees in Virginia, and we were only in London for a few hours but it already felt like fall there. And it’s got to be at least fifteen degrees colder here than in London."

Kayla wrapped her arm around Liv’s shoulder. "True." She smiled at the fair-haired woman’s pink cheeks and nose. "But I’ll keep you warm."

"I’m counting on it." Liv hoisted her bag onto her shoulder and pointed toward the crowd who had disembarked from the bus and were all marching up the street. "I take it we’re going to make like sheep and head this way?"

"Come on." Kayla gave Liv a gentle push. "We’ve got time for some breakfast before our meeting. Up ahead is Princess Street and I think Burger King will be open at this hour." She debated with herself for a moment before adding, "You should eat more, Liv. You didn’t eat dinner last night."

Liv’s hackles rose slightly but she knew that Kayla was right. "When I’m nervous I lose my appetite. I had a two Snickers on the bus at 2:00 a.m."

"Just as healthy as that burger you ate in London. Ever hear of mad cow disease?"

"Ha ha." But Kayla smiled inwardly when she felt the muscles under her hand begin to relax. "How about I tell you a little about what usually happens at these meetings, and then you won’t be so nervous?"

Liv wrapped her arm around Kayla’s waist and matched her stride to her companion’s. She could see a busker standing on the street corner far ahead of them, his bagpipes wailing out into the cool morning air. "It’s a deal."

"The Witchery, huh? Cool." Liv used the back of her hand to block the early afternoon sun as she glanced up at the beautiful sixteenth century building. They were at the gates of Edinburgh Castle at the very top of a downward-slanting street called the Royal Mile, home to dozens of pubs, historical buildings, and colorful shops selling tartans, pure butter shortbread, and souvenirs to eager tourists.

Kayla’s gaze flicked to the address she had jotted on a piece of scratch paper the day before, then back up at the restaurant. She closed her eyes. "Oh, shit."

Liv stepped closer to Kayla. "What’s the matter? Isn’t this the place?"

Just then, a woman in a green silk dress and heels walked out of the restaurant on the arm of a man in a tailored blue suit.

Liv’s eyes widened. "Oh, shit." She looked down at her own clothes. "‘Don’t worry,’ you told me. ‘We don’t need to change clothes or take a shower,’ you said." She groaned when another immaculately dressed woman exited the building.

I hate meetings.
But inwardly Kayla was pleased she didn’t have to dig out a suit and go to the trouble of pressing it and finding suitable shoes. "I could have sworn this address was for the pub across the street."

"Nope." On their trek to the restaurant they’d decided to stow their bags in lockers at Waverly station so they could wander the streets unencumbered. Kayla had sent her equipment and the rest of their luggage on ahead from Virginia but it wasn’t due to arrive until that afternoon. She wrapped her arm around Liv’s. "We’re next door to the castle, the biggest tourist attraction in the city. I’m sure this restaurant is just filled with slovenly dressed," she sniffed the air, "slightly ripe travelers."

The Visitor by Wick, Lori
Silent Joe by T. Jefferson Parker
His End Game (MMG #1) by R B Hilliard
Lady in Green by Barbara Metzger
Quick by Steve Worland
Little Earthquakes by Jennifer Weiner
I Hadn't Understood (9781609458980) by De Silva, Diego
The Chancellor Manuscript by Robert Ludlum
Her Teacher's Temptation by Vos, Alexandra
The Bay at Midnight by Diane Chamberlain
Our partner