Read Echoes of the Goddess: Tales of Terror and Wonder from the End of Time Online

Echoes of the Goddess: Tales of Terror and Wonder from the End of Time 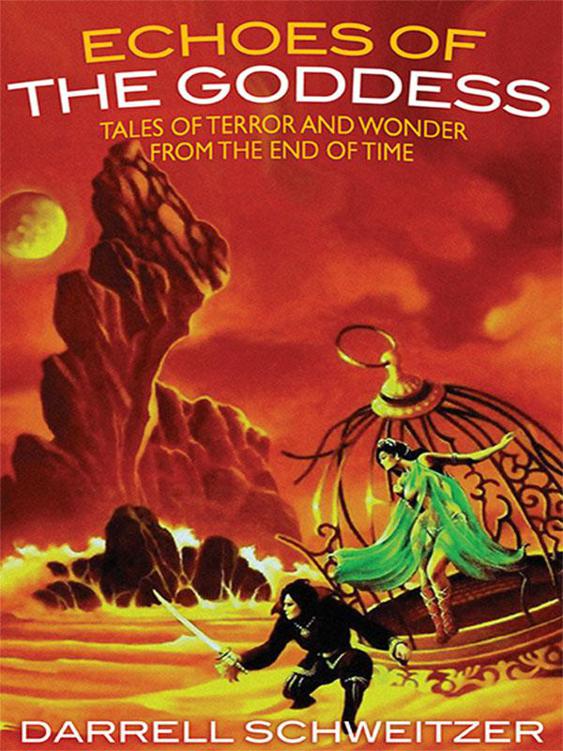 THE STONES WOULD WEEP

THE STORY OF A DADAR

A LANTERN MAKER OF AI HANLO

BETWEEN NIGHT AND MORNING

THE SHAPER OF ANIMALS

COMING OF AGE IN THE CITY OF THE GODDESS 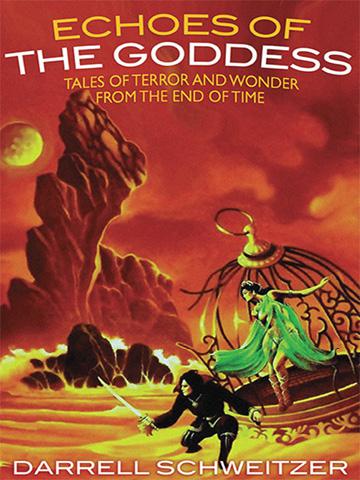 Echoes of the Goddess: Tales of Terror and Wonder from the End of Time

The Fantastic Horizon: Essays and Reviews

Ghosts of Past and Future: Selected Poetry

Speaking of the Fantastic III: Interviews with Science Fiction Writers

To Steve Behrends, whose enthusiasm, support, and nagging contributed substantially to bringing about this book’s existence.

“The Stolen Heart” originally appeared in
Weirdbook
#26. It has been revised for this book. Copyright © 1991, 2013 by Darrell Schweitzer.

“Between Night and Morning” originally appeared in
Weirdbook
#20. Copyright © 1985, 2013 by Darrell Schweitzer.

The Goddess is dead. The Earth is very old. The fabric of time itself has worn thin. Who knows what might be glimpsed through it?

At long last, she died. The Goddess of Earth, the Mother of Centuries, the dual mistress of dreams and nightmares, of the burning light and the impenetrable shadow,
died.

It was revealed. The prophets knew, but did not proclaim it. There was nothing left to prophesy, save that in some remote, unimaginable future, the godhead would be reborn yet again in a form too strange to be described, like a storm once more gathering strength out of dissipated winds.

But for now, in the interregnum, would be an age of random portents and incoherent miracles.

The priests knew, but kept silent. They heard the divine voice fading away like an echo in a vast cavern.

About this time a certain soldier was mustered out of the army in Ai Hanlo, the capital of the Holy Empire. Wasting his money in taverns, drunk, exhausted from one last debauch, feeling desperation in his soul, he wandered across the plains, into the hills, without seeming direction or purpose, without any goal except to seek rest, to find peace. In his nightmares, all those he had slain in battle pursued him, screaming, their red wounds gaping. He cried out in fear and awoke in darkness, amid the spray of winter rain, but even while he was awake, the dead men proclaimed the news to him, saying, “Our deaths are as nothing. Behold. Look up.”

And he looked up. The clouds parted, and he saw the Goddess falling across the sky, her hair trailing like a comet. To such an unworthy man as he, this vision came, while around him the ghosts of his enemies dissolved like soft clay in the rain.

The soldier abandoned his name, or perhaps forgot it, and lived namelessly until he felt himself worthy, and then assumed another name, Telechronos. Because he happened to dwell in the land of Hesh, he was called the Heshite, though even he no longer knew his exact origin. It was given to him to explain to mankind how, in the fullness of time, even the Goddess must perish, how the fragments of her divinity are scattered across the world like drifting ashes, some of them taking the forms we call the Bright Powers and the Dark, miraculous and dreadful yet not alive, like shadows that can speak.

He explained, too, why young men dream dreams and old men see visions, but the dreams and visions are without any intelligence or meaning, directionless, even if they are still holy.

For in the time of the death of the Goddess the worlds roll aimlessly in the dark spaces, without any hand to guide them. The Powers roam the earth and sky, working merely arbitrary wonders, leaving men to make what sense of them they may.

Let the many voices of these times speak.

Let the stories be written.

In the time of the death of the Goddess—

THE STONES WOULD WEEP

In the time of the death of the Goddess, there lived a boy named Ai Harad, who wanted to be a singer. He was the son of Thain, who had been a soldier, was himself the son of Scidhain, also a soldier, who had served in the Golden Legion of Ambrotae IV, the Guardian of the Bones of the Goddess. When the Goddess was yet living, the Harads had tilled the soil since time’s beginning.

But change was in the air. All things were in upheaval in the time of the death of the Goddess. Signs and wonders multiplied. It was whispered that soon men would be free from caste, no longer subservient to lords, that the world would be remade. Therefore Ain Harad aspired to be a singer.

Now when Thain saw his son grow to be slight and slender and not very tall, he knew that the boy would never bear arms. Therefore he put him to work in a field, minding a herd of goats. The days were long and lonely in that field. The goats only acknowledged Ain’s presence when he poked them with a stick, or stood up and shouted. Although beasts were said to have obtained the ability to speak in the aftermath of the Goddess’s passing, they never revealed the secret to him. He and they regarded one another with close-mouthed contempt and not a little boredom.

To fill the hours, Ain would play upon a kind of lyre, which he had made out of a shell and some string, and sing songs of his own devising. This was his true calling, as anyone who had ever heard him could attest, save for the goats, who offered no opinion. When he sang, he forgot all that was around him, and seemed in a different world. It was as if some fleeting, beautiful spirit possessed him. Perhaps one did. Those were unsettled times.

It was said that when he fell into his trance and played, even the stones would weep at the sound. It was said that the trees bowed down and the streams stopped following, pausing to listen. Many things were said in those days.

And it was also said, or at least observed, that when Ain was enraptured in his music and paid no attention to anything else, the goats would wander off in search of tastier pastures.

One evening in his fifteenth year, he came to himself again after playing, and there was not an animal in sight. He rose, put the lyre into the goatskin bag he wore over his shoulder, took up his staff, and set out patiently to round up his charges. One by one he found them, until he drove the mass of them before him up and down the dry, brown hillsides of Randelcainé, but by then he was far from home, and by the position of the Wolf as it swung around the bright star that was its eye, he knew the hour was very late. The sun would rise soon. Therefore he resolved to wait, and return home in the morning.

He brought the goats into a cave and set a fire at its mouth to keep the dread things of the night away. Then he took out his lyre again, and softly touched the strings, and sang a song about sailors drifting in an open boat on a wintry night. All are frozen to the oars, stiff, nearly dead as they sit. The darkness around them is impenetrable, the sea black, but flecked with foam-capped waves. The wind chills them to the very bone, until the sensations of land beneath one’s feet or the warm of a fire, seem impossible, half-forgotten dreams. But then a light appears, and brightens. It is a watchtower. The mariners take heart, the vessel leaps forward as if it had wings, and they reach the harbor and all are safe.

The goats huddled quietly as he sang. They had heard other versions of this one before, about men lost in the desert, about mountaineers, or the folk of Randelcainé venturing into the forbidding forests of the far north.

Ain looked out over the flat countryside to where the Endless River curved like a vast, gleaming serpent in the starlight. To the east, it passed through mountains beyond which he had never gone. To the west, it vanished in the horizon. Both the beginning and ending of the River were mysterious. He had once been told that it flowed in a circle, engirdling the world. He wondered about that dimly, but did not really care, save that someday he might make a song about it. He had a verse already:

return your waters, to where they sprang.

The Goddess made you, to bring us home.

Then, after a pause, he was moved to make another, different song. He scarcely had words for it, but he sang, and the words came. He sang of a longing for something more beautiful than anything on Earth, something to transcend human conceptions of beauty, and he wanted to be raised to this new level, to be reassured, to understand.