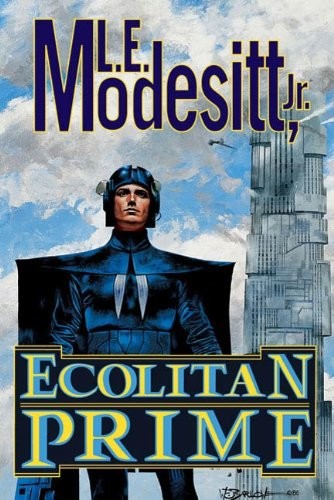 “The world-building is as solid as a rock. Altogether, the reappearance of these novels can only enhance the author’s high reputation for intelligent storytelling among readers familiar primarily with his recent fiction.”

“L. E. Modesitt, Jr., is a writer deeply concerned for the impact of humanity on the world. This concern shows clearly in fantasies such as
The Order War
and science fiction such as
The Ecologic Envoy.”

Praise for
The Ecolitan Enigma

“It is thoughtful, well written…an accurate and disturbing portrait of the dark side of humanity….
The Ecolitan Enigma
can be enjoyed as a first-rate political-adventure tale, as a continuation of the long-running SF conversation, or as an examination of human nature…. It’s an outstanding work, and I plan to reread it.”

“In this exciting SF adventure, Modesitt puts his characters through all the right paces, creating a rising tension that’s sure to keep action-oriented readers nailed straight through to the explosive conclusion.”

“Plot and characters are always intelligent, and the climax is thundering and action filled.”

Copyright infringement is against the law. If you believe the copy of this e-book you are reading infringes on the author’s copyright, please notify the publisher at:
us.macmillanusa.com/piracy
.
CONTENTS

gymnast, supporter, and daughter,
who liked this book from the first draft.

“You get what you can, and you call it honorable.”

“Trade is too important to be left to politicians.”

G. Wu-Reginald, Farewell Address to the S. A. Guild

“Trade and Commerce are merely another form of war. At least, the warriors admit their calling is war.”

“True trade is honest, but not merciful. Politics is dishonest, no matter how merciful…and war is neither honest nor merciful…therefore, choose trade above politics, but politics above war…”

T
HE NEEDLE-BOAT
blinked out into norm-space. Both high and low wave detector plates flared.

“Flame!” The pilot scanned the board, jabbed a series of control studs to put all energy radiating equipment into a passive mode, and waited for the picture to build on his screens.

Energy concentrations peaked around the fourth planet, Haversol, then spread to a standard picket line and deep warning net typical of an Empire operation.

Whaler’s fingers flickered over the control studs as he took in the information flowing from his receptors. While all the material would stay on tap for the Institute to dissect after his return, his own survival might depend on a nearly instantaneous understanding of the tactical pattern.

“Ten stans, max,” he muttered to the controls, eyes darting from screen to screen. The needle-boat itself was a single pilot craft, jammed with sophisticated sensors and communications equipment, and made possible only through a combination of thin hull, minimal support and backup systems, and overpowered drives.

At the upper left of the board in front of Whaler, a flat panel flashed amber twice, then settled into a steady glow. He touched the panel and listened to the direct feed of the Imperial comm net through his own implant.

The Imperial Fourth Fleet was obviously mopping up the scattered remnants of the Haversolan system defense forces.

The needle-boat pilot shook his head and touched the pale green panel to start the power-up for nullspace reentry.

The return coordinates for his out-space base flashed across the display. The Institute maintained its own forces independent of the Coordinate. So independently, thought the Ecolitan who was the needle-boat’s pilot, captain, and crew, that the government itself had no idea of the Institute’s strength.

“Sooner or later, they’ll need us again,” murmured the pilot. “Sooner, if this is any indication. Much sooner.”

Nathaniel Firstborne Whaler, sometime scholar and full-time practicing Ecolitan, automatically squared himself within his seat cocoon and cleared the board readouts, returning all the data to the coded master disc in the center of the boat.

As the bell chime sounded in his ears, Whaler tapped the sequencing plate, and the needle-boat vanished from the norm-space where the Imperial detectors had failed to notice the discrepancy in the energy levels that had been the only sign of its presence.

The Paler Shade of Autumn by Jacquie Underdown
Jesus by James Martin
The Syme Papers by Benjamin Markovits
Man-Eaters by Edgar Rice Burroughs
Coast Guard Sweetheart by Lisa Carter
Blood Law by Karin Tabke
The Teacher from Heck by R.L. Stine
The Band That Played On by Steve Turner
Bare It All by Lori Foster
Forty-Eight X by Barry Pollack
Our partner