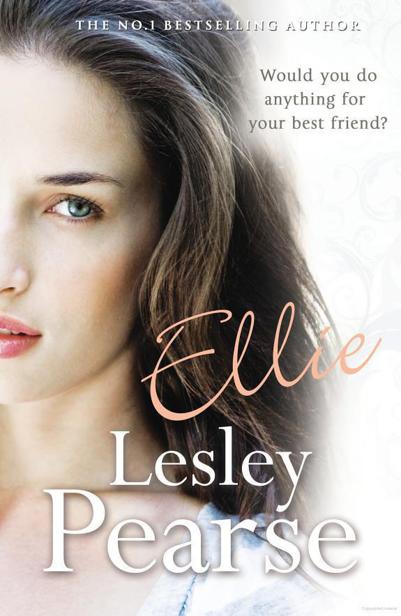 Ellie is a sweet-natured brunette, generous of heart with a sparkling smile and an accent which reveals her East End background. Bonny is beautiful and spoilt, with cascades of blonde hair, the brightest pair of blue eyes and a mouth like Cupid’s bow.

The two girls meet in London at the end of the war when, seduced by two American airmen, they pool their wits and resources and set off to make a living on the stage. Set against the hardship and austerity of post-war Britain, and the glamour and ruthlessness of life in variety theatre, their story is one of sacrifice and burning ambition. But most of all of a powerful friendship that lasts against all odds.

Lesley Pearse was born in Rochester, Kent, but has lived in Bristol for over twenty-five years. She has three daughters and a grandson. She is the bestselling author of nineteen novels, including
Ellie, Georgia, Tara, Camellia
and
Charity
, all five of which are published by Arrow. She is one of the UK’s best loved novelists with fans across the globe and sales of over three million copies of her books to date.

Till We Meet Again

For Hilda Sargent and Rowneen Phillips, two very different kinds of women, but both formative influences in my youth.

Hilda, my stepmother, was a tough old bird, but it was she who encouraged my love of books, taught me self-reliance and a great deal more. Rowneen was a friend’s mother, a lady who knew how to love, laugh and make the world a brighter place. Sadly they both died in 1995, within days of one another. I remember them with a smile.

Malcolm Golding for his brilliance with computers and his patience while he brought me into the twentieth century, and apologies to Sheelagh for making her a temporary grass widow.

Jack Hatt in Amberley, Sussex for his help in recreating the past glories of Amberley Station, and Mary Taylor in Rushington who gave me so much information about the war years in Sussex.

Finally, Peter Marsh for his knowledge of the fire service, and for his stoic endurance and help with my research while I lived, breathed and slept the war years.

‘’Ere, Poll! Your bleedin’ ‘Elayna’s broke the bog seat again,’ Edna shouted indignantly from the bottom of the stairs. ‘She might have a name like an effing duchess, but she don’t sit on the khazi like one.’

Polly Forester paused in searching her daughter’s long, dark brown hair for nits, and half smiled.

No one ever called Ellie by her real name, ‘Helena’ – which was intended to be pronounced in the Greek way, with an ‘a’ sound – not unless they wanted to tease or ridicule her. Edna Ross, their garrulous and often fearsome neighbour, loved to bawl it out as the ultimate, affectionate insult, always adding an extra ‘a’ or two for special effect.

‘’Ow can you be sure it weren’t Wilf?’ Polly shouted back good-naturedly. ‘’E’s got an arse like a rhinoceros!’

‘Don’t matter.’ Edna’s indignation was gone now, replaced by wheezy laughter. ‘Just tell our Ellie if she’s goin’ to live wiv toffs, she’s got to be’ave like one.’

It was four in the afternoon, August 31st, 1939. On any other warm day, Alder Street, Stepney would be ringing with the sound of children’s voices, skipping ropes thumping on the pavement, balls thudding against walls and women gossiping on their doorsteps. But an unnatural, eerie silence had fallen over the street in the last hour, as children were called in to prepare for evacuation tomorrow.

‘Ave I got nits?’ Ellie asked, wincing as her mother scraped the fine-toothed comb through her hair.

Ellie was described as ‘a big girl’ by her neighbours, a kindly euphemism for ‘fat’. At twelve she was almost as tall and several inches wider than her dainty mother. She escaped being labelled ‘plain’ simply because of her exuberant personality. Her dark eyes sparkled with ready laughter, wide mouth constantly curved into a smile, and she had the ability to make all those around her laugh too.

But anyone seeing Ellie straight-faced, without witnessing her infectious jollity, could be excused for considering her appearance unprepossessing. Black hair, a sallow big face, too fleshy to see if there might be interesting cheekbones beneath it, a nose too small to add any definition. In a worn, striped, cotton dress, long since outgrown, her puppy fat was all too apparent, buttons strained at the chest, sleeves tight, and the short skirt emphasising dimpled knees.

‘Can’t see any, ducks, but I’d best make certain,’ Polly replied, moving her daughter closer to the window for a better view. Ellie’s long, glossy hair was perhaps her best feature and it was a matter of pride to her mother to keep it that way. ‘We don’t want yer new uncle and auntie to think all us cockneys are lousy, do we?’

‘Can’t I stay with you, Mum?’ Ellie twisted her head so she could see her mother. ‘You’ll be so lonely all on your own.’

‘You must go.’ Polly’s mouth smiled but her eyes were bleak. ‘I’d rather be lonely than worrying about you being ’urt.’

Ellie desperately wanted to find some joke to lighten the mood, but for once nothing came to her. ‘I’ll be scared you might cop it,’ she blurted out. ‘Wot if one of them bombs gets you?’

Polly sighed deeply. All her thoughts were channelled into getting Ellie away to safety, drilling her on how to behave and making the most of this opportunity. Until now she hadn’t even considered the danger to herself.

‘There ain’t gonna be no bombs,’ Polly said with as much conviction as she could muster. ‘That’s just scaremongering to keep us on our toes.’

‘You ain’t scared then?’ Ellie slid her arms round her mother, leaning on her shoulder.

Ellie had never seen her mother scared. She might be small and slender but she could chase rats out of the outside lavatory with a broom, stand up to the often formidable actors and actresses at the Empire Theatre in Holborn where she worked as a dresser, and take Edna Ross in her stride.

‘Only of not seeing you each day.’ Polly hugged her daughter fiercely, fighting back tears. ‘But it’ll all be over by Christmas, you’ll see. Maybe I’ll be able to get a better place for us while you’re gone. Now get yer bits and bobs together and we’ll go up Auntie Marleen’s, she said you could ’ave a bath. She’s got some supper for us an’ all.’

This unexpected treat wiped out Ellie’s fears of separation. She disengaged herself from her mother’s arms, her customary wide smile splitting her face in two.

‘Wot, in that posh place? You said you wasn’t never going there!’

Marleen was Polly’s oldest and best friend, but from what Ellie had overheard, Marleen had a new fancy man her mother didn’t approve of, and until now she’d refused to take Ellie to see Marleen’s flat.

‘Even I can change my mind for summat special,’ Polly sniffed, turning her head away and wiping her damp eyes surreptitiously. ‘Besides, Marleen loves you and she’d be mad if she didn’t get to say goodbye.’

Polly sat down at the chair by the window as Ellie went into the bedroom to get ready. The forced gaiety she’d been keeping up all day was wearing thin. She was sending Ellie away for more than just her safety: Polly hoped a new home in the country would give her daughter all the things she couldn’t even dream of supplying. But for twelve years Ellie had been the centre of her world. How was she going to cope without her?

There was nothing in the small room to reassure Polly that she hadn’t failed her child. Two worn fireside chairs, a rag rug on bare boards, a small table with one leg supported by a wedge of cardboard, and on the mantelpiece, two plaster dogs with chipped ears flanking a clock which had long since stopped working. Just looking out of the window was enough to depress her further. The terraced street was so narrow, the sun rarely penetrated it. Soot-ingrained brick, so many windows broken and the panes replaced by cardboard or rags. Edna and Iris were gossiping in one patch of sunshine, headscarves tied over their curlers. Old Mrs Schoebl was sitting in her doorway, legs splayed wide, revealing an inch or two of long pink drawers, her head nodding sleepily down on to her chest. Normally the sound of children playing drowned the hum of sewing machines from the workshop at number 21, but now it filled the air like a swarm of bees. Two boys were sitting listlessly on the doorstep, their haircuts making them look like a couple of convicts. As Polly watched, Alf Meeks came into view, his rag-and-bone cart piled high with goods. Even his horse looked defeated, plodding wearily towards the yard further down Alder Street.

Polly was still a very pretty woman. Not even twelve years in Alder Street had dulled the shine in her coppery, naturally curly hair, or banished the poise and grace of the dancer she’d once been. Although she was thirty-seven, men still cast covetous glances at her trim figure, her upturned nose with its sprinkling of freckles, and wondered why the little widow hadn’t remarried.

She had moved into these two tiny rooms above Edna and Wilf Ross when Ellie was born, a desperate, temporary measure. She’d been optimistic then, believing the good times would come back, but before long she realised she was trapped, just as all her neighbours were. Jews, Poles, Irish and native Londoners, their customs and beliefs might vary, but poverty united them all. Whole families huddled in tiny, damp, squalid rooms, on a relentless treadmill of hard work for poor wages and no hope of anything better.

It was for Ellie’s sake that Polly hadn’t stopped trying to make the best of things. She’d learnt to live with the stink of the outside lavatory, the mess that Edna left in their shared kitchen. To eke out her meagre wages from the theatre she often prepared a meal for her daughter and pretended she’d eaten hers earlier, or put up with the cold all day and lit the fire only minutes before Ellie came in from school. Mice overran the house; there were bugs in the walls. In summer they stifled in the heat, but winters were an endurance test. Making pretty curtains didn’t disguise the mould growing on the walls, or the rickety furniture. Only Ellie’s presence made it a home.