EllRay Jakes and the Beanstalk (6 page)

“Slide! Slide your foot, fool,” I can hear probably-well-dressed Fly yelling to Henry as Alfie and I walk down the Pendletons' driveway. I hear Henry's skateboard crash as it hits the ground.

“He's
stwict
,” Alfie says, her voice hushed, and suddenly she is holding my hand.

“Stwict” probably means “strict” in Alfie-speak. I'm not sure about that one.

She wanted to come with me, but now she's scared? “You can always go back home,” I tell her. If I'm lucky, Alfie might think it's her own idea.

“Hey, little
dude
! And little dude's little sister,” Fly calls out, greeting us as though it's his house, not Henry's.

“Her name's Alfie,” I say to Fly. “She wanted to come,” I tell Henry in a quiet, I'm-sorry way, but Henry is busy picking himself up off the driveway and then chasing after what looks to me like a new board.

He is wearing lots of layers of clothes today, I noticeâto cut down on road rash and bruises, I guess. Or to hide them from his mom.

“It's okay about Alfie,” Henry finally says. “I almost did it. I almost ollied!”

“Not very
well
,” Fly points out, adjusting his red-and-navy sweatshirt just so.

He is a pretty cool dresser, I have to admit. And he knows it. It's like his clothes point out what a great skater he is, too, because a bad skater would have torn pants, and rips everywhere else.

But no clothes-destroying speed wobbles or rocks in the road for Fly Reilly.

“It wasn't perfect, but almost,” Henry says, mostly to me, after getting a drink from the dribbling hose coiled on the soggy patch of lawn next to the driveway's turnaround area. He wipes his mouth on his sleeve and slips me a shy, proud smile.

“You gotta remember, skating's not just a sport,” Fly says, sounding important. “It's a
way of life
. So âalmost' doing something doesn't cut it, dude. You have to do it perfect. Is that food?” he asks, jumping to another subject as he nods his chin toward the bag in my hands.

“Yeah. I decided to bring some snacks,” I say, shrugging like it was my own idea, not Fly's commandâand hoping Mom won't notice the missing cookies, chips, and leftover burritos.

I'll deal with that when I have to. But it was for a good cause, I'll tell herâso I wouldn't get pounded by Fly Reilly, the bad choice kid.

Who I'm not even supposed to be seeing anymore.

“Next time, bring food and
money
,” Fly tells me. “For plywood. Or else you can't hang with us. You gotta pay to play, little dude.”

“Come
on
, Fly,” Henry says, sounding just about fed up.

But Fly doesn't even notice. Instead, he points at Alfie. “She can sit over there on the stairs, and hold the food until later,” he says, like it's a royal decree. “Don't eat anything,” he commands her.

I mean, I'm not exactly thrilled that Alfie made me bring her along, but she is a person. She has a name.

“Hold Henry's old board, while you're at it,” Fly tells Alfie, who has settled herself like a golden princess on the topmost step leading to the Pendletons' kitchen, the bulging bag of snacks at her side. I guess she's happy as long as she can watch her idol Henry Pendleton, because she's quiet, for once.

Fly hands her Henry's old boardâwhich is still better than my new-old board, but never mindâand hunkers down on a lower step to eyeball Henry and me.

“Now you try,” Henry tells me in an encouraging way. “Just remember. Crouch, push down with your back foot, then slide your front foot to level out. That's the part I keep forgetting. And land with your knees bent. I guess you just have to mess up a few hundred times before you can get your board into the air without barely thinking about it. So you might as well get started.”

“I learned much faster than that,” Fly calls out, like he's arguing with Henry.

Well, maybe Fly
did
learn fast, I think, crouching on my bashed-up board. And maybe he didn't. He doesn't exactly seem like the kind of guy who tells the truth every day of the week. Or even once a week.

And he's eleven years old, not eight, like me. No wonder he's a better skater!

I crouch, then move my right foot back until the board tilts up, then I try to slide my left foot forward so I can get some air and make the board come down flat, with that perfect skateboard
bang
that sounds so cool.

Instead,
I
come down flatâon the driveway.

“Here, look,” Henry says as he helps me up. And he steps onto his new board to show me what he's learned.

“No,
you
guys look,” Fly calls out in a funny voice, and Henry and I turn our heads toward the tile steps in what feels like
SLOW MOTION
. It's like we know we're going to see something bad.

Fly is holding my little sister's hand to balance her. She is teetering at a weird angle on the Pendletons' top stepâon Henry's old board.

This means she is pointing downhill, of course.
Seriously
downhill. 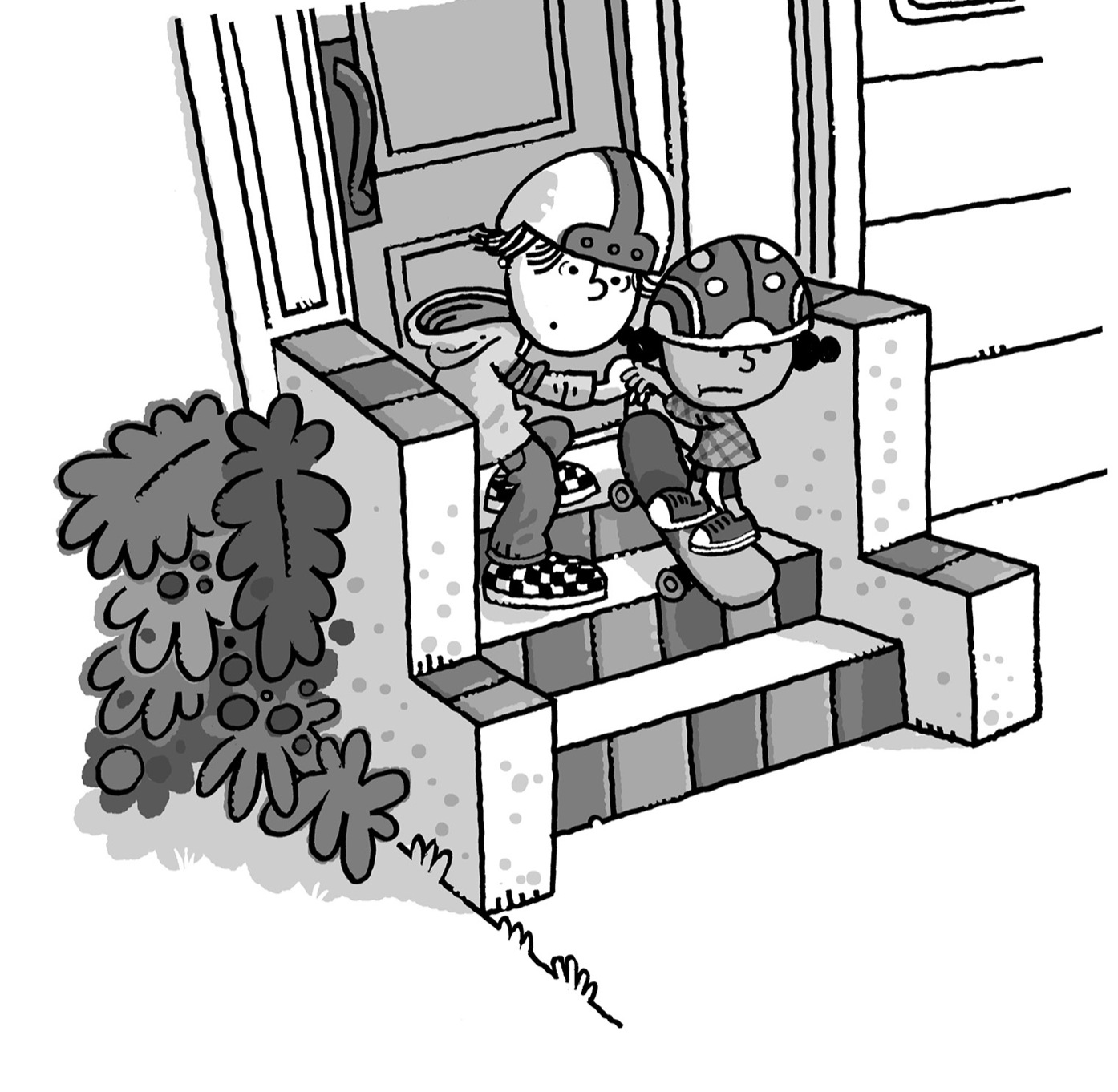 So this was Alfie's big secret!

On her head, she is wearing her bike helmet. I didn't even see Alfie bring it with her.

On her faceâher
perfect
face, without even a scratch on itâI can see different feelings battling for first place.

Happiness
, because she has totally surprised me.

Excitement
at the idea of skating better than me, like Fly said he'd teach her to do.

Fear
, because she suddenly realizes where she is, and what's about to happen.

My ears are buzzing, I'm so scared for her.

I can't figure out the expression on Fly's face at all. He looks kind ofâblank.

“It's âsink or swim,' see,” Fly pretend-explains to Henry and me. “If she falls, so be it. If she doesn't, by the time she gets to the bottom she'll be a skater.”

“Let go, kid,” Fly shouts at Alfie, who is clutching at him now with both hands. It looks like she's about to jump into his arms.

“EllWay! Help!” Alfie cries, and then Fly untangles her hands from his. And he gives her a shove down the tile stairsâon Henry's old boardâin almost the very same movement. 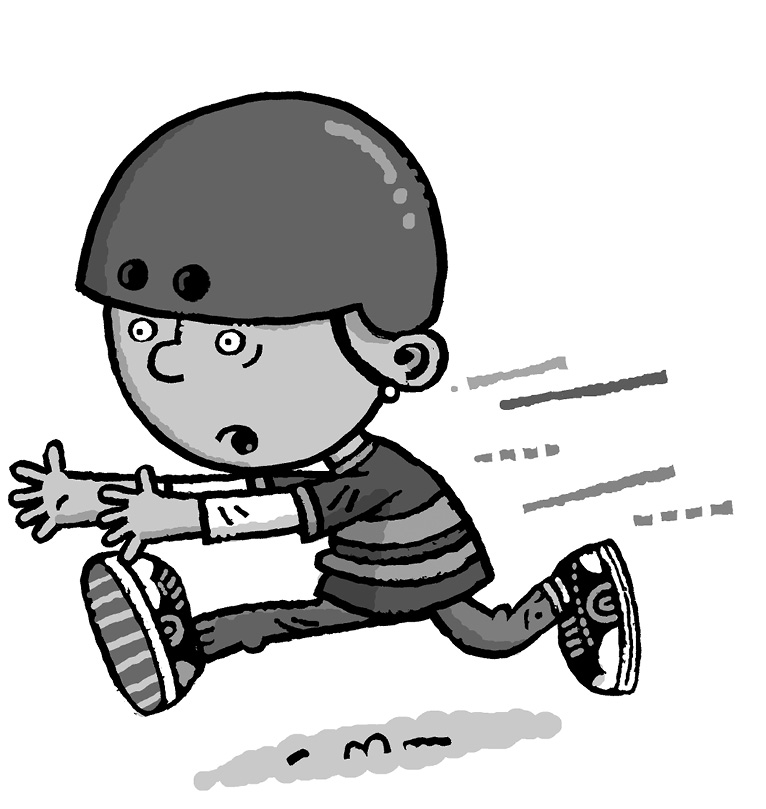 But I am already
FLYING
through the air.

I hurl myself onto the driveway and skid the rest of the way to break her fall.

“Waah!”
I hear Alfie cry as she bounces off me and the board skitters on its back across the turnaround toward Henry, as if he was calling it home.

But the cry is Alfie's scared-mad “What just happened?” wail, not the “I'm hurt!” one.

I
am
hurt, I realize, lying facedown on the cement. I did not come to Henry's today prepared to be a stuntmanâor even to do any serious tricks. I was just going to try to get an inch closer to doing an ollie. So I was wearing the opposite of the clothes needed for a driveway skid.

My cheek and arms feel hot and wet, and they're starting to sting, and my knee hurts.

I feel something patter onto my back, and I lift my head to see coins bounce to the ground. Three nickels and a dime. “There you go, girl,” Fly's voice says from somewhere to the right of me.

“Her name's Alfie,” I mumble into the cement.

There's blood in my mouth. I must have bitten my lip or my cheek.

Yeah, Fly has a problem. But I no longer care what Fly's problem is.

“You said you'd give me a
quarter
if I did what you said,” Alfie yells between gulping sobs. “You big liar!”

“What a dope,” Fly says, but even he is starting to sound a little nervous. “Little dude's little sister can't even count money yet,” he tells Henry.

“It's not my fault she slammed,” Fly objects, which is a lie if I ever heard one, because this was
totally
his fault. “And don't âdude' me, poser,” he continues, trying to turn Henry's anger around like a 180-kickflip. “You guys are
both
a couple of posers, in fact. I don't know why I ever botheredâ”

But he doesn't get the chance to finish his sentence, because I'm upâand on him.

“
Raahhh!
” I bellow, hoping that this noise, plus the surprise of my attack, will make up for what I lack in size and strength.

I manage to knock him over, at leastâlike a small lumberjack cutting down a very tall tree.

As I said before, Fly is halfway between me and Henry in heightâ
and
he's three years older than I am,
and
his scrapes, bad choices, and general troubled kid-ness means that I'm
DOOMED
.

But I don't care.

He tried to hurt Alfie.
And I'm the one who brought her over here.

“You're the poser,” I yell, starting to pound his shoulder with what passes for my fist. “You're posing as a human being!”

I feel like an ant trying to battle a tarantula.

My surprise advantage has been over for about ten seconds, and Fly realizes it. He looks like he's getting ready to enjoy himself.

Fly looms over me like a giant, smiling at last. His right arm goes back for a major punch, so I duck my head and wrap myself around him like I'm made out of the strongest glue in the world, and I start to roll with himâtoward the muddy patch of lawn.

“EllWay!” I hear Alfie crying from what seems like far away.

“Get off him before he hurts you, EllRay,” Henry shouts, running over to us. And, to Fly, “Dude, get a gripâyou're twice his size!” 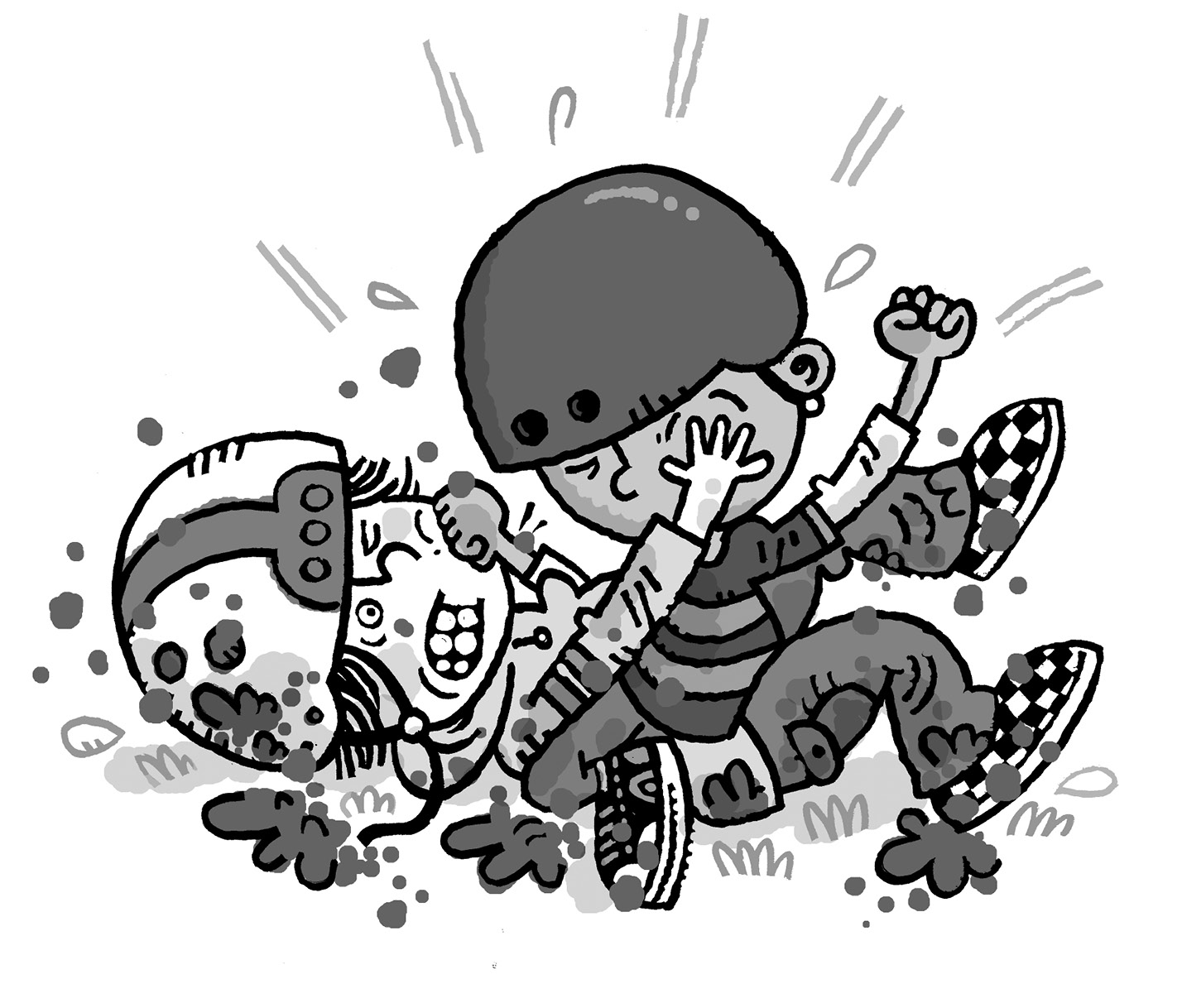 “Iâdon'tâcare,” Fly yells, trying his best to get far enough away from me to hit me. But I hang on tight.

And I keep rolling us toward the mud.

“If you get blood on my clothes you are going to be so sorry,” Fly mutters in my ear, almost growling.

“Then I'll get blood
allâoverâthem
,” I say, panting out the words. “And your clothes will be wrecked, and then everyone will know what a coward you are!”

This makes absolutely no sense at all, because clothes can't talk. But I'm glad I said it.

He
is
a coward. Not for fighting me, but for putting Alfie in danger.

AndâFly and I are on the lawn.

The
MUDDY
lawn, where the hose has been dribbling the whole time Alfie and I have been here today.

And what a great idea coming over here was, I congratulate myself, managing some inner sarcasm as I grind a fist into where I guess Fly's ribs might be.

“Dude!
Mud!
” Fly cries when he realizes where we are. He tries to lift his bodyâ
our
bodiesâoff the ground, like he thinks maybe he can float in the air if he just tries hard enough.

This guy is seriously messed up.

“Not so fly now, huh?” I say,
SMOOSHING
his perfect red-and-navy sweatshirt back and forth in the mud as I thrash the two of us around really good.

“But I'm supposed to go out to dinner with my aunties,” he shouts, like I care. “And this sweatshirt is new!”

“Not anymore, it's not,” I somehow manage to say, and I scoop up a handful of the mud and plant it smack on his face.

“Okay, that's
it
,” Fly yells through the mud, and he reaches for my neck with both hands. “You're gonna be sorry, kid. Because I'm gonnaâ”

“Fly Reilly and EllRay Jakes,” a grown-up's voice calls out.