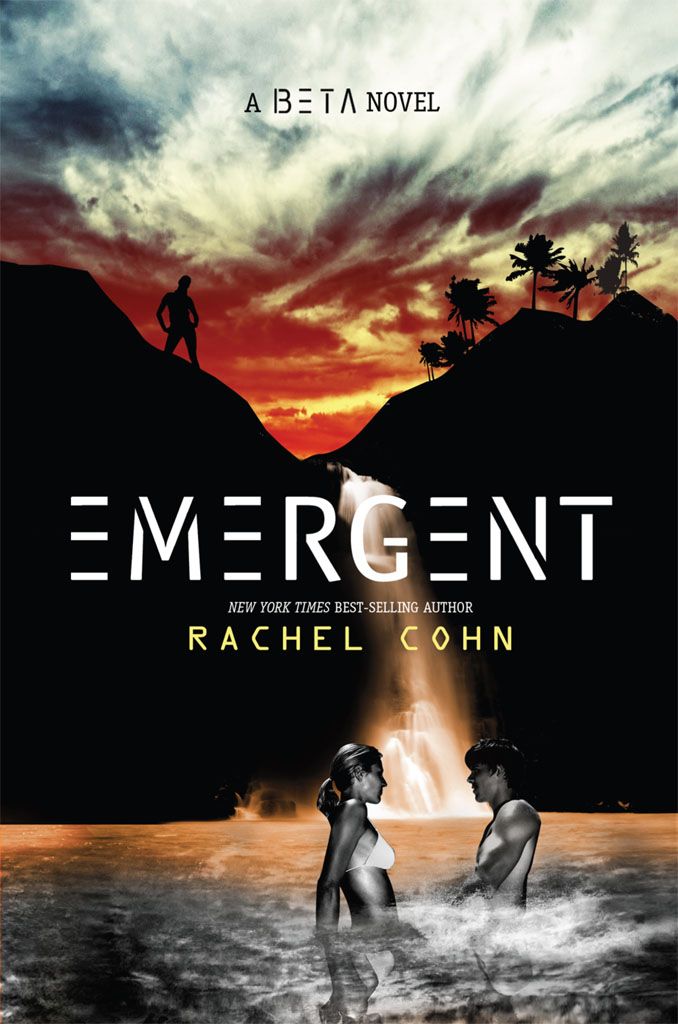 All rights reserved. Published by Hyperion, an imprint of Disney Book Group. No part of this book may be reproduced or transmitted in any form or by any means, electronic or mechanical, including photocopying, recording, or by any information storage and retrieval system, without written permission from the publisher. For information address Hyperion, 125 West End Avenue, New York, New York 10023.

For Emily (the Saint)

We chant these words while drumming our fists on the sailboat’s floor as we sunbathe on the deck, waiting for some weather to happen. I’ve known my fellow runaways for less than a
day, but we’re already tight enough to summon a suicide pact.

Reggie, Holly, and I are big fakes. Our death party is not really a suicide pact. It’s a romp, a dare, the name we’ve given our adventure to reach the legendary Demesne—where
only the dead are allowed entry without prior invitation, so they can be recycled into clone slaves. The richest people in the world, who own the hideaway of Demesne, restrict human access to their
hallowed island to only their invited guests. Three runaway juvenile delinquents with a crazy dream to see Demesne would never reach that destination as invited guests. But we’ll risk high
seas and whatever else happens to try gaining access. Fun!

In Cerulea, where we come from, the sun and heat are relentless. The only interesting “weather” we get there is when yet another brush fire in the hills sends plumes of black smoke
over our town, and our water supply is turned off for a day or two to redirect the scarce resource toward the fires. The fires happen so often, they’re not even catastrophes. They’re
just more destruction—but less hardship, we’re constantly reminded by our parents, than what their generation experienced.

As the sun blazes down from a cloudless blue sky over our idle spot, somewhere in the ocean within the Demesne archipelago, my fellow runaways and I chant, we taunt, we beg:
“Death
par-ty!”

“What’d you guys get sent to the camp for?” Reggie asks Holly and me. Recounting crimes and misdemeanors: always a great conversation starter.

“Vandalizing a desalinization plant,” says Holly. “It was just some cool-looking graffiti. I still don’t see what the big deal was. It’s not like I blew the place
up.”

Reggie says, “Old people who grew up during the Water Wars get way too possessive and freaked out over their precious liquid resource.”

Holly says, “I didn’t realize the building was so high-security and whatever. It was ugly and sterile. I thought it needed some color. And some artfully painted penis clown
faces.”

Reggie busts out laughing. “That was you? I saw it from the other side of the fence as the security team was cleaning it up. Great work!”

“Thanks,” Holly says. “Sadly, the judge didn’t appreciate my creative vision. He sent me to the camp for rehabilitation. What about you guys?”

Reggie says, “I stole a dune rider and went joyriding.”

Reggie adds, “I stole it off the grounds of the Base.”

“My dad’s a drill sergeant on the Base,” I say.
He cares way more about the Universal Military than he does about me
, I don’t say. “You’re lucky you
only got sent to troubled-teen wilderness camp. It could have been prison.”

“It should have been,” says Reggie. “But my mom’s a lieutenant colonel in the Uni-Mil. How’d ya think I got on the Base, anyway? She begged the judge for leniency.
What was your crime, Zhara?”

“’Raxia addiction!” I say, and we all laugh. For the ancient Greeks,
ataraxia
was a word meaning sublime tranquility, freedom from stress and worry. ’Raxia is the
modern word for the pill that provides that same feeling. Tingles of sweet, calm awesome.

My reply is funny, but also true. My dad’s solution to dealing with a teenage daughter with a drug problem was to send her away rather than deal with her. He knew I couldn’t resist
the offer: either be kicked out of the house, or kick the habit at the wilderness camp.
It’s near Demesne.
Dad knew if he dangled that word, I’d go without resistance. Even
though the camp’s island location was pretty far from the paradise island of Demesne, it was the closest I could probably ever hope to get.

When I was little, my mother used to put me to sleep with a lullaby she made up about Demesne.

I dream of Deh-mez-nay, the harsh world so far away.

I dream of Deh-mez-nay, the heaven where Zhara and I will stay.

Our home back then was strewn with pictures and paintings of Demesne: its violet sea, its emerald mountains, its luxury homes built for the richest people in the world. The
images were so prominently displayed throughout the house, I think I was four before I realized we didn’t actually live on Demesne.
Our starved world needs to be reminded of beauty
,
Mom would say every time Dad protested a new Demesne-themed house decoration: violet-painted bedroom walls, fake palm trees in the living room, a secondhand oxygen machine to pump her tiny craft
room with a knock-off version of the premium air experienced everywhere on the real island of Demesne.
Why shouldn’t paradise be for everyone?
Mom always asked.

I guess Mom got tired of waiting for Dad to share her enthusiasm for escaping to paradise. Mom left us when I was eight and died a year later, but I never stopped hoping to get to Demesne, for
her.

Only yesterday, I met Reggie and Holly for the first time at camp orientation, and I invited them to run away with me. I suggested we steal a sailboat in the dead of night and set sail for
Demesne. The ’raxia I had secreted away in my duffel bag was all the incentive they needed. We knew we’d never be allowed into Demesne even if by some miracle we did get there. But why
not have fun trying to crash that island’s exclusive rich-people party?

“For serious,” says Holly, pointing upward to the sky.

The change in the sky is so sudden, it’s like day has immediately turned to night. Gone are the cloudless blue sky and blazing sun, replaced by a dark gray sky peppered with billowing
purple clouds swirled in magenta tones. None of the pictures I’ve seen do them justice. These clouds are the signature runoff from Demesne’s protected sphere. The private island of the
world’s wealthiest people is bioengineered for perfection, offering its residents supreme luxury and tranquility. The side effect is that the wider area of the Demesne archipelago is cursed
with the accumulated bad weather that is diverted away from the exclusive island. The volatile weather systems that are pushed back from Demesne to keep it safe and serene bind together outside the
island’s “ring” to create monster storms that wreak havoc across the rest of the archipelago. The magical-looking toxic clouds are the picturesque bonus.

“Those clouds are freaking insane with the amazing,” Holly whispers.

A light rain starts to shower our bodies, and it’s weird—the rain is warm, and feels almost sweet, like drops of lavender candy.

“Best death party ever,” I murmur, loving the rich purple-magenta swirls in the sky and the soothing, warm wetness on my skin. This is what toxic-magic rain feels like! Gorgeous.

Then the sea below us begins to angrily churn, quickly turning to a roar, and we fall silent. No more small talk. We’re too stunned, and too baked, to react. We barely know how to sail a
boat, much less in a storm. There’s no time to panic, because immediately the wind picks up, and the rain turns to sharp hail that pellets our skin like knife blades. This is not nice rain
anymore.

We scream, but there’s no way for us to take cover. Within seconds, the boat lists so violently that we can barely hold on to the rails. A wave several stories tall approaches, raising the
boat up like a roller coaster, then crashing it back down. The boat tilts over, throwing our bodies into the bitter, violent sea.

I see nothing but gray, churning ocean as I tumble below the surface, desperately trying to hold my breath in before my lungs rapidly fill with water. I need light from the surface to guide my
way up, but there is none, probably because I don’t deserve the help. I didn’t earn it, as Dad used to remind me after failed dives. But not for nothing am I an Olympic-diving-training
dropout; somehow, my body goes on autopilot, and I manage to swim up to the surface even without light to guide me. I grab on to the rope ladder at the side of the boat, gasping for air. I climb
back onto the boat, hoping to find Reggie and Holly there. I see them in the water on the other side of the boat. The current thrashes them, and their arms flail as they try not to drown. I look
around frantically for life vests. I see them on the other side of the boat and race across to grab them. Just as I toss the vests overboard to Reggie and Holly, another wave breaks across the
boat.

This time, the water’s assault is enough to kill me.

Even in death, I feel cheated. Where’s
my
freaking white light? My heartbeat has slowed to a near stop. I should be on my way to the sweet afterlife. But all I get is pitch-black
darkness, an unending abyss I try to swim through, dive through, cajole into light, and beg for clarity.

This netherworld must be my punishment for the death party. It’s my punishment for being such a terrible daughter. It’s vengeance on the hellbeast—my dad’s name for me,
announcing his disappointment that my headstrong nature continually gets in the way of his hopes for me. I’ve shamed myself and shamed my father. I can never go home after what I’ve
done. I’ve died—and taken two other runaways with me, at my invitation.

Fire In The Blood (Shards Of A Broken Sword Book 2) by Gingell, W.R.
Lawked Flame by Erosa Knowles
Garden of the Gods (The Immortals Series Book 3) by S.M. Schmitz
Storm Warning by Mercedes Lackey
Rescued By a Lady's Love (Lords of Honor, #3) by Christi Caldwell
The Reunion by Jennifer Haymore
The Lost Tycoon by Melody Anne
Tidal Wave by Arend, Vivian
Naughty Nine Tales of Christmas Crime by Steve Hockensmith
Loyalty: A Dragon Shifter Menage Serial (Seeking Her Mates Book 4) by Carina Wilder
Our partner