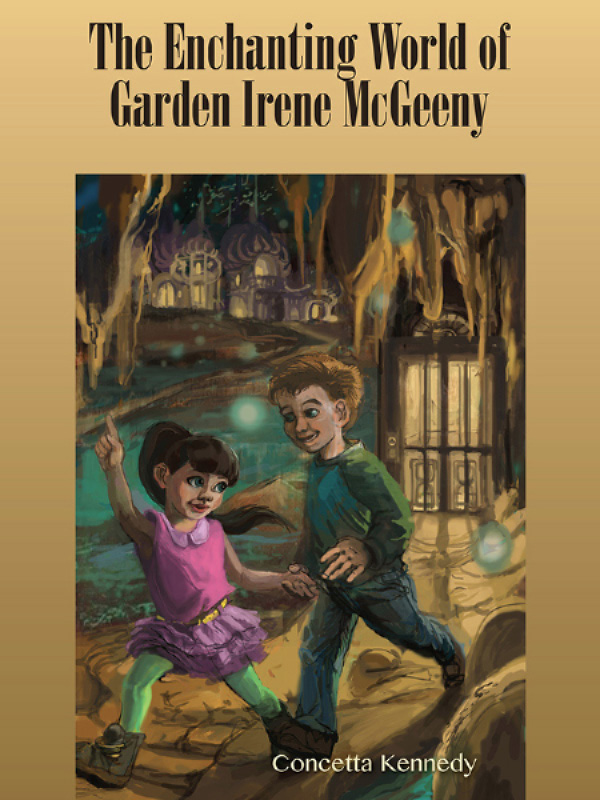 No part of this book may be reproduced in any form or by any means, electronic, mechanical, digital, photocopying, or recording, except for the inclusion in a review, without permission in writing from the publisher.

This is a work of fiction. All of the characters, names, incidents, organizations, and dialogue in this novel are either the products of the author's imagination or are used fictitiously.

Published in the United States by BQB Publishing

This book is dedicated to my family. These beings, the loves of my life, have fulfilled my most precious moments in the past, in my present, and in all I look forward to in my future: my husband, Arthur Kennedy; my children, Karla, Krista, and Kurtis; and our beautiful grandchildren, Addison, Rhiannon, Olyvia, Owyn, Noah, Karina Grace, and Kiera Rose.

It was nearly lunchtime, but everyone forgot how hungry they were when Garden Irene McGeeny said it: “I live in an underground castle.”

Mrs. Fitzpatrick was summing up a Social Studies chapter about types of homes people live in, but every student looked to Garden Irene, the new student. She said it in a very clear voice. There was no mistaking what she said.

Everyone, including Mrs. Fitzpatrick, didn't know whether to be stunned by Garden's outburst of personal information, or whether to laugh and tell her to “get real.”

Garden was a quiet girl who had just moved to the area with her family. The McGeeny family name was renowned in Frostburg, but they were Garden Irene's grandparents and aunts and uncles.

Her father, Padrick McGeeny, had moved out of the area to go to college, never to return until now. He was an architect, and took a job with a new architectural firm that moved into town. The mother company was in Chicago, Illinois, and one of its branches was located in Frostburg. 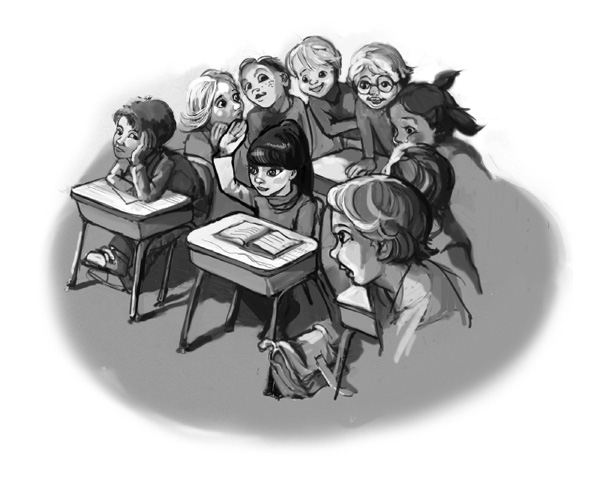 Mrs. Fitzpatrick asked Garden to repeat what she had said. Garden Irene very seriously repeated it. Everyone guffawed in disbelief.

Peter Pranston blurted, “I know where you live, Garden Irene, and it isn't a castle.”

Garden retaliated with, “I told you it was underground.”

Peter Pranston was one of the smartest boys in the classroom, and Mrs. Fitzpatrick was used to him speaking out his feelings on a whim. They had become friends right away because he liked her story of how she came to town, and he could tell that he had met his match in intelligence. He knew that Garden Irene was going to be a great new friend.

It was still early fall, so none of the girls had actually gotten to know Garden Irene well enough yet to ask her to their homes, or for her to do likewise. Mrs. Fitzpatrick was doing some fast thinking as Garden's words hung in the air because she didn't want to give anyone the chance to laugh at Garden and her wild idea. Yet, Mrs. Fitzpatrick, too, found it mighty hard to swallow.

Peter interrupted Mrs. Fitzpatrick's thoughts with another outburst. “Garden Irene, you live in that really tiny house at the bottom of Pleasant Street hill.”

Garden Irene never flinched. She always seemed forthright and sure of herself. “Oh, Daddy built that long before we moved here, so we would have a decent and safe way to enter the castle.”

“Wait a minute! First you said that you live in an underground castle. Now you say you have a little house to get to the big underground castle?” Paul Dyne questioned from another row of desks. “Wow! That's awesome! Can we come and see it?”

Everyone chimed in, “Yeah!”

The lunch bell rang. The students were so immersed in their own imaginary thoughts of an underground castle, that even Mrs. Fitzpatrick forgot the time. In unison, everyone groaned, as if the topic was far too important to be interrupted by the intrusion of lunch.

At Mrs. Fitzpatrick's command, the students who were buying their lunch filed out, followed by the ones who carried their lunch. The line was perfectly quiet. The students were no doubt mesmerized by the thought of a castle for a home.

At lunch, the children could not be bothered by their usual stories that made loud annoying chatter in the lunch room; now they were delirious with exaggerated ideas about Garden Irene's underground castle.

On the students' return from lunch, Mrs. Fitzpatrick said, “I know you all want to finish our discussion in social studies, but we must now move on to English and math. We have state exams for which to prepare.”

The students suppressed their groans at this disappointing news, but Mrs. Fitzpatrick bribed them into working studiously that afternoon. Later, before they went home, she promised them she would give them a chance to question Garden Irene about her home, or castle, or whatever it was where she lived.

Mrs. Fitzpatrick worked the students hard until just five minutes before quitting time. It was Billy Bonds who blurted out, “It's five minutes to three!”

The class felt cheated when they realized how little time they had with Garden Irene compared to how hard they had worked for Mrs. Fitzpatrick. The teacher was truly sorry for the oversight about watching the time and told them she would make it up to them.

Phyllis Mixer raised her hand and said, “Mrs. Fitzpatrick, why don't we start out tomorrow morning with us asking Garden Irene about her underground castle?”

Tatum Quaker chimed in, “Yeah! That would be so fun.”

Pen Brown said, “You promised, Mrs. Fitzpatrick, and now we have to wait. I need to see this place Garden Irene is talking about. I mean, she must be crazy!”

Mrs. Fitzpatrick quickly replied, “Pen, it's not necessary to talk that way. Until we know what Garden Irene has to tell us, we should not be judging like that. Anyway, I suppose we could change our morning ritual and start tomorrow out by asking Garden Irene some questions. Garden, is this plan okay with you?”

Garden just sat there in her seat, stunned. Without a word, she nodded in agreement.

Just before Garden Irene left the room to board her bus, Mrs. Fitzpatrick slipped an envelope to her. “Give this to your parents, Garden Irene.”

Garden Irene glanced at the envelope and quickly nodded. “I will!” With that, she ran off in haste for fear of missing her bus.

The bus ride home was the longest Garden Irene could ever remember. She soaked her thoughts in the note Mrs. Fitzpatrick had placed in her backpack. Garden Irene sat alone, so she had no one to interrupt her deepest thoughts.

Ellen Hooks and Gloria Eaton were sitting directly behind her, and even though they had talked about Garden Irene and her crazy castle story, she never heard their loud whispers. Garden Irene sat just short of being seen by anyone except those sitting in the seat beside her. She was just so small.

Garden Irene was petite in every way, from her tiny face, sometimes adorned with glasses that she wore only for reading, to her little feet that often made good bait for jokes. The only part of her that wasn't small, or short, or in any way diminished, was her long, thick, flowing black tresses. Her hair was the envy of every girl. It was perfect. It had a shine like no boy had ever seen on any other girl in the classroom, or anywhere else, for that matter.

Garden's hair was mid-back length, and styled to suit her every mood. If Garden Irene felt sad, she had her hair tied low at the nape of her neck. If she was happy and full of spunk, she'd have that ponytail high on her head, bouncing to the rhythm of her happy feet.

Even though no one really knew Garden Irene, they all caught her exhilarating, electrifying moods, whatever they might be. It was almost like a virus; if Garden Irene was happy, everyone had a happy day. If Garden Irene was quiet and sad, Mrs. Fitzpatrick felt as though someone had died or lost her best friend.

Garden Irene was the first to get on Mr. Harvey's bus in the morning and the last to leave the bus after school, so only Mr. Harvey could see the small, modest house that she walked to and from every day. In fact, Mr. Harvey had noticed at the beginning of the school year how very small her house was. He had thought to himself that he could never live in a house that size with just him and his wife, let alone with a child.

Every day Garden Irene was adorned in new clothes, so that made the bus driver think about her small house and where in the world all her lovely clothes were kept. The little house couldn't possibly have more than one closet.

Garden Irene didn't eat much supper that night when she got home, and although Mr. and Mrs. McGeeny had lots to say about the day's happenings, they noticed how little she said that evening. During one quiet moment, her dad glanced at her mom, smiled, and said, “Garden Irene, what did you talk about in school today?”

She said, “Well, in English we were each making up a story about our own make-believe animal.”

“Anything else, or is that all you did all day?” her dad asked.

“No, we did lots of things. We're doing horrible story problems in math,” was Garden Irene's response.

“What about social studies?” asked her mom.

Garden Irene didn't say anything for quite a few minutes.

Now both her mom and dad were puzzled. “Garden, what about social studies?” repeated her dad.

“We're talking about the types of homes people live in,” replied Garden Irene. “I told them.” Not a sound was heard. And then, she said, “I thought it was another interesting type of dwelling, so I told them.”

Garden's parents were very still. They looked at each other, then without allowing his anger to show forth, her dad took over, as was the usual custom in their household. “Garden Irene,” he began, “this is something we've talked about before.”

Garden's head hung low as she realized the disappointment conveyed in her parents' expressions. She'd broken the special trust that they had always had between them. She wondered if they would forgive her or ever trust her again.

Garden's dad continued. “Make no mention of our home again. Is this clear?”

Garden's weak nod made them realize how hurt she was. However, Mr. and Mrs. McGeeny were also aware that Garden Irene had no idea what this could mean for them.

If the news got out that they lived in an underground castle, the media would have a field day. The quiet, private life that they shared would end.

To lighten the mood, Garden's dad said, “Come on, let's go ice skating. I think we could use a little recreation.”

Over the Edge of the World: Magellen's Terrifying Circumnavigation of the Globe by Laurence Bergreen
Appointed by J. F. Jenkins
Seducing Officer Barlowe by Paige Tyler
Lick & Devour (Monster Novelette) by Phal, Francette
Empire Of The Undead by Ahimsa Kerp
Life Is Not a Fairy Tale by Fantasia
Vektor by Konkoly, Steven
the Savage Day - Simon Vaughn 02 (v5) by Jack Higgins
Athel by E. E. Giorgi
Jellicoe Road by Melina Marchetta
Our partner