Read The Price of Glory Online

The Price of Glory 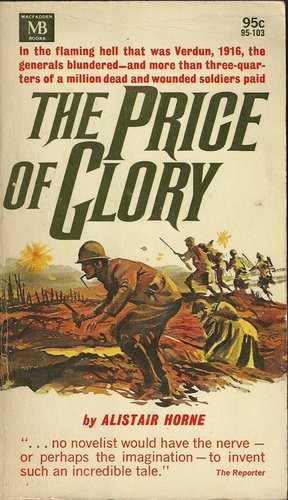 THE PRICE OF GLORY

Sir Alistair Horne was born in London in 1925, and has spent much of his life abroad, including periods at schools in the United States and Switzerland. He served with the R.A.F. in Canada in 1943 and ended his war service with the rank of Captain in the Coldstream Guards attached to MI5 in the Middle East. He then went up to Jesus College, Cambridge, where he read English Literature and played international ice-hockey. After leaving Cambridge, Sir Alistair concentrated on writing: he spent three years in Germany as correspondent for the
Daily Telegraph
and speaks fluent French and German. His books include
Back into Power
(1955);
The Price of Glory: Verdun 1916
(Hawthornden Prize, 1963);
The Fall of Paris: The Siege and the Commune 1970–71
(1965);
To Lose A Battle: France 1940
(1969);
Small Earthquake in Chile
(1972, paperback reissued 1999);
A Savage War of Peace: Algeria 1954–62
won both the
Yorkshire Post
Book of the Year Prize and the Wolfson History Award in 1978 (revised paperback edition 2006). His other publications include
The French Army and Politics 1870–1970
(1984), which was awarded the Enid Macleod Prize in 1985,
Harold Macmillan, Volumes I and II
(1988–91),
A Bundle from Britain
(1993), a memoir about the USA and World War II;
The Lonely Leader: Monty 1944–1945
(1996);
Seven Ages of Paris: Portrait of a City
(2003);
Friend or Foe: A History of France
(2004) and
The Age of Napoleon
(2004). In 1969 he founded a Research Fellowship for young historians at St Antony’s College, Oxford. In 1992 he was awarded the CBE; in 1993 he received the French Légion d’Honneur for his work on French history and his Litt.D. from Cambridge University. He was knighted in 2003. He is currently working on an authorised biography of Henry Kissinger, as well as a second volume of his own memoirs.

THE PRICE OF GLORY

7   The Fall of Colonel Driant

To Francis and Jacqueline

1 The Kaiser at the Crown Prince’s Headquarters at Stenay
.

12 The Crown Prince visiting men of the Fifth Army at the Front.

23 The glacis of Fort Vaux.

25 General Mangin after the war.

It would be nearly unthinkable to undertake any book on the First War without reference to the Imperial War Museum, and for their unstinting help I am greatly indebted; equally to the
Bibliothèque de Documentation Internationale Contemporaine
of the University of Paris, with its unique collection of First War books, and to the
Bibliothek für Zeitgeschichte
in Stuttgart, which made up in helpfulness for the material lost during the Second World War.

I should also like to record my appreciation to Captain Liddell Hart (almost as indispensable a
sine qua non
to writers on the First War as the Imperial War Museum) for his guidance and encouragement at an early stage; to General de Cossé-Brissac of the
Service Historique
of the French Army; to Lt-Colonel Morell of the
Militärgeschichtliches Forschungsamt
of the Bundeswehr; to General Robert Huré, Commandant of the
École d’ Artillerie,
and Colonel de la Ruelle of the
École de Guerre
; to General Henry Blanc, Director of the
Musée de l’Armée
at the Invalides; to Colonel Goutard and Commandant Homant, Chaplain at the
Ossuaire de Douaumont
; to Major Diggle, late of the 9th Lancers, for accompanying me round some of the battlefields with a professional eye; to Mrs Philip Pollock for reading the manuscript; to Mrs Alvarez, who did much of the work on cross-referencing and typing; to Mrs St George Saunders for help on the bibliography (in the interests of compactness, the bibliography and source notes contained in the original edition have had to be excised in this edition), and to the Research and Information Bureau of Chambers’ Encyclopaedia for some material on air/ground communication in 1916; and finally to the French Embassy in London.

The maps and plans were drawn by W. Bromage.

This Western-front business couldn’t be done again, not for a long time. The young men think they could do it again but they couldn’t. They could fight the first Marne again but not this. This took religion and years of plenty and tremendous sureties and the exact relation that existed between the classes. The Russians and Italians weren’t any good on this front. You had to have a whole-souled sentimental equipment going back further than you could remember. You had to remember Christmas, and postcards of the Crown Prince and his fiancée, and little cafés in Valence and beer gardens in Unter den Linden and weddings at the Mairie, and going to the Derby, and your grandfather’s whiskers…. This was a love-battle – there was a century of middle-class love spent here…. All my beautiful lovely safe world blew itself up here with a great gust of high explosive love….

In November of this year (1993), three-quarters of a century will have passed since the Armistice of November 1918 brought to a close the ‘War to End All Wars’, while it is now exactly thirty years since
The Price of Glory
was first published. Miraculously, it has remained in print ever since. It was written in a time of (relative) peace and prosperity. The Korean War had ended ten years previously. In the ‘you’ve-never-had-it-so-good’ years, Harold Macmillan and John F. Kennedy were at the helm; in Europe, de Gaulle and Adenauer had clasped hands on a new
entente
between the French and the Germans, marking an end to that old, murderous rivalry. The thought of another European war seemed to belong to a distant age of darkness and folly. At about the same time, several of us British writers, in our thirties, who had grown up or served in World War II, wrote books about that first conflict. In our latter-day superiority we chastised our foolish ancestors for letting it all happen, almost by mistake as it were, and letting it happen that way. They were
donkeys.
In our enlightened world, the Somme and Verdun could never be repeated, said Scott Fitzgerald’s Dick Diver, stricken by a visit to Verdun a few years after the battle. If there ever had to be war again, then World War II with its tanks and aircraft and Blitzkriegs showed that there were better ways of waging it than by hurling tens of thousands of men to certain death across the mud of No-Man’s-Land.