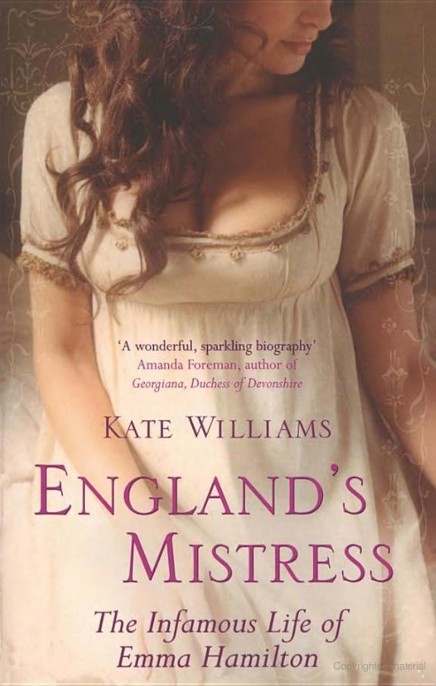 I must sin and love him more than ever.
It is a crime worth going to Hell for.

Lady Hamilton as a Bacchante,
engraving by Charles Knight after George Romney's copy, 1797, copyright © The Trustees of The British Museum

A Mansion House Treat—or, Smoking Attitudes!,
by Isaac Cruikshank, 1800, copyright © The Trustees of The British Museum

A View of the Bay of Naples, Looking Southwest from the Pizzofalcone Towards Capo di Posilippo,
by Giovanni Battista Lusieri, 1791 (watercolor, gouache, graphite, and pen and ink on six sheets of paper), copyright © The J. Paul Getty Museum, Los Angeles

Admiral Nelson Re-creating with His Brave Tars After the Glorious Battle of the Nile,
by Thomas Rowlandson, c. 1800, copyright © National Maritime Museum, London

Modern Antiques,
by Thomas Rowlandson, 1806, copyright © The Trustees of The British Museum

The Death of Admiral Lord Nelson
—
in the Moment of Victory,
by James Gillray published by Hannah Humphrey, December 29, 1805, copyright © National Maritime Museum, London
Moral Maxims from the Wisdom of Jesus,
book inscribed by Emma Hamilton in 1809, copyright © Sotheby's, London

6.
The School of Corruption

9.
The Square of Venus

19.
The Greatest Splendor in the World

25.
A Difficult Part to Act

32.
Falling into His Arms

35.
Days of Ease and Nights of Pleasure

40.
The Prince and the Showgirl

49.
Mistress of a Mourning Nation

52.
The Friends of Lady Hamilton

53.
Trouble with the Relations

Model, courtesan, dancer, fashion icon, actress, double agent, political hostess, mother, ambassadress, and hero's mistress, Emma Hamilton performed many roles in her astonishing rise from poverty to wealth and fame. None would have greater consequence for her than the part she played in Naples on July 19, 1798. She had joined the welcome party for Rear Admiral Horatio Nelson as his fleet anchored off the Bay of Naples. Nelson had come to protect Naples from the advancing French, and the Neapolitans were determined to give him a welcome fit for a hero. Rehearsals had been going on for weeks, but no one had been practicing as carefully as Emma Hamilton. Ravishingly beautiful and still only thirty-three, she realized that Nelson's arrival was a pivotal moment for her.

Her life would never be the same again.

Five years earlier, on Nelson's first visit to the city, Emma had hardly noticed the unprepossessing naval captain. By 1798, however, after his amazing success at the Battle of the Nile made him the one man who seemed able to save Europe from Napoleon, she saw his arrival as an opportunity to propel herself onto a bigger stage. Nelson was exhausted after weeks of fighting the French and in pain from his shot eye and the wound where his right arm had been amputated. As soon as the great man boarded the welcome boat, Emma threw herself upon him, weeping with happiness. To the sounds of cheers and cannon fire resounding across the bay, she gathered Nelson into her arms and, leaving the astonished royal entourage and her husband, Sir William Hamilton, in her wake, supported the triumphant but exhausted hero into the ship's cabin. The man fêted as England's bravest man had collapsed onto the bosom of Europe's biggest female celebrity. Emma Hamilton was already legendary as the girl from nowhere who had catapulted herself into high society. Her consummate piece of stage management on that July day marked the start of her passionate affair with Nelson—and the beginning of her ascent to a level of fame we would find breathtaking even today.

How did Emma, a girl born into terrible poverty and exploitation, reach the position where she was able to seduce and charm England's most famous man? What did she have to do to get there?

If it were fiction, Emma's life story would be dismissed as improbable. It is a story that takes us through the grand sweeps of eighteenth-century history to reveal all the glory and horror of her age. To understand how Emma turned herself into the most famous woman of her time, we must first go back thirty years and more than a thousand miles from the glittering Neapolitan court and the duties of an ambassador's wife to her poverty-stricken birth in the slums of northwest England.

See How They Run by James Patterson
The Wild Culpepper Cruise by Gary Paulsen
Pelican Point (Bachelors of Blueberry Cove) by Kauffman, Donna
White Star by Beth Vaughan
Match Made in HeVan by Lucy Kelly
Deadly Gamble by Linda Lael Miller
If You Still Want Me by CE Kilgore
The Son by Philipp Meyer
Nocturnes and Other Nocturnes by Claude Lalumière
Shipwreck by Tom Stoppard
Our partner