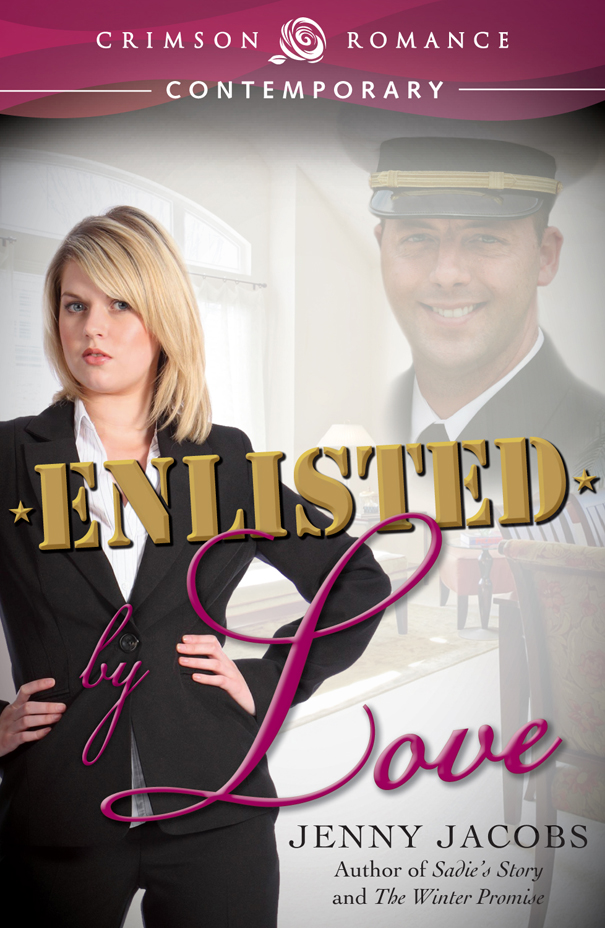 Enlisted by Love
Jenny Jacobs,
author of
Sadie's Story
and
The Winter Promise

If you didn't keep asking me “so then what happens?” I would never finish anything.

More From This Author

Many thanks to Jess Verdi for being such a wonderful editor and to everyone at Crimson Romance for your hard work and skill.

Greta Ferguson folded the morning newspaper and set it aside to join the other clutter on the bedspread: her open laptop, a yellow legal pad, three black pens, and a sketch of the bones of an empty living room. Although she was extremely well organized in all other areas of her life, she liked being able to make a mess â a big mess â in her bedroom, on her bed, and there was no one to complain. It was liberating.

She reminded herself of this fact several times a day.

Greta ran her interior design business from her bedroom because it was the most comfortable place in the house and she was convinced comfort equaled efficiency. Being efficient in a gray fabric cubicle was no way to live your life, as she'd discovered. Plus, she could always take a nap if her clients were being too stressful.

Downstairs, the front door opened, then shut with a decisive snap that heralded the arrival of her sister. A minute later, Tess bounded into the bedroom and handed Greta a cup of coffee. The morning ritual had altered this past spring. Before then, Greta had often fetched her own coffee from the nearby coffee shop, and on many occasions had collected Tess's at the same time. Then Greta had injured her knee skiing and that mishap had changed everything. She had set into motion a process that hadn't just changed Tess's life but her own. That had never been her intention, and she still smarted a little over causing it.

“Good morning,” Tess said cheerfully, which was not how Tess had greeted mornings, or Greta, before. Before spring. Before Greta's knee injury. Before Michael.

“Good morning,” Greta replied. Tess, looking like a gypsy fortune teller in her scoop neck blouse, her dark hair flying every which way, glowed from top to bottom. Greta tried to appreciate the joy in Tess's shining eyes. To that end, she braced herself and offered a serene smile that cost a great deal of emotional energy.

“Belinda's going to be an attendant,” Tess said, setting her cup of coffee down and yanking the drapes open. “I found the most darling material for her dress.”

Greta shook her irritation off. Tess was entitled to a big goofy wedding if she wanted one. Her first wedding had been conducted by a judge at city hall, with a title registration clerk dragged over to witness. Greta was pretty sure the same judge had presided over Tess's divorce, one she hadn't wanted. But Tess had bounced back from disillusionment, unlike some people in the room.

“How is Michael doing?” Greta asked.

“I finally got him to agree to wear a tux,” Tess said, which was not what Greta had asked.

Michael was a friend of Greta's. Knowing him, he'd be happy with something simple and easy, like wearing jeans and a T-shirt in front of the aforementioned judge at city hall. Well, he'd known what he was getting into when he'd fallen for Tess. He had known it and he had fought hard, but you couldn't stop love. Or at least you couldn't stop Tess.

Greta was able to escape Tess's shining happiness with the excuse of having to meet a potential new client. Michael had referred him â “My buddy Ian Blake is moving to town and he is definitely going to need some help” â and Michael was a good egg, so she was pretty sure this Ian Blake would be able to keep his hands to himself. She was also pretty sure he would be able to afford her services, or Michael would never have referred him.

So she was feeling somewhat optimistic when she walked up the sidewalk to Mr. Blake's attractive two-story in a new subdivision. She hadn't worked on many houses in this part of town so she was interested to see the interior layout.

She patted her chignon to be sure it was in place, straightened her suit jacket, and pressed the doorbell.

The door promptly swung open, which she appreciated â the number of people who seemed surprised when she showed up at ten
A.M.
to keep a ten
A.M.
appointment was by now beyond reckoning.

The man who opened the door was taller than she, which wasn't always the case for her as it was for Tess, so first she got a good look at a solid chest and broad shoulders in a dress uniform. Then, tilting her head back, she took in a square jaw and dark hair flecked with gray. Warm eyes appreciated her, gray eyes with squint marks around them. Early 40s at a guess. She felt a flutter in her stomach. Not nerves. She hadn't been nervous about an appointment in ten years.

She squared her shoulders and met his gaze. He was smiling, a charming smile, and he seemed relaxed and confident. He was very very attractive, the kind of man you could count on in a bedroom. He would know just where to touch and just how to caress and just what to say â

Why hadn't Michael warned her? Of course, it probably never occurred to Michael that Greta could have such a regrettable weakness for attractive men. Not just attractive men, but a certain type of attractive man, and what she had learned, through pain and sorrow and a certain amount of therapy, was that
she
was the common denominator. That she picked the men, culminating in the most dangerous one, the one she had almost not escaped.

It was up to her to break the cycle. She
had
broken the cycle, though Tess said
Never dating is not breaking the cycle, Greta
, but what did Tess know.

“Hello,” she began, after a long, long moment had passed.

“Ms. Ferguson? I was expecting you. Come on in.”

He stepped back but Greta did not want to cross the threshold. It wasn't that she didn't trust him â she didn't know him to trust him or not trust him.
It's up to you to make good choices,
the therapist had said, and Greta had a whole series of good choices she had made and could be proud of. But â

“So, take a look around,” he said. “You'll need to see what you're getting into.”

“Yes, thank you, Mr. Blake,” Greta said. She'd seen the lieutenant colonel's insignia on his uniform, but she was willfully ignoring it. When he'd opened the door to her, she'd seen the interest spark in his eyes, and she fully intended to quench the spark before it got any bigger. She knew what happened with sparks. They caught and built into flames and before you knew it, you were calling in the parajumping firefighters and saying,
But I thought I could control it
. The moral of the story was that you couldn't control fires, and that was why you stamped out the sparks when you saw them. Every last one of them. Whether they were his or yours.

Mr. Blake didn't correct her on the proper title to use when addressing him, which she tried not to appreciate. Appreciating a man like him was as bad as being attracted to a man like him, because it short-circuited the rational part of the brain just the same way. It interfered with your judgment. It made you choose poorly.

Greta hadn't heard that phrase since she was about eight years old.

“Are you here on a permanent assignment?” she asked. She was pretty sure there was no such thing in the Army, but she'd willfully locked away everything she'd ever learned about Army life, except the one unalterable rule she'd derived from all of the misery:
No more military men. Ever.

“I'm retiring,” he said. “Got my time in. Going to be a civilian.” He smiled as if she should congratulate him, which she did, though privately she was a little disappointed. That meant there was no chance he'd be reassigned somewhere else, somewhere out of her hair. Which meant she was going to have to squelch the spark, hers if not his but hopefully both, by using more direct means.

“New job?” she asked, then could have bitten her tongue. How was expressing curiosity going to squelch the spark? Why was she standing here, prolonging the conversation?

If she didn't want that eventuality to come to pass â and she did
not
â then she had to stop the spark in its tracks.

Happily, she had an extensive repertoire of spark-squelching techniques at her disposal, and she rifled through them for one that would suit her needs now.

“I'll be doing a lot of entertaining,” Mr. Blake began. He smiled and it made his gray eyes crinkle up, and she stared at him for a long moment while he didn't finish what he was saying, and she didn't have the wit to call him on it. The spark was still in his eyes, and it was burning brighter now. He was probably seeing the same spark in her eyes even though the rational part of her brain knew better, even though she was not falling for another man in uniform no matter how many times her libido alerted her to how
my god he's delicious.

He leaned a little nearer to her. She hadn't squelched the spark.
She had fanned the flames.
What had she been thinking? Her heart was beating harder, her breath coming faster. Still not nerves. Every part of her body was on high alert. Every part of his, too â she did not let her eyes drop.

“What do you want me to accomplish here?” she cut in before she could do something stupid or encourage him in the same.

“I've collected some things in my travels,” he said.

Sure
, she thought, trying to remember why she was not going to be attracted to him. Mange, cholera, jungle rot. She knew all about the things soldiers collected on their travels.

“I have the stuff in a storage unit. I thought you could help me pull everything together. You know, figure out what goes where,” he said, waving vaguely at the unfinished room. “And maybe choose some curtains.”

The Lights of Skaro by David Dodge
The Case of the Love Commandos by Tarquin Hall
Treachery at Lancaster Gate by Anne Perry
About that Night by Keane, Hunter J.
Daddy's Too Big For My Little Girl (Virgin Daughter Breeding Sex) by Riley Rourke
A Mother's Sacrifice by Catherine King
My Lady Vampire by Sahara Kelly
The Sea Beggars by Holland, Cecelia;
Pride and the Anguish by Douglas Reeman
Feather Bound by Sarah Raughley
Our partner