Read She Had No Choice Online

She Had No Choice 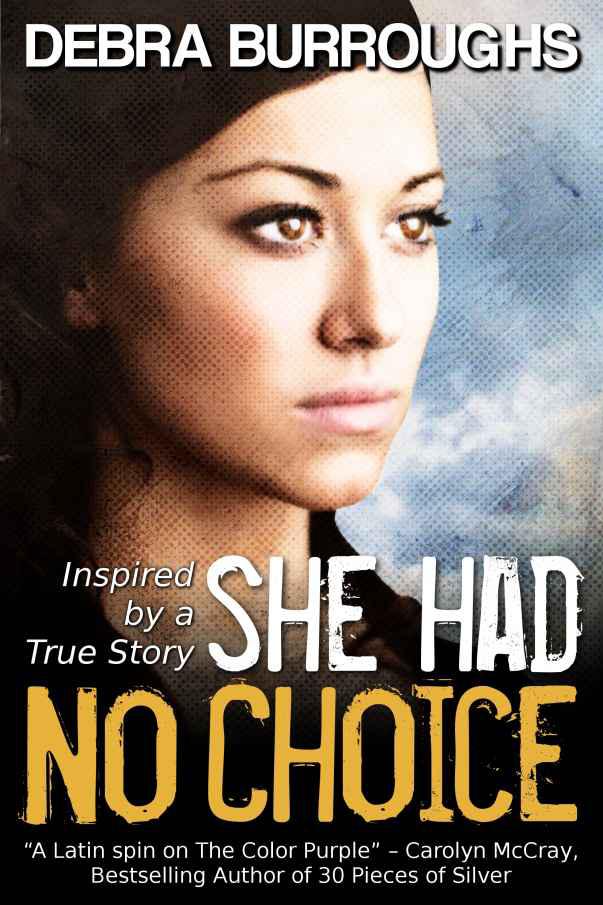 She Had No Choice
is a dramatic family saga that takes a Latin spin on the epic novel and film, The Color Purple. Inspired by a true story, this gripping and poignant multi-generational story follows the Ramirez family through a roller coaster of difficult, yet inspiring events, setting off a wide range of emotions. This tale proves that Love really does conquer all.

The inspiration for She Had No Choice came from the stories my mother and grandmother told me about their difficult, yet inspiring lives. I come from a large Mexican family, where my mother is the oldest of ten children, and there was an abundance of gripping family stories handed down.

Debra Burroughs writes with intensity and power. Her characters are rich and the stories are fully of compelling suspense and real romance. If you're looking for graphic violence and explicit sex scenes, these are not the books for you, but if you're looking for stories with real romance that will entertain you, grab your attention, touch your heart, and leave you wanting more, dive into one of her captivating books.

She Had No Choice

Although
She Had No Choice
is inspired

by a series of true stories, the names

were changed to protect the

All rights reserved as permitted under the U.S. Copyright Act of 1976. No part of this publication may be reproduced, distributed, or transmitted in any form or by any means, or stored in a database or retrieval system, without the prior permission of the publisher. This story is a work of fiction. Characters and events are the product of the author’s imagination. Any resemblance to persons, living or dead, is purely coincidental.

Chapter 1   -
Running For Their Lives

Chapter 23 -
Mama Saved Them All

This book is lovingly dedicated to my

wonderful husband, Tim. Without his

this book would not have been written.

Chapter 1:
Running
for Their Lives

Pancho Villa’s reign of terror had ended a few years earlier, but now there was a new enemy to battle – and he was merciless. The Death Angel had knocked repeatedly on the Ramirez family’s door over the past few weeks. Now, it was imperative for them to swiftly and stealthily find a way to move what was left of the family to a safer place before he came calling again.

Emilio and his wife, Juanita, hurriedly made plans to flee, covertly receiving word of the time and place for the dangerous escape. They were desperate to get their family out of Mexico quickly, but now all they could do was wait.

The appointed night arrived. Tied about Emilio and Juanita’s waists were pouches filled with as many belongings as they dared to take. She had planned all day, choosing this, discarding that, filling their pouches with dollars they had exchanged for their pesos, a comb, a couple handfuls of beef jerky and an old pocket watch.

This was going to be a perilous journey for the Ramirez family. Emilio and Juanita instructed their children once more, as they had for the past two evenings, that on this trip they needed to stay close together and keep silent. Noise of any kind could draw attention and put them in danger.

“
We have no choice, mi’ja,” Mama replied, putting an arm around her. “One day you’ll understand.”

Their friend, Señor Vega, agreed to load them in the back of his horse-drawn wagon and take them to the pick-up point. The location was the old abandoned Castro ranch. It was once a working venture, until Pancho Villa’s men plundered it during the Mexican Revolution several years before. Now, it was nothing more than a few outbuildings with sagging roofs and jagged, broken windows where lonely tumbleweeds collected. That desolate ranch was where they would begin their journey.

Juanita heard the horses’ hooves and wagon wheels crunch the dry ground outside their house and knew Señor Vega had pulled up. Her back stiffened, and she drew in a quick breath. There was no turning back now.

“
Hey, Señor,” Emilio called out to his friend from the doorway, as the children somberly filed out of the house. Señor Vega waved back and motioned for the children to get in the back of the wagon.

They reluctantly climbed in, fearful of what lay ahead, sad to be leaving the only life they knew. Mama and Papa had shared with them during the past week how this would be an adventure, a new start for all of them. They had asked their children to trust them.

Juanita took one last look at their home and blew out all the candles lighting the living room. She stood for a moment in the doorway, looking back into the dark house. “Good-bye my friend,” she said. “You’ve been very good to us.” She closed the door quickly and walked away, choking back her tears. Drawing a deep calming breath, she held her head high and walked toward the buckboard.

Papa had already helped the children into the wagon. They were quietly talking among themselves, the oldest daughter holding her sleepy little brother on her lap. Emilio could see the pain in his wife’s eyes, but speaking of it would only make it worse. So, without a word, he lifted her into the back with their children.

“
Remember, niños,” he said to the children, “you must be very quiet this whole trip. Understand?” They nodded. They understood to be quiet, but they didn’t understand why they had to leave. The youngest were confused and frightened, the eldest sad and nervous.

“
And when we get off the wagon, you
must
stay together. You older ones need to watch for the young ones.” Then Papa pulled himself up on the front seat next to Señor Vega, and they were off.

Mama watched over her children during the bumpy ride on the back roads. Looking into the dark night, she stared at the cloudless sky with just a sliver of crescent moon and a sprinkling of stars. It seemed to her like a vast wall of sadness with small glimmers of hope shining down on them. She was determined, no matter how she felt, to try to keep a smile on her face for her children’s sake, all the while pushing down her own grief and anxiety.

After about thirty minutes, they reached the deserted ranch and found the family named Lopez already there, waiting in silence. The soft moonlight gave them barely enough illumination to find their way and see the silhouettes of the others standing there. The Ramirez family climbed out of the wagon as quietly as they could and shuffled in the darkness over to where the others were standing. Papa whispered his thanks to Señor Vega and shook his hand before he turned the wagon around and left.

In hushed tones, the two families exchanged greetings. Everyone nervously awaited the promised truck’s arrival, the vehicle that would take them on the next leg of their journey, one step closer to their freedom. They stood waiting in the faint moonlight, each likely trying to imagine what their new life in the United States would be like. Emilio wondered if there would be enough work to take care of their family, and Juanita thought about the living conditions. The children were merely concerned with when they would eat next or if they would find friends.

Time seemed to pass slowly. The adults and older children were exchanging nervous looks, even commenting on their wishes for the truck to show up soon. The children were getting fidgety, especially the little ones.

Soon, they heard the faint roar of an engine in the distance. Then, the much-anticipated truck arrived. It was a dark green Buick flatbed, about seven or eight years old, covered with the desert’s dust and dirt. It had well-worn wooden railings on each side with weathered canvas tied over it to hide its cargo.

The truck pulled in near to where the people had gathered, coming to a squeaky stop. The driver hopped out and addressed them.

“
Everyone, I’m Paco. Let’s get loaded up quickly. We don’t have much time.”

Paco took an old, but sturdy, wooden box off the front seat and walked around to the rear of the truck. He set the box down, stepped up on it and lifted up the canvas flap. One at a time, climbing clumsily into the back, each person stepped on the box then up into the bed of the truck. The stronger helped the weaker, especially the children, until both families were on board.

The driver secured the tattered canvas flap down over the back and picked up the box. He stored it on the front seat next to him, not allowing any of his passengers to sit up front with him in case anyone saw them.

For the most part, they all sat in silence in the back, some resting up for what was ahead, some too anxious to sleep. They sat in their cramped quarters for the next two hours until they reached their destination, near El Sasabe.

The Ramirezes had been told another truck full of people wanting to cross the border would meet them at their drop-off point, and they found it was already there when they arrived. Men, women and children were gingerly piling out of the back of it. As the Ramirez and Lopez families climbed out of their vehicle, their driver told them to huddle around him and listen up. He kept his voice as low as possible, but he was still loud enough to be heard.

“
Go out into the desert. Each of you take a hiding place behind the shrubs and rocks. Try to stay out of sight until you’re given the signal to run. When it’s time, I’ll let out a loud coyote howl. Then, you all just run for the fence as fast as you can. Don’t look back – just run!”

The families quickly dispersed and found their hiding places, waiting for the coyote howl. Papa took the two younger boys and hid behind a big rock, holding little Marcelo by the hand. Mama and the two girls hid behind a clump of cactus. The older son found his own bush near Papa to shield himself. Before long, a loud shrill howl pierced the night air and carried out over the flat land. The race was on.