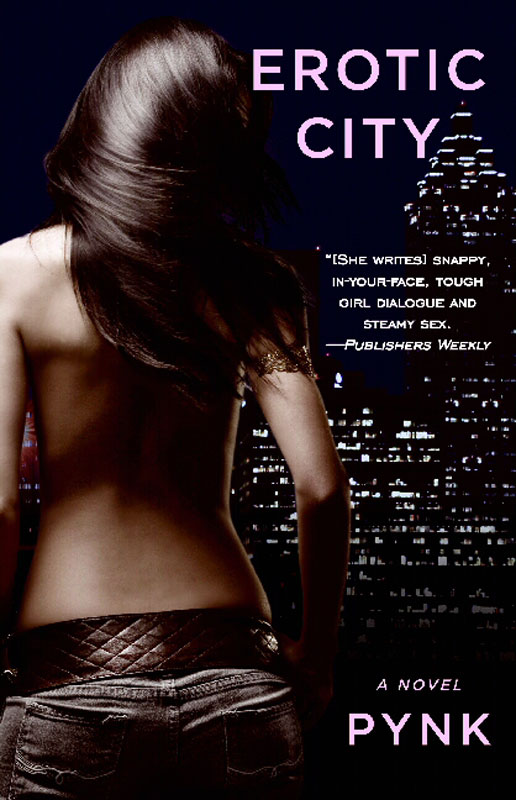 The quote on the front cover of this book ran in the February 25, 2002, issue of
Publishers Weekly
, for
May December Souls
, which was published under Pynk’s real name.

A Preview of “Sexaholics”

This Pynk book is dedicated to past, current, and future swingers everywhere. Swing on!

I want to express my sincere appreciation to my grand editor, Karen Thomas, to Jamie Raab, Latoya Smith, Linda Duggins, Sam Kelly, and everyone at Grand Central Publishing who has contributed to the debut of
Pynk.

To you, the readers, thanks for picking up this book. Milan Lee Kennedy is more than happy to host you at her dirty south, sexual playground.

To Brent for the “life” e-mails, Mz. Poison (the flogging mistress) for agreeing to be interviewed, to Anthony for your hot, invaluable information, to HB for hanging tough, and to Adrienne, my test reader—thanks, thanks, and more thanks.

And, I am very grateful to Maureen Walters at Curtis Brown, Ltd., for negotiating this deal.

In October 2009, I’ll give birth to my sophomore erotica novel,
Sexaholics
, also from Grand Central Publishing. My characters, Miki, Valencia, Brandi, and Teela are in sexual rehab, and, if you let them, they will turn you out! Who will break their addiction to sex, and who will fall off the no-fuckin wagon? A wild preview chapter is at the end of this book.

Also, please check out the “shop” page on my Web site at
www.authorpynk.com
, where you’ll find hot items for your own personal enjoyment, as well as my official
Pynk Hard-Candy
book thongs. Consider it a sexy piece of jewelry for the crack of your book!

Until then remember, no glove no love, and twenty-one and over. Keep it tight and keep it pynk!

If nudity or sexual acts offend you,

please do not enter.

•
Jarod Hamilton:
Mr. Big Stuff with a fetish or two

I
wanna be your bitch, mistress.” He was muscular and hairy, wearing pink lingerie and high heels. His submissiveness reeked.

The curvy mistress replied, “Follow me, my slave.” Her domination made his torpedo salute underneath the sheer lace fabric of his panties.

“Can I lick your feet?” a naked man asked a heavyset woman.

“Only if I can give you a foot job.” She took his hand as he led the way into fetish mania.

“Do you want some?” the tall lady asked the short lady who was fixated on her beautiful, bountiful ass.

“Hell yeah,” she replied with a look like she was about to rob the National Bank of Pussy.

She was about to get her swinger-newbie cherry busted.

That’s just how the shit went down.

And not always in that order.

Three scantily clad, twenty-something women, one white, one black, one Asian, sat at the circular studded bar, bouncing their heads, singing in unison, sipping on pink champagne in the main purple room. One wore red, one wore white, and one wore blue. A red bustier and strategically ripped black denim jeans, a white bikini top and low-rise boy shorts, and a blue teddy with lace-up thigh-high stiletto boots.

The sexy Asian woman turned coolly and came face-to-face with zebra-printed drawers being worn by a sculpted, tanned white man with a six-pack. He strutted behind her back, looking edible. Her look devoured him from head to toe. She licked her lips from west to east. It was clear he was at full attention. He approached a short, lean woman who was wearing fire engine red lipstick to match her red pussy hairs. He took her welcoming hand. The woman looked back and winked at her man’s admirer as they headed off to the hot tub. The Asian woman blushed and nervously fingered her jet-black hair. She darted her sights away with demure hesitation, as if to excuse herself for raping the model-like man with her hungry dark eyes.

“Get up” was all that could be heard as a toffee-colored man walked up to the group. He had salt and pepper hairs on his head and chest, and was wearing only an ivory towel wrapped at his thick waist as he delivered his no-nonsense demand.

One of the participants of the sixty-nine let out a girlie growl and continued her face-fuck against a stranger’s fleshy inner split.

His woman, the giver, the muffin-muncher, barely twenty-nine, moved her auburn hair to the side and looked up at him with half eyes as she backed her cum-coated lips away from the smiling clay dugout. There were two looks that shone on her face. One was a look as though she was high on lust, and happy to take on the label of vagitarian, as if she were on a strict vagina-only diet. The other look was as though she’d found the sudden interruption a complete nuisance.

“Watch that group of five down on the burgundy lounger in the silver room. Brian reports a jealous man who’s pissed off about his woman who’s involved in girl-on-girl.” Milan Kennedy pressed the release button on her Nextel two-way as she glanced through the smoke-tinted one-way mirror from her office, looking down toward the first floor.

“Just check on it, Lavender.”

Curly-headed Lavender sprinted down the stairway with a wireless earpiece that flashed a tiny blue light, looking every bit the professional boxer he was some years back. Lavender was the name he’d been given during his boxing days, which seemed to stick with him. DeMarcus George Lewis was the name he was given at birth, though very few called him by any name except the one he’d earned in the ring. He spoke with his heavy voice. “Hey, Jarod. Come on over to the silver room right away.”

Solstice Heat by Brown, Leila
Captured: A Bad Boy Romance by Faye, Carmen
Never Less Than a Lady by Mary Jo Putney
The Double Rose by Valle, Lynne Erickson
Falling In by Dowell, Frances O'Roark
The Glenmore's: Caught by Horsnell, Susan
The Independent Worlds (The Sixteen Galaxies Book 2) by Drayman, William
Desert Heat by Lindun, D'Ann
Nightmares From a Lovecraftian Mind by Jordan Krall
The Dead of Winter by Chris Priestley
Our partner