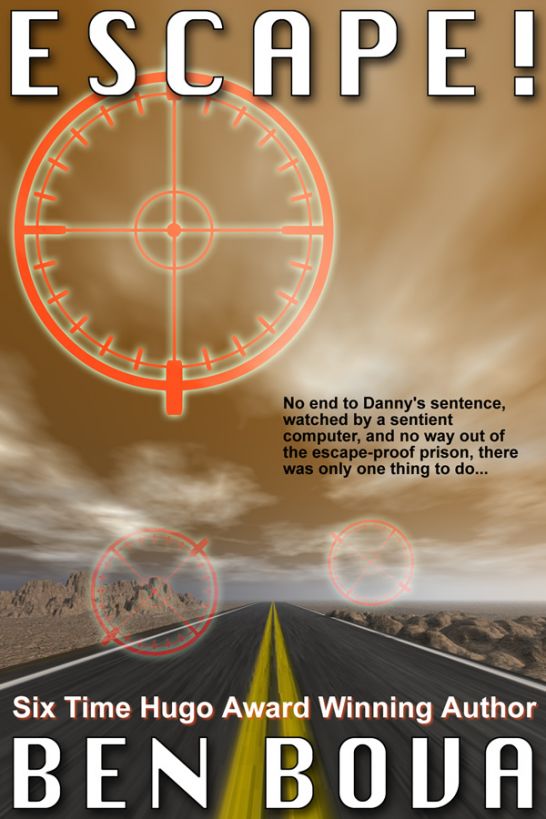 Other books by Ben Bova:

The Craft of Writing
Science Fiction that Sells

This ebook is licensed for your personal enjoyment
only. This ebook may not be re-sold or given away to other people.
If you would like to share this book with another person, please
purchase an additional copy for each person. If you're reading this
book and did not purchase it, or it was not purchased for your use
only, then please purchase your own copy. Thank you for respecting
the hard work of this author.

To my parents, with love and gratitude

The door shut behind him.

Danny Romano stood in the middle of the small room,
every nerve tight. He listened for the click of the lock.
Nothing.

Quiet as a cat, he tiptoed back to the door and tried
the knob. It turned. The door was unlocked.

Danny opened the door a crack and peeked out into the
hallway. Empty. The guards who had brought him here were gone. No
voices. No footsteps. Down at the far end of the hall, up near the
ceiling, was some sort of TV camera. A little red light glowed next
to its lens.

He shut the door and leaned against it.

Danny looked all around the room. There was only one
bed. On its bare mattress was a pile of clothes, bed sheets, towels
and stuff. A TV screen was set into the wall at the end of the bed.
On the other side of the room was a desk, an empty bookcase, and
two stiff-back wooden chairs. Somebody had painted the walls a soft
blue.

The room was about the size of the jail cells they
always put four guys into. Or sometimes six.

And there was something else funny about it.
The
smell, that’s it!
This room smelled clean. There was even fresh
air blowing in through the open window. And there were no bars on
the window. Danny tried to remember how many jail cells he had been
in. Eight? Ten? They had all stunk like rotting garbage.

He went to the clothes on the bed. Slacks, real
slacks. Sport shirts and turtlenecks. And colors! Blue, brown, tan.
Danny yanked off the gray coveralls he had been wearing, and tried
on a light blue turtleneck and dark brown slacks. They even fit
right. Nobody had ever been able to find him a prison uniform small
enough to fit his wiry frame before this.

Then he crossed to the window and looked outside. He
was on the fifth or sixth floor, he guessed. The grounds around the
building were starting to turn green with the first touch of early
spring. There were still a few patches of snow here and there, in
the shadows cast by the other buildings.

There were a dozen buildings, all big and square and
new-looking. Ten floors high, each of them, although there were a
couple of smaller buildings farther out. One of them had a tall
smokestack. The buildings were arranged around a big, open lawn
that had cement paths through it. A few young trees lined the
walkways. They were just beginning to bud.

“No fences,” Danny said to himself.

None of the windows he could see had bars. Everyone
seemed to enter or leave the buildings freely. No guards and no
locks on the doors? Out past the farthest building was an area of
trees. Danny knew from his trip in here, this morning, that beyond
the woods was the highway that led back to the city.

Danny smiled. What were the words the judge had used?
In... in-de-ter-minate sentence
. The lawyer had said that it
meant he was going to stay in jail for as long as they wanted him
to. A year, ten years, fifty years....

“I’ll be out of here tonight!” He laughed.

A knock on the door made Danny jump.
Somebody
heard me!

Another knock, louder this time. “Hey, you in there?”
a man’s voice called.

The door popped open. “I’m supposed to talk with you
and get you squared away. My name’s Joe Tenny.”

Joe was at least forty, Danny saw. He was stocky,
tough-looking, but smiling. His face was broad; his dark hair
combed straight back. He was a head taller than Danny and three
times wider. The jacket of his suit looked tight across the middle.
His tie was loosened, and his shirt collar unbuttoned.

A cop, Danny thought. Or maybe a guard. But why ain’t
he wearing a uniform?

“Listen, kid,” Tenny said, “we’re going to be stuck
together for a long time. We might as well be friends.”

Tenny’s eyebrows went up while the corners of his
mouth went down. His face seemed to say,
Who are you trying to
kid
,
wise guy?

Aloud, he said, “Okay, suit yourself. You can have it
any way you like, hard or easy.” He reached for one of the chairs
and pulled it over near the bed.

“That depends on you. A couple of years, at least.”
Joe turned the chair around backwards and sat on it as if it were a
saddle, leaning his stubby arms on the chair’s back.

Danny swung at the pile of clothes and things on the
bed, knocking most of them onto the floor. Then he plopped down on
the mattress. The springs squeaked in complaint.

Joe looked hard at him, then let a smile crack his
face. “I know just what’s going through your mind. You’re thinking
that two years here in the Center is going to kill you, so you’re
going to crash out the first chance you get. Well, forget it! The
Center is escape-proof.”

In spite of himself, Danny laughed.

“I know, I know....” Tenny grinned back at him. “The
Center looks more like a college campus than a jail. In fact,
that’s what most of the kids call it—the campus. But believe me,
Alcatraz was easy compared to this place. We don’t have many guards
or fences, but we’ve got TV cameras, and laser alarms, and
SPECS.”

Danny felt totally confused. Somebody was talking
through the TV set? The screen, though, showed the words he was
hearing, spelled out a line at a time. But they moved too fast for
Danny to really read them. And Specks, whoever he was, called Joe
Tenny a doctor.

“ALL SYSTEMS ARE FUNCTIONING WELL, DR. TENNY. A LIGHT
TUBE IN CORRIDOR SIX OF BUILDING NINE BURNED OUT DURING THE NIGHT.
I HAVE REPORTED THIS TO THE MAINTENANCE CREW. THEY WILL REPLACE IT
BEFORE LUNCH. THE MORNING CLASSES ARE IN PROGRESS. ATTENDANCE
IS...”

“Enough, skip the details.” Joe turned back to Danny.
“If I let him, he’d give me a report on every stick and stone in
the Center.”

“Not a
he,
really. An
it
. A computer.
Special Computer System. Take the ‘s-p-e’ from ‘special’ and the
‘c’ and ‘s’ from ‘computer system’ and put the letters together:
SPECS. He runs most of the Center. Sees all and knows all. And he
never sleeps.”

Joe Tenny turned back to the TV screen, which was
still glowing. “SPECS, give me Danny Romano’s record, please.”

The reply came without an instant’s wait:

Danny asked, “What kind of place is this? How come
I’m not in a regular jail?”

Joe thought a minute before answering. “This is a new
place. This Center has been set up for kids like you. Kids who are
going to kill somebody—or get themselves killed—unless we can
change them. Our job is to help you to change. We think you can
straighten out. There’s no need for you to spend the rest of your
life in trouble and in jail. But you’ve got to let us help you. And
you’ve got to help yourself.”

Tenny’s face turned grim. “Like I said, a couple of
years, at least. But it really depends on you. You’re going to stay
as long as it takes. If you don’t shape up, you stay. It’s that
simple.”

Joe Tenny went right on talking. He used SPECS’
TV screen to show Danny a map of the Center and the layouts of the
different buildings. He pointed out the classrooms, the cafeteria,
the gym and shops, and game rooms.

But Danny didn’t see any of it, didn’t hear a single
word. All he could think of was:
as long as it takes. If you
don’t shape up, you stay
.

They were going to keep him here forever. Danny knew
it. Tenny was a liar. They were all liars. Like that lousy social
worker when he was a kid. She told him they were sending him to a
special school. “It’s for your own good, Daniel.” Good, real good.
Some school. No teachers, no books. Just guards who belted you when
they felt like it, and guys who socked you when the guards weren’t
looking.

If you don’t shape up, you stay
. Shape up to
what? Get a job? How? Where? Who would hire a punk sixteen-year-old
who’s already spent half his life in jails?

“We gave you a good room,” Joe said, getting up
suddenly from his chair. “Your building’s right next-door to the
cafeteria.”

Danny snapped his attention back to the real
world.

“Come on, it’s just about lunchtime.”

He followed Joe Tenny out into the hallway, to
the elevator, and down to the ground floor of the building. Danny
saw that somebody had scratched his initials on the metal inner
door of the elevator, and somebody else had worked very hard to
erase the scratches. They were barely visible.

They pushed through the glass doors and followed a
cement walkway across the piece of lawn that separated the two
buildings. Danny shivered in the sudden chill of the outside air.
Tenny walked briskly, like he was in a hurry.

Groups of boys—two, three, six, eight in a bunch—were
walking across the campus grounds toward the cafeteria building.
They were talking back and forth, joking, horsing around.

But Danny’s mind was still racing. I can’t stay here.
Can’t leave Laurie alone on the outside. Some other guy will grab
her. By the time I get out, she won’t even remember me. Got to get
out fast!

Joe pushed open the glass doors of the cafeteria
building. It was warm inside, and noisy. And it smelled of
cooking.

“DR. TENNY,” called a loudspeaker. Danny thought it
sounded like SPECS’ voice only much louder and with a bit of an
echo to it. “DR. TENNY, PLEASE REPORT TO THE ADMINISTRATION
BUILDING.”

“Looks like I miss lunch,” Joe said, glancing up at
the loudspeaker. Danny saw that it was set into the panelled
ceiling. There was a TV lens with its unblinking red eye next to
it, watching them.

“Have a good feed, Danny. The rest of the day’s all
yours. Move around, make some friends. SPECS will get you up at the
right time tomorrow morning and tell you which classes to go to.
See you!”

And with a wave of a heavy, thick-wristed hand, Joe
headed back for the glass doors and outside.

Danny watched him go. Then a half-dozen boys pushed
through the doors and walked in toward the cafeteria. They were
laughing and wise-cracking among themselves. No one said hello or
seemed to notice Danny at all.

Trollhunters by Guillermo Del Toro, Daniel Kraus
Faeries & Elementals for Beginners: Learn About & Communicate With Nature Spirits by Alexandra Chauran
After Hours by Cara McKenna
The Sheikh’s Reluctant Bride by Teresa Southwick
What a Woman Desires by Rachel Brimble
The Marked Ones by Munt, S. K.
Creeps by Darren Hynes
The Changeling Bride by Lisa Cach
The Perils of Skinny-Dipping by J A Sandilands
Mesmerized: The Magician's Plaything by Mallorie Griffin
Our partner