Read Gone With the Witch Online

Gone With the Witch 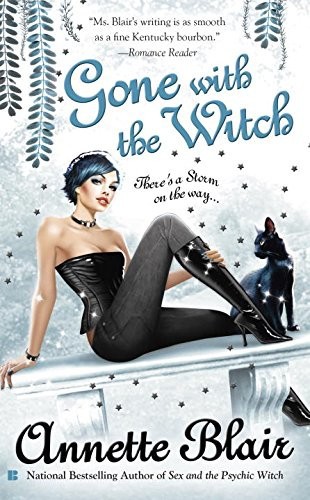 Gone With
The
Witch

BENEATH
a rare blue moon in June, Storm Cartwright,
bridesmaid, her black hair streaked blue to match her
gown, stood with Aiden McCloud, best man, the scruffy stud muffin she planned to kidnap after her sister's wedding, unless he decided to cooperate. In which case, hell was bound to freeze over before midnight.

"I know you hate tailcoats, Scruffleupagus, but, dragon's
blood, you clean up good for an outlaw biker."

"I'll only feel good when I can take it
off,"
he said.

She certainly hoped so. "This is your last chance," she
warned him. "We both have two weeks off. Come with me
to find the baby I hear crying in my mind when I'm near you."

Aiden raised a brow as dark as his hair, the quirk of his
sculpted lips beguiling. "In your mind," he repeated thought
fully. "Those words strike fear in my heart'. I have saner things to do than chase the voices in
your
head, thank you very much."

"Do 'I scare you?" A sense of power fired Storm's confidence.

"You'd think so, wouldn't you?" Aiden shook his head as if he should know better.

A sea breeze tossed his thick, wavy hair so one lazy
lock landed on his brow, giving a hint of the bad boy look she loved, even without the scruffy hair and five o'clock shadow. She grabbed her wildflower coronet to keep the
wind from tossing that as well, and Aiden's gaze kept pace
with the rise of her breasts as her arm went up.

Since meeting him—a case of electromagnetic at
tr
action
at first sight—Storm's clai
rv
oy
an
ce and clairaudience had kicked into overd
ri
ve. Near him—heard only by her—a crying baby's psychic plea put all her senses on high alert, because if the baby
wasn't
connected to him, she wouldn't hear it cry around him. Her plan to follow the sound and find the child—his child, she believed, and he denied—meant taking him on a journey with no destination, a concept he found ludicrous at best.

And who could blame him? If she couldn't hear the cry so clearly,
she
wouldn't have believed it.

They regarded each other in a kind of silent face-off filled with electric currents.

Aiden stroked the soft flesh of her wrist with his thumb,
sending a shiver all the way to her marrow, as fragrant
peach rose petals drifted past. His smiling Irish eyes fired
sparks of green her way as he assessed her with his hungry
gaze, touching her in places that ached for his tactile attention.

One hot
look,
and he could turn her to jelly.

"Drop the agenda," he whispered, his rough, suggestive
voice stroking more tender nerve endings, "and it's a hot date road trip in a luxury motor coach that could pamper you prissy."

"Hah.
Me, prissy?
In your dreams, Biker Boy" Maybe
she should accept the hot date road t
ri
p and let the sound
of the crying baby direct them without telling him. She
already planned to hijack his motor home along with him.
"Forget it," Aiden said, reclaiming his hand. "No road trip, and no wands or spells to get your way. Your body
language makes me twitch. Maybe I'll stay in

Translation: He could screw her senseless.

Whether he knew it or not, Aiden McCloud was going to steal her away to his home on wheels later, and she was going to let him.

For three weeks, they'd been playing a sexual version of
chicken, a bit like juggling fireballs, almost hoping to get burned. As far as she was concerned, this was more than her sister's wedding. It was an opportunity for some pre-foreplay foreplay culminating in a premeditated coed in
ferno, which might ... or might not ... take the top spot
on her agenda at the end of the day.

She'd make it happen, and she didn't need magick to pull
it off. She had a plan: a choreographed seduction ...
an
d
celibacy ... three weeks' worth. Yes, abstinence, amazingly enough, as in the lack of, as in they'd never had sex ... with each other ... a rather mystically mutual state of affairs that fit her scheme so well, she hadn't questioned it, though per
haps she should have.

Too late to worry about that now.

After the reception, if her allies played their parts, she
and Aiden would drive off alone together on a psychic
quest with sex as a bonus. Multiple bonuses, and multiple multiples ... she hoped.

The search for his child felt to her like a spiritual directive, and answering that child's cr
y
became her psychic mandate ... a matter of need meeting destiny.

Secure in the altruistic excellence of her goal, Storm beamed.

Judging by Aiden's quick physical response to her grin,
her anticipation hit him square in the libido.

Oh yeah, they were on the same wavelength, all right, both hot as lightning bolts and ready to strike.

Between them, they had sexual chemistry stockpiled in
gigawatts.

"Cut that out," Aiden whispered, turning his back on the
wedding guests to face her and hide his physical reaction. "We're st
an
ding, literally, in the spotlight. People are watching."

"Dragon's blood," Storm whispered in return, glancing down at him. "You're certainly giving them something to see.
You
cut it out. This is the bride's day. Don't you go shortchanging my
sister.
"

Storm made sure her scowl matched Aiden's, but inside,
she was rubbing her hands together in glee with a warm, tingly, sex berry gel.

Judging by his insta-boner, the role of seducer was "up"
for grabs.

Aiden leaned in, his nearness tickling her skin and in
vading her senses like whipped cream and peach blossoms.
"I'm gonna get you for this," he promised.

Dragon's blood, he looked hot. "Finally," she quipped,
tossing the proverbial gauntlet to speed her plan on its
merry way. "You'll excuse me if I have my doubts about your libido going the distance?"

Aiden straightened in indignation. "Are you kidding
me?" he snapped, forgetting they weren't alone, disbelief
in the set of his square jaw, the echo of his words causing whispers.

Storm shushed him as the strains of "Blue Moon,"
rather than the wedding march, wafted from the orchestra. She stepped forward to take the arm of the groomsman Morgan Jarvis, and Aiden stepped back to escort her sister Destiny, the maid of honor, for the trek down the garden path. At the gazebo, Aiden went to the groom's side and

Storm to the bride's, to witness the marriage of Aiden's
best friend, King, to her sister Harmony.

Now climbing the gazebo steps to meet her groom, Har
mony wore the impeccably restored gold linen day gown that had led her to King Paxton in the first place, a vintage blond lace cathedral veil trailing behind her.

When the music stopped, the bride as high priestess cast
a ritual circle that encompassed the bridal couple, the wedding party, the justice of the peace, and four cats.

In addition to Destiny and Storm, the bride's two clone
attendants, Harmony had also chosen her future step
daughter, Reggie, and her pregnant half sister, Vickie, who
positively glowed.

Standing up for King were his three-year-old grandson as
ri
ng bearer, his two best friends, and the Scot who'd knocked up Harmony's half sister and married her shortly afterward.

Capping a wedding ceremony melding Celtic and traditional elements, Harmony and King kissed as husband and wife for the first time. Applause and a hearty rendition of "By the Light of the Silvery Moon" followed them into

The constellations winked, and the moon smiled wide
as Storm anticipated seducing Badass McCloud throughout
the reception
an
d
into the night, then taking him
prisoner ..
.
likely
in shackles.

And somewhere down the road—once he willingly
joined her quest—she anticipated having her very wicked way with him.

LET
the seduction begin, her ass!

Storm paced the length of the upper gallery overlooking
the great hall. She hadn't so much as touched Aiden since before the ceremony, and that hardly counted with a hundred wedding guests watching their every move.

With the videographer at the bottom of the stairs and
the photographer at the top, she had been forced to stay on Morgan's arm as they formed part of a formal procession,
gliding up the stairs in their wedding finery to the balcony.
There, an Austrian crystal chandelier cast prismatic lights
like moonbeams on the restored gold damask walls, giving
the Victorian castle a quixotic ambience all its own. And there, the photographer and videographer got busy.

Storm failed to remain patient through the photo shoot
as she watched Aiden partnering Destiny. Okay, so the maid
of honor and best man were well-chosen, and she wasn't
one of them.
Fine.
That wasn't the point. The point was that
her seduction hadn't yet begun, and the evening was march
ing on. At least she'd get to sit with Aiden at supper and dance with him afterward.

When the bride and groom finally came up for air,
Storm stepped up to Aiden and tapped him on the shoulder.
"My turn," she said, having caught the photographer's eye, and with a promising wink, she bent Aiden over her arm and kissed her favo
ri
te stud muffin senseless.

The photographer's chuckle and multiple shutter clicks were all the encouragement Storm needed, though at some point during the stunt, both cameras and onlookers ceased to exist.

Coming up for air, Storm faced the wedding party—
some smiling, some not, but who cared? She'd taken her first step. "My bad," she said and grinned.

Looking more dazed than annoyed or embarrassed,
Aiden straightened his tailcoat and tugged on his French cuffs.

Storm fanned herself. Score one for the kidnapper.

"Tasteful, Sis," Destiny said. "Upstaging the b
ri
de on
her wedding day" A stunner in her turn-of-the-century mul
berry gown, Des was doing some upstaging of her own.

Harmony slipped her arms around them both while the
photographer and videographer kept shooting. "Don't worry
about it," she told Destiny. "This b
ri
de is used to Storm warnings. I'm betting that particular picture will be one of my favorites. I do believe the photographer caught every step of Aiden's shock ... and surrender."

What Comes Next by John Katzenbach
The Living and the Dead in Winsford by Håkan Nesser
Bound For Murder by Childs, Laura
The Apollo Academy by Chase, Kimberly P.
Deadly Edge: A Parker Novel by Richard Stark
My Rock #8 (The Rock Star Romance Series - Book #8) by Alycia Taylor
Morgan's Surprise: Powertools, Book 2 by Jayne Rylon
The Book of Daniel by Mat Ridley
Body, Ink, and Soul by Jude Ouvrard
Fire and Ash (Immortal Touch) by Allie Gail
Our partner