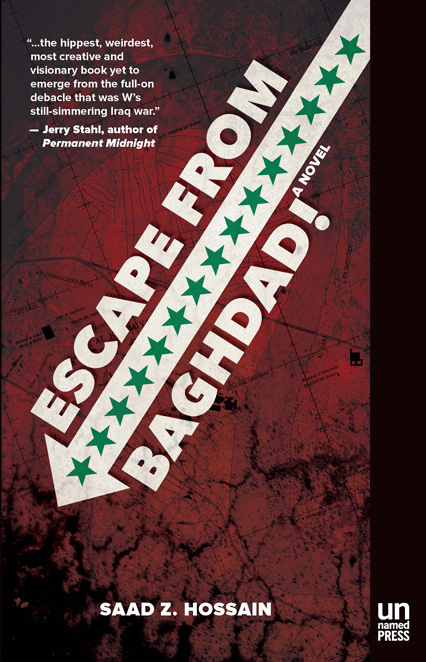 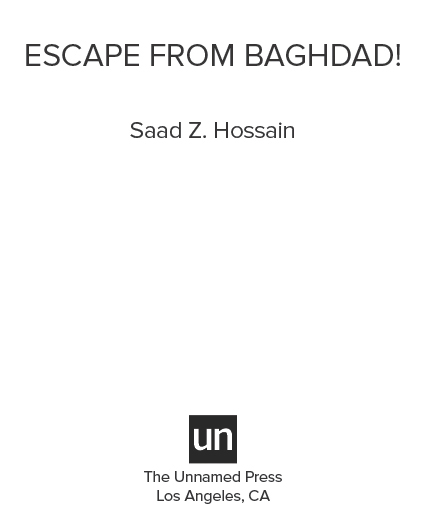 First published in North America and the United Kingdom by The Unnamed Press.

This book was originally published in 2012 in Bangladesh as
Baghdad Immortals
by Bengal Publications.

This book is distributed by Publishers Group West

This book is a work of satirical fiction. Names, characters, places and incidents are wholly fictional or are used fictitiously. Any resemblance to actual events or persons, living or dead, is totally coincidental (mostly).

Â Â
6. Tea Party at the House of Furies

Â Â
9. Inside the Watchmaker

10. Further Inside the Watchmaker

22. Meeting of the Minds

28. The Strange Island of Dr. Sawad

32. Interview with a Lion

A NOTE ON THE GLOSSARY AT THE END OF THIS BOOK

There is a glossary of mostly factual terms and names at the end of this book (“factual” being a relative idea open to loose interpretation (“loose interpretation” meaning we're aiming for a 50% chance of something on the page tallying with someone else's verified opinion.)) So, if you find yourself wondering: What's a Druze? Or who's Moqtada Al-Sadr again? Or what does JAM stand for? Or IED? Just refer to the helpful, mostly factual glossary at the end of the book.

Silence then. A kind of scathing, derisive, stifling silence expanding to fill the room, crowding out the detritus of previous conversations, leaving two blackmarketeers drinking in a darkened space, in the back of a battered house, with nothing much to say. The room was dark because they had used foil paper to blacken the windows. The lights were off because outside, the JAM militia, known as the Mahdi Army, had just torn through 13
th
Street, which was rare, because 13
th
Street in Ghazaliya was a dead-end nothing suburban thoroughfare.

“Out of principle alone, it should be done,” Kinza sipped his Jack Daniels, which he had bartered from the US Marine Ted Hoffman for a piece of Chemical Ali's skull. “Not because I hate this man. It is nothing personal for me. I am merely an agent of fate, like the Count of Monte Cristo.”

Kinza's partner Dagr received this comment without surprise or apparent concern. Though he had once been a professor of economics, it turned out the wartime shift in profession had been ridiculously easy for him.

The JAM normally preferred 14
th
Street, as it allowed them access to the northern Shi'a neighborhood of Shulla, but in this excursion they had run into the South Ghazaliya Defense Brigade, sworn to defend South Ghazaliya. The JAM often won these encounters, but recently their firebrand Shi'a patron, Moqtada Al-Sadr, had cut down their bullet rations, and today the SGD had produced a black-market US army M60 and risen to their youthful promise. All this defense had
forced the JAM into Kinza's street, a hail of smoke and diesel and bullets, AK47s popping. Kinza had brokered the sale of the M60 to the SGD in the first place,
provided they fought on 14
th
Street.

“My friend, we have a moral duty in this situation,” Kinza said.

The situation was indeed demanding of their attention, moral or otherwise. Two days ago, Kinza and Dagr, purveyors of medicine, gossip, diesel, and specialty ammunition, had inherited the living person of Captain Hamid, formerly of the 8
th
“As Saiqa” Special Forces Division, of the Republican Guard. He had been the chief savant of interrogators, vigilant against traitors to the party, known especially for his signature style and a certain personal flair to the workâan artistic flourish to the branding, undoubtedly the star striker on the torture pitch, the number 10 of all 10s, the 23 of all 23s. Now this Mother Teresa of black holes, this living spit of Torquemada, belonged to them.

This inheritance had come to Kinza and Dagr by a circuitous route. Kinza's cousin twice removed, Daoud, had been a second lieutenant in the All Martyrs of Anbar Army, an offshoot of retired Republican Guard types who had agreed to shelter the notorious Captain Hamid. This brave battalion had lasted for all of two weeks before a combined (but wholly coincidental) US and Shi'a pincer attack had fulfilled their dearest wish of martyrdom. Both wounded, Daoud and the captain had taken refuge with Kinza. The captain had survived, Daoud had not.

“Morality is for the Aztecs,” Dagr said. “We should sell Hamid to the Americans. We could probably retire on the reward.”

“Was he on the deck of cards?”

“He almost made it,” Dagr said. “I think he was ranked 56
th
. There was some talk of putting him in the second round, but I guess he just slipped through the cracks.”

“Funny, I thought he would have ranked higher,” Kinza said. “Not the face cards, maybe, but in the deck, at least.”

“We could just let him go. In Shulla, maybe,” Dagr offered quickly. “Let nature sort it out.”

Kinza made a face. That was not a solution he favored.

“We could sell him to the Mahdi Army,” Dagr scratched his head tiredly. “Sadr might have put him on
his
deck.”

“I think he made one,” Dagr said. “But he left out the queens and changed the hearts to little crescents.”

“I hate dealing with the Mahdi Army. Last time they made me pray all day and then woke me up at night to pray again,” Kinza murmured.

“Thank you, professor,” Kinza saluted him with an empty glass. “Condescending as usual. You still live in a tower. A shitty tower, but a tower nonetheless. Hatred is a physical thing. It comes from the gut. I physically need to kill Hamid.”