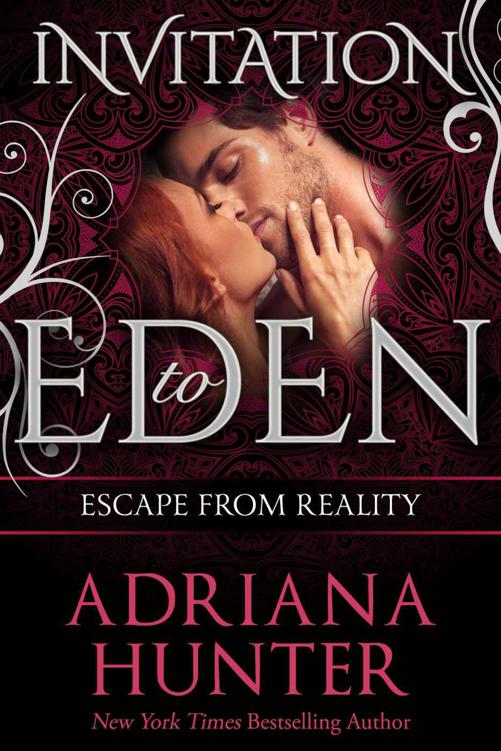 Subscribe
to Adriana’s newsletter at
http://www.SpicyTales.com
for
upcoming releases, giveaways, swag, and more!

This is a
work of fiction. All names, characters, locations and places are solely the
product of the author’s imagination.  Any resemblance to actual persons,
living or dead, including events, areas, locations, and situations is entirely
coincidental.

Where
reality is whatever you wish it to be…

Leila Connors
stepped into the elevator, dropped her bags at her feet, and punched the button
for her floor. As the doors slid shut, she closed her eyes, rolling her head
from side to side in an attempt to stretch the muscles in her neck. The
persistent knot between her shoulders that had been there since she boarded the
plane home from Austin resisted any attempt by her to unknot. She breathed out
a deep sigh of frustration, looking forward to a nice dinner, a hot bath, and
then bed. She winced at a twinge of pain in her neck; scratch dinner. She’d head
straight to the bath and then get some much needed sleep.

The Romance
Writers Association conference had been an absolute disaster. Leila had signed
up for an intensive workshop with, among others, her favorite romance author, Cheryl
Bullard, and had submitted the opening of her latest work in progress. But the
critique had gone downhill right from the reading of her opening sentence.
Everything that could be wrong with her manuscript was, or so it seemed. The
critique felt endless and by the time it was over, Leila was limp with
embarrassment and exhaustion. She felt completely defeated.

The elevator
doors swished open and she sighed again, picking up her bags, exhaustion
etching its way up her back. She’d have sworn someone put rocks in her luggage;
they seemed to grow heavier with every step she took. But her apartment was
just at the end of the hall. And then she could begin the process of forgetting
about the horrible trip and get back to her life.

Stumbling down
the corridor, she finally made it to her apartment, immediately noticing a
small cream-colored envelope tucked beneath the door, its edge peeking out.
Oh
God, it was probably from the building super or her landlord.
Her sigh this
time was louder, her mind running through all the possible scenarios, none of
them good, which would result in a note being left under her door. Had a tenant
in the upstairs apartment forgotten to turn off the water and her apartment had
been flooded? Had she, herself, left the water running?

Her bags hit
the floor again and she quickly unlocked her door, pocketing the key. She bent
and retrieved the envelope, turning it over, her confusion only deepening. Her
name on the envelope was handwritten in a delicate script, flowing and elegant.
She could almost swear it looked like it had been written with a quill pen.

This was no
note from her landlord or the superintendent. Curiosity piqued, she slid a
finger beneath the flap and extracted a thick, folded creamy sheet of paper.
She unfolded it and began to read.

Leila’s eyes
widened in disbelief as she read the note. This had to be a joke, someone’s
idea of sick humor. She read the note again, her brows drawing together.
It
couldn’t be.

Leila jumped,
startled, clutching the note to her chest as she turned. Her neighbor, Jordon Richards,
was standing behind her, peering over her shoulder.

“Oh, to a
party?” His eyes lit up and he favored her with what she thought he probably
considered a charming smile. “How fun.”

Much to her
consternation, Jordon leaned against the wall next to her. They’d gone out
once, for drinks in the hotel lobby next door. Leila had been taken by his boyish
good looks; high cheekbones, blond hair, perfect teeth. He was tall,
broad-shouldered, and carried himself with all the confidence of a real man, so
it hadn’t taken much for her to get caught up in the perfect gentleman.

Or so she’d
thought.
She’d eagerly
agreed to drinks, carrying the fantasy that maybe she’d finally found the man
of her dreams, living right across the hall from her of all places. Perhaps her
luck was about to change and a real relationship would blossom.

But Jordon had
turned out to be as boorish as they come, interested in only talking about
himself and his many successes. The drinks devolved into a walk outside, even
though Leila wasn’t dressed for a midnight ramble, where he insisted on telling
her just how lucky she was to be on a date with him. She’d finally gotten him
to take her home, desperate to escape. Sometime early in the evening, she’d
decided he would not be invited into her apartment for a nightcap. But Jordon
had other ideas. He’d pressed her against the wall outside her apartment,
swooping in for a goodnight kiss that turned into an uncomfortably long and intimate
one, far too intimate for Leila’s liking.

She’d wiggled
out from beneath him, pleading an early day at work before finally disappearing
into her apartment. She had tried to avoid him ever since.

“Oh, what a
shame. We could have had a good time together. I would have been happy to go
with you.” He detached himself from the wall, moving closer, shifting his body
so that he had her pressed against the door of her apartment. His cologne
overwhelmed her as he leaned closer, his hot breath fluttering over her neck.

“I had a good
time, Leila. We should go out again. Or, we could always stay in.” He ran his
hand up her arm, squeezing her with long fingers.

“Then staying
in would be perfect.” He leaned in closer still, his mouth coming down on hers
as his hand moved from her arm to slide across her breast, squeezing hard.

Leila stiffened
at the touch of his lips on hers and the rough touch of his hand, appalled by
his audacity. As his tongue probed her tightly clamped lips, he thrust his knee
between hers, parting her legs, rubbing his thigh against her body.

The crack of
her hand against his cheek was surprisingly loud and more painful than she
would have imagined. Jordon jerked back instantly, his eyes going dark, brow
furrowed.

“I…I’m…” An
automatic apology rose to her lips, but that wasn’t really what she wanted to
do. Fumbling behind her, she opened the door to her apartment, reached down,
and grabbed her bags, backing through the door. Jordon took a step forward, but
she slammed the door before he could get inside.

She looked at
the closed door a moment then quickly reached out, turning the lock. There was
a thud from the other side, possibly Jordon kicking the door, and a muffled
curse. Leila took an instinctive step backward, her hand on her throat.

Then there was
silence and she ventured forward after a moment, peering through the peephole.
She caught a glimpse of Jordon entering his apartment and heard the resounding
slam of his door.

Leila turned,
heading for the couch. She collapsed onto the cushions, leaned back, and closed
her eyes. This day had just gone from bad to worse. Jordon was one more
example, proving once again that Leila was a failure when it came to men.
Someone at the conference had suggested, rather strongly, that her inability to
craft a believable romance might stem from her own lack of experience. She’d
wondered at the time if someone had read her journals or her mind but dismissed
that line of thought as completely absurd, bordering on paranoia.

It had occurred
to her though, more than once, that not being lucky in love might impact her
writing. Even though the dictum of write what you know was often touted as the
first rule of writing, romance or otherwise, she didn’t take that to heart.
After all, there were many popular crime and thriller writers who had never
carried out a jewelry heist or killed anyone, and their books were wildly
successful.

With a sigh, Leila
realized she was still clutching the now crumpled note in her hand. Smoothing
out the paper on her knee, she read through it one more time.

It was an
invitation, not to a party, but to an exclusive weeklong writing retreat. The
invitation came from not just anyone, but from Cheryl Bullard herself. The note
went on to explain that while Ms. Bullard realized Leila’s experiences at the
convention may not have been all that positive, she had recognized something in
Leila’s writing, a certain creative spark that, with intensive and personal
attention, would help Leila blossom into the romance writer Ms. Bullard knew she
could be.

The rest of the
note held instructions for Leila to arrive at the helipad atop the
Norris-Marcum building, not far from her apartment. There she would be taken to
the location of the retreat, which would be held in secret. Everything she
needed would be provided, including her attire for the week. She was to bring only
her passport. The note also held assurances that arrangements had been made
with her employer, granting her immediate leave.

Leila sat for a
moment in the late morning light, stunned, trying to imagine what it would be
like, traveling to some remote location, spending a week with Cheryl Bullard
herself. Leila’s heart stuttered in her chest just thinking about being alone
in the same room with the romance mogul. The woman’s novels were epic, deeply
romantic and sensual, her characters so alive on the page that when Leila set
down one of Ms. Bullard’s books, she was incapable of writing for days, her
thoughts scattered, her mind constantly going back to the scenes in the book.

The note listed
three o’clock that afternoon as the departure time. Leila glanced at her watch.
It was just before two. If she took a shower, changed clothes, and grabbed her
cosmetics bag from her luggage, she might just make the deadline.

Leila shook her
head; it was all madness, some horrible prank. Things like this just didn’t
happen. Or they only happened in fiction. This was real life…
her
life.

A loud bang on
her door and the harsh voice of Jordon Richards on the other side brought her
bolt upright on the couch. She couldn’t hear the words, but the tone was
belligerent, angry, and possibly drunk. Then the voice faded down the hall and
was gone. The thought of spending a week away from Jordon was the deciding factor.