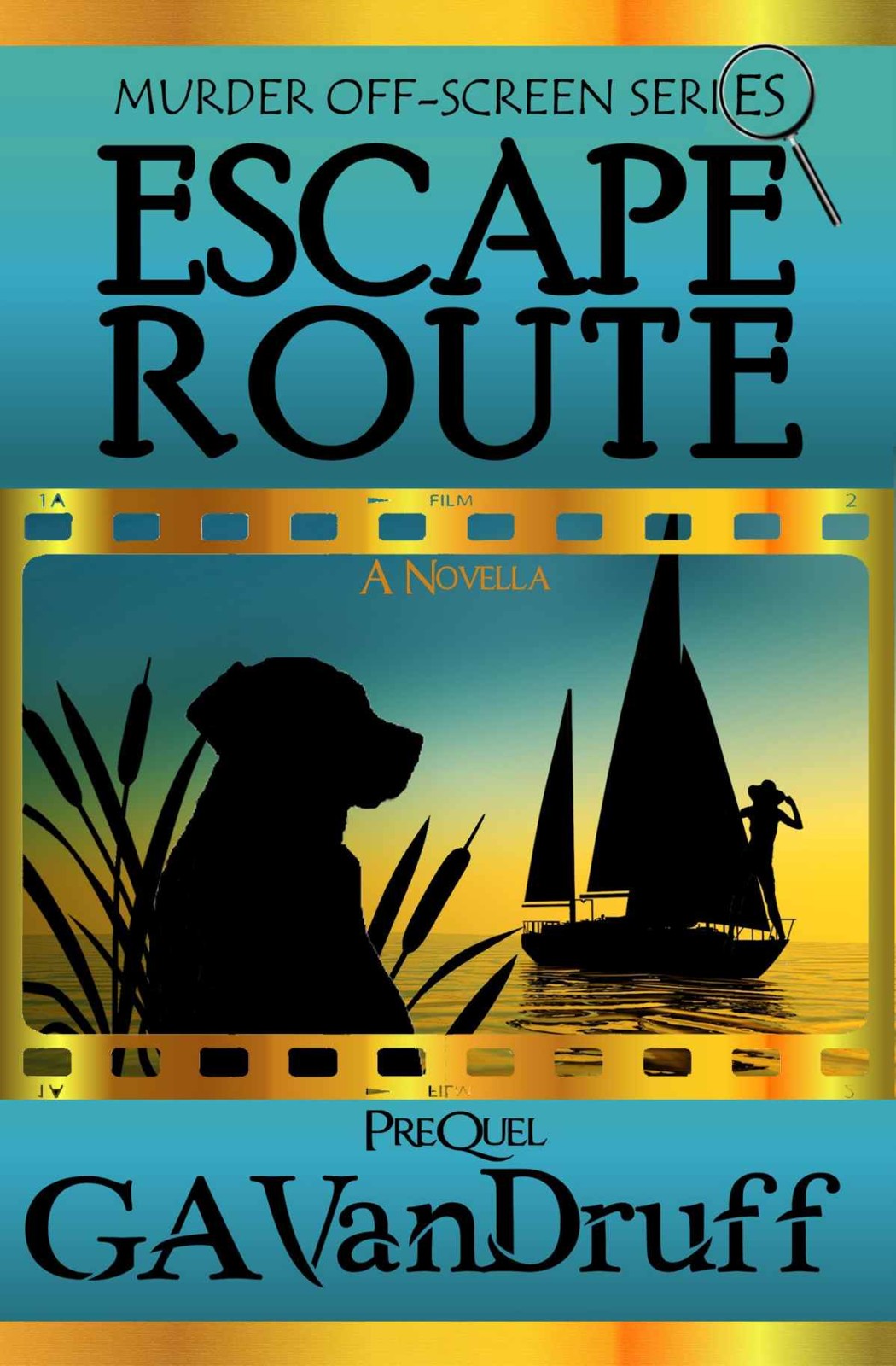 This is a work of fiction. Names, characters, organizations, places, events, and incidents are either products of the author’s imagination or are used fictitiously. Text copyright © 2016 GA VanDruff. Kindle Edition. All rights reserved. No part of this book may be reproduced, or stored in a retrieval system, or transmitted in any form or by any means, electronic, mechanical, photocopying, recording, or otherwise, without express written permission of the author.

All rights reserved. No part of this publication may be reproduced, stored in a retrieval system, or transmitted in any form or by any means, electronics, mechanical, recording or otherwise, without the prior written permission of the author. The characters, incidence and dialogs in this book are of the author’s imagination and are not to be construed as real. Any resemblance to actual events, locales, or persons, living or dead, is entirely coincidental.

Escape Clause
, the first book in the series, is available at Amazon. I’ve also added the first, exciting chapter of
Escape Clause
at the end of this book, so you can jump right back into the story. Thank you for joining Jaqie, Doofus and José on their adventures.

“Jaqie, the limo is here,” Jeep shouted through my bedroom door. “We’ve got to go.”

“Stop. Stop it. The limo is
not
here,” I shouted back, twisting around from my position on the floor, snatching a glimpse at the clock on my nightstand before the vicious, elastic bodysuit wrestled me back in place. “I’ve got twenty minutes.”

Madrille Keiser had sent over a dress, and the underpinnings, for my big night at the Oscars. When the top actress in Hollywood sends you underpinnings, you wear them, even when the dress is a size zero and you are not. I’d not been nominated for anything—I was going as Jeep’s Plus One but, hey—the Oscars—and I couldn’t wait.

I did immediately return the included
crate
of diamond necklaces, bracelets, rings and assorted crown jewels. I don’t wear much jewelry, and what I do have, I got as prizes from gum ball machines.

I laid flat on the rug, grabbed the flesh-eating microfiber body underpinning by what appeared to be the hip area and yanked it up by millimeters while I writhed in the opposite direction. The guy who designed this contraption, first of all—hates women, and meant to reshape my total body mass index until every ounce of my one-hundred-seventeen pounds was re-engineered into gravity-defying cleavage with Sponge Bob legs.

Maddie insisted she send along her entourage to guide me through the process, but temporary insanity had told me to decline the offer. It’s a dress. Who needs guidance to put on a dress? And Raoul, her personal hair stylist, scares me to death. Rumors involving chickens and cleavers. I played it safe with a ponytail and the sparkly rhinestone clip I wore to the prom eight years ago. ‘Rhinestones set off your dark hair, sweetheart,’ Aunt B said, and FedExed it to me the next day from Maryland. From home.

“Jaqie Lynn Shanahan, I’m not kidding. They need me on the red carpet early for the interviews.”

“You have a little black book, Jeep
Pushy
McBain. You should’ve invited one of them to go with. They wear less than I do. Shorter prep time.”

“Come on, it’s my first script. My first nomination. This night is so special. I mean, Jaqie, I don’t want to throw up on anyone else but you.”

“I get it. Special. Throwing up. Middle name
not
Lynn, by the way.” I was a Spandex tube, a sausage link, half under my bed, half out. I grabbed the bedpost and hauled myself up like that sack of sand hangmen use to test the rope, and hurled myself into the middle of the bed, rolling until I was centered under the ceiling fan. The dress hung there, mocking me, waiting to see how I planned to pull this off.

My cunning bit of stratagem was nothing short of inspired. I squatted in that position you see in the
National Geographic—
women in a hut gathered around a pot—put my hands straight overhead and vaulted into the dress through the bottom. Worked like a charm. I had to tug it over my newly acquired bosoms. The underpinnings had done their job.

I could not walk. Could not breathe. Or sit.

My knees clicked and clacked together as I staggered to the mirror on the back of my bathroom door. I couldn’t believe my makeup had withstood the assault, so one more slosh of gloss and my
toilette
was done.

I snapped the rhinestone clip around my ponytail. “Looks good.” Aunt B was right, as usual.

“Hey?” Jeep rapped on the door. “You need me to zip anything?”

“Come in. I need you for the last bit.” No zippers, but I had a pair of twenty-first-century torture devices to screw onto my feet, engineered, no doubt, by the dress designer’s mentor.

Jeep’s been my roomie for three years. I’ve never seen him gape at anything.

“Wowzer.” He strolled around me, gaping and wowzering the whole way. “Where’d you get the bazooms? You did not go have implants—”

I smacked him. “They came with the dress. Ew. Stop looking at them.” Jeep’s my unofficial brother. Brothers are not supposed to ogle, even in Hollywood, although, exceptions have been made.

“I think it’s like a hologram. Depends which way you look at it. You’re pretty wowzer yourself, mister.” Jeep mainly wore baggy shirts, droopy shorts and disintegrating sandals. The navy blue tux and blazing white shirt was downright dashing. His rock star hair, the close-trimmed beard framing those cheekbones would get him into any of tonight’s After Parties.

He held out his hands. “What can I do to speed this along? The limo
really
is due any second.”

I fell straight back on the bed like a toppled tree so I wouldn’t wrinkle, and wriggled my feet. “Shoes. Do whatever it takes. I may need to bite down on a piece of wood.”

He set a shoe with a razor thin, twenty-eight-inch heel on either side of me and grimaced. “Final words?”

“Funny.” I gripped the bedspread. “Listen, Jeep, I’m so proud of you, you know?”

“I—know—you—are.” He stood up and pushed the hair out of his eyes. “There. One down. Why do you women wear these things?”

I unclenched my jaw. “
Cosmo
says to make other women jealous.”

“No kidding? Huh.” Jeep stepped back and inspected my shod foot. “It reminds me of those dancing hippos.” He snapped his fingers. “
Fantasia
! Those enormous feet in those tiny, little shoes.”

I re-clenched my jaw. Clearly, he was out of his mind with excitement.

He picked up the other shoe. I clamped my eyes shut, and said, “You’re going to win. I can
feel
it right here.” The only surface area on my body that still retained any sensation was my left eyelid, so I took a stab at tapping in the general location of my heart.

“Listen, Jaqie, after—tonight—things—are—bound—to change.” He took a gleaming handkerchief out of the inner pocket of his tux and patted his forehead.

I stayed perfectly still, waiting for my feet to go numb. “I know. Everyone’s going to want you—”

“Yeah, yeah, but I have something to say to you.” He sat down next to me, and kept an eye on my ankles for any sign of the onset of gangrene. “Your movie is coming out in a few months. Madrille Keiser is sure to be nominated. So are you.”

“Do you think? We worked so hard. She’s a great homicidal maniac. Terrifying, actually.”

“I believe it.” Jeep fist-bumped his chest, stood and paced the room. “So, anyway, I paid the rent on our two-bedroom dump here for the next three years.”

I pushed up on my elbows. “Why? You’re super rich, now. Why would you stay here?”

He ran his fingers through his trademark hair and glanced at me sideways. Jeep McBain truly was a lady killer. If he could act, he’d have fit in with any of the big names who were re-touching their Botox injections at this very moment.

“We work so well together—three years, you know what I’m saying, I thought we could keep this place—if you want—and either stay on living here, fix it up, maybe, or at least use it as our workspace.”

I hadn’t thought far enough ahead to think of life here without Jeep in it.

“I’m game, if you want to keep it.” The tingling in my feet was subsiding. “For sure, we can do that. I’m just surprised you’d want to, Mr. Big Oscar Winner.” The expression on his face did not match his bright and shiny future. “Why so serious?”

Oh, no. Jeep wouldn’t ruin our relationship with a proposal, would he? My divorce was four years behind me, and I wouldn’t say no to dinner and a movie, but not with Jeep. I didn’t feel that way about him.

I sucked in a breath which contracted my waist yet another quarter-inch, and threatened to hurl my bazooms into the ceiling fan. What would I say? The caravan of girls he’d been involved with would kill to be engaged to Jeep McBain. Would I be crazy to turn him down?

“Here.” He held out his hands, took mine, and levered me up like a wood plank.

He held up a stop hand. “I want—
need
—to show you how much you mean to me. You’re my safe place, my touch stone. I couldn’t love you any more if you were ... if you were Sachi Michelle.”

A horn beeped three stories down. Our walk-up had no bell.

We looked at each other, grinning like fools. This was it. The big time blowing its horn for us to hurry up.

“Here,” he slid something from his pocket, “this is for you.”

I closed my eyes and, full of dread, unfolded my hand. “What is it?”

That was the last time anybody saw him.