Read Everything to Nothing Online 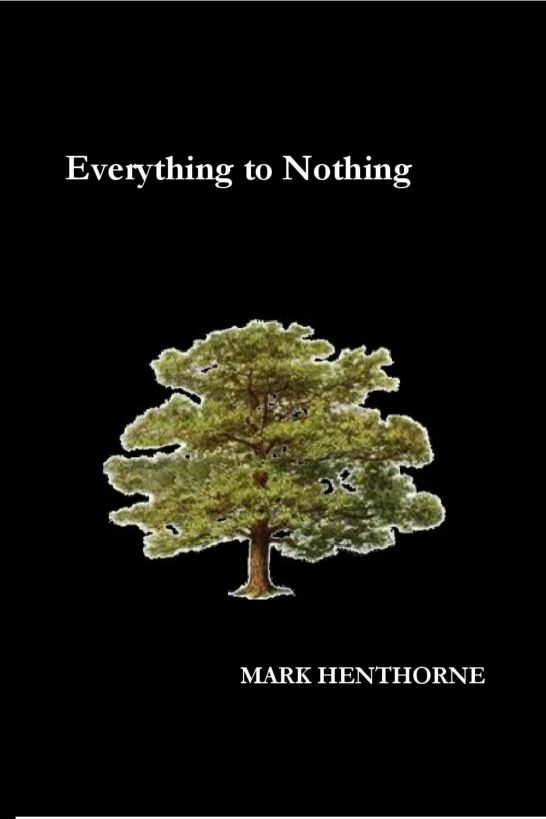 A novel by Mark
Henthorne.

Published by
Mark Henthorne at Smashwords.

This book is
available in print at most online retailers.

All rights
reserved. No part of this publication may be reproduced, stored in
a retrieval system, or transmitted, in any form or by any means
without the prior written permission of the author.

This ebook is
licensed for your personal enjoyment only. This ebook may not be
re-sold or given away to other people. If you would like to share
this book with another person, please purchase an additional copy
for each recipient. If you’re reading this book and did not
purchase it, or it was not purchased for your use only, then please
return to Smashwords.com and purchase your own copy. Thank you
respecting the hard work of this author.

All characters
in this publication are fictitious and any resemblance to real
persons, living or dead, is purely coincidental.

‘Please, not
tonight! I implore you, please, not tonight!’

With another
cough and a splutter the engine slowly came to a halt with steam
pouring from under the bonnet and the young woman who was driving
slumped in her seat as she looked out into the dark night.

It was a dark,
dreary, miserable night and the rain was beating down on the road
savagely. Not more than two minutes earlier she has passed through
a flood under a railway bridge that quickly flooded her old Mini’s
engine. Unfortunately for her, at this time of night the road was
deserted. Surrounded by fields and darkness she slowly felt fear
descend upon her, yet she was aware enough to control herself and
she tried to think clearly.

Quickly, she
grabbed her top of the range mobile phone out of her Gucci handbag,
both presents from her father, and as quickly as she had grabbed
her phone she flung it into the empty passenger seat when she
realised that there was no signal. Panic was now starting to mingle
with the fear and she peered through the steaming-up windows into
the darkness.

A memory
managed to surface through the fear and she remembered that there
was an emergency phone back at the railway bridge. Reluctantly,
tentatively, she exited the car, her scantily clad body shivering
as the rain slammed into her flesh, and she walked back to the
bridge.

She did not
know that while these events were unfolding a pair of eyes was
watching her.

‘Pardon me?
What do you mean you can’t help me? I’m a young lady whose car has
broken down, and I feel a little scared right now as it is quite
late and I’m on my own.’ She had successfully reached the phone
that was at the railway bridge. The lady on the other end of the
line sounded bored, very bored.

‘I’m sorry, as
I’ve told you; this phone is solely for the reporting of accidents
concerning the bridge. We are not a breakdown service.’

‘But, but,
could you at least pass a message through to a breakdown service
for me, or maybe the police?’

‘Look, you are
being terribly unreasonable…..’

‘I’m not being
paid to listen to abusive phone calls…..’

‘I’m not being
abusive!’

‘I have given
you a warning. I am now terminating this call. Make no attempt to
call back.’

But she was
only talking to a ring tone.

Now panicking
even more she made her way back to the car and slumped into the
driver’s seat. Struggling to think because of the fear and also now
because of the cold, she thought that she vaguely remembered that
there was a garage about half a mile further on.

She searched
through her Gucci bag but this time she pulled out a bright red
device about the same size as her mobile phone. It had a switch on
one side and circular strap at the end, which was attached to a pin
that was plugged into the device. She slipped her hand through the
strap and pulled the device sharply away from her wrist disengaging
the pin. The device emitted an unbearably loud, high-pitched noise
which caused her to screw up her face in distaste and she did not
let it ring for more than a few moments before re-inserting the pin
which made the noise cease.

After taking
the keys out of the ignition, she opened the door, stepped out,
shuddered, closed and locked the door and started on her lonely
walk to the garage.

Simon had long
given up waiting for his date. He had called and called her but his
calls went straight to her answer phone. It was almost like her
phone did not have any signal or it was switched off. So now he was
with his friends in a bar in the local town, drowning his sorrows
at being stood up by his beautiful date. His friends talked as
young men of that age talked; one minute it was football, the next
the young women in college, then back to football. Simon though was
not really listening. All he could think of was the gorgeous woman
who should have been with him at that moment. Her thoughts though
were not turned to him anymore as her night was just about to get a
lot worse.

The rain showed
no sign of abating. If anything, it seemed to her to be getting
heavier. Ten minutes had passed since she left the car and she
topped a rise in the road. She stopped walking and gazed narrow
eyed through the rain. There, only a few hundred meters away was
the garage. She let out a sigh of relief

Fields
surrounded the garage and directly on her left was a hedge that ran
from the railway along the road. On the other side of this hedge
there was only darkness, and as she stood peering into the
distance, seemingly through the hedge a figure appeared.

‘Now you’re
very young and very sexy to be out all alone at night!’

He was on the
other side of the hedge, peering through it, listening to the
starter motor turning over, trying to get the engine going. He had
a rudimentary knowledge of mechanics and he could tell that the
Mini was not going anywhere just by listening to the attempts of
the engine to start. He rubbed his hands with obvious glee and a
grin appeared on his face that could be said to not belong on the
face of a sane man.

He always came
to this spot when there was heavy rain. The road under the bridge
did not drain properly and it always flooded. A number of times he
had seen cars break down due to a flooded engine, but up until now
the occupants had never been what he desired, a single woman on her
own.

This woman was
young and no doubt fresh so he thought. She was dressed incredibly
sexily. Low cut top, push up bra, which showed her large breasts
off to perfection, and a very short skirt that displayed her long,
tanned legs. This woman had already been down to the bridge and as
he watched her through the hedge making the phone call he
masturbated. He heard what she said he was that close to her and he
liked her voice. He imagined what her scream would sound like as he
parted… The thought was lost.

A grin appeared
on his face as he saw her slam the handset down and watched her
walk back to the car, muttering and cursing to herself. He
continued to peer through the hedge as he walked, continued playing
with his penis.

As she reached
the car, he thought to himself that he should strike now, but he
decided against it as he correctly guessed that she would now walk
to the garage.

As she saw the
figure step out in front of her, her eyes were automatically drawn
to his erect penis and for a moment she froze. He was slobbering
and drooling as he reached for her, his penis throbbing against his
stomach and as his hand closed around her upper arm her survival
instinct took a hold of her.

In a split
second she pulled the strap on her rape alarm, pressed it against
his ear and then drove her knee into his groin area. She saw him
wince as the noise blasted and screamed into his ear, heard his
breath leave his body in a big rush as her knee connected and then
witnessed him falling to the ground, moaning and groaning.

She stood over
him for a few moments, trying to get her shocked breath back, the
alarm still raging in her hand unnoticed. She gave him another kick
in the groin just to make sure, and then ran for the refuge of the
garage.

From a
distance, Michelle spotted Simon from across a crowded bar. To say
she was surprised to see him would be an understatement. When a
young gentleman has arranged a date with a stunningly beautiful
young woman it is more traditional for the gentleman to turn up to
the date.

Michelle
thought about going to speak to him but from what she could see he
and his friends looked very drunk even thought the night was still
quite early and that was a confrontation she simply did not want to
have. Instead she excused herself from her friends and exited the
bar to make a phone call.

She dialled
Sally’s mobile number that she knew from memory but she only got
her voice mail. She left a message and then searched her phone’s
memory for Sally’s home number, a number she rarely called.

A cultured,
well-spoken voice answered the phone. ‘Hello. How may I help
you?’

‘Hello. Is that
you Alfred?’

‘Indeed it is.
How may I be of assistance?’

‘No. She
departed at around 8 o’clock in her Mini and has not been home
since. Whom is it that is calling?’

‘Ahhh,’ his
voice noticeably brightened, ‘young Michelle! I presumed, as does
her father, that she was with you.’