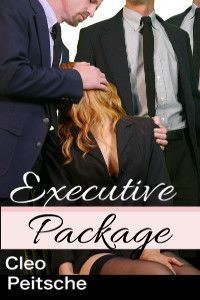 EXECUTIVE PACKAGE
© 2014 by Cleo Peitsche. All rights reserved worldwide. No part of this book may be reproduced in any form or by any electronic or mechanical means without permission in writing from the author. This is a work of fiction. All names, characters, events, locations and incidents are either the product of the author’s imagination or are used fictitiously, and any resemblance to any persons, living or dead, events or locales is entirely coincidental. This book is for entertainment purposes only.

This book contains mature content and is solely for adults.

Thank you for purchasing this ebook. I hope you enjoy reading it as much as I enjoyed writing it, and I look forward to sharing more of my stories with you.

Other Titles By Cleo

The very words struck fear into Elle’s heart. She stood across from the grandiose building, clutching the glittering purse that Jonathan, one of her bosses, had given her earlier that day. Her hair and makeup were professionally done, and the long, shimmering red dress clung to her curves exactly as the designer had promised.

Elle’s three bosses and lovers had spared no expense. This was the evening they presented her to their world as their girlfriend, and they wanted her to feel like she belonged.

In the office that afternoon, Elle locked herself in a conference room and practiced walking in the tight dress. After she managed that, she worked on sitting without collapsing into the chair like a sparkly red sack of potatoes.

And here she was, all dressed up and afraid to enter the building. A frostily beautiful blonde passed close by, a wave of expensive perfume in her wake. The woman’s long, toned legs flashed through the thigh-high slits in her liquid golden dress. She walked like she’d been born to this. She probably had been.

An attendant opened the door for the woman, and soft, melodic strains of violin floated out of the building. If the musicians were still playing, then Elle wasn’t late. Yet. Her mouth went dry. Her lovers would be wondering what happened to her. She squeezed the purse and shifted her weight from one stiletto-heeled foot to the other while she tried to calm her panic.

She closed her eyes and Cunningham’s handsome, stern face hovered in front of her. She shook her head. If she went home, Cunningham would take it the hardest. She didn’t want to let him down… but she couldn’t bring herself to go in, either.

She turned and found herself staring up into Nolan’s intense blue eyes. She frowned and licked her lips, her mind registering how his tousled dark hair had been tamed for the occasion, and the tuxedo he wore fit his athletic frame perfectly. His smile was magnetic, pulling her closer to him.

“I thought you’d be inside by now,” she said, her voice small.

Nolan nodded a greeting at someone passing behind them, then his gaze returned to hers. His eyebrow crept up. “And I thought you’d be standing out here, trying to talk yourself into coming in.” His deep voice crawled seductively along Elle’s skin. He offered her his elbow. “It’ll be ok. We won’t leave your side.”

When Elle didn’t take his arm, Nolan did it for her, slipping her arm through his, but she stood rooted to the spot.

“The whole point is for everyone to know, and who cares if they approve?” Nolan’s eyes were darkening, which meant he was angry. “You know the best part about being rich?”

Thinking it was a rhetorical question, Elle didn’t reply. In fact, she knew nothing about being rich apart from what she’d observed since starting at Cunningham & Associates.

“The very best part about being rich?” he repeated, his voice rising. Elle ducked her head nervously, the tips of her ears heating.

Nolan laughed. “Go on, Elle, take a guess,” he said, his voice booming.

She shrugged helplessly, her fingers clutching the purse.

“The very best part about being obscenely…” He threw his arms wide open. With his toned body in the elegant tux, he looked like a secret agent. “… Disgustingly…” He turned in a circle. “… Filthy rich is—” He raised his arms, his tuxedo jacket tightening across his broad shoulders. He was an attractive man, with an elegantly muscular body and classically handsome features. People were staring, but Nolan continued, oblivious. “… Is not having to give a
damn
what anyone thinks!” he roared.

A group of five guys around Elle’s age—early to mid-twenties—were passing by. “Hell, yeah,” one of them said. They wore black sweatpants and matching hoodies with
Deathtrap Stunts
embroidered across the chest.

Nolan reached into a pocket and pulled out a few bills. “Do you have a moment?” he asked.

The guy who had spoken paused.

“You do stunts? Can you do a cartwheel?” Nolan asked.

“I can,” one of his friends volunteered with alacrity, his eyes trained on the money in Nolan’s hand. “Flips, too.”

“Can you?” Nolan raised his eyebrows and turned to Elle. “Did you hear that? This young man can do a flip. Would you like to see that? I know I would.”

The five guys jostled each other. Elle pressed her fingers to her temple. Nolan was older than she was, but he was still only in his late twenties—it was ludicrous for him to refer to anyone out of diapers as a “young man.” She snuck a glance at the imposing building, wondering what would happen if she made a run for it, hid in the bathroom. Unfortunately, a small group of well-heeled attendees paused at the entrance, their attention likely first captured by Nolan’s lunatic screaming, and now they waited, curious to see what would happen next.

“I can do a flip, too,” another guy volunteered. The skin between his eyebrows was pierced with a miniature barbell, and tribal tattoos crawled along his neck.

“Me, too.” The speaker indicated his friends with a jerk of his head. “We’re part of a stunt team, right.”

“Yeah. We wish. We do the hard work, they get the credit.”

“How about a fight?” Nolan asked. “Make it look good.”

The guy who couldn’t do a cartwheel held up his phone and a pair of quarter-sized black ovals. “Music and speakers.”

“Perfect,” Nolan said. He handed each of the stuntmen five one-hundred dollar bills. “Is that fair?”

“Better than we got filming on set today.”

Nolan peeled off two more bills for each of them. “Show my girlfriend your best routine. Oh, and I’m not liable if you split your heads open,” he added. Elle gave him a dirty look for that, but he shrugged it off, the light scents of Oakmoss and aftershave rolling off of him.

“No worries. We’re pros.” The guys shoved the money into their pockets, huge grins on their faces. Elle shifted uncomfortably. She had no doubt that they’d go home and talk about the crazy rich guy who was giving his money away.

Nolan slipped his arm over Elle’s shoulder as a ground-shaking bass beat exploded from the tiny speakers. The guys did a quick stretch. Some sort of invisible signal passed between them, and then fists were flying.

Elle gasped as one of the guys slammed his fist into another’s solar plexus. He backed up, and his friend wobbled around for two steps, then hit the ground, his legs flying up like one of the Three Stooges.

“Look around you,” Nolan whispered into her ear. “What do you see?”

She stiffly glanced about. “I see people who are going to be late for the awards banquet.”

“I see folks enjoying themselves. You’re the only one who’s worried.” He smirked that infuriatingly smug, prep-boy smile of his. Whenever she considered retiring the label, he went and did something like hiring a bunch of passersby to entertain him. Yup, he was spoiled through and through, and she couldn’t believe that she’d even considered thinking otherwise.

“It’s not so bad to be the center of attention,” Nolan said, “and you can’t hide away just because you’re worried that people are talking about you.”

“What?” she asked peevishly.

Nolan fixed her with that look, that one that meant he knew her better than she knew herself. Which was pretty accurate. Despite his foibles, he was usually the first to realize when problems appeared in the relationship. He’d predicted that she’d fall for Cunningham. He’d befriended her when she was at her loneliest. He also had predicted that she’d choose to marry Cunningham when the time came, though Elle wasn’t sure if he realized she’d overheard that.

He brushed the tip of her nose with his finger. “You’ve been holed up in the office working nonstop. Why?”

“Because it’s my job and my boss is a slave driver.”

He laughed. “Point taken, but Cunningham never wanted you to work until 10:00 at night.” He shook his head. “It was your idea that we all live together, but now you’re too busy to go house hunting. So let’s get the relationship out there. We’ll do it fast, in front of everyone, like pulling off a bandaid.”

“That’s not a flattering image. And anyway, yanking them off fast still hurts,” Elle pointed out, crossing her arms awkwardly over her chest.

“Since when are you afraid of a little pain?”

The five guys were now kickboxing. Other than a lack of blood, it looked real. Quite a crowd was forming, shiny faces excited at the spectacle.

“Can we go in?” Elle asked. Between a roomful of judgmental millionaires and billionaires and the one perceptive, unrelenting billionaire that was Nolan, Elle decided to choose the lesser of two evils.

“I thought you’d never ask.” He offered his arm, and this time Elle accepted, leaning into his solidity.

She kept a death grip on Nolan as they entered the ballroom. It was larger than she’d been prepared for, filled with a sea of white-draped tables. She smelled the flowers almost before she noticed the centerpieces bursting with perfect, delicate pink roses. Perhaps due to the impromptu street fight that Nolan had orchestrated, a full third of the invitees were still missing.

Which meant that two-thirds were seated, their sleek heads tilted together in whispered conversations. A woman’s high laugh tinkled through the room. As they progressed, curious eyes turned toward Elle and Nolan.

“Breathe, Elle,” Nolan ordered, “or I’ll be forced to give you mouth-to-mouth right here. For your own good, of course.” His hand was pressed hard on hers, keeping her from running in the opposite direction.

The table for Cunningham & Associates was located at the very front of the room. Cunningham and Jonathan waited there in identical black tuxedos.

Jonathan saw her, and he stood, nudging Cunningham, who turned and rose to his feet. Both men stared at her hungrily, and Elle suddenly felt like the air had been sucked out of the room. All the conversations had stopped, and the only noises were the soft scuffles of Elle’s and Nolan’s shoes on the carpet.

A wisp of her reddish-brown hair escaped the loose updo. Elle shook it out of her eyes and licked her lips again, which had gone dry.

By the time they reached the other two men, she was trembling all over. She looked up into Cunningham’s dark eyes, pleading silently with him, but knowing it was futile; he would never be the one to take pity on her, and Jonathan and Nolan had been in full agreement about what would happen this night.

Salvation on Sand Mountain by Dennis Covington
Honor's Paradox-ARC by P. C. Hodgell
The Redhead and the Preacher: A Loveswept Historical Romance by Sandra Chastain
Freezer Burn by Joe R. Lansdale
Retribution by Burgess, B. C.
Hide and Seek by Lara Adrian
My Latest Grievance by Elinor Lipman
Roses for Mama by Janette Oke
A Mended Man (The Men of Halfway House Book 4) by Jaime Reese
The Age of Wrath: A History of the Delhi Sultanate by Abraham Eraly
Our partner