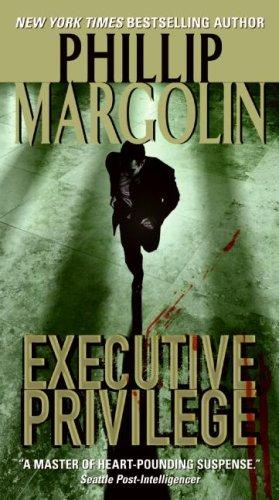 On January 8, 2007, at 1:40 in the afternoon, Doreen,
my wife for thirty-eight years, passed away.
She was my hero, the personification of class,
and as close to perfect as a human being can be.
Everyone loved her. She lives on in my heart.

Brad Miller woke up at 6 A.M. even though his…

Part One
A Simple Assignment

Charlotte Walsh looked up from the economic report she had…

Early in his presidency, Christopher Farrington had felt like a…

Dana Cutler was bored out of her skull. After three…

As soon as Charlotte Walsh was in the backseat of…

When he arrived at the farm, Charles Hawkins was escorted…

Jake Teeny had an exciting job that took him to…

Shortly after moving to Portland to take a job with…

The trip down I-5 from Portland to the state penitentiary…

Keith Evans was exhausted. As the agent-in-charge of the D.C.

Dana drove random routes until she found the type of…

The chambers of the United States Senate were impressive but…

“Where the hell have you been?” Perry demanded angrily when…

Christopher Farrington had been in Iowa campaigning when the police…

Keith Evans had no social life, so spending the weekend…

On Saturday morning, Brad Miller drove to Salem for his…

Sunday morning, Brad and Ginny drove down I-5, past the…

“There’s a call on two,” the receptionist told Keith Evans.

Andy Zipay’s office was on the third floor of an…

Half an hour after leaving Dale Perry’s law office, Keith…

There was nothing friendly about the surroundings in which Eric…

It was the third item on the eleven o’clock news…

Claire had finished reading this evening’s installment of Peter Pan…

Brad smiled as soon as Ginny walked into the bar…

Exposed was under siege. Arrayed behind barriers erected by the…

When Charles Hawkins drove through the east gate of the…

“Jake Teeny?” Keith Evans asked the suntanned man in the…

Brad Miller had not had a chance to carry on…

Unlike an incoming attorney general of the United States who…

When Keith Evans and Maggie Sparks followed the Webster’s Corner…

In junior high school, Brad had erased a file with…

Dana Cutler drove aimlessly to give the adrenaline in her…

Keith Evans stayed at the hospital with Maggie Sparks while…

Brad was pacing the fifth-floor corridor of the St. Francis Medical…

At the crime scene, as best he could remember, Brad…

A week after the West Coast shoot-outs at the hospital…

Part Seven
The Queen of Hearts

Brad got back to his apartment just before three after…

The events that followed Brad’s call to Keith Evans would…

Dana Cutler and Brad Miller were watching CNN’s coverage of…

By midnight there were no cars in the remote section…

Dana finished giving a detailed statement to the FBI at…

Brad Miller wrapped his arm around Ginny Striker’s shoulders, and…

Christopher Farrington sat by himself in his mansion in Portland’s…

Other Books by Phillip Margolin

Brad Miller woke up at 6
A.M.
even though his meeting with Roy Kineer, the retired Chief Justice of the United States Supreme Court, was scheduled for nine. He was too nervous to get back to sleep, so he went into the bathroom to get ready for the most important meeting of his life. Under normal circumstances Brad would have been anxious about being in the presence of an intellectual giant. Not so long ago, he had been reading Kineer’s landmark opinions in law school. But it wasn’t Kineer’s stature that made Brad’s hand shake as he shaved. What frightened him was the possibility that he was wrong, that he’d misinterpreted the evidence. And what if he was right?

Brad stared in the mirror at his half-shaved face. Nothing about his average looks or personal history was outstanding. He was twenty-six, with curly black hair, a straight nose, and clear blue eyes—not ugly but certainly not male model material. He was a fair athlete who was good enough to be the second best player on his college tennis team, but his athletic skills had never been championship caliber. Brad had done well enough in law school to make the
Law Review
, but he hadn’t won any other academic prizes, and he was employed as a junior associate in Oregon’s largest law firm, which meant that he occupied the lowest rung on a very high ladder. Until today, he had been a fairly insignificant member of the human race. If he was right, he was about to become a key figure in the biggest political scandal in American history.

The sound of running water woke Dana Cutler, who never slept easily. It took her a moment to remember that she was in the FBI safe house and another moment to decide that there was no threat. Brad Miller was in the room next to hers, and he was probably taking a shower. While her breathing eased, Dana lost herself in the shadows that were shifting across the pale white ceiling. When she was calm she got out of bed.

Dana had been sleeping in a T-shirt and panties and she looked sexy until she took off the T-shirt, revealing the scars on her breasts and stomach. Plastic surgery and time had turned most of them into pale, oddly shaped souvenirs of something really bad. While she washed and dressed, Dana turned her thoughts to the meeting she would attend later this morning. She prayed that it would usher in a return to normalcy. She was tired of the violence, tired of being hunted; she longed for calm and quiet days.

Brad finished in the bathroom and dressed in his best suit. Before going downstairs, he pulled the shade aside and looked out the window of the safe house, which was separated from the woods by a wide field. The leaves were changing from green to vivid reds and yellows. The sky was clear, and the colors looked even more intense in the strong sunlight. Below his window, an agent was patrolling the grounds. The guard exhaled and his breath turned white in the chill fall air.

Brad turned away from the window and headed down to the kitchen. He had no appetite, but he knew he had to eat. He would need all of his energy when he met with Justice Kineer, who had come out of retirement to head up the investigation that was occupying the front page of every newspaper in the country. United States presidents had been suspected of sexual infidelities, financial schemes, and criminal activity, but no president had ever been the subject of a murder investigation while serving in office.

Brad didn’t recognize the agent who was making coffee on the kitchen counter. He must have come on duty after Brad went to sleep.

“Want some?” the agent asked, pointing at the pot.

“Yeah, thanks. What is there to eat?”

Normally Brad was a pancake and omelet man, but he didn’t have much of an appetite this morning so he settled for a bowl of cold cereal and then carried a mug of coffee into the living room. He would have liked to get a breath of fresh air, but Keith Evans, the agent-in-charge, had instructed him and Dana Cutler to stay inside and away from the windows. Brad suddenly felt sick when it dawned on him that he’d made himself a perfect target for a sniper when he’d pulled aside the shade to look outside earlier.

Brad turned and saw Dana descending the stairs. She was wearing a business suit, and it threw him. He had never seen her dressed up before.

“I didn’t get much sleep either.”

“You should have something to eat before we go.”

Dana nodded and walked into the kitchen. Brad watched her. Even though they were on the same side, Dana made him nervous. He had grown up in a nice, middle-class family. Until the Clarence Little case entered his life, he had followed one of the approved middle-class routes through life—college, law school, employment in a good firm with plans for a family of his own and a house in the suburbs. There was no place in this design for acts of extreme violence, the exhumation of corpses, hanging out with serial killers, or trying to bring down the chief executive of the United States of America, things he’d been doing way too much of lately.

Brad heard the guard in the kitchen say good morning to Dana before walking toward the back of the house. Plates rattled on the kitchen table, Dana making something for breakfast. Brad knew for a fact that he wouldn’t be sitting in this house surrounded by armed guards if it weren’t for her. He would probably be in his broom closet–size office working on a memo for one of the partners concerning some minuscule aspect of a multimillion-dollar real estate closing. Of course, some would say that being bored to death was better than being dead for real.

Jem by Frederik Pohl
Yesterday's Gone: Season Six by Sean Platt, David Wright
Talon of the Silver Hawk by Raymond E. Feist
Friends at Homeland Security by Carl Douglass
Stella Mia by Rosanna Chiofalo
Believing by Wendy Corsi Staub
A Bend in the Road by Nicholas Sparks
No World Concerto by A. G. Porta
The Rockstar and His Fangirl (How Not to be Seduced by Rockstars): A Hot Billionaire Rock Star Romance by Tee, Marian
Beloved by Antoinette Stockenberg
Our partner