Exiles From The Sacred Land (Book 2) 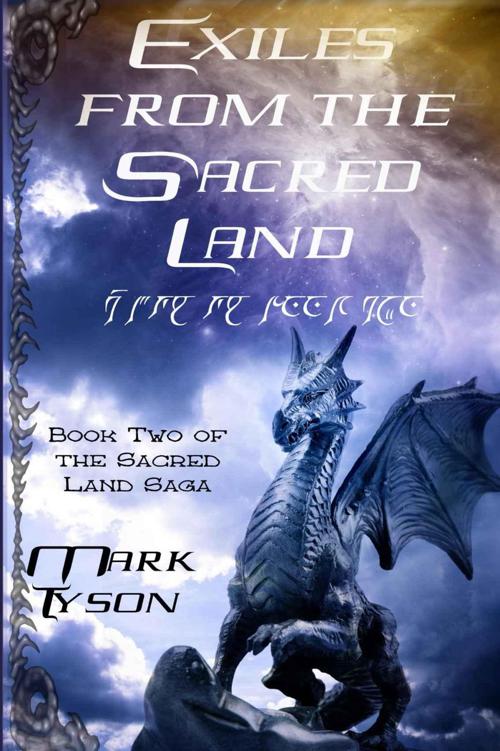 Chapter 3: Shadow of the Mountain

Chapter 13: Rugania: The Isle of Doom

Chapter 15: The Tome of Enlightenment

Chapter 17: One Idea Too Far

Chapter 18: Ruins of an Empire

Chapter 21: The Dead of Winter

Exiles from the Sacred Land

All Rights Are Reserved. No part of this book may be used or reproduced in any manner without written permission, except in the case of brief quotations embodied in critical articles and reviews. The unauthorized reproduction or distribution of this copyrighted work is illegal. No part of this book may be scanned, uploaded, or distributed via internet or by any other means, electronic or print, without the author/publisher’s permission.

This book is a work of fiction. The names, characters, places, and incidents are products of the writer’s imagination or have been used fictionally and are not to be construed as real. Any resemblance to persons living or dead, actual events, locale, or organizations is entirely coincidental.

Published in the United States by Shadesilver Publishing 2014

This book is dedicated to Michael, Eldon, and Brandie, who have all helped fix the potholes in the road.

I would like to acknowledge the many people who helped me write this book along the way
: Most importantly my editor, Courtney Umphress, and book cover artist, Joe Calkins. Also, Kylie, Steve, and Linda.

The light from the fire pit danced on the walls like little yellow and red sylphs delighting in the ominous workings of the wielder at the center of the room. Dirty, soot-stained green robes clung haphazardly to an emaciated frame of a man at task. Feverishly, he drew in as much essence from his surroundings as possible and concentrated his mental faculties on a single oblong object sitting on the wooden table before him. Scattered on the floor all around the table lay the remains of brightly-colored egg shells, dragon egg shells, to be exact. As he concentrated his power on the egg, the walls of the room buckled outward and the ceiling groaned from strain. Sweat began to pour from the wielder’s forehead as he concentrated, and just before it seemed the walls would crack open and the ceiling would burst out, he collapsed onto the dirty floor. In delirium, he dreamed about a silver statue of a great dragon with ruby eyes clawing at him. A small green statuette of an elf maiden glowed in his hands, and a young girl of about fifteen seasons with sapphire blue eyes laughed at him.

When he awoke, it was daytime. The only window in the room let in the sunlight. He gathered his strength and stood before the table, searching for the egg. Thankfully it was still intact on the table. All his previous attempts had failed, resulting in the destruction of the egg, but this time he had succeeded. He carefully removed the egg from the table and placed it on a specially-lined stone bowl near the fire pit. The wielder in green robes went about stoking the fire until it roared back into a steady flame. Somewhere in the back of his mind he heard the door open behind him but did not turn to see who entered the room.

The man started at the sound of a human voice. “What, who is it?”

“Ah yes, Naneden. Come here and gaze upon my work. I have done it. I have moved beyond the creation of Dramyds from dragonkind. I have used the power of the gods and created our greatest ally.”

Naneden looked over his master’s shoulder at the egg. “Master, what have you created inside this egg?”

“My dear apprentice, what I have created will strike fear in the hearts of men and elf-kind alike, for it will have the ability to blend among them undetected. I have taken an egg of the Drasmyd brood and the essence of the Duil brood and combined their magic into a single egg. When it hatches, this new Drasmyd Duil will not only be able to create Dramyd at a far more prolific rate, it will be able to use the magic of the Duil dragons to take the shape of whatever creature it desires.”

A wicked grin formed on Naneden’s thin lips. “You are talking about the creation of your army of Dramyds. You have done it, Master; you can now produce the great army of Toborne.”

“No, Master, I have never doubted you.”

“We will need a greater number of dragon eggs from the two broods. Can you manage it?”

“Stealing the eggs is dangerous, my master, but with the help of the Dramyds you have already created, I should be able to take what we need. Of course, the number of egg-producing dragons dwindles as we manipulate them.”

Toborne’s brow furled in concentration. “Yes, ideally we should capture a pair of each for our purposes.”

“Master, even if we could do such a thing, dragons of these two broods do not lay clutches of eggs often. Might we learn how to employ the life-birth broods? An army of Drasmyd Duil would surely destroy the Dramyd and the Duil populations.”

“We must also take into consideration that the live-birth dragon broods will naturally try to stop us from taking their young and from taking more of their relatives’ dragon eggs.”

“They will try. Of course, they will send their precious dragon knights out before they will come for us themselves. It is their folly that they put so much faith into their knights. It will buy us time to amass an army large enough to defeat even them.”

Naneden thought for a long moment. “Master, if we could somehow control the population of egg-laying broods, we could hatch them to fight against those who would seek to stop us. The drakes could be a powerful ally.”

“Naneden, you are wise beyond your many seasons. I was right to apprentice you.” Toborne gazed lovingly at his egg by the fire. “There is a way to take control over them. I have tried to do it before, but I failed.”

“It requires taking control over the Silver Drake. With the power the gods have bestowed in her, we could insure our victory in the war to come. It will not be easy. The Silver Drake is a force to be reckoned with, and she is heavily guarded.”

Naneden’s eyes twinkled with delight. “Master, if you will permit me, I will find a way.”

Naneden opened the silver-runed tome before him and began to recite the ancient words written within. Madness flashed in his eyes as his face contorted in maniacal glee. A dark, silky smoke rose all around him. His body pulled and stretched as he laughed at the pain the incantation caused him. His study melted around him, replaced with a vast field of yellowed prairie grass covered with dark-clad soldiers. Naneden appeared at once from the darkness, hunched over; usually the incantation rendered its caster unconscious, but not Naneden. He quickly righted himself to inspect, by the light of the full moon, the army crawling over the field. He gasped for breath and addressed the nearest soldier. “You.” He pointed a thin finger at the startled soldier. “Where is your commander?”

“There.” The soldier pointed to a small bluff formed by two overturned boulders.

Naneden made his way to the bluff, his cloak blowing eerily in the low wind. His eyes narrowed at the sting of cold air as he scowled at the commander on the boulder. He approached the ethereal being, who was hovering above the battlefield.

“Rodraq,” Naneden snarled, “what are you waiting for? Attack! Attack Soldier’s Bluff there in the distance.”

Rodraq turned and rushed toward Naneden, knocking him flat on his back. He put his face as close to Naneden’s as possible and spoke in a raspy, low voice. “Do not disturb me, madman. I no longer take orders from you. Why should I not kill you?”

Naneden smirked, unfazed by the Spectre’s threat. “Because it was I who saved you.”

“Saved me?” Rodraq sputtered. “You think you have saved me? I should kill you.”

“Aye, we have already covered that, have we not? Your threat grows tiresome.”

Rodraq focused harshly on Naneden’s ashen face. “You no longer have any use here.” He raised his sword hand to strike a blow.

Naneden laughed until he coughed. “What are you talking about?” he inquired after his coughing fit ended. “I still possess the tome, and it was I who eliminated the army of the West by removing them from your path. You most certainly do take orders from me. Who else would you take them from?”

Rodraq backed off Naneden and turned his ghostly-white face back to the village. “I will not destroy any village that does not offer resistance. We will travel around.”

Naneden became enraged. “What? I ordered you to destroy all the villages in your path to Lux Enor whether they offered resistance or not. If you leave men behind, they will organize a new army and reclaim Symboria
and
the Sacred Land.”

Here Be Monsters (Tyler Cunningham) by Sheffield, Jamie
A History of the African-American People (Proposed) by Strom Thurmond by Percival Everett, James Kincaid
Lyon on a Leash by Knowles, Erosa
Anvil of Stars by Greg Bear
The Engagement by Hooper, Chloe
Ship of Fools by Fintan O'Toole
Luck on the Line by Zoraida Córdova
Doctor Who by Kate Orman
Goth Girl Rising by Barry Lyga
Conjuro de dragones by Jean Rabe
Our partner