Read Eye of the Storm Online 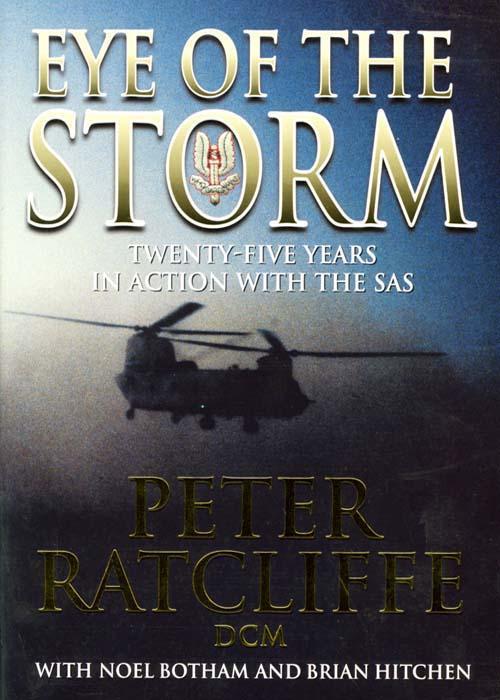 Brought to you by KeVkRaY

Peter Ratcliffe
was born into a working-class family in Salford in 1951, and left home for good when he was sixteen. Disenchanted with the life of an apprentice plasterer in Preston, he joined the 1st Battalion, the Parachute Regiment in 1970, having passed out as top recruit of his intake. He served with 1 Para in Northern Ireland, and in 1972 applied for SAS Selection, which he passed at the first attempt. He served with the Regiment for twenty-five years, on operations in Oman, Northern Ireland, the Falklands, and the Middle East, as well as mainland Britain; he was Mentioned in Despatches for his command of an SAS undercover patrol in the Falklands in 1982, and awarded the Distinguished Conduct Medal for his leadership of an SAS mobile patrol behind enemy lines in Iraq during the Gulf War of 1991. Commissioned in 1992, he left the army in 1997 as a major.
Eye of the Storm
, his account of his SAS career, was first published in 2000 to wide notice and considerable acclaim.

A celebrated war correspondent during the 1960s,
Noel Botham
has had a long and distinguished career as an investigative reporter, European editor of the
National Enquirer
, and author; his fourteen books include his biography of Princess Margaret,
Margaret: The Untold Story
, which was an international bestseller.

Formerly a foreign correspondent,
Brian Hitchen
’s career as a journalist covered every major theatre of conflict from Cyprus to Vietnam. He was Editor-in-Chief of the
Sunday Express
for a number of years, retiring in 1996; he was appointed a
CBE
in 1990 for services to journalism. 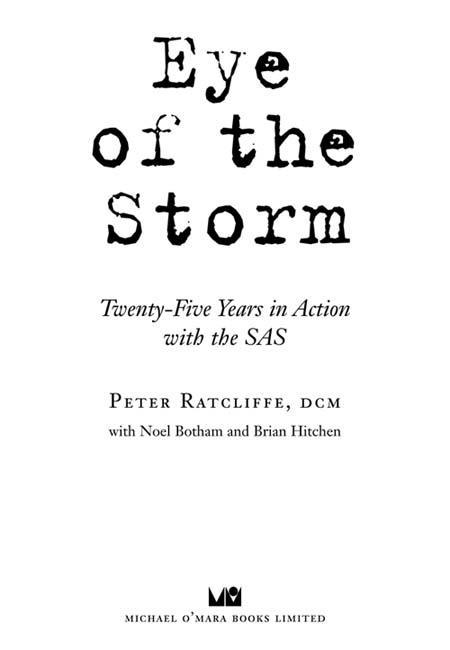 First published in Great Britain in 2000 by

This electronic edition published in 2012

All rights reserved. You may not copy, store, distribute, transmit, reproduce or otherwise make available this publication (or any part of it) in any form, or by any means (electronic, digital, optical, mechanical, photocopying, recording or otherwise), without the prior written permission of the publisher. Any person who does any unauthorized act in relation to this publication may be liable to criminal prosecution and civil claims for damages.

The right of Peter Ratcliffe to be identified as the author of this work has been asserted by him in accordance with the Copyright, Designs and Patents Act 1988.

Every reasonable effort has been made to acknowledge all copyright holders. Any errors or omissions that may have occurred are inadvertent, and anyone with any copyright queries is invited to write to the publishers, so that a full acknowledgement may be included in subsequent editions of this work.

Designed and typeset by Martin Bristow

To Susanna,
and
to Kirsty and Katie

The author and fellow candidates after passing SAS Selection

On Operation Storm: the mortar pit on Diana One, Dhofar, 1973

The author and Taff cleaning their SLRs on Diana One

Deploying to a new location by helicopter, Dhofar, 1975

A mortar pit at the Simba position, Dhofar, 1975

Green Five, the sangar at Simba shared by the author

The author’s Mention in Despatches, awarded for leading a patrol on West Falkland

The Chinook bringing the author into Iraq to take over Alpha One Zero, 29 February 1991

SAS 110s camouflaged in an LUP in Iraq

Sketch map of Victor Two before Alpha One Zero’s attack

The Sergeants’ Mess meeting convened by the author in Iraq, 16 February 1991

Mess Meeting at Wadi Tubal, Western Iraq
by David Rowlands (
reproduced by permission of the artist
)

The RQMS and Major Bill during the resupply behind enemy lines, February 1991

The author with the Prince of Wales at Stirling Lines after the Gulf War, April 1991

I am grateful to a number of people for their help and encouragement in the preparation of this book, among them:

My good friends Mike McMahon, Hugh Leman and Duncan Bullivant, for their loyalty, friendship and support over the years.

Brian Hitchen and Noel Botham, for all their research and endeavour in the writing of this book.

Michael O’Mara, my publisher, for giving me the opportunity to tell my story, and also my editor, Toby Buchan, for his professionalism and attention to detail during the editing of the book.

A special word of thanks to Laurie Milner of the Imperial War Museum.

David Rowlands for permission to reproduce his painting of the Sergeants’ Mess meeting in the Wadi Tubal, Western Iraq, which I commissioned from him after the Gulf campaign, and which later hung in the Sergeants’ Mess at Stirling Lines, Hereford. David was the only professional artist who was in the theatre of war in the Gulf at the invitation of the British Army, and was attached to the crew of a Warrior infantry fighting vehicle of 4 Armoured Brigade.

In particular, to my good friend JAK – the cartoonist Raymond Jackson – who sadly died in 1997 and so didn’t have the chance to read the book. I am grateful, too, to his wife, Claudie, for permission to reproduce JAK’s version of the Sergeants’ Mess meeting in Iraq, and to their son Patrick for his photograph of me on the jacket. My thanks, too, to Doug London for supplying the negative of JAK’s cartoon.

To my godson, George, and his brother Charles, for all the enjoyment we have playing football together.

Lastly, to all those other ex-members of the Regiment who are my friends, but whom I cannot name.

We are the Pilgrims, master; we shall go

Always a little further: it may be

Beyond that last blue mountain barred with snow,

Beyond that angry or that glimmering sea.

from
The Golden Journey to Samarkand
by James Elroy Flecker

(These lines are engraved on the memorial clock tower at the headquarters of 22 Special Air Service Regiment in Hereford. Also engraved on the tower are the names of all members of the Regiment killed in training or in action.)

Alpha's Captive 04 - Haven by V M Black
Miranda by Sheila Sheeran
Also Known As by Robin Benway
Rome Burning by Sophia McDougall
Wake In Fright by Kenneth Cook
Underneath It All by Scheri Cunningham
Promethea by M.M. Abougabal
An Ideal Husband? by Michelle Styles
Wheels of Steel Book 4 by Pace, Pepper
A Most Scandalous Proposal by Macnamara, Ashlyn
Our partner