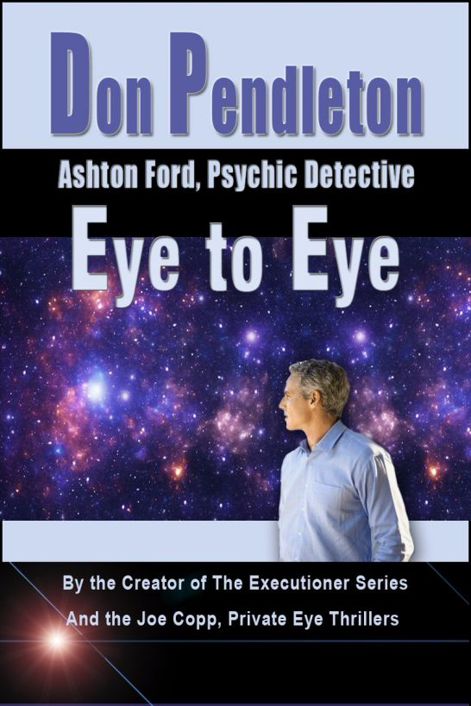 Published at Smashwords by
Linda Pendleton.

This is a work of fiction. Any similarity to
actual persons, groups, organizations, or events is not intended
and is entirely coincidental.

This edition is licensed
for your personal enjoyment only. This ebook may not be re-sold or
given away to other people. If you would like to share this book
with another person, please purchase an additional copy for each
person. If you are reading this book and did not purchase it, or it
was not purchased for your use only, then please return to
Smashwords.com and purchase your own copy. Thank you for respecting
the hard work and rights of the author.

Copp in the Dark

Executioner: War Against
the Mafia, Comic

A Search for Meaning

To Dance With Angels

Whispers From the Soul

Metaphysics of the Novel

For Ernest Holmes...wherever. I hope he
would have liked this book. I hope he still would.

There are more things in
heaven and earth, Horatio, Than are dreamt of in your
philosophy.

Ashton Ford will come as
something of a surprise to those of you who have been with me over
the years. This is not the same type of fiction that established my
success as a novelist; Ford is not a gutbuster and he is not trying
to save the world from anything but its own confusion. There are no
grenade launchers or rockets to solve his problems and he is more
of a lover than a fighter.

Some have wondered why I
was silent for so many years; some will now also wonder why I have
returned in such altered form. The truth is that I had said all I
had to say about that other aspect of life. I have grown, I hope,
both as a person and as a writer, and I needed another vehicle to
carry the creative quest. Ashton Ford is that vehicle. Through this
character I attempt to understand more fully and to give better
meaning to my perceptions of what is going on here on Planet Earth,
and the greatest mystery of all the mysteries: the
why
of existence
itself.

Through Ford I use
everything I can reach in the total knowledge of mankind to
elaborate this mystery and to arm my characters for the quest. I
try to entertain myself with their adventures, hoping that what
entertains me may also entertain others—so these books, like life
itself, are not all grim purpose and trembling truths. They are fun
to write; for some they will be fun to read. To each of those I
dedicate the work.

Chapter One: A Certain Perception

There is something about the stilled
presence of a dead human body that is downright unsettling,
especially if the corpse has ripened a bit and begun to decompose,
because the first thing to then hit you is the odor—and it is an
odor unlike anything else you may ever encounter. Once you get past
the odor, a sensitive person might next be struck by the apparent
incongruity of the scene—a disresonance, if you will, as though
everything is out of whack here, inharmonious, something hideously
wrong or evil—especially if the corpse is that of a once beautiful
woman—and this perception may then well lead you into a morbid
apperception that death is an unlovely and unnatural state of
being.

I was experiencing all of
that and more that cool December morning in Griffith Park beside
the bloated corpse of Mary Ann Cunningham, a twenty-year-old coed
from Pasadena, by all accounts a sweet kid with a very hopeful
future in astrophysics until Death overtook her in the observatory
parking lot. She had apparently been raped, strangled, and
unceremoniously tossed over the wall to slide down the steep
hillside like so much litter, discarded when no longer needed, like
an empty beer bottle or a sack of trash.

Incongruous, yes, appallingly so, and
monstrous when apperception leads the mind to a realization that
this beautiful, fragile package of life was callously sacrificed
for a fleeting pleasure.

That was my initial reaction, anyway, and it
was a rational one. We'd had a lot of these cases in Los Angeles in
recent years—the so-called serial killers, sexual psychopaths,
etc., who roam our streets like lobos and kill for entertainment.
Mary Ann seemed the typical victim—stripped, abused, murdered,
carelessly discarded. She had been missing for five days, last seen
at the Griffith Park Observatory, where she worked part-time, at
about noon on the preceding Monday. It had been a wet and windy
day, with the observatory peak cloaked in misty clouds and
occasional light rain. Mary Ann had a two o'clock class in
Pasadena; she customarily left the observatory at noon on Mondays
and picked up a fast-food lunch on her way to Cal Tech. Two
co-workers at Griffith witnessed her exit into the parking lot
bundled in plastic rain gear. She never got to the class at Cal
Tech and did not return home that night. Worried parents began
calling hospitals at about midnight and filed a formal police
report the next morning but no police action was taken until the
following Thursday when Mary Ann's car was found parked at a
MacDonald's in Eagle Rock just outside Pasadena.

How did
I
get into it? Sheer accident, or so
it seemed at the time. Greg Souza had called me at the ungodly hour
of seven o'clock that Saturday morning and asked me to meet him at
the observatory. I'd had no contact with the guy for nearly a year.
We did some time together in the navy. Intelligence work. He is
now a private eye, doing business in Los Angeles, and he would
bring me in occasionally as a consultant. We were never exactly
friends. In fact, our personalities really clash. So we sort of
avoid each other, while at the same time respecting each other. And
he would call me from time to time. I had managed to help him with
a couple of baffling cases. I am a psychic. Or something. I don't
read minds or prophesy, none of that stuff, but I do get certain
insights now and then which cannot be accounted for in ordinary
terms. So I am a sort of a psychic. I am also a graduate spy, and
so I have learned a little about solving puzzles and developing
information.

Greg Souza called me that Saturday morning
and told me that he needed my help with a "terrifically important"
case on which he had been working for several weeks. He had hit a
dead end and was hoping that my "mental gifts" could start him
along a fresh track. That is about all he told me on the telephone
but I was accustomed to his tight lip and mysterious ways so I did
not press for details at the moment; I just looked at the bedside
clock and groaned and agreed to meet him at nine o'clock at
Griffith Park.

I don't know how you feel about astronomical
observatories, but I have to say that the atmosphere in these
places always gives me a rush—almost a religious feeling. When you
think about it, a look into deep space is really a trip to the
past. These things taking shape way out there at the edge of the
observable universe are really just ghostly echoes of events that
took place long before the human race appeared on this planet. When
the astronomer informs you that the object you are viewing is
400,000,000 light-years away, what he is really saying is that the
object is so distant that it takes 400,000,000 years for the light
from that object to reach the lens of the telescope—so what you are
looking at through the lens could have winked out some 390,000,000
years ago, but we won't know that for another ten million years,
when some lucky guy gets to "witness" the death of a galaxy which
really has not existed during the life of man on earth.

I get a rush, yeah, just
to be reminded of time in such big gobs and to realize that the
primordial universe of some ten to twenty billion years ago can
still be detected by my senses and dissected by our sciences as
though the whole magnificent procession is passing right by our
windows right now. Gives me a shiver, and maybe that was what set
me up for Mary Ann.

This observatory is mainly
a teaching facility now, except for the daily planetarium shows
which are open to the public. It was nowhere near showtime and
apparently there was not a lot of teaching scheduled for Saturday
mornings; the place was just about deserted except for the
caretakers and a few staff members. Souza was waiting for me at the
check-in desk, conversing casually with a very pretty woman in
designer jeans, spike-heeled boots and a lumberjack shirt, who he
introduced as Jennifer Harrel and, almost in the same breath,
referred to as
Dr
. Harrel—but I did not get from the introduction any
amplification of the lady's identity.

She came across a bit cool
but I gave her a ten on my scale anyway. With the spike heels, she
was about my height. I would have called her age in the midtwenties
but allowed another few years to account for that
Dr.
before her name plus
a mature poise and manner. Can't say that I really liked the lady,
right off. I sensed an element of condescension in her manner
bordering on rudeness. Souza had introduced me as "my colleague"
but she fixed her gaze on a spot several inches above my eyes and
asked me, "What do you do, Mr. Ford?"

I muttered, "Whatever comes up," and added,
with a nasty glance at Souza, "Even at seven o'clock on a Saturday
morning. What's the problem here, Greg?"

He took the two of us in
hand and led us several steps away from the empty desk before
telling me in quietened tones why he'd awakened me at 7
a.m
. It's one of the
things that always bugged me about the guy. He has a basically
conspiratorial mind and a flair for the dramatic, one of those guys
who could make a routine weather report sound like a vital national
secret: Are you cleared for this?—listen, I have it on the very
best authority—I mean from an unimpeachable source—I am absolutely
positive that it will be fair and warmer today.

So he pulls Jennifer Harrel and me into a
tight clutch in an empty room and, in a voice probably worried
about hidden microphones and/or concealed cameras, tells me, "The
least I say about this for the moment, the better. I don't want to
say anything to throw you off. Jennifer, listen to me. This guy is
fantastic. I mean, this guy is beyond belief. The things I've seen
him do..." Which was a damned lie. He hadn't seen me do a hell of a
lot. "I know how you feel about this sort of thing, but what the
hell..." Fine, great, he'd set me up with a hostile client. "We're
at the point where we just have to say, okay, that's it, kapootie,
or we have to dare to try something that some people might think of
as kookie; okay, that's where we're at."

Greg Souza is five-foot
seven and weighs 210 pounds. He looks like Al Pacino, overweight.
But he's hard all over and a tough son of a bitch, let me tell you.
Otherwise I would have hauled off and decked him, right
there.

Instead, I said, mildly, "Greg, don't sell
me. You've hauled my ass out of bed, now tell me why." Before he
could get a word in, I said to the lady, "Don't expect Mandrake the
Magician and maybe you won't be too disappointed. Let's give it a
shot. What's the problem?"