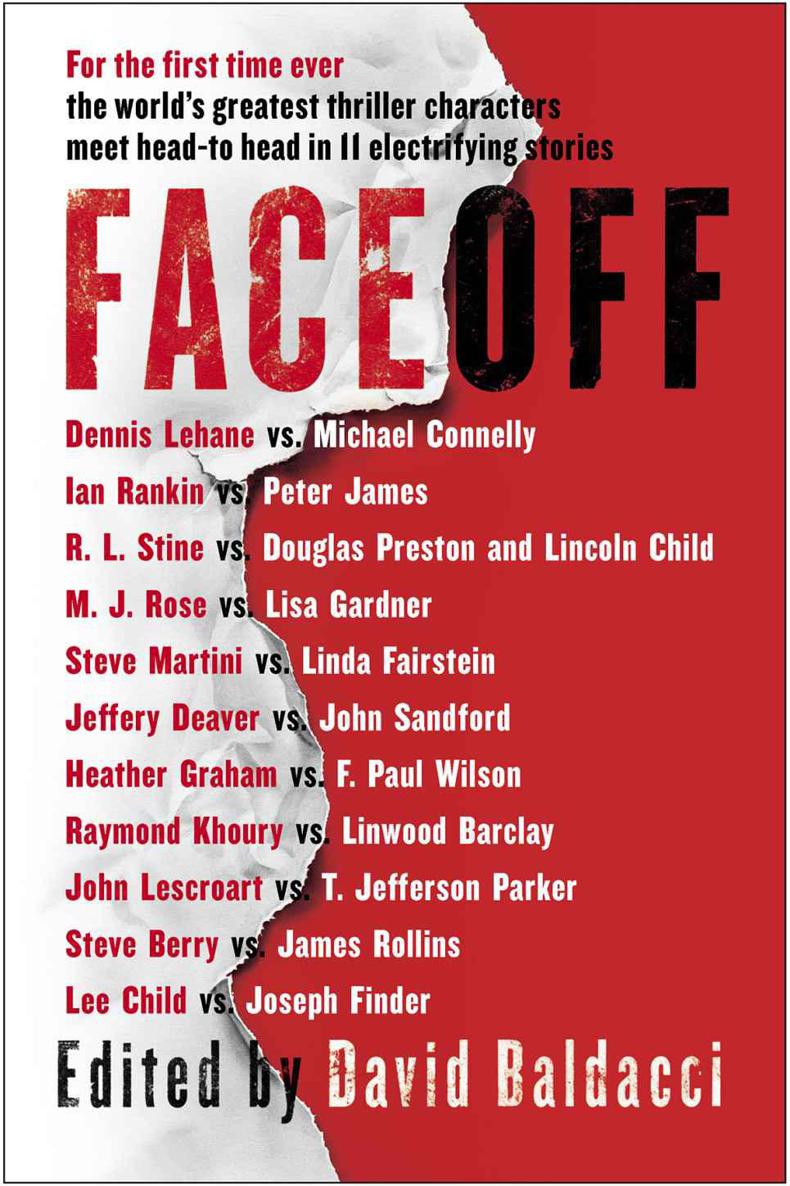 IN THE NICK OF TIME

For Gayle Lynds and David Morrell

In 2004 two accomplished thriller writers harbored a dream. Their names: Gayle Lynds and David Morrell. To that point both Gayle and David had enjoyed long and successful careers. But something was missing. The ‘who-done-its’ had Mystery Writers of America. Those who specialize in fear, the Horror Writers Association. And the Romance Writers Association had long numbered thousands of members.

Every genre seemed to have a trade group.

So Gayle and David decided to start one.

It began in Toronto on October 9, 2004, and from that small beginning sprang International Thriller Writers. Today over 2,500 men and women, from forty-nine countries around the world, hold membership. Eighty percent are working thriller writers. The rest are industry specialists, agents, editors, and fans. Every July the genre gathers in New York City for Thrillerfest. It’s quite literally
summer camp for thriller writers and thriller enthusiasts. The Thriller, awarded every year in a variety of categories, is now
the
prize thriller writers covet, since it was both created and bestowed by their peers.

From its beginning ITW strived to innovate. Doing what everyone else had done was never in its business plan. So, in 2007, when board member (and superb British thriller writer) David Hewson suggested that the organization not charge dues the idea was immediately embraced. If a writer is published by an ITW-recognized house (of which there are hundreds), then membership is free.

So how would the organization sustain itself? Pay its bills?

The answer came in another innovative way.

The organization would create its own books that would be sold to publishing houses, the revenue from which would generate operating capital.

But an idea right up ITW’s alley.

ITW’s first publication,
Thriller
(2006), was the first anthology of thriller short stories ever compiled (remember that precept about never doing what others had done). Thirty-three ITW members donated stories. James Patterson (an ITW member) agreed to serve as editor, and the result became one of the most popular anthologies of all time—selling over 500,000 copies worldwide. The revenue from that groundbreaking book not only provided ITW with initial operating money, it also endowed the organization.
Thriller 2
(2009) and
Love Is Murder
(2012) followed. Keeping with this innovative theme ITW published the first audio book ever written only for the ear:
The Chopin Manuscript,
which became a resounding success. Edited by the incomparable Jeffery Deaver (an ITW member),
Chopin
was named the 2008 Audio Book of the Year. That was followed by another audio success,
The Copper
Bracelet.
A move into the world of nonfiction came with
Thrillers: 100 Must-Reads,
edited by David Morrell and Hank Wagner, which continues to garner widespread critical acclaim. Another ITW board member, the legendary R. L. Stine (creator of
Goosebumps
), led the organization into the world of young adult fiction with
Fear.
Annually, ITW shepherds a class of writers through their challenging inaugural year in what is known as the Debut Author Program.
First Thrills,
edited by ITW founding member Lee Child, became an anthology of stories from the 2011 class.

What an impressive résumé.

All created by author-editors who volunteer their time and writers who donate their stories. Nearly every single penny earned from ITW’s publications has gone to the organization.

And that will be the case with this book.

I joined ITW early on. I agreed with Gayle and David. It was time for an organization of thriller writers. I’ve been waiting for a project where I could become more involved with the group, so when I was approached about editing
FaceOff
I immediately said yes.

The entire concept intrigued me.

Take iconic writers with iconic characters and face them off against each other. Normally, this could never happen. Each writer is under contract to his or her own respective publishing house. Teaming with another writer, from another house, and combining characters would contractually be impossible. Which house would publish the story? No way to make that call. And no way either house would allow the story to be published by a third company. Only with ITW’s model—that the stories are donated and the money goes to the organization—would this work.

So this volume is truly a once-in-a-lifetime event.

All of the contributors are ITW members. All eagerly agreed
to participate. When I was told that ITW founding member Steve Berry, who worked with James Patterson on
Thriller,
would offer assistance as managing editor, I was thrilled. He’s the glue that held this project together. Thanks, Steve, for all you did.

And thanks to all of the contributors.

Where else will you be able to see Jeffery Deaver’s Lincoln Rhyme meet John Sandford’s Lucas Davenport? Or Patrick Kenzie entering the world of Harry Bosch? Fans of Steve Berry’s Cotton Malone and James Rollins’s Gray Pierce have clamored for years to see those characters together. Then there’s Lee Child’s Jack Reacher meeting up with Joseph Finder’s Nick Heller in a bar in Boston—and doing what Reacher does best. Plus Steve Martini’s Paul Madriani becoming entangled with Linda Fairstein’s Alex Cooper. And the ever-odd Aloysius Pendergast coming face-to-face with the scary world of R. L. Stine.

These are just a few examples of what lies in the pages ahead. All of the stories come with an introduction that describes the writers, their characters, and a bit about the story’s gestation. At the end of the book are contributor biographies—a way to learn more about each of these amazing talents.

You’re in for a real treat.

So let the face-offs begin.

O
n paper it seemed like a cool idea. Bring Patrick Kenzie and Harry Bosch together in a short story for a good cause. But Dennis Lehane and Michael Connelly quickly realized that it was easier said than done. Both characters are rooted in the verisimilitude of the places they live and the jobs they carry out. They’re fictional, sure, but their creators had worked hard to ensure that neither ever made a false move. In
short, Harry Bosch and Patrick Kenzie live or die with readers on the basis of their believability. No gimmick short story—good cause or not—could be allowed to mess with that.

So how would these two iconic characters come together?

Most important, who would come to whom?

Would Bosch go east to Kenzie’s Boston, or would Boston come to LA?

It seemed from the start the natural thing would be to send Bosch east. In the most recent Bosch books Harry works for the LAPD’s Open-Unsolved Unit, a cold case squad that, by its nature, involves travel. When people think they’ve gotten away with murder, part of that getaway is moving away. Since many of Bosch’s investigations have led him out of town, it was decided. Bosch would go to Boston and, while on a case, would cross paths with Kenzie.

Michael started the story in Los Angeles, formulating a crime and a case that Bosch would work several years after it occurred. He would trace a suspect to Boston, travel there to observe, and surreptitiously gather a DNA sample from a discarded coffee cup or a tossed cigarette butt. Once there, he’d cross the radar of Patrick Kenzie, who was working his own investigation, only for different reasons.

Michael wrote the first six pages of the story and a few more containing potential angles of exploration. He e-mailed the package to Dennis, suggesting he add another six pages or so and finish the story. Quick and easy. They’d be done, then back to work on their own stuff in a few days.

Michael waited for a reply.

Then, he waited some more.

A few days turned into a few weeks.

He finally dummied up an e-mail saying he’d had Internet issues
and just wanted to see if his start of the story had been received. When Dennis responded it was with a finished tale, adding twenty more pages, evolving the plot from the shorthand to the complex and humorous.

So here it is, the first face-off.

AS A PRACTICE, HARRY BOSCH
did his best to Stay out of Tunnels but as he came out of Logan Airport, a tunnel was unavoidable—either the Ted Williams or the Sumner, take your pick. The rental car’s GPS chose the Williams, so Harry drove down and deep under Boston Harbor. The traffic backed up at the bottom and then completely stopped as Bosch realized that the timing of his red-eye flight from LA had landed him in the heart of morning rush hour.