Read Falling Into You (Geek to Chic) Online

Falling Into You (Geek to Chic) 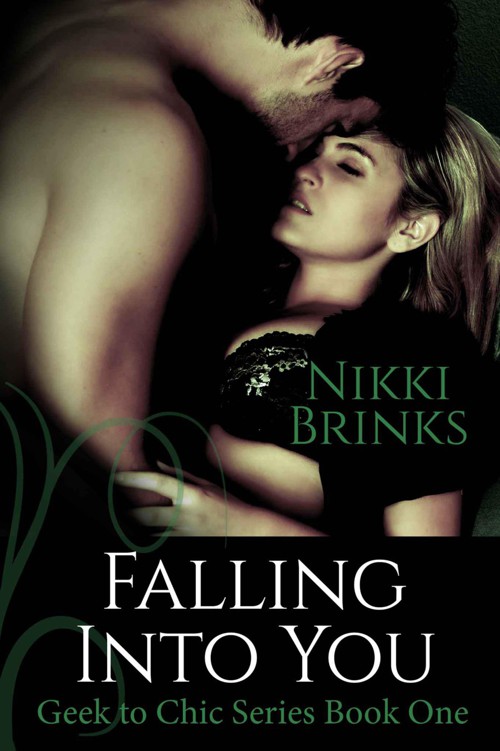 
To the
love of my life,

You have
always supported my dreams

No
matter how crazy!

Fuck, fuck, fuckity, fuck,
was the only
word that came to Roni's mind as she met the bitter early March air. The word
ping bonged around in her head like the hook from a one hit wonder song.

Shifting the small cardboard box in her arms
to get a better grip, she started to descend the five steps of the sleek black
glass building for the last time.
Fuck
her brain shouted again.

Six years she
had been working for that company.

One
small lapse in self-control and poof here she was with her box of office crap
and a security guard behind her making sure she ‘left peacefully’.
Ugh
.

Just as her foot hit the third stair, the box in her arms shifted and
her heel caught.

“Double Fuck",
this time the words spilled out of her mouth.

Roni pitched forward, her stuff flying out of the box, her body landing
against a rock dressed in a suit.

The
rock, however, was no match for her clumsiness as she took him down to the
ground with her.

Roni and the rock landed gracelessly on the
small patch of grass covered in snow adjacent to the stairs. Landing flat on
his back, with her falling smack on top of him. She felt the air on her cheek
as it rushed out of him.

Planting her
hands on his chest, she looked up at him ready to apologize and ask if he
needed an EMT.

Lying underneath her
body, was a man she had pictured in this position many times, although the
circumstances were entirely different.

A
man that inhabited more than a few of her dreams, none of said dreams would
receive a PG rating that was for sure.

She blinked a few times, in hopes the vision under she would morph into
someone else. No such luck, she had just plowed over Starbucks Boy.

A man she had silently admired every morning
for close to six months while standing in line at the Starbucks down the
street.

Every morning, at 7:00 exactly,
as she ordered her earl gray tea, he would stroll in, unknowingly sending her
blood pressure skyrocketing, in his expensive suit, 6’ 4” muscular frame, dark
curly hair cut business short, and piercing blue eyes.

Completely oblivious to the world around him
as he concentrated on his phone. She would wait for her earl gray and watch him
intently while he ordered his venti quad vanilla latte.

That's right, she was the kind of stalker who
knew the drink order of her obsession. Now, the object of her morning obsession
was lying beneath her not breathing all that well.

Finally coming
out of shocked stupor, she looked into his eyes, seeing both amusement and
anger.

She leaned forward,
grabbing his head almost violently checking for blood or bumps.

Never once noticing that her change in her
position, in her desperate attempt to verify he was fine (and touch him while
she could), had pushed her breasts right into his face. She moved on to check
his chest and arms, and wow, what chest it is, sliding down his body.

That’s when he grabbed her hips and she
realized that she was no longer lying on him. No, now she was straddling
him.

Her skirt riding all the way up to
her hips.
Way to make an impression Roni
,
her mind chastised her.

"I'm
fine, but you really need to get off of me... now" Anger punctuated the
last word of his sentence. The small shred of amusement she had seen in his
eyes a moment earlier was gone. Replaced by what she guessed was anger. After
all, she had just tackled and molested him all in the span of 2 minutes.
"As you can see we are drawing a crowd, and sorry to be blunt, but we look
like we are doing exactly the word that seems to fall so freely from your
lips".

Crap
! Had she been running her mouth instead of having an internal
dialogue this entire time? Well, wasn't that just the cherry on top of her day!

She glanced
around to see that yes in fact, they did have an audience.

"Sorry I was just checking to see if you
were ok!" She stated half apologizing half sad she would have to leave the
warmth of his body.

She made a move to
stand, which made her wriggle her ass on the sensitive part of him she was
currently sitting on.

Then suddenly he
had both of them on their feet, his hands still on her hips.

Interesting considering how a minute ago, he
seemed to want nothing to do with her.

The crowd
moved on, all but one man that is. He stood on the very stair that took her out
moments ago, laughing so hard, Roni was certain she was about to see a wet spot
appear on his pants.

"Alex go set
up for the meeting." Starbucks Boy said to his colleague without taking
his eyes off of Roni. "I’ll be along as soon as I am sure the lady here is
not suffering from sudden onset Tourette’s or a stroke given her fall and her
language."

He smiled, great now he
was laughing at her. Ugh!

"Yeah,
whatever, don't be long this deal needs to happen today." The other rock
in a suite, aka Alex, blurted between laughs.

Alex took off up the stairs and into the office building.

"Thank
you, I am fine, go to your meeting, I am sorry I knocked you over." Roni
said, waving a dismissive hand as she pulled free of his grip and began
gathering her items.

"Just got
canned, huh?" Starbucks Boy stated as he bent to help her retrieve her
items.

She rolled her eyes, and without
comment kept putting her pictures, pen holder, and other crap she had
accumulated in the 6 years she worked for the land development firm in her
box.

"Well, I guess it was nice
meeting you, um, see you tomorrow at Starbucks." He winked, handed her the
box of oatmeal she had kept in her desk, and then he walked up the steps. She
watched his butt for a moment as he walked away, with great appreciation for
his backside. Suddenly she realized he had mentioned Starbucks... did that mean
he had noticed her or had she blurted that out as well? She may never visit
Starbucks again out of shear embarrassment or maybe she would camp out
there.

Derek casually
turned to watch her leave, she was shaking her head and muttering something
about never drinking Starbucks again.

God,
he hoped that she didn’t stick to that resolution. He looked forward to seeing
her every morning at Starbucks.

In the 5
months, 3 weeks and 2 days, since he had first seen her, Derek had not once
found the courage to even say hi, let alone anything close to what he wanted to
say to her.

Instead, he walked into the
coffee shop every morning, looked to see if she was there, and quickly looked
down at his phone pretending to work.

When she grabbed her grande earl gray tea, yep, he knew her drink, he would
steal a glance of her curvaceous body. Trying to find a way to say anything to
her. Today had been his perfect opportunity. Hell, he had her straddling him
with her boobs in his face and he still had not said a word.

Though who could blame him when her hips
started moving against his, his mind simply turned off.

It took everything he had to force himself to
stand up removing her soft body from his muscular one. Luckily, his suit jacket
covered the effect she had on him.

31
years old, CEO of his own tech company, rich and good looking, yet he felt as
though he was still the short, thin, dorky 16 year old kid who never had a
date.

Sighing slightly, he watched as
she stumbled and righted herself before finally making her way to her car.

Maybe tomorrow would be the day he spoke to
her, or maybe the day after.

He didn't
want to come on too strong after all.

Walking as
though he was the most confident man in all the world, he took on his fake
persona of asshole CEO. Straightening his tie in the mirrored doors of the
elevator.

Derek took one last deep
breath to clear his head and calm his body from Starbucks Girl. Stepping into
the overly exuberant conference room of Conner & Walker Inc. he put on his
game face.

Ready to make the deal and
move on.

The
server farm and neighboring research facility they were looking to build needed
to be out in the middle of nowhere but connected to everywhere at the same time.

Hence his meeting with the two men who he
hated more than the dentist.

"So what
happened with clumsy Barbie?" Alex asked raising an eyebrow.

He was leaning back in the leather chair,
feet up on the expensive oak table, with his hands casually locked behind his
head.

Alex had been Derek's best friend
since pre-k and was now his business partner.

He was the cool kid who lets Derek tag along all those years.

Dragging him to every party, every sporting
event, and every social event he could find to get Derek away from his
computer. Derek hated it at the time, but appreciated everything Alex had done
for him.

Now they ran an empire
together, specializing in security technology. "She kind of looked like
that girl you have been drooling over at Starbucks" Derek's face tightened
in embarrassment at Alex's observation. Alex immediately bolted to an upright
sitting position, slamming his hand on the table in pure amusement. "Oh,
you have to be shitting me? That
was
Starbucks Girl? Tell me that while she was dry humping you in front of an
audience that you managed to ask her out finally?

Or how about getting her name?" Derek
looked at his longtime friend and for the first time since high school he
wanted to punch him.

"You're an idiot." Before Derek could defend himself in walked
asshole one and asshole too, better known as Michael Conner and Chad
Walker.

"Hey
douche bags, are you ready to get spanked in this deal?" Michael boomed as
he swaggered into the room.

With his hands
folded on the table now, hard business face in place, Alex responded with a
snort. "Bend over and grab your ankles boys because you are about to get
fucked" Let the games begin.