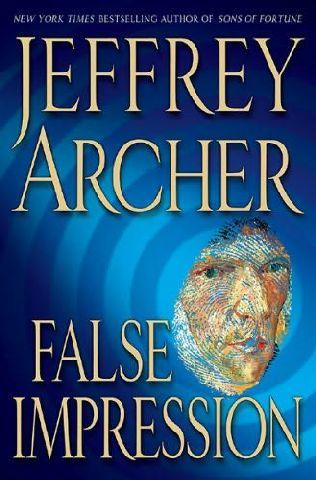 Shall We Tell
the President?

A Matter of
Honour

As the Crow
Flies

A Quiver Full of
Arrows

A Twist in the
Tale

To Cut a Long
Story Short

Mallory: Walking
off the Map

Basingstoke and
Oxford Associated companies throughout the world www.panmacmillan.com

The right of
Jeffrey Archer to be identified as the author of this work has been asserted by
him in accordance with the Copyright, Designs and Patents Act 1988.

All rights
reserved. No part of this publication may be reproduced, stored in or
introduced into a retrieval system, or transmitted, in any form, or by any means
(electronic, mechanical, photocopying, recording or otherwise) without the
prior written permission of the publisher. Any person who does any unauthorized
act in relation to this publication may be liable to criminal prosecution and
civil claims for damages.

A CIP catalogue
record for this book is available from the British library.

I
would like to
thank the following people for their invaluable help and advice with this book:
Rosie de Courcy, Mari Roberts, Simoi Bainbridge, Victoria Leacock, Kelley
Ragland,
Mark
Poltimor

V
ictoria Wentworth
sat alone at the table where Wellington had dined with sixteen of his field
officers the night before he set out for Waterloo.

General Sir
Harry Wentworth sat at the right hand of the Iron Duke that night, and was
commanding his left flank when a defeated Napoleon rode off the battlefield and
into exile. A grateful monarch bestowed on the general the title Earl of
Wentworth, which the family had borne proudly since 1815.

These thoughts
were running through Victoria’s mind as she read Dr Petrescu’s report for a
second time. When she turned the last page, she let out a sigh of relief. A
solution to all her problems had been found, quite literally at the eleventh
hour.

The dining-room
door opened noiselessly and Andrews, who from second footman to butler had
served three generations of Wentworths, deftly removed her ladyship’s dessert
plate.

Thank you,’
Victoria said, and waited until he had reached the door before she added, ‘and
has everything been arranged for the removal of the painting?’ She couldn’t bring
herself to mention the artist’s name.

Yes, m’lady/
Andrews replied, turning back to face his mistress.

The picture will
have been dispatched before you come down for breakfast.’

‘And has
everything been prepared for Dr Petrescu’s visit?’

Yes, m’lady,’
repeated Andrews. ‘Dr Petrescu is expected around midday on Wednesday, and I
have already informed cook that she will be joining you for lunch in the
conservatory.’

“Thank you,
Andrews,’ said Victoria. The butler gave a slight bow and quietly closed the heavy
oak door behind him.

By the time Dr
Petrescu arrived, one of the family’s most treasured heirlooms would be on its
way to America, and although the masterpiece would never be seen at Wentworth
Hall again, no one outside the immediate family need be any the wiser.

Victoria folded
her napkin and rose from the table. She picked up Dr Petrescu’s report and
walked out of the dining room and into the hall. The sound of her shoes echoed
in the marble hallway.

She paused at
the foot of the staircase to admire Gainsborough’s full-length portrait of
Catherine, Lady Wentworth, who was dressed in a magnificent long silk and
taffeta gown, set off by a diamond necklace and matching earrings. Victoria
touched her ear and smiled at the thought that such an extravagant bauble must
have been considered quite risque” at the time.

Victoria looked
steadfastly ahead as she climbed the wide marble staircase to her bedroom on
the first floor. She felt unable to look into the eyes of her ancestors,
brought to life by Romney,

Lawrence,
Reynolds, Lely and Kneller, conscious of having let them all down.
Victoria
accepted that before she retired to bed she must finally write to her sister
and let her know the decision she had come to.

Arabella was so
wise and sensible. If only her beloved twin had been born a few minutes earlier
rather than a few minutes later, then she would have inherited the estate, and
undoubtedly handled the problem with considerably more panache. And worse, when
Arabella learned the news, she would neither complain nor remonstrate, just
continue to display the family’s stiff upper lip.

Victoria closed
the bedroom door, walked across the room and placed Dr Petrescu’s report on her
desk. She undid her bun, allowing the hair to cascade onto her shoulders. She
spent the next few minutes brushing her hair, before taking off her clothes and
slipping on a silk nightgown, which a maid had laid out on the end of die bed.
Finally she stepped into her bedroom slippers. Unable to avoid the
responsibility any longer, she sat down at her writing desk and picked up her
fountain pen.

I
have put off writing this letter for far too long, as you are the last person
who deserves to learn such distressing news.

When
dear Papa died and I inherited the estate, it was some time before I
appreciated the full extent of the debts he had run up. I fear my lack of
business experience, coupled with crippling death duties, only exacerbated the
problem.

I
thought the answer was to borrow even more, but that has simply made matters
worse. At one point I feared that because of my naivety we might even end up
having to sell our family’s estate. But I am pleased to tell you that a
solution has been found.

On
Wednesday, I will be seeing...

Victoria thought
she heard the bedroom door open. She wondered which of her servants would have
considered entering the room without knocking.

By the time
Victoria had turned to find out who it was, she was already standing by her
side.

Victoria stared
up at a woman she had never seen before. She was young, slim, and even shorter
than Victoria. She smiled sweetly, which made her appear vulnerable. Victoria
returned her smile, and then noticed she was carrying a kitchen knife in her
right hand.

“Who...’ began
Victoria as a hand shot out, grabbed her by the hair and snapped her head back
against the chair. Victoria felt the thin, razor-sharp blade as it touched the
skin of her neck. In one swift movement the knife sliced open her throat as if
she were a lamb being sent to slaughter.

Moments before
Victoria died, the young woman cut off her left ear.

A
nna Petrescu
touched the button on the top of her bedside clock.
It glowed
5.56 am.
Another four minutes and it would have woken her with the early
morning news.
But not today.
Her mind had been racing
all through the night, only allowing her intermittent patches of sleep. By the
time she finally woke, Anna had decided exactly what she must do if the
chairman was unwilling to go along with her recommendations. She switched off
the automatic alarm, avoiding any news that might distract her, jumped out of
bed and headed straight for the bathroom. Anna remained under the cold shower
a
Htde longer than usual, hoping it would fully wake her.
Her last lover – heaven knows how long ago that must have been – thought it
amusing that she always showered before going out for her morning run.

Once she had
dried herself, Anna slipped on a white T-shirt and blue running shorts.
Although the sun had not yet risen, she didn’t need to open the bedroom
curtains of her little room to know that it was going to be another clear,
sunny day. She zipped up her tracksuit top, which still displayed a faded T’
where the bold blue letter had been unstitched. Anna didn’t want to advertise
the fact that she had once been a member of the University of Pennsylvania
track team. After all, that was nine years ago. Anna finally pulled on her Nike
training shoes and tied the laces very tight. Nothing annoyed her more than
having to stop in the middle of her morning run to re-tie her laces. The only
other thing she wore that morning was her front door key, attached to a thin
silver chain that hung around her neck.

Anna
double-locked the front door of her four-room apartment, walked across the
corridor and pressed the elevator button.

While she waited
for the little cubicle to travel grudgingly up to the tenth floor, she began a
series of stretching exercises that would be completed before the elevator
returned to the ground floor.

Anna stepped out
into the lobby and smiled at her favourite doorman, who quickly opened the
front door so that she didn’t have to stop in her tracks.

‘Morning, Sam,’
Anna said, as she jogged out of Thornton House onto East 54th Street and headed
towards Central Park.

Every weekday
she ran the Southern Loop. On the weekends she would tackle the longer six-mile
loop, when it didn’t matter if she was a few minutes late. It mattered today.

Bryce Fenston
also rose before six o’clock that morning, as he too had an early appointment.
While he showered, Fenston listened to the morning news: a suicide bomber who
had blown himself up on the West Bank – an event that had become as commonplace
as the weather forecast, or the latest currency fluctuation – didn’t cause him to
raise the volume.

‘Another clear,
sunny day, with a gentle breeze heading south-east, highs of 77, lows of 65,’
announced a chirpy weather girl as Fenston stepped out of the shower. A more
serious voice replaced hers, to inform him that the Nikkei in Tokyo was up
fourteen points, and Hong Kong’s Hang Seng down one. London’s FTSE hadn’t yet
made up its mind in which direction to go. He considered that Fenston Finance
shares were unlikely to move dramatically either way, as only two other people
were aware of his little coup. Fenston was having breakfast with one of them at
seven, and he would fire the other at eight.

Reconstruction by Mick Herron
One Half from the East by Nadia Hashimi
Eternal Breath of Darkness by Stauffer, Candice
Final Days by Gary Gibson
Cooper's Fall by Leigh, Lora
Blue Gold by Elizabeth Stewart
Murder at Union Station by Truman, Margaret
Transmission: Ragnarok: Book Two by John Meaney
The Dirt Eaters by Dennis Foon
The Mating Project by Sam Crescent
Our partner