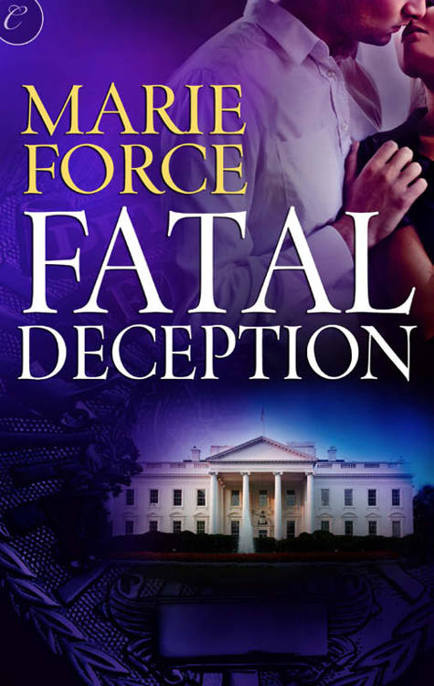 The wife of the White House deputy chief of staff has been beaten to death, and their one-year-old daughter is missing. D.C. Police Lieutenant Sam Holland is in charge of the murder investigation, but she’s forced to collaborate with Special Victims Unit detectives as well as thorn-in-her-side FBI Special Agent Avery Hill. Then, a cold case of her father’s resurrects old hurts—a distraction Sam cannot afford.

As Sam’s investigation heats up, so does Nick’s political career—and the heat carries over to their bedroom. Will Sam put the pieces together in time to catch a killer and find the baby, or will ambition, greed and lies prove fatal?

Exciting things happen in November. It’s the month we first announced the creation of Carina Press, the month of my Harlequin employment anniversary and it’s the month when we in the U.S. get gorge-yourself-on-bad-carbs-and-turkey day (otherwise known as Thanksgiving). We also get Black Friday (I think they call it that because of the color of your bruises after you’ve been run over by crazy shoppers).

We also have fourteen new stories in digital for you to enjoy post-turkey coma, in that long, long line outside the mall on Black Friday or, if neither of those is your thing, to enjoy just because you like a good book! Try to avoid the crime and violence of some of those crazy holiday shoppers and enjoy some on-page suspense instead. Marie Force is back with her popular Fatal series and ongoing protagonists Nick and Sam, in her next romantic suspense,
Fatal Deception.
Also returning is author Shirley Wells with
Dying Art,
the next Dylan Scott mystery.

I’m happy to introduce debut author Jax Garren’s new trilogy, which kicks off this month with
How Beauty Met the Beast.
This novella grabbed my attention when I read it on submission, with off-the-charts sexual tension, a wonderful, character-driven futuristic world, a smart, sassy heroine and a tortured, scarred hero who yearns for nothing more than to keep the woman he’s secretly falling in love with safe.

We have two authors with male/male releases this month, including L.B. Gregg’s contemporary romance
Men of Smithfield: Adam and Holden.
Also in the male/male niche, author Libby Drew has her first Carina Press release, paranormal male/male romance
40 Souls to Keep.

Susanna Fraser’s
An Infamous Marriage
is our lone historical romance offering this month, but one that won’t disappoint. Anchoring us in the here and now are several contemporary romance titles. Jeanette Murray’s
No Mistletoe Required
aims to get you into a holiday mood and December Gephart bursts onto the publishing scene with her debut, the witty, fun and romantic
Undercover Professor.

And don’t miss the upcoming conclusion of Shannon Stacey’s second Kowalski family trilogy,
All He Ever Dreamed.

Wherever your reading pleasure takes you, enjoy this month’s variety of releases as we gear up for the holiday season.

Thank you to my dear friend, Julie Cupp, who answers all my D.C. logistical questions, and props me up every day with laughter, friendship and endless support. Thank you to Captain Russell Hayes of the Newport, RI, Police Department who reads every Fatal book and always helps to make the police action more detailed and precise. Russ received a well-deserved promotion from lieutenant to captain since the last book, and is now overseeing Newport’s detective division. I’m thrilled for him! Special thanks to my husband Dan for the information about how security clearances work as well as the agency that oversees them.

Thank you to my beta readers Ronlyn Howe, Kara Conrad and Anne Woodall. I appreciate your input more than you’ll ever know. Thanks to everyone at Harlequin and Carina Press for their commitment to the Fatal Series, and to my agent, Kevan Lyon, for her help with the details. To my new editor Alison Dasho—thanks for taking on Sam, Nick and me!

A HUGE thank you all the readers who’ve embraced Sam, Nick and their story, especially the members of the Fatal Series Reader Group on Facebook, who cheered me on as I finished Fatal Deception. To answer your most pressing question: YES, there’s much more to come for Sam and Nick. Watch for Fatal Mistake in 2013!

And finally a huge thank-you to Sam and Nick, who continue to be such a joy to write. They make me feel lucky to show up for work each day I get to spend with them, and they’re so real to me after six books that some days it’s hard to believe they aren’t alive and living madly in love in Washington. So I choose to believe they’re doing just that.

“Can there really be this many kinds of mac ’n cheese?” Lt. Sam Holland asked U.S. Senator Nick Cappuano.

Sam’s normally unflappable husband looked somewhat flapped as he contemplated the wide array of choices. “How do we know which one to get?”

There were spirals and shapes and something called “Easy,” but Sam was certain it would be easy for everyone but her. “Maybe we should wait until Scotty gets here and let him pick out his favorite kind.”

“I want him to have what he likes in the house. How hard can it be?”

Sam scanned the shelves once again and decided it could be quite hard. “You don’t suppose there’s this many choices for chicken nuggets too, do you?”

The question seemed to suck the life out of Nick.

Sam pushed the grocery cart aside and reached for him.

Surprised by her rare public display of affection, Nick returned the embrace. “How am I going to convince him to come live with us permanently if I can’t even handle mac ’n cheese for a three-week visit?”

“He’s not going to care about the food, Nick. He cares about being with you.”

Sam took in the busy grocery store, overwhelmed by the task. Hunting down murderers was simple compared to this. “What’re we even doing here?”

Chuckling, Nick kissed her cheek and stepped back from her. “We’re doing what regular people do when they have a guest coming to stay with them.”

“For a few more minutes anyway.” Nick took the box that proclaimed to be easy off the shelf and put it in the carriage. “Let’s hope for the best.”

“That’s good of you, babe,” he said as he steered the cart toward the chicken nugget aisle. “So I’ve been thinking.”

Sam was busy enjoying the view of his denim-clad ass as she followed him through the store. He had rich brown hair that curled at the ends, hazel eyes and a mouth that was made for sin. And he regularly made sinfully good use of it. “About?”

“We need some help.”

“Let me rephrase—we need someone to run our lives, especially with Scotty coming to stay with us. What if we get caught at work or something comes up that we can’t get out of?”

Sam thought about that. “He could go to my dad’s.”

“True, but your dad and Celia have lives too. If Scotty lives with us, he’s our responsibility.”

“What do you think we need?”

“Someone to keep tabs on him when we’re not home. To drive him to practice if we can’t do it. To make sure the house isn’t a wreck, the dry cleaning gets picked up, the bills get paid, there’s dinner at night and some sort of schedule.”

Sam rolled her shoulders, already chafing at the thought of paying someone to boss her around. “I don’t know about this...”

“Someone to buy the mac ’n cheese and chicken nuggets,” he added with the charming smile that made her knees go weak. “You’d never have to step foot in a grocery store again.”

“We need someone like Shelby.” The tiny dynamo had put together their fairy-tale wedding in six short weeks. “Someone who can hold her own with you,” he added, ducking as she took a playful swing at him.

“Why does it have to be a her? I’m picturing a studly dude named Sven with muscles on top of his muscles.”

Over his shoulder, Nick rolled his eyes at her. “It doesn’t have to be a her. It has to be someone who can put up with you.”

Even though he was absolutely right about that, she’d never tell him so. “You’re skating on thin ice, my friend.” She followed him up one freezer aisle and down another until he stopped the cart in front of a mind-boggling selection of chicken nuggets. “I wonder if Shelby would be up for a career change.”

Laughing, Nick put his arm around Sam. “We could certainly ask her.”

“She won’t want to do it. She has a booming business.”

“You never know. It’s certainly worth asking. Maybe she knows someone who’d be interested.”

“Let’s ask around and see what transpires.”

“You’re sure this
she
of yours will know what chicken to buy?”

Nick opened the freezer door and withdrew a bag of breast tenders, studied them and put them back. “She can’t screw it up any worse than we are.”

He frowned at her. Their rare day off together had taken a tremendous amount of schedule juggling to pull off, and she hoped this call wouldn’t ruin their plans. They’d even declined the standing invite to Sunday dinner at the Leesburg, Virginia, home of his adopted parents, retired Senator Graham O’Connor and his wife, Laine.

While Sam took the call, Nick studied the chicken tender options. He’d been nervous about Scotty’s pending arrival for days now. The three-week visit was actually a trial run for all of them. The boy Nick had met at a campaign stop at a Virginia home for children in Richmond had become their close friend. When Nick asked him to come live with them permanently, Scotty’s hesitation had surprised him. With hindsight, Nick could understand the twelve-year-old boy’s reluctance to leave the place that had become home to him.

New Year's Eve by Caroline B. Cooney
Georgette Heyer by Simon the Coldheart
Undead and Unstable by Davidson, MaryJanice
In the Land of the Long White Cloud by Sarah Lark
Mary's Christmas Knight by Moriah Densley
Every Vow She Breaks by Jannine Gallant
The Mum-Minder by Jacqueline Wilson
Samantha Sanderson Without a Trace by Robin Caroll
Nightzone by Steven F Havill
Thorn Jack by Katherine Harbour
Our partner