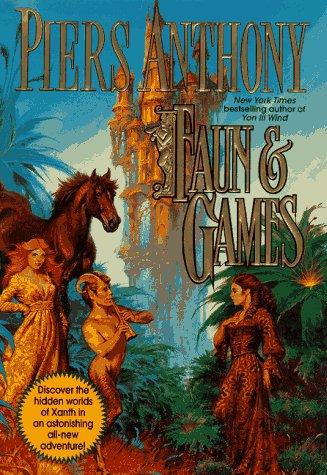 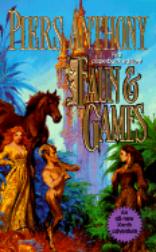 for a suitable spirit to save a magical tree, the astonishing

will find the answer to his quest. Piers Anthony puns his way into

quantum physics in this delightful journey.

All the characters and events portrayed in

this novel are either fictitious or are used fictitiously

All rights reserved, including the right to reproduce this book, or

portions thereof, in any form.

TorQ is a registered trademark of Tom Doherty Associates, Inc.

First Edition: October 1997 Printed in the United States of America

and looked down to the base of his tree.

There stood a fetching nymph

figure, and no clothing.

But there was something amiss.

"What do you mean'?" he asked as he sat up in a fork, still getting his

Come down and chase me, the way fauns

always do to nymphs."

Then he had it.

She dissolved into smoke and reformed

as a luscious clothed demoness.

entertainment or mischief while my better half waxes disgustingly

What gave me away?"

"If I tell you, will you go somewhere else?" It was usually possible to

get rid of demons if one made a suitable deal with them.

"Yes, if you want me to." Her bright yellow dress fuzzed, showing the

vague outline of her body beneath, with almost a suggestion of a

So there was a catch.

to the ground, landing neatly on his hoofs.

"What gave you away was

You were way too

Much of a nymph's appeal is in her seeming

reticence and lack of intellect.

"Follow me." Mentia whirled in place, so that her body twisted into a

tight spiral before untwisting facing the opposite direction, and walked

without running out of limb.

But of course Forrest didn't notice,

because nothing a demoness showed was very real.

She led him across the glade to a tree on the far side.

Forrest stared with dismay at the clog tree.

It was wilting, and its

clogs were falling to the ground.

That could mean only one thing: it

had lost its spirit.

As it happened, the clog tree's spirit was Forrest's friend: Branch

They had known each other for almost two centuries, because their

two trees were in sight of each other.

Almost every day Forrest would

drop out of his sandalwood tree, and join Branch in the glade between

them to dance a J'lg or two.

With luck, their 'igging would attract the

fleeting attention of a nymph or three, who would join ill, jiggling.

With further luck, jig and Jiggle would lead to a pleasant chase and

But this morning Branch's tree was in a sad state.

It wouldn't fade so

soon if its faun were merely absent; fauns and nymphs shared an

Let a human forester even come near such a tree with an axe,

and its faun would have a fit.

Let a faun split a hoof, and his tree

Such reactions were independent of distance; a faun

could run far away from his tree, and still be closely attuned to it.

They felt each other's pain.

"Are you trying to ignore me?" Mentia asked warningly.

could handle almost anything except that.

I am puzzled and alarmed by this dreadful scene. Do

you know anythin, about it?"

I just happened to note it in passing, so I looked for the closest

He glanced at her.

"You're one crazy organism."

"Thank you," she said, flushing red with candy stripes.

extended to her clothing and hair, and traces of it radiated into the

The clog tree's distress meant that Branch was in serious trouble, if

What could have happened?

Branch had been fine yesterday. In

gave her special fleetness, just as the sandals from Forrest's

sandalwood tree gave him excellent footing, and the clogs from Branch's

They had had quite a merry chase.

that was what fauns and nymphs did; they chased each other until they

came together, and then they celebrated in a manner that children were

not supposed to see.

Because it did tend to get dull just sitting in

one's tree all the time.

In fact, Forrest now remembered, the nymph, clad only in her slippers,

had led Branch a chase right out of sight.

Meanwhile her friend from an

music of wind through trees, so Forrest had had his own distraction.

Naturally he had chased her, and naturally she had fled, but not too

swiftly, because she was still singing her oak song. So he had caught

her, and they had celebrated in the usual fashion, while she continued

That had been interesting, because she had sung of every

detail of the experience they were sharing, making it a work of musical

Then she had returned to her tree, satisfied that her song worked.

There weren't any other nymphs around at the moment, so Forrest had

returned to his own tree and settled down for the night.

"So what are you going to do about it?" Mentia inquired.

She was right; he probably should be doing something.

"What do you think?"

"I think you will follow their footprints, so you can find out what

He set off in search of them.

He had no trouble following their tracks:

her slipper prints, which were hourglass shaped, in the manner of the

nymph herself, and his clog prints, which were forceful and furred. They

looped around other trees, as she made cute dodges and diversions. It

was the chase that counted; fauns and nymphs loved lo run almost as much

as they loved to dance.

celebration at the end.

Forrest remembered a nymph once who had been in

a bad mood, because her tree was suffering a fungus infestation, and had

This was of course a complete turn-off, and no faun

Any nymph who wanted nothing to do with any particular

faun had only to refuse to move, and he would leave her alone. Sometimes

a nymph teased a faun, pretending disinterest, then leaping into pursuit

the moment he turned his back. If she caught him, it was her advantage,

and he had to do whatever she wanted.

Of course that was exactly the

same as what he wanted, but other fauns would taunt him unmercifully for

Mentia, floating along beside him, was getting bored.

for me to depart?"

"Good." She remained where she was.

He realized that he should have