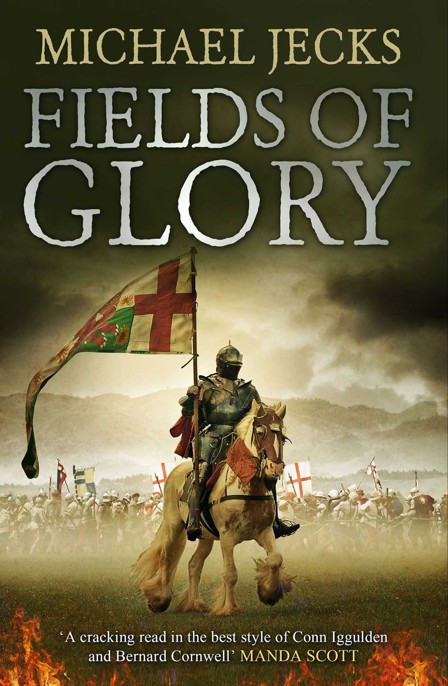 The Malice of Unnatural Death

The right of Michael Jecks to be identified as author of this work has been asserted in accordance with sections 77 and 78 of the Copyright, Designs and Patents Act, 1988.

For my parents, Beryl and Peter,
with much love.
A new direction . . .

For Andy and Mandy
in the hope this may distract you both from
the events of the last horrible couple of years.
Lots of love.

In those far-off days when I was still at school, I was a member of a book club that was devoted to non-fiction books on warfare, and bought vast numbers from them. They remain
on my bookshelves, the greater part of them very well-thumbed and yellowed, but all offering a haven of peace whenever I need it. Lyn MacDonald’s
They Called It Passchendaele
(which I
read when only eleven), books on the Somme, Max Hastings’
The Korean War
, and books about the Das Reich Panzer Division and Bomber Command – they are still there in front of me
as I type this.

But one in particular, sadly, is missing. It was a title I enjoyed so much that I kept offering it to other people to read. One of them took it – and lost it. I have mourned the loss of
that book for many years. It was
The Hundred Years War
by Desmond Seward, first published by Constable in 1978. I must have bought my copy in about 1983 or so, and I read it twice, back to
back, in my cottage in Oxted, Surrey.

The book is a gem of concise, undramatic but enthralling writing. So much so that I was forced to buy a new copy as soon as I was able to do so. Of course, it’s not the only book on the
Hundred Years War, and, if I’m brutally honest, it’s probably not the best. There are many other titles, from Jonathan Sumption’s superb studies of the same subject to books by
experts like Terry Jones (I have sung his praises many times before, but I’ll do it again: if you haven’t read
Chaucer’s Knight: Portrait of a Medieval Mercenary
it is high
time you did) – but it was Seward’s book that fired my imagination in the first place. It was his book that persuaded me to find out more about this terrible time, and his book that
inspired me to write about the Battle of Crécy.

It is difficult to write a book that includes the lives of real people.

In Medieval Murderers, the performance group I founded more than a decade ago, we have had many debates about whether or not to use real characters from history. When I set out to create my
medieval world, I was determined not to look at matters from the point of view of real characters, because I had a secret dread of someone doing that to me. I could all too easily envisage a time
when someone read an article on their . . . what will it be in a few hundred years? On their wall? In their retina? Well, no matter where they would see it, they would read about this fellow Jecks
who was alive in the early twenty-first century, and might want to write about him. They would have him as a witty, clever fellow, no doubt. Fair enough. And a criminal investigator. And they would
state that I was vegan, teetotal, a cat-loving, anti-hunting, football-supporting campaigner for the European Union. In short, I would have to give up my proud disdain for all things psychic and
take up haunting the foul blighter for his or her calumnies.

You can see why I did not want to take a real person and infuse them with my own feelings, beliefs and prejudices. It just wouldn’t be fair. A kind of ‘post-mortem slander’.
That is why, in my earlier books, although I make some use of characters like Walter Stapledon, I don’t look at the world through his eyes. He is simply included because he was there, in
Exeter, at the time. I couldn’t ignore him.

However, over time my attitude has changed. There are some situations which do need the perspective of key players. And for this book, I chose a man who has fascinated me for many years: Sir
John de Sully.

If you look him up on the internet, you will find his life documented at the website for the
Collegiate Church of the Holy Cross and the Mother of Him Who Hung Thereon
in Crediton
(
http://www.creditonparishchurch.org.uk/Sully.html
).

An extraordinary man, Sir John was questioned in his one hundred and sixth year, because of a dispute between two other knights about the arms they were allowed to display. He died, apparently,
the following year. But in his long life, he had survived battles all through the Edwardian period, from (probably) Bannockburn through to Najera. That means that the last time he went to war in
armour, he was some eighty-six years old.

His character can only be guessed at. In reality, of course, he was probably a hugely aggressive man, arrogant, proud and independent: a terrible enemy. But he came from Devon, too, and I have
deliberately made him a more complex fellow and not a mere brute.

Above all, this is the story of a vintaine. A small group of Englishmen in a foreign land, fighting and killing and dying for a cause which they only dimly understood. But they knew that there
was money to be looted, that there were women, and there was wine. They were not saints. Soldiers rarely are. But what they achieved was astonishing, and for that, if nothing else, they deserve
admiration.

The Battle of Crécy has always been a source of argument. Firstly because most historians find it inconceivable that the commander of such a relatively small force could
have deliberately sought to meet the full might of the massive French army in battle; secondly because there has been hot debate over the precise battle-formation used by the English during that
battle.