Read Fifty Is Not a Four-Letter Word Online

Fifty Is Not a Four-Letter Word 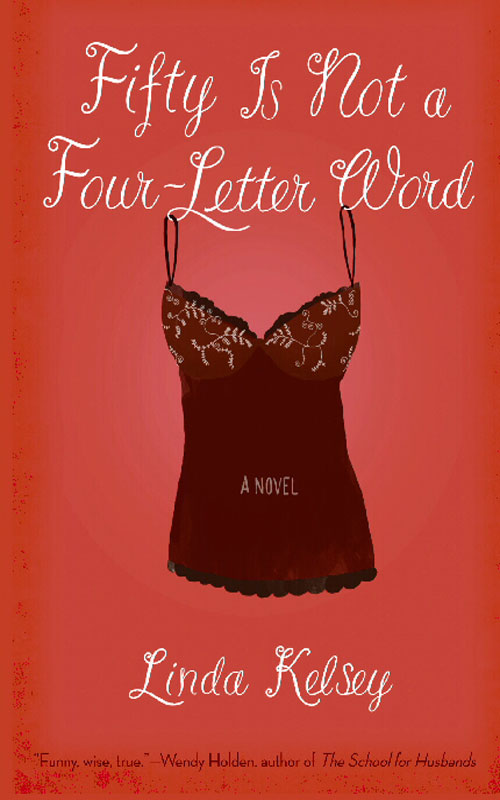 Visit our Web site at
www.5-spot.com
.

5 Spot is an imprint of Grand Central Publishing.

The 5 Spot name and logo are trademarks of Hachette Book Group, Inc.

An American in Paris

An American in London

Praise for
FIFTY IS NOT A FOUR-LETTER WORD

“Funny, wise, and proof that the perfect heroine doesn’t have to be a chardonnay-swilling thirtysomething, this made me laugh
and weep from start to finish. Linda Kelsey has the knack of making you care about her characters and she deals with huge
issues with the lightest touch. I wish I’d written this!”

—Cathy Kelly, author of
Past Secrets

“Bridget Jones for grown-ups! . . . Women ‘of a certain age’ will relate to Hope as she struggles to make sense of her life.
An enjoyable holiday read.”

“The novel is fun and frothy and very good.”

“Compulsive and poignant with well-drawn characters.”

“This is a coming-of-age novel with a difference. The age in question is fifty, which these days is arguably more difficult
to handle than those awkward teenage years. Wise, witty, and wonderful.

J
ust as I was about to get it right, at the very moment I knew we were on the road to recovery, Jack walked out. I’d just gotten
home from three days in Paris, three days that had changed me in ways I couldn’t possibly have predicted. Olly had gone upstairs
to do some last-minute revision for his A levels. Or so he said. His sudden studiousness, even at this eleventh hour, was
suspicious. More likely, he’d gone upstairs to get away from me. Or to download songs onto his iPod. Or to surf for porn.
Or to do whatever eighteen-year-olds do behind the closed door of their bedroom. I’m being unkind. But then we had just had
a major row. I’m not sure who started it.

I’d planned the seduction of my husband of twenty years all the way from Gare du Nord to Waterloo. As soon as I’d cleared
away the dishes, my femme-fatale act would begin. I was already tingling.

“What is it, Jack?” I asked, looking up over my shoulder from the saucepan I was scrubbing. “You look like a kid in nursery
school, trying to catch the teacher’s attention. Too timid to speak, are we?” I grinned and chucked him mockingly under the
chin with my rubber glove, depositing soap suds on his stubble.

I knew instantly it was the wrong thing to have done. I had been planning to seduce him, not eat him alive.

“Well spotted, Hope, that’s exactly how you make me feel.”

“Maybe you were, but I’m not.” Jack brushed away the suds with the back of his hand and breathed in deeply, as though bracing
himself for a blow.

And then he let me have it. “I can’t take it anymore, Hope. I can’t take
you
anymore. Not your cynicism. Not your selfishness. Not your belief that you’re the only woman in the universe who has had
to endure the humiliation of turning fifty. Or your self-pity. Or your sniping at me. Or the way you sabotage yourself with
Olly. Or how you think you can challenge your mother to explain fifty years of bad parenting in a single afternoon, just because
you’re in the mood for an answer. And the fact that you freeze whenever I come near you. For the first time in our lives together,
you’ve had six full months of opportunity to make it right between us. But it was all too much effort for you. Well, now it’s
all too much effort for me. I’ve had enough. It was never any secret that all these years I’ve supported you more than you’ve
supported me. But I didn’t mind any of that. Because despite your success, you needed boosting far more than I ever did. But
I’ve had it. That’s it. Finished. I’m moving out.”

“No, Hope, not now, I’m too weary to allow this to escalate into another row.”

He looked weary.
So
weary. Weary, ashen and old. For the first time, Jack, my rock, fifty-two and as fit as a man of thirty, looked old.

“There’s a small flat above the clinic, and it’s available, and that’s where I’m going,” he went on.

“But that’s unforgivable. How could you tell him before you’ve spoken to me about it? Before we’ve had a chance to discuss
it?”

“That’s typical, Hope. I tell you I’m leaving, and you’re concerned only about who comes first in the pecking order. It’s
irrelevant. If I could actually speak to you about anything at all without it turning into a row or a monologue about how
sorry you feel for yourself, then we’d never have gotten to this point.”

I turned away for a moment and stared into the sink, as though the grease floating on the surface of the water between the
suds might provide an explanation.

“Jack, is there someone else?”

But Jack had already left the room.

What use now for the Sabbia Rosa lingerie I’d bought on the Rue des Saints-Pères? I tried to give the saucepan my full attention,
scrubbing at it with steel wool. With slow deliberation, I lifted the sopping scourer from the sink, squeezed it free of water
and soap, and began to drag it along the inside of my left arm, bare except for the rubber glove. Again and again, back and
forth, I scraped it along the soft skin of my inner arm, watched the scratches and the teeny pinpricks of blood appear. Then
I leaned back over the sink and retched, vomiting chicken and ratatouille into the already unctuous water. My head was too
heavy to lift. I don’t know how long I stayed in that position, watching one tiny and forlorn tear after another plop into
the debris, plop, plop, a drop at a time, like a tap in need of a new washer.

Did I deserve this? Looking back over the past six months, I think perhaps I did . . .

H
e’s on me and in me. If a Peeping Tom up a ladder were to shine a torch through the window of our bedroom, he would think
he’d struck gold. Hope Lyndhurst-Steele and Jack Steele, unmistakably mid-coitus. But he’d be wrong. Appearances can be deceptive.
I’m not mid-anything. Only Jack is laboring away. Well, I suppose I’m doing
something
. I’m thinking, after all. But my mind—as so often these days—is elsewhere. My body has been embalmed, while my brain is turbo-charged.
A question keeps forming and re-forming in my head. IS . . . THIS . . . IT? IS . . . THIS . . . REALLY . . . IT?

And I don’t mean just the sex, although that matters. It matters a lot. I mean my whole life. Why does it feel so—
over
? So far, so very good. And now, suddenly, so over. I have no right to feel this jaded.

I really must try to concentrate. Even after almost twenty years, Jack’s a sensitive lover, and he can always spot when I’m
not paying attention. But with any luck, he won’t notice the fractional shifting of my head that allows me to see the LED
on my alarm clock, illuminating the time at 11:53. It’s a matter of honor—Jack’s honor, that is—that we make love on my birthday,
which happens to be today, January 1. With only seven minutes to go until it’s over, he has a deadline to meet. Sex on special
occasions is one of Jack’s quirks. My birthday. His birthday. The anniversary of the day we met. The anniversary of the day
our son was conceived (Jack is very precise with dates). Our wedding anniversary. Christmas, Jewish New Year, Chinese New
Year, and Divali. Well, the Jewish New Year, anyway. And quite a few times in between. But who’s counting?

I’ve been dreading this birthday for months. Now that it’s almost over, instead of feeling the relief that should come from
realizing that any given birthday is simply another day, I feel increasingly agitated, with little knots of nervousness gnawing
at my solar plexus. As though something dreadful is about to happen. Something in addition to the one dreadful thing that’s
already happened.

He’s withdrawing. I’ve long since withdrawn. Jack looks at me, more quizzical than cross. “And where do you go to, my lovely,
when you’re alone in your bed?” Peter Sarstedt. Jack’s a sucker for a good lyric.

“I’m sorry, darling,” I reply. “The party. A new year. Being fifty. Wondering where on earth we go from here. I guess it’s
all been a bit much. But you’ve been brilliant.”

“Never mind, old girl, you’ll soon get used to it.” He kisses me gently on the cheek and squeezes my hand briefly as he rolls
over to his side of the bed. “Sleep tight.”

I turn onto my side, too. We’re back to back, with a couple of feet between us. Or maybe the Atlantic Ocean. But it’s not
Jack, it’s me. It’s my fault, this growing gulf. I am
so
tired. I fall into an uneasy sleep.

The party had been Jack’s idea. “What’s to celebrate?” I’d countered curtly when he suggested it. Honestly, I didn’t used
to be this grumpy.

“Come on, Hope, don’t be such a misery. Just think of it as a New Year’s Eve party, which it will be, a not–birthday party
that happens to begin the night before your birthday. By the time it gets to midnight, everyone will be too drunk to remember
that half-a-century Hope has become eligible for HRT.”

“It’s a blessing you never planned a career as a salesman. You wouldn’t earn a penny in commission.”

“Okay, look at it this way. If we have a really big bash, Claire will come from Australia and Saskia from Rome. And so will
the rest of the clan. I could take you on a cruise, if you’d prefer.”

Jack was grinning, so I knew he didn’t really mean it about the cruise. What clinched it as far as the party was concerned
was the thought of all my émigré best friends turning up at the same time. I’m only moderately political, but there are two
things that could get me signed up for an anti-globalization campaign. One: the fact that Starbucks cappuccino sucks; the
other: that so many of my friends have abandoned England for a better life elsewhere. Thank God for e-mail.

Die for Me by Amy Plum
Vivir y morir en Dallas by Charlaine Harris
Call of the Colossus: An epic fantasy novel (The Mindstream Chronicles Book 2) by K.C. May
Smooth Irish (Book 2 of the Weldon Series) by Jennifer Saints
Park Lane by Frances Osborne
John's Story by Tim Lahaye, Jerry B. Jenkins
Hannah's Remission (Amish Romance) (Amish Circle Series Book 1) by Esther Weaver
Belle and Valentine by Tressie Lockwood
All We Had by Annie Weatherwax
Send Me Safely Back Again by Adrian Goldsworthy
Our partner