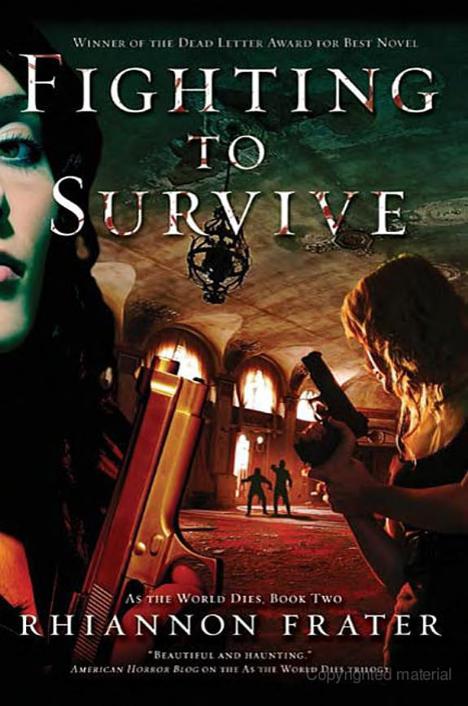 As The World Dies

This
is a work of fiction. The characters, situations, and most locations
(towns, names of streets, rural roads and country roads) are from the
author
’
s
imagination.

“
The
best-laid plans of mice and men often go awry.
”

This
popular quote sums up the last six months of work on this novel.

The
entire trilogy was first published online and there are over 1,600
pages of manuscript pages. We knew that we would have to revise and
edit the manuscript into three novels, but felt the work was fairly
complete and this should not be a big issue. Originally, my husband
and I thought we could have the book ready to publish in Fall of
2008.

The
second book, originally titled Struggling to Survive, ended up
missing a lot of scenes that I could have sworn were in the original
manuscript. After much investigation and reflection, I realized that
what was so clear in my head never made it onto paper. Entire
scenes, huge chunks of plot lines, and important moments of
characterization were missing. Since the original was written
piecemeal, often when I was traveling for work, I didn't always know
where I had left off when I wrote the next chapter. This resulted in
the second book not being nearly as ready as we thought.

So
I ended up writing about Jenni and Katie once again and was able to
weave the missing scenes back into the manuscript. By the time I
finished, over one hundred new pages were injected into the story.
All the vital missing scenes are now present in this version.

As
I revisited the world of the fort, I realized something I had not
before. The title was wrong. Katie and Jenni and the others were
not struggling to survive: they were fighting. Fighting zombies,
bandits and, in some cases, each other. Thus a new title was born.

I
hope you enjoy As The World Dies: Fighting to Survive.

Dedicated to my
loyal fans. Your encouragement

Thanks to George A.
Romero for your movies,

and
all the wonderful nightmares you
’
ve
inspired.

Those nightmares
ended up in this trilogy.

Special thanks to
Mom for your constant support of my writing and your dedication to
helping me achieve my dreams. You are the greatest!

And to my husband
for your technical expertise,

encouragement, and
patience when I spend long

1. Terror in the
Darkness

The hallway was
barely illuminated by the blue light shimmering up the stairs from
the TV in the living room. The light flickered along the walls and
ceiling, providing just enough light to make out her path. Groggily,
Jenni walked toward her youngest son's bedroom, which was located
near the top of the stairs. She shoved her long dark hair out of her
face and glanced down the staircase. Through the railing slats, she
could see her husband, Lloyd, in the living room, where he spent most
of his time at home staring at a plasma-screen TV. She could just
make out the black silhouette of his head against the brightly-lit
screen.

Warily,
wanting to avoid alerting him to her presence, she hurried into
Benji's room.

The
Mickey Mouse night-light illuminated the room just enough for her to
make out the form of her sleeping three-year old son. Resting in his
racing car-shaped bed, his little hand was thrown over his dark blond
curls, his lips parted as he softly snored. Smiling, Jenni knelt
down and tucked in his Winnie the Pooh blankets around his body. He
was just recovering from a cold. She wanted to make sure he didn't
get chilled. Her fingers gently caressed his soft, full cheek then
smoothed his curls back from his face. He resembled his father in
coloring and facial features. She prayed every day that he did not
have his father's violent temper or cruel streak. She wanted him to
grow up and be a good, strong man who would love his family and
protect them: not brutalize them and make them fear him.

A
noise from downstairs startled her. She tensed, waiting for the
sounds of Lloyd's footsteps on the stairs. Instead, only the distant
hum of voices on the TV wafted up to the room.

She kissed Benji's
forehead and breathed in his sweet baby smell. She loved him so.

Drawing
back, she looked over at the side table. There was an oatmeal cookie
still on his plate, but the milk was gone. Both the boys enjoyed a
nighttime snack before bed. She didn't see the harm in it. She used
all natural ingredients in the cookies and they were delicious.
Feeling a little hungry, she grabbed up the cookie and began to
nibble on it.

Don't
grow up to be like him, she wished.

He
won't grow up, a voice answered her.

She
frowned as she chewed the cookie. That was a horrible thought to
think.

He
doesn't live past tonight. You know that. Remember?

“
No,
”
Jenni whispered, pressing her hand to her forehead.
“
No.
”
She didn't want to remember.

Images
flashed in her mind: bloody, chaotic, and terrible.

“
No,
”
she moaned. She closed her eyes and she stuffed the cookie in her
mouth and chewed vigorously. It had lost all its flavor and gave her
no comfort.

She
looked up at him, trying to chew the cookie fast and swallow before
he could see she was eating outside of the strictly-regimented diet
he had created to keep her thin and beautiful.

“
What
the hell are you eating?
”
Lloyd's voice was terrible and his darkened form in the doorway
terrified her.

Jenni
looked toward her son to see his tender belly torn out and his
intestines strung across the bed. One of her hands clutched the
flesh tightly. Slowly, she raised her other hand to her mouth and
felt that her lips were slick with blood.

She
began to scream...

Jenni
woke and sat up sharply. Her heart thundered in her chest. In the
dim light leaking in around the edges of the makeshift tent she
shared with Juan, she could see that her hands were not covered in
blood. Pressing her fingertips to her lips, she felt their soft, dry
fullness and sighed with relief. Laying her forehead against her
drawn up knees, she took deep breaths and tried to calm her wildly
beating heart.

Juan's
hand gently touched her back then withdrew. Jenni knew he was used
to her nightmares and knew not to coddle her. She didn't want to be
touched or calmed down after the nightmares. It often took her
several minutes to gain full control of her senses and convince
herself she was truly safe and far away from her dead family.

The
blue tarp that made up the tiny tent rippled around her in the night
breeze. A light from outside peeked through a tear in the top of the
tent and cast a soft beam across her hands. They were clean. There
was no blood on them. All around her, outside the tent, she could
hear people softly talking, snoring, coughing, and sneezing, as they,
too, dealt with the night terrors that came with sleeping and
dreaming.

Shoving
her thick black hair back from her face, she took another deep
breath. She slowly accepted the moment as her reality. Why her
brain tried to convince her that she had not escaped the morning the
dead took over she could not fathom. It was Lloyd who had taken
Benji's tender flesh. It was Lloyd who had become one of the undead
and destroyed their family and home forever. None of it had been her
doing. She had barely escaped the house. Had it not been for Katie
saving her, she probably would have joined the ranks of the zombie
hordes. Katie had heard her screaming and driven up in that battered
white truck to rescue her. Together they had escaped into the Texas
Hill Country and found safety with a group of survivors holed up in a
construction site in a small town.

She
had survived. She was alive. She had rescued her stepson from the
camp he had been attending, she had found love with one of the
construction workers named Juan, and now, free from her dead
husband's reign, she was strong and living her own life.

Taking
a deep breath, that did not feel forced or ragged, she slowly
relaxed. Letting herself fall back onto the cot, she curled up on
her side, facing away from Juan. It was uncomfortable sleeping on
the twin cots that were bound together, but she liked feeling him
near her. In the gloom, he slid his arm around her waist and she
smiled.

In
silence, they lay side by side and waited for sleep to come again.

Sleep
hopefully free of the past and the terror that came with it.

2. A Moment of
Peace

Juan listened to
Jenni's breathing become deeper and deeper until he knew she was
asleep once more. He didn't move despite his arm falling asleep.
She was holding onto his wrist tightly. He didn't draw it away for
he wanted to make sure she felt his presence even in her slumber. It
was hard to see her struggling with the nightmares about what had
happened to her children. It was especially hard knowing that he
could not give her any real comfort.

But
Jenni kept the dreams to herself, mourning in ways he could not
understand. He was convinced that her evolution into a woman who
could dispatch zombies with eerie efficiency was her way of coping
with her children dying. As far as he knew, she didn't even talk to
Katie, her very best friend, about the death of her children. In
Jenni's waking moments, she was loving, outgoing, and funny. But in
her dreams, she was afraid and shattered emotionally. It broke his
heart.

The Mark-2 Wife by William Trevor
Poisoned Cherries by Quintin Jardine
Act of War by Brad Thor
The Playdate by Louise Millar
Forever My Love (Historical Romance) by Constance O'Banyon
Magebane by Lee Arthur Chane
Going Royal 01 - Some Like It Royal by Heather Long
Sword of the Gods: The Chosen One by Erishkigal, Anna
Flask of the Drunken Master by Susan Spann
The Heat of the Knight by Scottie Barrett
Our partner