Read Find Me in the Dark Online

Find Me in the Dark 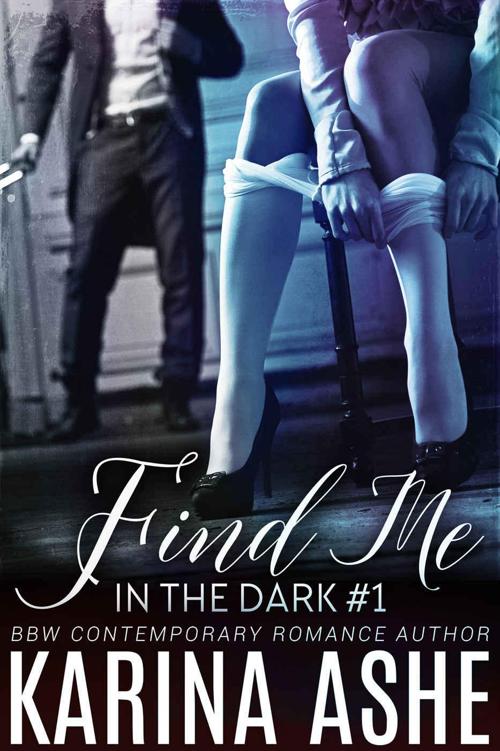 Find Me in the Dark

Laura's spent her college years running from her dark past. During the day the focuses on music, and at night she finds comfort in the arms of a man who refuses to show his face. But Laura can't hide forever...especially when the man who desires her is hiding secrets far darker than her own.

First ebook edition published May 2013 under the name "Love Me in Shadows (Behind the Mask, #1) by Tess Harper."

This book is a work of fiction. Names, celebrities, characters, places, businesses, trademarks and incidents are either products of the author’s imagination or are used fictitiously. Any resemblance to actual events or persons alive or dead is entirely coincidental. None of the celebrities, trademarks, works of art, artists, or businesses mentioned in
Find Me in the Dark
endorse this book unless otherwise specified. All stock art and fonts were either purchased or made availalbe free for commercial use by the artists/designers. None of the models, photographers, artists, font designers, etc endorse Karina Ashe or her work unless otherwise specified.

It comes in a black envelope tied with a silk black bow. My hand shakes as it slides over the artisan paper. I’m not used to experiencing such elegance outside of music. It makes me uncomfortable, like a little girl who sees a diamond for the first time and instinctively senses its worth.

Every morning a letter waits for me, tucked inside the metal mailbox in the entry of my aging brick dorm. The first time I received a letter, I thought it was for someone else. I’d taken it to the forty-something lady working at the front desk. Reluctantly, she’d opened the unmarked envelope and scanned the first line. “Are you Laura?” she’d asked.

She groaned as she leaned over the desk, handing it back. “It’s for you.”

“Oh.” Even before I read it, it felt like a priceless treasure—and after I did, I knew my life would never be the same again.

I press today’s letter to my stomach. My wool sweater scratches my wrist. I walk faster, glancing over my shoulder as if someone were watching.

Maybe someone is. Maybe it’s him
.

I don’t stop until I’m near the tree at the edge of the park. Students ride bicycles and leaves tremble in the afternoon breeze. Everything is normal. Still, my heart won’t stop racing. I glance around again, some foolish part of me expecting him, but he isn’t there. He never is. I’m alone save for a few bikers, and none of them linger in the park. Who would when it’s this early and so cold?

When I’m certain I’m alone, I open the envelope. Today it’s short. I know this because usually ink bleeds through every inch of the back of the page. That can’t be a good sign. My hands shake as I unfold the letter.

It’s a single sentence:
Meet me at the Orpheus fountain today at 4pm.

A chill rushes down my spine as if he’d just whispered the command over my skin. He’s never asked me to be anywhere before. I glance over my shoulder again but no one is there, only shadows.

I read the line again. And again.

I don’t follow my internal command right away. I read it once more and run my finger over the simple sentence, marveling at the power it has over me.

I haven’t told anyone else about the letters. I mean, I’ve been getting them for…far longer than I liked to admit. I don’t know how I’d begin to explain this mutual, sick obsession, or what my friends would say. Well, actually I had a pretty good idea of what they’d say—that I’d gone insane, that I needed help, that I shouldn’t encourage this kind of behavior, that he could be a psycho killer. But I think the thing that would scare them the most was that I needed receiving these letters more than he needed to write them.

I don’t know if that last part is actually true, but it sure feels like it.

I slip the letter in my inside pocket and walk quickly even though my next class doesn’t start for another twenty minutes. I go around the old brick building twice, then linger near the bulletin boards near the entrance.
The Chords
have a recital next Tuesday. A few people are offering their services for babysitting, but most of us are offering piano lessons, flute lessons, trombone lessons, and…well, you get the point. All of us are over-skilled at things no one has any use for.

Some students from my class walk through the door. As I smile, I unconsciously slip my hand inside my jacket until it finds the letter.

It’s still there. Still secret. For another day, at least, no one knows.

And I don’t want this obsession to end.

I don’t really get poetry. Yes, I know it’s beautiful and am often moved by it, but I don’t always understand what poems mean. I want that moment of clarity to hit me like a lightening bolt, but usually I only understand poems after they’ve been explained to me, and explaining them takes away some of their power.

It seems arrogant to call his words poetry, but sometimes the things he writes are as elegant as a
lei
, as sad as an elegy, or rough and sharp like a spoken word poet composing off the cuff in the back room of a dimly lit coffee shop. But I always understand his words. I imagine him speaking them over my skin. I don’t think any words have ever moved me as much as his.

I do not tell these things to Cassie as she waxes poetic about Byron.

Dolly groans. “Cassie, we all get it. You want to fuck a guy who’s been dead for over a century.”

Cassie sputters her lemonade over the table. “What do you mean!” she asks, wiping her mouth with the back of her hand.

“Hey, leave her alone,” Anna says. “Don’t tell her to get laid just because you haven’t in a few weeks.”

Dolly grins. There’s no point in her trying to deny it. She thinks that getting laid is the solution to everyone’s problems. “Alright, alright,” she concedes as she dips her spoon into her clam chowder. “So Laura, you in tomorrow night?”

Every Friday night we got together and chatted over chips, guacamole, and Anna’s homemade cookies. Oh, and we watched
The Notepad
.

I know it sounds silly. We’re four curvy girls living the dream in New York City, and yet we choose to hide out every Friday night in our overpriced and insanely small quad. But we don’t want to grow apart. All four of us met Freshman year at the Jullian Conservatory in an introductory Women’s Studies course, but we have different interests. Anna’s in the dance program, Dolly’s in the acting program, and I’m in the music program. Cassie transferred to Bertram and is now a literature and art major. I don’t know how I would have survived the past three years in NY without these girls. None of us are from the big apple originally, and each of us sacrificed something so we could be here. After that intro course, we worked things so that we could room together. There were no secrets between us.

Well, almost no secrets. They still didn’t know about the letters.

I realize I still haven’t answered her question. This isn’t good. I don’t like keeping things from my friends. The fact that I don’t even fully understand why I’m keeping this particular thing from them is…well, I don’t want to think about that either. “Of course I’m in. When am I not in?”

“Alright, alright.” Dolly sets down her glass of milk and puts her hands up. “You just seem a bit…distracted lately. I wondered if something was up.”

Something about the way she’s looking at me and the combination of her pale, freckled skin, shinning emerald eyes, and fire engine red hair reminds me of a super villain. My skin crawls. Luckily, I think I’m the only one who’s unnerved.

“You have a milk mustache,” Cassie notes as Anna giggles.

“Ugh,” Dolly groans as she gives Cassie a playful shove.

“Hey, what was that for? I’m the one who told you! Anna just cackled while Laura stared at you,” Cassie defended.

“They were being polite,” Dolly replies, then pauses. “Actually, Laura was being polite. Anna was kinda being a bitch.”

“Hey, I…” Anna bows her head in defeat, laughing again instead of defending herself.

“I’m your only true friend!” Cassie says, pointing at her.

“You’re too blunt for your own good,” Dolly grumbles as she gets up.

“Okay, I’m going to class.” Dolly starts to stomp off.

“You still have that milk mustache!” Cassie calls after her.

Dolly’s turns around, eyes narrowing as she grabs her napkin and wipes her mouth with a vengeance. “Better?”

“Perfect,” Cassie grins as Anna unsuccessfully tries to hide her laughter by placing her hand over her mouth.

Cassie shakes her thick, black hair and gets up with a sigh. “Damn. I should run too. Don’t know how I’m going to get over to campus by two.”

“Yeah…” Anna glances at her watch. She has to be in the studio in twenty minutes. “I’m probably going to be home late tonight, Laura.”

“I know,” I respond as they gather their bags and pile their napkins and plates on their trays. “See you two later.”

I don’t tell them where I’m going. My heart doesn’t stop racing until they’ve left the room, and even after, I remember the challenging look in Dolly’s eyes. She thought I looked distracted—that something was up. Maybe she guessed…

I don’t finish that thought. I tell myself it’s stupid. She can’t possibly know. And even if she does know, so what? I am just sort of seeing someone. I haven’t told them because it’s kind of one-sided and I’m not even sure if it will amount to anything, or what it even is.

I double check that my purse is zipped before pulling it over my shoulder. His letter is inside—the one asking me to go to the fountain. I feel a little tipsy when I stand. I have a feeling that today, everything will change.

I sometimes play at the Orpheus fountain. It’s a good way to make money, and it allows me to practice in front of an audience.

I’ve already had enough practice this week. I’ve come three times already. I didn’t need to come again today, and I wouldn’t have if he hadn’t asked me to.

I sit on the pavement and lean back into the fountain. Behind me, water rustles like leaves in a forest, except there is almost no vegetation in the center of the city. Three strangled trees stand up from the sidewalk. Right now their limbs are bare. Even in spring their leaves are small and make no sound that can be heard over the carts on the trolley rails, the people walking past, and the honks and curses and sounds of traffic.

But when I shut my eyes and lean back, I can hear the water. Cool cement seeps into the back of my shirt. The rim of the fountain is hard on the back of my neck, but the sound of water soothes me. It’s a hint of nature and solitude within the city. I try to find that kind of peace every time I play. It reminds me of the home I left behind.