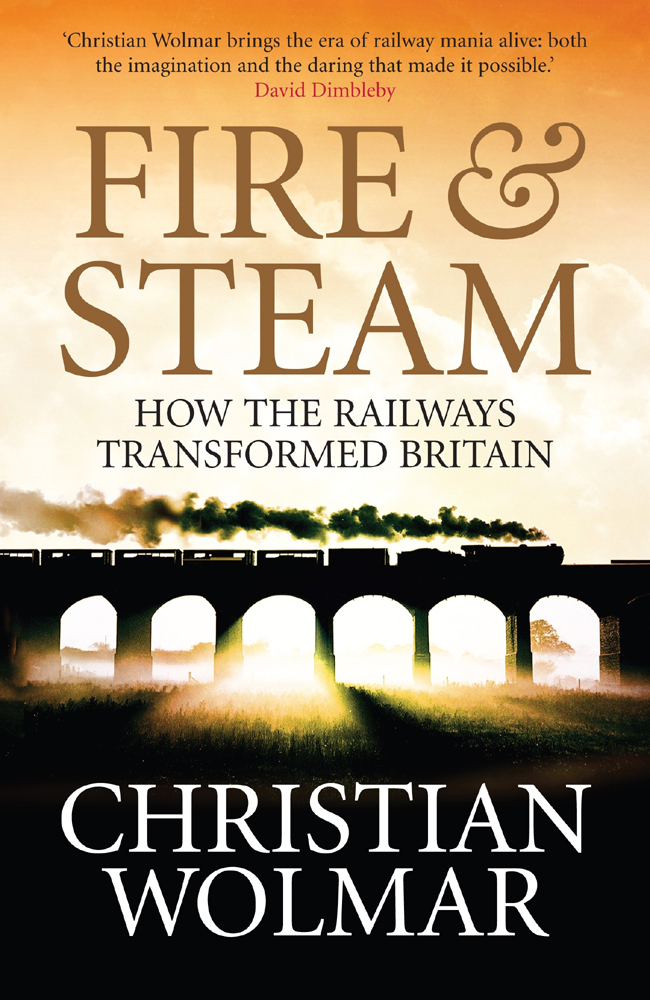 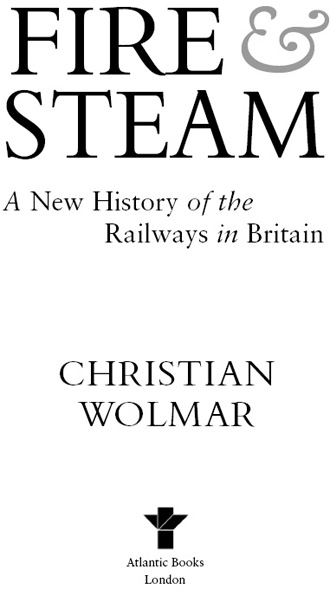 First published in Great Britain in hardback in 2007 by Atlantic Books, an imprint of Grove Atlantic Ltd.

The moral right of Christian Wolmar to be identified as the author of this
work has been asserted in accordance with the Copyright, Designs and Patents
Act of 1988.

All rights reserved. No part of this publication may be reproduced, stored
in a retrieval system or transmitted in any form or by any means, electronic,
mechanical, photocopying, recording or otherwise, without the prior permission
of both the copyright owner and the above publisher of this book.

Every effort has been made to trace or contact all copyright-holders.
The publishers will be pleased to make good any omissions or rectify
any mistakes brought to their attention at the earliest opportunity.

An imprint of Grove Atlantic Ltd

Dedicated to my wonderful children, Molly Brooks,
Pascoe Sabido and Misha MccGwire, even though
they think I am a mad trainspotter, and to the Railway
Children, the charity that helps less fortunate children
around the world (
www.railwaychildren.org.uk
).

There was a great temptation to write a nostalgic book about the railways. The smell of oil and steam emanating from the massive Princess engines in the Willesden depot and the more compact Kings and Castles in Old Oak Common just down the road is still with me. And so is the memory of the policeman who shouted âOi, you' and chased me around the back of the Willesden depot but lost out when I proved more nimble at jumping over the fence. My childhood is full of such tales as trainspotting was my escape from my mother's overcleaned flat in Kensington. My journeys with Mr Potter's Locospotters Club to places as far afield as Birmingham and Glasgow were the highpoints of my early years, even when I ended up in casualty to get a piece of grit removed after I had ignored the injunction not to stick my head out of the window when being hauled by a Merchant Navy-class engine.

However, this book is not it. And my trainspotting days ended when I became interested in girls. There is so much more to the railways than that vague nostalgic ache felt by many people my age, which leads thousands of people to flock to preserved railways across the country for steam galas every summer weekend. The railways deserve a wider appraisal, one which celebrates their achievement in opening up the world in an unprecedented way. The railways turned the Industrial Revolution into a social revolution that had an impact far beyond the routes where the tracks took the trains.

This book tries to do something which few writers â and certainly none recently â have attempted before: to put the history of the railways encompassing both their construction and their social impact in one easy-to-read volume. The railways constitute a fantastic story which has
often been told only by those obsessed with particular aspects of the system, individual lines or even specific types of locomotives. This book seeks to do more than that â to provide an overview of the invention and development of this wonderful system that changed the lives of everyone in the nineteenth century and continues to play a vital role in the economies of many countries in the world nearly two centuries after the first tracks were laid.

Of necessity that has meant omissions. Of the fifty famous railwaymen listed in a book of that title, there is no mention in my book of around half of them. There is, in other words, no attempt to be comprehensive. There are more than 25,000 titles listed in George Ottley's
Bibliography of British Railway History,
and this book is only 125,000 words long, necessitating a difficult selection of the parts of the history to include. Most importantly, I have made no attempt to give anything other than a cursory explanation of the technological aspects of the railway, many of which require books in themselves (and, indeed, have them). Nevertheless, I hope this book gives enough information to demonstrate that the railways were an invention that was unique in its impact, arguably far greater than any other previous technological development apart, possibly, from the wheel itself.

The choice of what to include has, therefore, been very difficult. After the introductory chapter on the prehistory of the railways, the obvious main starting point in
Chapter 1
is the Liverpool & Manchester Railway, a far more significant milestone than the oft-quoted Stockton & Darlington. The Liverpool & Manchester was conceived as a freight railway but in fact developed its passenger business far more quickly, demonstrating the huge latent demand for travel which, it seems, nearly two hundred years later we have yet to satisfy. Trains started the transport revolution that was later picked up by cars and planes, and the success of the Liverpool & Manchester ensured that the railways spread rapidly throughout Britain and, indeed, the world. As
Chapters 3
and
4
show, the railways took barely two decades to reach all but the most remote parts of the United Kingdom.

But the railways were not just about enabling people and goods to get around more cheaply and rapidly than ever before. There are so many facets of modern life that they did influence, it is almost easier to list
those that they didn't. This book focuses far more on all these developments than on the technological advances which made them possible.
Chapter 4
shows that by the 1850s people were flocking to the trains, taking advantage of guaranteed cheap third-class fares or the numerous excursion trains which gave them the first taste of the seaside. The railways enabled them to sample fish and chips in their home town as well as by the sea, and ensured that towns no longer had to have cows cluttering up the streets and the basements in order to obtain fresh milk. The railways changed the way business was conducted (
Chapter 5
), leading to the creation of the firm as we know it today; railway companies were, for a time, the biggest commercial concerns in the world.

While initially there was resistance in many rural areas to the advent of the railway, and some towns lost out as a result (Northampton is a tragic example, cited in
Chapter 3
), by the 1860s virtually every town, village and hamlet was clamouring to be connected to this growing machine (
Chapter 7
). Throughout the book I have tried to describe what travelling on the railway was like, as in the early days it must have been a pretty grim experience, without heating, lavatories, food or adequate lighting. Gradually the situation improved, as did safety (
Chapter 8
), but at a pace that was rather too leisurely. The railways became universally used and enjoyed a brief heyday (
Chapter 9
) before the war intervened.

All through the book, too, I have emphasized the political aspects of the railway and the role of the state â rarely benign and often, frankly, obstructive. Nowhere was this difficult relationship demonstrated better than by the two world wars (
Chapters 11
and
13
) where the railways' magnificent contribution to the war effort was inadequately rewarded by government.

While many histories of the railways concentrate on the Victorian period of development and growth, I felt it important to celebrate the role of the railways throughout more recent history too. The interwar period of the Big Four is often perceived as another heyday (
Chapter 12
) but perhaps the PR was better than the reality. And the reverse is arguably true for the story of British Railways, which was wrongly blamed for many of the calumnies inflicted upon it (
Chapter 14
). The
privatization of the railways (about which I have written in
On the Wrong Line
(2005), is covered in the last chapter, which also predicts that this nineteenth-century invention has a strong role to play in the twenty-first century.

I realize, too, that some of the information is patchy. There is more detail, for example, on the construction of the Forth Bridge and Settle to Carlisle railway than on the Severn tunnel or the West Highland line, but that is inevitable given the space constraints. For some people, this book will be a taster to explore the rich literature of railway history; for others it will be all they want to know about it, and indeed perhaps a little too much. The book, therefore, is a myriad of compromises between information overload and conciseness, and I am sure many people will dispute my choices and wonder why I have taken the narrative down some strange branch lines, but hopefully that will not detract from getting as much enjoyment from reading it as I have had from writing it.

I owe considerable thanks to those who read the draft and commented on it. Tony Telford did a fantastic job working on the draft, both saving me from errors borne of ignorance and adding ideas that greatly improve the book, and I cannot express my gratitude to him enough. John Fowler contributed greatly, too, in ensuring that there were no major omissions and Nigel Harris picked up numerous errors. Phil Kelly's advice was very helpful, and thanks are due, too, to Jon Shaw, Stan Hall, Pip Dunn, Toby Streeter, Rupert Brennan-Brown, Mike Walton, Roger Ford and Mike Horne, all of whom made very helpful suggestions. My partner, Deborah Maby, read the proofs with a practised eye. I am also extremely grateful to my agent, Andrew Lownie, without whom this project would not have happened, and, of course, Toby Mundy and Sarah Norman at my publishers. Colin Nash and Colin Garratt at the railway photographic agency, Milepost 92Â½, were extremely helpful and generous in finding and providing photographs. The errors, naturally, are mine, and please advise me of them. I can be contacted through my website,
www.christianwolmar. co.uk
, or via the publishers. There will, hopefully, be further editions and therefore I invite comments and suggestions. Enjoy the journey.

One of the least known facts about Louis XIV is that he had a railway in his back garden. The Sun King used to entertain his guests by giving them a go on the
Roulette,
a kind of roller-coaster built in the gardens of Marly near Versailles in 1691. It was a carved and gilded carriage on wheels that thundered down a 250-metre wooden track into the valley, and, thanks to its momentum, up the other side. The passengers would enter the sumptuous carriage from a small building in the classical style that could lay claim to being the world's first railway station. Then three bewigged valets would push the coach to the top of the incline, giving the overdressed aristocrats a frisson as it whooshed like a toboggan down the hill.

The Knife Sharpener's Bell by Rhea Tregebov
Zombie Rules (Book 4): Destiny by Achord, David
The Playboy's Baby: A BWWM Pregnancy Romance by Blue, Tasha
At the Queen's Summons by Susan Wiggs
The 7th Woman by Molay, Frédérique
Edge of Hunger by Rhyannon Byrd
Mask of Duplicity (The Jacobite Chronicles Book 1) by Julia Brannan
The Khufu Equation by Sharifov, Rail
The Billionaire's Christmas Baby by Victoria James
A Season of Gifts by Richard Peck
Our partner