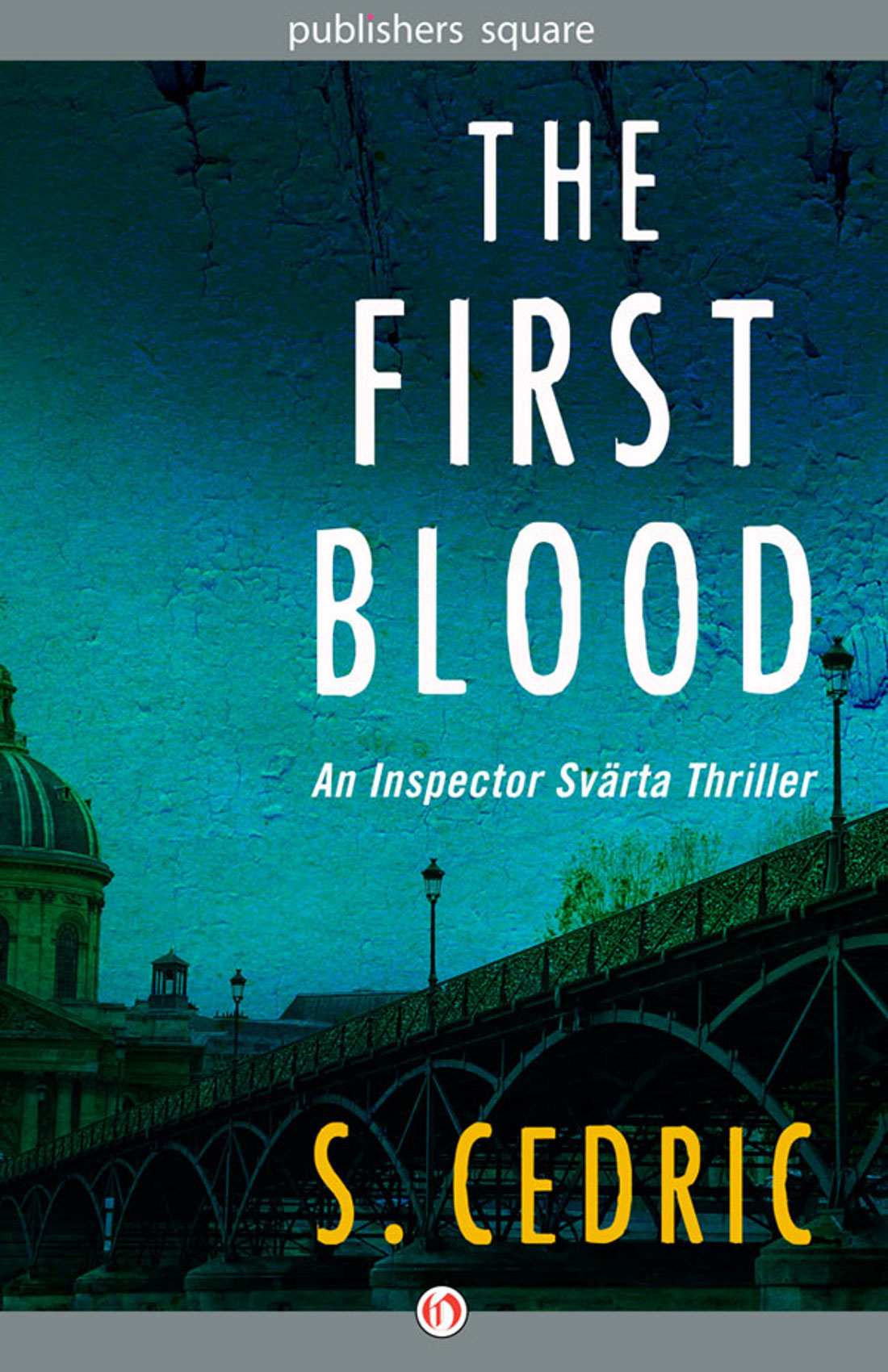 Lost in a flood

A small drop of deep-red blood fell on the edge of her plate. When it hit the porcelain, it took on the shape of a tiny, hypnotic sun.

Madeleine Reich did not understand what was happening right away. She was having dinner with her husband, Jonathan, at their large dining-room table, just as they always did. It was precisely 9 p.m. Both of the Reichs were fifty and liked the rituals that reigned over every aspect of their daily lives—absolutely
every
aspect. Tonight, like every other night, Jonathan had ordered the meal from their favorite Japanese takeout while she set the table, as usual. Maybe it seemed inconsequential, but that kind of detail was of utmost importance to Madeleine. She had chosen a white embroidered tablecloth and taken out the Limoges china. After making her fortune in a business she started—it had already been fifteen years—Madeleine ate only on fine china and drank from the best crystal glasses. She took almost childlike pleasure in being among the privileged, the
well-to-do
. She knew that if her parents had still been alive, they would have been extraordinarily proud of her.

Success did take its toll. Madeleine had just finished a long, grueling day. Problems at work had drained her. She was in a hurry to eat. Then she could relax while watching a television show selected from the on-demand options, and get a good night’s sleep. Tomorrow, it would start all over again. At dawn, she would be in the ring with multinationals that never seemed to rest. But that would be tomorrow. There was no sense dwelling on it now. She savored her soup, taking small sips, and then she picked up the bottle of Asahi—Jonathan had ordered one for each of them—and filled her glass to the brim. The beer was cold, just the way she liked it. There was an assortment of sushi, set out in an orderly and reassuring manner. A second dish held sashimi, set alongside thin slices of pink ginger. Using her chopsticks, Madeleine was dipping an appetizing California roll in a small bowl of soy sauce.

The sight of blood interrupted her.

Surprised, Madeleine leaned over the red splotch on her plate.

A second drop of blood, rounder and larger than the first, fell and burst on the back of her hand. A bad omen.

Is my nose bleeding?

She set the California roll down on her plate, carefully laid the chopsticks on their stand, and wiped her hand with her napkin. She touched her nostrils. No, the bleeding did not come from there. Her nose was perfectly dry.

“Darling?” Jonathan said, having just looked up from the other side of the table. “Oh, my God.”

Why? What is happening? Where is the blood coming from?

“Madeleine, how did you do that?”

Madeleine gave him a puzzled look, and Jonathan jumped up, letting his chopsticks and napkin fall askew on his plate.

“We have to do something,” Jonathan said, his voice tense.

His face had gone pale, and his eyes showed signs of panic, but he was clearly trying not to frighten his wife. In vain. Madeleine felt a thick liquid run down her right cheek.

Jonathan came around the table.

“Your cheek. It’s your cheek.”

My cheek.
Madeleine finally became aware of the pain. It was a small tingling sensation that was intensifying. So it was her face that was bleeding.

“How did you do that? What did you cut yourself with?”

She wanted to say that she had not cut herself, that she did not understand what he was talking about, but more and more blood was flowing onto her plate and the white tablecloth. She
had
cut herself, somehow. She pushed her chair away from the table, and the blood dripped on the hardwood floor.

“I need a bandage, something to stop the bleeding,” she said.

“But how did you do that?” her husband repeated.

Disconcerted, Madeleine raised a hand to her cheek. It was sticky with blood. At that moment, the pain shot through her cheek, as if someone was...

ripping open her skin. Madeleine screamed and doubled over. The pain was worse than anything she had ever felt before. Except for one time. A long time ago. The pain had been the same. She had forgotten how awful it had been.

“I’ll call an ambulance,” Jonathan said, rushing to the bureau where they kept their cell phones.

Jonathan grabbed his phone. His hand was shaking, and he dropped the device.

“Jonathan, listen to me.”

He knelt down to pick up the phone.

“Don’t worry, darling. I’m calling the paramedics. Everything is going to be all right.”

“Don’t call anyone. I just need a bandage.”

Madeleine’s head was spinning. Memories were coming back.
It had been so long ago.
She kept telling herself that it was impossible, that she had to be wrong. Yet it was happening. It was, without a doubt, happening, in the sanctuary of her own home, at her luxurious table, despite all the precautions she had taken.

No, it can’t start again.
She reasoned with herself.
It cannot. Not after all these years.

But what else could it be?

She could not finish her sentence. The skin on her cheek burst open, making a hideous tearing sound and uncovering the red muscle underneath. The pain blinded her. More blood sprayed the floor.

Madeleine shrieked. And three feet away, her husband cried out.

She wanted him to shut up but refrained from yelling at him. He was not helping, and, in any case, he could not understand. The poor man was in the dark. She had never told him. It was better that way.

Seeing him try desperately to use the phone, she ordered him to stop. “Do not call anyone. You must not.”

Madeleine clenched her fists. The pain was getting worse. Blood was streaming onto the floor.

“It doesn’t hurt anymore. It’s not necessary. Put the phone down.”

He had finally managed to punch in the number and held the small phone to his ear.

Her husband shook his head. “Madeleine, you don’t understand.”

Jonathan stared at his wife as if he had never seen her before. And Madeleine saw a graying man of fifty who could no longer hide his stout belly in the tailored Italian suit she had given him. He was a simple man who had escaped the projects in Marseille. He had shared her life for the last fifteen years without knowing anything about her—without any idea of what she was capable of. And she suddenly found him to be ridiculous, pathetic even. He did not understand what was happening under his very nose every day. How could she have hoped that he would protect her? She pushed aside her pernicious thoughts. She knew that Jonathan had nothing to do with this, that he could not know. She was the one who had always held the cards. She had had enough time to prepare. Decades. She should have known that one day the past would resurface, as it was right now. Tonight. In her flesh.

In reality, searing pain was moving down her cheek, along torn skin of the wound that was opening on her right cheek. She was afraid to look in the mirror and see the extent of the damage. Yet she would have to resign herself. Before it continued. Before there was a second wound.

“You should see someone. There’s so much blood.”

Jonathan shook his head. He waved the phone, looking lost.

She teetered as she rose to her feet. The fiery sensation was riddling her cheek, and she did not feel well at all.

And then it happened, exactly as she knew it would. The pain spread to the other cheek.

She took a few steps and grabbed the china cupboard. She saw a vase fall but could not catch it. It shattered on the floor. Madeleine was now shaking from head to toe.

Her husband moved toward her.

“Leave me,” she said, stifling a sob.

She managed to climb the stairs to the second-floor bathroom. She locked herself in.

Jonathan stood on the other side of the door.

Inside, Madeleine held onto the sink.

She looked in the mirror, trying not to flinch.

Madeleine Reich had always been beautiful. At fifty, her full head of blond hair and steely eyes made her look barely forty. Her colleagues and competitors mostly saw the shark in her. She had eliminated obstacles, one after another, in her pursuit of success, whatever the cost.

Her face was smeared with pulsating blood,

She turned on the faucet and splashed water on her face. The wound on her right cheek was horrible. The gash ran from her ear to her lips. It was so deep, she could see the white bone under the throbbing tissue. Then a fresh veil of blood covered her cheek again. It was as if some savage butcher had wielded his knife on her.

Her husband’s voice was filled with distress.

A Day of Fire: A Novel of Pompeii by Stephanie Dray, Ben Kane, E Knight, Sophie Perinot, Kate Quinn, Vicky Alvear Shecter, Michelle Moran
Utopía by Lincoln Child
Turkish Delights Series by Liz Crowe
Bayne by Buckley, Misa
Decorum by Kaaren Christopherson
Rules of Ascension: Book One of Winds of the Forelands by Coe, David B.
Give the Devil His Due by Sulari Gentill
Sin by Josephine Hart
Murder in the Collective by Barbara Wilson
Death Echo by Lowell, Elizabeth
Our partner