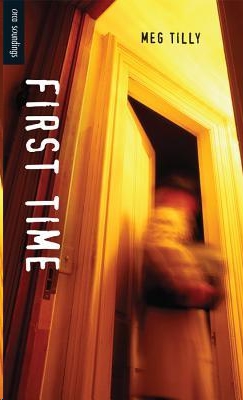 Summary:
Sixteen-year-old Haley must deal with unwanted advances from her mother’s new boyfriend.

Orca Book Publishers gratefully acknowledges the support for its publishing programs provided by the following agencies: the Government of Canada through the Book Publishing Industry Development Program and the Canada Council for the Arts, and the Province of British Columbia through the BC

To all of us whose first times were less than perfect.

I’d like to thank my husband, Don, for his tireless help and encouragement with all my writing. Bob Tyrrell, the publisher of Orca Books, for asking me to do one. I feel there is a real need for these types of books and am proud to be part of the Soundings series. Andrew Wooldridge, for his sensitive editing and brave championing of interesting, relevant-to-teens material. Teresa Bubela, for designing a thought-provoking cover. And Dayle Sutherland, for all her tireless work, getting the word out about Soundings books.

Meg Tilly is a former actress and a bestselling novelist.
First Time
is her first time being published by Orca. Meg lives in Vancouver, British Columbia.

Standing at the end of our drive waiting for...get this...Lynn to pick me up in her
car
!
Her
car. She called me up on her cell phone twenty minutes ago. She was just pulling out of the Metro Toyota dealership in Victoria. And yes, I know, my driving instructor would say, “Talking on a cell phone while driving is unsafe behavior,” but she just
bought
herself a car, for Christ’s sake! She’s gotta talk
to somebody, and who better than me? Of course she had to call me.

So here I am, waiting for Lynn. Wondering if I have time to go back inside and get the lavender zip-up Juicy sweatshirt I scored at the after-Christmas sales. I doubt she’ll be able to get back to Sooke so fast, even going the speed limit. Not only that, but this wind seems to be picking up a bit, and the sweatshirt seems like a two-girls-riding-around-town kind of ensemble. It’s a casual, innocent, sexy look. There’s something about the way it fits that makes me look more well-endowed than I am, and then it has that ribbing that makes my waist look really small.

That decides it. I sprint back up the drive, climb the porch steps, dart through the kitchen. I don’t bother taking my runners off because I’m in a hurry. Besides, there’s nobody at home to give me hell. At least that’s what I think, until I pass by the den and see a movement inside. I get that tingly jolt of adrenaline for a second.
It’s Larry, my mom’s fancy new lawyer boyfriend, sitting behind mom’s desk, a bunch of papers spread out before him. According to Sondra, Mom’s best friend, “He’s everything a woman could want in a man. He’s smart, funny, rich and handsome. He’s the whole package.” And I suppose, if you’re a middle-aged woman, perhaps he is all that. My mom’s been really happy ever since they started dating, so I’m glad for her. It’s just, I don’t feel that comfortable around him. I want to like him, but I don’t. I wish she hadn’t given him the key.

“Hey, Haley,” he says, standing up. He’s got his tie loosened and his suit jacket hanging over the back of the chair. “Where are you off to in such a hurry?”

“Can’t talk,” I say, keeping my legs moving. “Lynn’s waiting for me.” I don’t wait for his answer. I’m not trying to be rude, but I don’t like hanging around him, especially when Mom’s not home. There’s something about him that gives me the creeps. Luckily he doesn’t follow me.
Last week he did, right into my bedroom. Can you believe that? Hands casually slung in his slacks, dress shirt sleeves rolled up, leaning in my doorway, like he thinks he’s some kind of male model in a Brooks Brothers ad. Had some sort of bogus excuse about wanting to see the painting I did in art class. Like I would show it to him.

I find my sweatshirt in the pile of clothes by my bed. That’s where I keep my favorites. Easy access. Don’t have to dig through all the mounds of stuff on my floor. Drives my mom nuts, how I have my room laid out. But really, she doesn’t understand. It may look chaotic, but it’s actually quite organized.

Back down the stairs, through the house, don’t glance in Larry’s direction, even though he’s in the hallway now. I give him a wide berth, make a bit of a half circle. I don’t know why. Maybe it’s because I don’t like him in my airspace. I fly out the kitchen door and am halfway down the porch steps when my cell phone rings. It’s Lynn.

“I’m almost there,” she says. “Just passing the gas station. Are you out front?” It’s hard to hear her over the music she’s got blasting.

“Almost.” I’m running full tilt down the drive. “I’m almost there. Okay! I’m here. What should I look for? What color’s your car?”

“Wow! That sounds great.” Even though I have no idea what a Toyota Echo is. And I have to say, I’m kind of stunned that out of all the color choices there are in the world, she chose something as boring as white.

Just as I’m thinking that, I spot her car coming down the road. It’s the pounding music that gives it away. I never noticed before, but there are a lot of white cars on the road.

“Whoohooo!” I yell, pumping both fists like she just made the winning score for the team. She leans on her horn. Her horn works well. It’s good and loud. Heads turn,
that’s for sure. I’m waving, she’s waving. She’s got the windows of her car wide open, her auburn hair swirling around her, sunglasses on, a big smile on her face. She looks so grown up.

I get scared for a moment. It’s weird. Doesn’t make sense. I mean, she’s my friend. She’s bought a car. This is exciting. Something she’s been saving for. So why do I feel like somebody punched me in the gut? Like it’s the beginning of the end and she’s outgrown me already, just doesn’t know it yet. I should have brought my sunglasses too.

“Hop in,” she says, just like a character in a book or movie. I open the door and get in.

“This is totally awesome!” I say, and we smile at each other as she pulls out. I strap in, but I do it casually, like an afterthought, so it doesn’t look like I don’t trust her driving skills.

We are sailing down the road, free as birds, and now that I’m inside, the music is so loud it’s vibrating the fillings in
my teeth. I have to admit, I misjudged this car. It doesn’t seem staid to me at all anymore. Not one bit. The air inside is electrified. We’ve just entered a whole new world. The world of people who ride in cars without parents, and I’m glad I’ve got my good-luck sweatshirt on.

“Where shall we go?” Lynn asks. She really does look like a movie star. It’s like somebody sprinkled that extra something over her that she didn’t have before. An extra something that I don’t have. I feel awkward, sort of tongue-tied, which is ridiculous. This is Lynn. We’ve been best friends since eighth grade, for crying out loud.

“Okay.” Lynn shrugs. “Dairy Queen it is then.” She jerks the steering wheel hard. Pulls a U-turn right in the middle of the
road. I’m not expecting it, so I don’t have my body set. I thought she was going to pull into a drive to turn around or something, but she didn’t. Lynn’s kind of a daredevil.

“Whoa!” I say, my hands reaching out to grab the door, the dashboard, to steady myself. She laughs like I’m a comedian, and I laugh too.

We ride for a while with the wind blasting our faces. The sun is setting, streaking the sky between the trees with dusky gold and tangerine, and it’s beautiful. I don’t know what is better, watching the sunset through the windshield or the reflection of it dancing across Lynn’s sunglasses. It’s one of those moments where I want the world to stop, time to hold still, so I can just take my time and savor it. Because magical moments like this, they don’t happen that often. I catch my breath, like maybe that will make it pause, but it doesn’t work. Time keeps barreling forward. Lynn makes a left and the sunset is to the side of us now, lost behind a thick bank of trees.

Dairy Queen is a bit of a letdown. Nobody we know is there. Nobody to watch us arrive in Lynn’s car. No one oohing and ahhing with envy. I don’t piss and moan about it though. Don’t want her to remember whose idea it was. Instead I act like I really had a craving for ice cream and splurge on a Pecan Mudslide. Then it’s Lynn’s turn to order, but instead of
getting some kind of ice-cream thing like she usually does, she says, “I’ll have a coffee, please.”

Coffee? I look at her to see if she’s joking, but she doesn’t appear to be. Since when does Lynn drink coffee?

And then I see the way she’s smiling at the guy at the till, and the whole “coffee” thing starts making sense. It’s some guy who graduated from our school last year. He’s got that whole casually tossed, carefully styled, highlighted hair thing going on, a tiny silver lightning bolt pierced through his earlobe, a poet’s patch lurking under his lower lip. He was one of the hotshots of the graduating class. What was his name? I can’t remember. I think it was Chazz or something like that. I’m kind of surprised to see him working here. I would have thought he’d be at university somewhere, on a sports scholarship or something.

Now, normally this kind of guy wouldn’t give us the time of day. He’d never even glance in our direction. But he
must see what I noticed in Lynn on the car ride over, because he’s looking at her like he’s a hungry dog.

Pericles of Athens by Vincent Azoulay, Janet Lloyd and Paul Cartledge
Savage Season by Joe R. Lansdale
The Kills: Sutler, the Massive, the Kill, and the Hit by Richard House
The Red-Hot Cajun by Sandra Hill
Haunted by Cheryl Douglas
Under This Blazing Light by Amos Oz
Signs by Anna Martin
Take Me for a Ride by Karen Kendall
Blissfully Snowbound (Blissful, #1) by Red Phoenix
The Key by Jennifer Sturman
Our partner