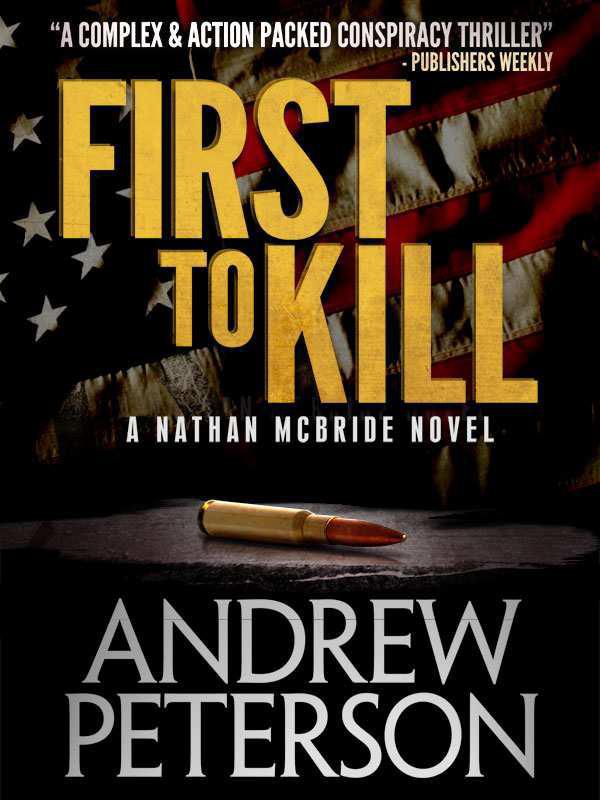 To my wife, Carla. She’s the most supportive and influential person in my life.

The warm glow from the cabin’s window told a lie. The scream from within told the truth. Bound to a chair with baling wire, the federal agent was thoroughly battered. Eyes swollen shut, fractured cheekbones, chipped teeth, and worse. Kicked aside, six severed fingers lay scattered on the plank floor. The air reeked of cigar smoke and charred flesh from dozens of burns that marched up the man’s arms and across his chest like tiny cattle brands. Where he’d struggled against the wire, his wrists and ankles were torn and bleeding.

“He’s out again.” Ernie Bridgestone grabbed the man’s hair and yanked his head back. Bridgestone, a trained drill instructor, was tall and lean with a thin mustache, cropped dark hair, and acne-cratered cheeks.

“Leave him be. He’s had enough.” Leonard Bridgestone towered over his younger brother and outweighed him by sixty pounds. Aside from their clothing, blood-spattered T-shirts, old woodland fatigues and combat boots, they looked nothing alike except for their pale blue eyes—a gift from their mother’s side. They never talked about their father’s gifts.

Ernie released him. “I’ll give the dumb son of a bitch credit, he lasted longer than I would’ve.”

“Let’s hope you never have to find out.” Leonard was a trained Army Ranger, but unlike Ernie, he’d been decorated during the first Gulf War with a Silver Star, two Purple Hearts, and a Navy Cross for rescuing a downed Hornet driver. He grabbed a five-gallon can of gas and began sloshing its contents around the cabin’s stark interior. He saved the last two gallons for human flesh and tipped the can just above the agent’s head. The man shivered and moaned under the stinging fluid.

As the smell of gasoline fouled the air, the rain intensified. The windows flashed white. Once. Twice. Half a second later, thunder rattled the glass.

Leonard parted the curtain and looked out the window where morning twilight crept across the Sierra Nevada Mountains. “I figure we’ve got three days, max. He said his last check-in was five days ago and they expect to hear from him at least once a week.”

“But Lester saw him in town yesterday. He could’ve reported in already.”

“Naw, he would’ve told us. It only took two fingers to verify he was FBI. Nobody can take what we did to him, not for five hours. No way.”

Ernie spat in the man’s face. “I still can’t believe this asshole set us up.”

“Kinda evens the score a little.”

Ernie grabbed the bloody pliers, wire cutters, and ice pick from the table.

“Easy for
you
to say.” He hurled the pliers across the room.

Leonard understood his brother’s anger. In Ernie’s third year in the United States Disciplinary Barracks at Fort Leavenworth, several inmates had beaten him to the brink of death for stealing a pack of cigarettes. He’d spent fourteen weeks in the infirmary, the first two in a coma.

The fed stirred in his chair and moaned. Leonard approached and crouched down like a catcher. “You got something more to say?”

Leonard looked at his brother.

“He’s been through enough.” Leonard stepped back, pulled his .45, and took aim. But before he could shoot, Ernie shoved him aside and lit an entire book of matches.

But his brother tossed the matchbook casually as dice at a craps table. The
whoosh
of ignition was chilling.

The burning man leaned his head back and howled.

Leonard raised his pistol again, but Ernie grabbed him and yanked him toward the door.

It was too late anyway. They retreated from the growing inferno out to the Bronco. Leonard got behind the wheel, but Ernie stood in the rain watching the fire until the heat forced him into the cab.

Leonard started to speak, but Ernie cut him off. “You’re wrong,” he said, his eyes glittering with flame. “It’s always about revenge.”

Stretched out in a room of the Crowne Plaza Hotel in San Diego, Nathan Daniel McBride stared at the ceiling. With a sigh, he touched his face where three deep scars reminded him of another time, another world. The longest scar started at his left ear, ran down the side of his face, and ended at the tip of his chin. The next followed a diagonal path from the top of his forehead, across the bridge of his nose, and etched his left cheek. Visibly the worst, the third drew a deep arched line from temple to jaw. Nice touch, that one. At six-foot-five, 240 pounds, he kept himself in top physical condition. His forty-fifth birthday was right around the corner.

He rolled toward the woman beside him. In contrast, Mara had flawless skin. Her kind brown eyes and black hair perfectly complemented an athletic physique. In her mid-twenties, she was nothing short of stunning. But perhaps what he appreciated the most about her was that she rarely broke their silent moments.

“Have I ever really thanked you?”

She slid a leg over his hips. “Thanked me? I should thank you. You’re not like the others.”

The others. It felt like slap in the face. Denial was so self-serving. Mara was a prostitute. He was a john.
One
of her johns, he reminded himself. Sure, they’d seen each other twice a week for the last eight months, but what kind of relationship was that? Empty. Going nowhere. She was so beautiful and he was… What? Did the scars make him ugly? Or something else. Like what he used to do for a living? He wondered how different his life would be if he hadn’t become a Marine. Would he have a wife and children? A home? Not just a roof over his head, but a real home with a sense of purpose and belonging? None of that mattered now. Fresh out of college, he’d joined the Marines and discovered a natural aptitude he’d never known about. He could shoot and it didn’t take the Marines long to identify him. He spent seven years with the Corps as an elite scout sniper before the CIA recruited him.

More than a decade ago, his career abruptly ended after a botched mission. He’d fallen into the hands of a sadistic interrogator and endured three weeks of pure torment. His Nicaraguan interrogator had carved him like Thanksgiving turkey. An inch apart, dozens of crisscrossing scars marred his torso, making him look like a human wicker basket. At the end, his interrogator crucified him in a tight vertical cage that forced him to stand. After four days and nights on his feet with no food or water, the pain in his legs had been literally blinding. He’d been hammered from infection and fever, drifting in and out of consciousness.

“You were gone again.”

She traced one of the grooves on his chest with a forefinger.

“You’ve never asked me that before.” She smiled, but it didn’t reach her eyes. “I can’t meet you Friday.”

“Shh… It’s okay. I have another meeting. Some drug company bigwig. Karen set it up.”

She touched his lips. “You’re so generous to me. It’s not the money.”

“You could work at my security company. I can get you an apartment. You don’t have to do this. It’s dangerous.”

His cell interrupted them. He reached over to the nightstand.

“I’ll be there in seven minutes. Can you make it out to the patio?”

Two minutes later he was striding through the hotel’s lobby with Mara in tow. Once outside the automatic glass doors, he sprinted over to his Mustang. Mara’s heels clicked on the concrete as she hurried to keep up.

After turning west onto Hotel Circle North, he accelerated to fifty. Mara fastened her seat belt as he swerved into the oncoming lane to pass an SUV.

“I thought it was over with that guy.”

“Apparently he didn’t understand my warning.”

“Give him a stronger warning.”

He ran the red light and smoked the tires merging onto I-8. Within ten seconds he was doing eighty miles an hour as he screamed under the Morena Boulevard overpass. He followed a minivan down the I-5 north on-ramp before punching his Mustang up to 110 miles an hour.

Four minutes had passed since Karen’s call. A lot could happen in four minutes. He forced the thought aside and concentrated on driving. His phone rang. Seeing his business partner’s name on the screen, he answered it. A call this late at night raised concern. “Are you okay?”

Nathan felt additional pressure because Karen called him, not the police. She could’ve dialed 911. He suspected the police knew about her escort service, but her women were high-class and low-key. Karen’s women weren’t hookers who trolled for twenty-dollar tricks to feed meth or heroin habits. They were escorts, sophisticated corporate types. Expensive. Besides, her operation was small and no one had blown the whistle. Karen had also called Nathan because of his relationship with Mara. He looked out for her and the other women. Several years ago, he’d personally installed a high-tech security system in Karen’s house.

Nathan looked at his watch as he exited the freeway. Six minutes. Too damned long.

After slowing for a stop sign, he accelerated to sixty miles an hour.

An orange cat darted out from the left. It skidded to a stop in the middle of the street and froze. Shimmering in the headlights, its bluish-green eyes looked like tiny flashlights. Nathan executed a smooth adjustment of the wheel to the right and hugged the curb.

Mara whipped her head around. “No. It’s still there.”

Nathan eased away from the curb and braked hard for the next turn. Half a minute later, he parked fifty yards north of Karen’s place and left the engine idling. It needed a cool down after being worked so hard.

“Stay here. Turn the engine off after a couple of minutes.” He reached across Mara,  popped the glove box, and grabbed his Sig Sauer P-226 9-millimeter. Climbing out, he jacked a hollow-point round into the chamber and lowered the hammer, using the pistol’s de-cocking lever. He tucked the weapon into his blue jeans at the small of his back and sprinted up the sidewalk. Several houses distant, a dog barked three times, then went silent. Beneath orange cones of streetlight, chest-high recycle bins were stationed in the street like sentries.

An off-road pickup sat in Karen’s driveway. It was hyped with oversized tires and augmented with floodlights mounted on a roll bar above the cab. Nathan shook his head. Everything oversized and out of control, just like its owner. He paused in Karen’s yard and listened, then placed an ear against a dark window. No music. No sounds of a struggle. Nothing.

JR by HP
The Rogue’s Prize by Katherine Bone
Darklands by Nancy Holzner
Operation Family by Dobson, Marissa
Alpha Fighter by Ava Ashley
Spies of the Balkans by Alan Furst
A Very Private Celebrity by Hugh Purcell
Saga of Shadows 1: The Dark Between the Stars by Kevin J. Anderson
Come August, Come Freedom by Gigi Amateau
The Boyfriend by Perry, Thomas
Our partner