BOOK: Firsts
5.26Mb size Format: txt, pdf, ePub
Read Book Download Book
ads
Dental Floss
In his 1819 book
A Practical Guide to the Management of the Teeth,
American dentist Dr. Levi Spear Parmly discussed the first form of dental floss. Parmly described his invention, a homemade waxed string, as “The waxed silken thread, which, though simple, is to be passed through the interstices of the teeth, between their necks and the arches of the gum, to dislodge that irritating matter which no brush can remove, and which is the real source of disease.” He also stated his belief that “a thread passed between the teeth after every meal will save more teeth from decay than all the brushes and powders that can be used where the waxed thread is neglected.” Parmly sold his dental floss to his patients and to other dentists.
Dental Record of Forensic Evidence
In 49 B.C.E., the earliest-known example of forensic dentistry, the identification of human remains using dental evidence, involved Agrippina, the mother of Roman emperor Nero. Agrippina had ordered the death of her rival, Lollia Paulina, who was in competition with her to be the wife of Emperor Claudius. After Paulina’s death, Agrippina demanded to see her head as proof of death. Agrippina wasn’t sure her rival was dead until she identified Paulina’s distinctively discolored front teeth.
Because teeth and dental structures may survive post mortem, identification by dental records is a reliable method still in use today. The procedure really began to take hold in 1924 and afterward, when August Vollmer, then chief of police in Los Angeles, California, implemented the first U.S. police crime laboratory.
Deodorant Soap
In 1894, Lifebuoy Royal Disinfectant Soap was launched in the United Kingdom. The soap was red, same as it is today. The name was later changed to Red Lifebuoy Deodorant Soap with the directions: “Add water to produce lather. Use as regular soap.” Its popularity was the result of people beginning to seek out ways to improve their personal hygiene. Lifebuoy’s advertising campaigns were also the first to use the phrase “body odor.”
Detective Story
On April 20, 1841, the first detective story,
The Murders in the Rue Morgue,
was published. Written by American author Edgar Allen Poe, it featured the first fictional detective, Monsieur C. Auguste Dupin. The tale is narrated by the detective’s roommate and is about Dupin’s extraordinary ability to solve a series of murders in Paris. Through this first detective story, Poe introduced the concept of applying reason to crime solving to literature.
Dialysis Machine
In 1943, Dutch physician Willem J. Kolff invented the first practical artificial kidney dialysis machine called the Kolff Rotating Drum. Developed during World War II, the device used a 20-meter-long tube of cellophane casing as a dialyzing membrane. The tube was wrapped around a slatted wooden drum that was powered by an electric motor. As the drum revolved in a tank with dialyzing solution, the patient’s blood was drawn through the cellophane tubing. This semipermeable membrane allowed for the toxins in the blood to be removed and diffused into the dialyzing solution. The cleansed blood was then returned via the circuit back into the body. These first dialysis procedures took around 6 hours to complete.
Dice
From around 3000 B.C.E., the first dice were used for fortune-telling, in religious divination ceremonies, for gaming, and for gambling. They were crudely made from the ankle bones, often called knucklebones, of sheep, llama, buffalo, and other hoofed animals. Some of the dice’s sides contained markings, a precursor to numbering. The playing of dice games probably originated in Egypt, where marked cubes have been found in ancient tombs. Some of these first dice were even altered for cheating.
Dicing,
as it was called, was a popular game. Dice were particularly significant to the ancients because gambling was an integral part of society. 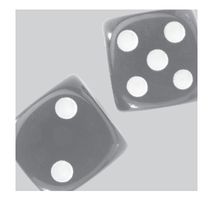 INVISIBLE PRISON (INVISIBLE RECRUITS) by Buckham, Mary
Fixation (Magnetic Desires Book 3) by Murphy, Misti
Gently with the Innocents by Alan Hunter
Sons and Daughters of Ease and Plenty by Ausubel, Ramona
Unknown by Unknown
Dragon Gate by Gary Jonas
Twiggy by Andrew Burrell
A Murder of Taste: A Queen Bees Quilt Mystery by Sally Goldenbaum
The Perfect Crime by Les Edgerton
The Hanging Garden by Patrick White
Our partner