BOOK: Firsts
9.36Mb size Format: txt, pdf, ePub
Read Book Download Book
ads
Brick
The first known bricks date to 7500 B.C.E. early Mesopotamia and were made from sun-dried clay mud in the Upper Tigris area of southeastern Turkey. Clay from deposits around the Tigris and Euphrates rivers was mixed with straw, shaped into individual bricklike units, and sun-dried (similar to the way kids make mud pies). These first mud bricks did not stand up to the tough weather conditions and were in constant need of repair when used to construct primitive shelter. The first fired (cooked or heated) bricks were produced in the third millennium B.C.E. in Neolithic Jericho and were a much better product. The fired bricks meant more permanent buildings could be constructed in areas with high rainfall or with cold or very hot weather. 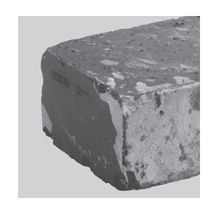 All My Friends Are Superheroes by Andrew Kaufman
Houseboat Girl by Lois Lenski
Hand of the Black City by Bryce O'Connor
The Snack Thief by Andrea Camilleri
In the Forest by Edna O'Brien
Sanctuary by Joshua Ingle
The Papers of Tony Veitch by William McIlvanney
Witch Is Why The Laughter Stopped (A Witch P.I. Mystery Book 14) by Adele Abbott
Fetching Charlotte Rose by Amelia Smarts
Latinalicious: The South America Diaries by Becky Wicks
Our partner