Fixated On You (Torn Series #5) 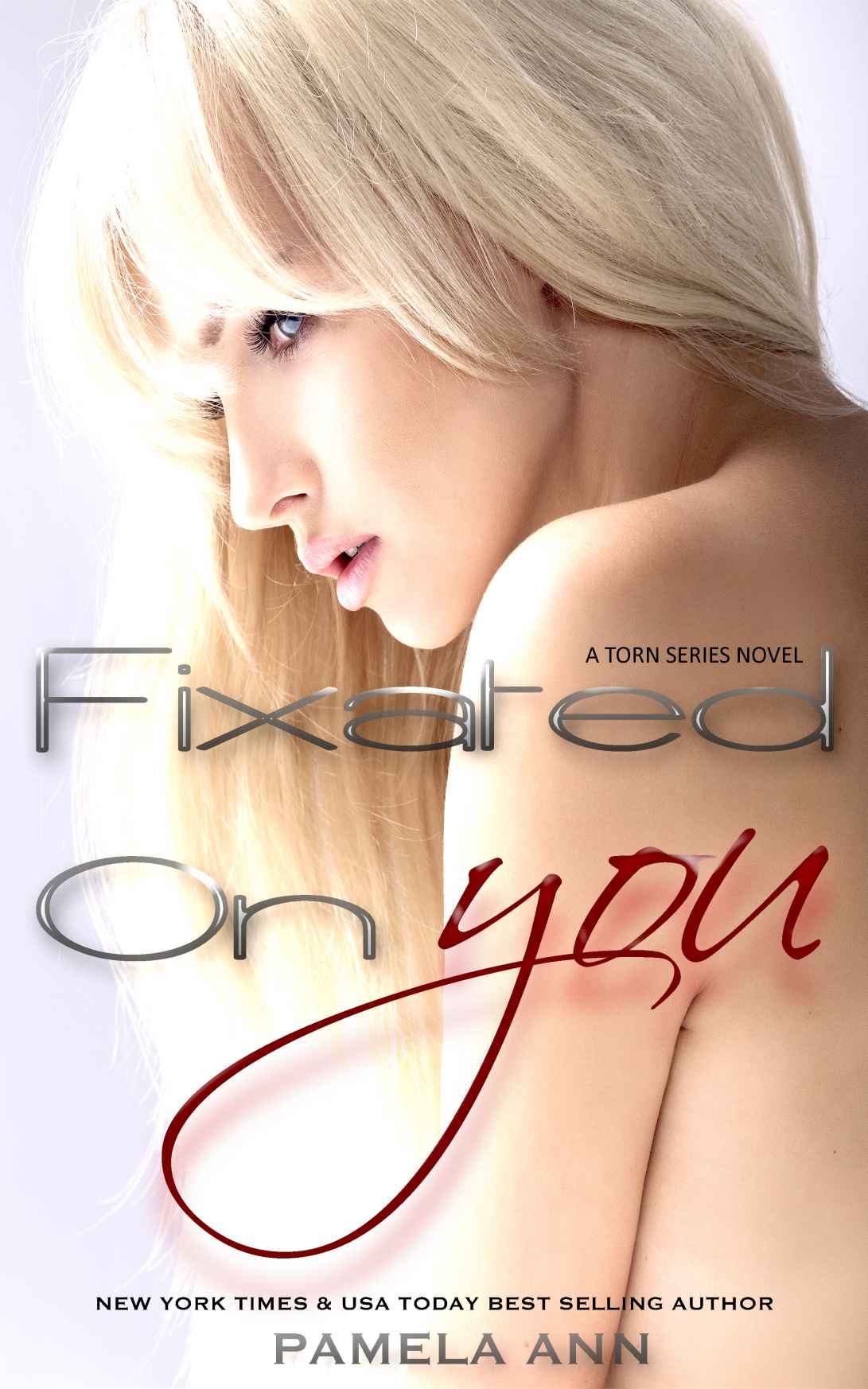 No part of this book may be reproduced or transmitted in any form or by any means, electronic or mechanical, including photocopying, recording or by any information storage and retrieval system, without a written permission from the author, except for the inclusion of brief quotations in a review.

Writing Emma’s book was more difficult than expected. I suppose, saying goodbye to my loves was never going to be easy…

Let It Be Me
Ray LaMontagne

Up To You
Chris Brown

Can’t Take My Eyes Off You
Lauryn Hill

What Goes Around Comes Around
Justin Timberlake

Not Over You
Gavin DeGraw

Pictures Of You
The Cure

Out of lemon flowers

on
the moonlight, love's

the
lemons move down

from
the tree's planetarium

The harbors are big with it-

for
the light and the

and
a clotting of acids

so
the freshness lives on

in
the sweet-smelling house of the rind,

the
proportions, arcane and acerb.

alcoves
unguessed by the eye that open acidulous glass

to
the light; topazes

So, while the hand

holds
the cut of the lemon,

the
gold of the universe

a
breast and a nipple

a
flashing made fruitage,

the
diminutive fire of a planet.

I thought the greatest hurdle of love had already happened, but it wasn’t done yet.
No, far from it.

You see
, my heart had led me to loving two men. As much as I wanted to keep both, I had to choose one,
the one I couldn’t live without
.

I never had been a fickle woman, nor did I strive to be one—but Carter Mason happened, then Bass Cole came along right after. Both men were passionate, relentless, stubborn, and did not easily give up on anything they loved.

Bass, on the other hand, made me feel things. Emotions
that were so profound that I simply ached with or without him. Yet even with the intensity we both shared, he still managed to break me—killed me—and turned me inside out.

For months, I was traumatized. My heart was endlessly battered. I was still reeling and healing from all the pain and abuse before another blow hit me. The news simply terrified me. The worst was yet to come. However, no matter what happens, no matter what they say, Bass held me like no other man could. He made me feel like flying; soaring through air, lit up like fireworks. The Aurora Borealis—multicolored and shining in the sky—was how he made me feel inside—glowing, burning, shimmering with love. Ignited with passion so intense, we crackled with it after just a mere gaze. He weaved me into his
heart, cast a luminous spell that had me bound, and hopelessly captured my heart by loving me without fear. There was nowhere to run except into his arms.

I was his breath of life, and he was the only man that could make me feel all hot and all cold in a flash… Yet even then, one should always ask oneself,
how strong was this love?

The test of will has yet to knock on my door. I knew, with every fiber in me, that it was one trial that was going to bend and break me. It could even kill me.

Would I choose to stay and fight, endure all the pain that it would bring, or would I walk away, admitting defeat.

I was fidgeting with my seatbelt when the pilot’s voice spoke through the speakers, announcing that we were about to land. My silly grin was in place; I simply couldn’t hold it back. Excitement coursed through me as I thought of seeing Bass very soon.

This visit was planned, but what he didn’t know was that I was coming in a day early. Bass was out in Vancouver filming the last KOC movie, and I hadn’t seen him in two weeks.

To some, fourteen days might not be that much time apart, but to us, it had been a big struggle. Each night, we fell asleep on the phone together. We were inseparable even if we were in different countries.

The best thing about getting back with Bass was falling in love with him all over again. Tomorrow we were hitting the two-month mark since our reconciliation and things were almost perfect… almost; if you didn’t include Nikki in the picture.

Thinking about her was depressing. I could feel my mood dip at the thought of what she represented in my life, so I had to shove thoughts of her aside and focus on what I came here for, Bass.

Deplaned and approximately an hour and a half later, I arrived on set. The best thing about being his known girlfriend was that I didn’t have to introduce myself. People already recognized me. So when an assistant named Mark showed me where to go, I kindly told him that I could easily find it without him following me.

It might sound lame, however I wanted this moment to be shared by us,
without an audience
, if I could help it.

From afar, I could see that they had just finished shooting a scene. Everyone was moving around, chaotic and buzzing to get things going for what was next.

I finally spotted him with people. From the looks of it, he was giving a short, informal interview, probably from one of the celebrity gossip news shows that went on everyday right about dinnertime.

The man was Bass Cole. He looked every bit of the sought after actor that everyone wanted to work with. He could do drama, romantic comedy,
action—anything—basically he checked all of the above. Recently, he was dubbed as the next Leo DiCaprio—acting wise. A major feat for any actor in the industry.

Yes, he was gorgeous to look at, even more so when he was
all naked, hot and making love to me. I loved seeing the dark intensity those eyes showed each time he took me. He might be
The Bass Cole
to the rest of the world, but to me, he was simply Bass, the man who loved me unconditionally.

At that moment in the interview, it looked like he was asking a question when something must’ve caught Bass’s attention, causing his eyes to scour the crowd,
looking
for someone. He responded with a smile, but managed to look confused as he tried to search for someone… still.

Who was he looking for? Now my curiosity was beyond piqued. My confidence started to nosedive when I began to think about Bass hooking up with someone on the set. I mean it was possible…

I was nervously biting my lips, hoping for the feeling to ebb away as I waited for his interview to be over with when his eyes roved towards my end, still searching. It was then when he found me. Our eyes locked on each other. I started to become nervous when I saw the burning intensity of his gaze, giving me massive heart contractions.

Then he smiled
. With his eyes still locked on mine, barely glancing towards the interviewer to excuse himself before he came running towards me. Yes, the damning man
ran
while I stayed rooted to the spot, bubbling with excitement and happiness, before he picked me up in his arms and kissed me for the world to see.

Both of my hands cupped his face, kissing him with the same fire and hunger that took over our bodies. I was almost in tears because the kiss held so much meaning; damn, it was scary to hold this kind of happiness because the last time I felt this way was in Aspasia before the tsunami of bad luck came crumbling down on us.

When I pulled away, we were both panting loudly as we grinned at each other. “Surprised?”

His eyes held me mesmerized. “You have no idea how glad I am that you’re here.” He held my hand and kissed it softly before tucking it close to him.

“Why don’t you finish up with that guy and I’ll just wait in your trailer? Or I can head straight to your hotel room and unwind for a little bit?” I suggested, feeling a little guilty for interrupting him mid-interview.

He shook his head, gazing at me as if he couldn’t get enough of seeing me up close. “No, I’d rather you stick around.” Bass grinned, pulling me close to his chest. “I want you to meet the people I work with. We’re all going to a restaurant afterwards for dinner. Hope that’s okay?”