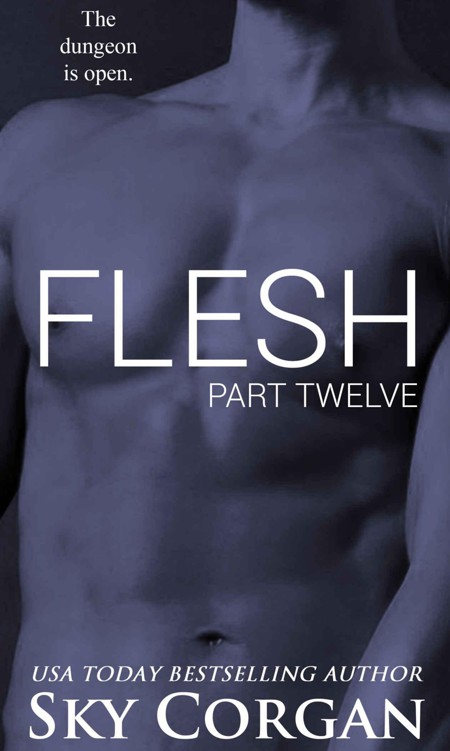 No part of this
publication may be reproduced, stored in a retrieval system, or
transmitted in any form or by any means, electronic, mechanical,
photocopying, recording, or otherwise, without written permission of
the author.

My heart is heavy as
I sit in my apartment waiting for Lucian. I've been leaning against
the back of the sofa, staring at the door for the past twenty
minutes. Not so much staring at it as looking through it, not seeing
it, my mind somewhere else.
Mistake
, it keeps saying. I should
not have given him this chance. Nothing good will come from it.

I wish that Janice
was home so that I could talk to her, but I already know what she
would say. She'd try to convince me not to go out with him. She'd
tell me everything that I'm already thinking. Lucian Reddick is bad
for me. He's like a disease to my heart, slowly chipping away at my
soul until he destroys me completely.

I shouldn't have
felt sorry for him. I shouldn't have felt the slightest twinge of
sympathy for his situation. People have bad things happen to them all
the time—horrible things. Every day someone in the world loses
someone important to them. People die, they get murdered, they have
accidents. Those who are left behind choose how to deal with that
loss. Most cope well enough. Then there are those like Lucian. Those
who lose themselves because something inside of them was already
broken, the part that understands how to properly cope with loss.

I sigh. Perhaps I'm
judging him too harshly. Maybe I'm just being bitter because his
coping mechanism has hurt me over and over again. I've been a victim
of him being a victim of circumstance. It's not fair, but life often
isn't.

And now I'm standing
here, preparing to subject myself to more of the same treatment.
Actions speak louder than words, and I honestly don't have much faith
that he can change. This was never what I wanted, a man like him. But
I was never what he wanted either, from the way he spoke about us at
Flesh. Oil and water. Water and oil. You can stir them together until
your hand cramps, but the two will never mix. Maybe I should call and
cancel our date. Would he answer his phone then?

Just as I think it,
there's a knock on the door. My heart leaps into my throat, and I
push myself off of the sofa, quickly smoothing my skirt before taking
long strides towards the door. I didn't even bother changing out of
what I was wearing earlier today. I don't care if he plans to take me
to the nicest restaurant in town, I want him to see that my interest
in him is practically dead. The part of me that cared about him is
drying up faster than a puddle on a hot day.

I grit my teeth,
unpleasant tightness assaulting my chest as I open the door. A
bouquet of daisies is thrust into my face, and I scoff before my eyes
land on the face delivering them. The tightness in my chest triples,
and tremors of panic assault me.

He's wearing an
Armani suit and a smile.

“
Hey,
Sugartits.” He pushes the flowers into my arms and then
welcomes himself into my apartment.

I stand there with
my mouth agape, trying to process what's going on. Lucian will be
here anytime now. This is not good.

“
D-Derrick,”
I stumble over his name, quickly shutting the door behind him and
pressing my back against it. “What a surprise.”

“
A
good one, I hope.” He glances over his shoulder at me before
going to the kitchen to rummage under the sink for a vase. He knows
my apartment so well that I'd be amused if I weren't absolutely
horrified that he and Lucian will probably be crossing paths again
very shortly at the worst of times.

“
Your
timing sucks so bad.” I exhale deeply, trying to push some of
the stress out with my breath though it doesn't work.

“
I
just wanted to apologize for the way I've been acting lately. It was
totally unnecessary. Consider this a peace offering.” He
gestures for me to bring the flowers over.

It takes everything
in me to push myself away from the door. For some reason, I feel like
as soon as I walk away from it, Lucian will knock, and then this
pleasant exchange will turn into a nightmare all over again.

“
You
shouldn't have.” I hand him the flowers. And boy do I mean it.
While I'm happy to see him, I'd be leagues happier if it were any
other time but now.

“
I
didn't feel like an apology was good enough.” He pulls a pair
of scissors out of one of the drawers and starts clipping the stems
of the flowers before pulling the rubber band off of the bouquet and
sticking them in the vase to begin arranging them.

“
I'm
sorry too.” I lean against the counter, suddenly feeling guilty
for wanting to shoo him away. Seeing him like this, the old Derrick
that I've always had friendly affection for, I realize just how much
I've missed him. Now I really wish I could cancel on Lucian. Maybe
it's not too late. “Can you give me a minute?” I make a
one with my finger, then turn from him to pull my phone out of my
purse.

My hand is shaking
as I quickly type out a text message to Lucian. “I'm sorry,
Lucian. I've changed my mind. I really don't think that the two of us
are a good idea. It was—”

My shoulders
practically cramp with tension when I hear the metal knocker clanging
against the door. I gasp as my phone falls from my hand and busts
apart when it hits the floor, the battery compartment and battery
going one way and the phone itself going another. I bend over to
retrieve the pieces only seconds before Derrick flashes by my
peripheral vision. I don't think I've ever straightened myself
faster, but by the time I reach Derrick, it's too late. He pulls the
door open and is met by an older gentleman in a driver's outfit. It's
the same guy who watched Lucian and I have sex in the limo.

The chauffeur looks
at Derrick, then over Derrick's shoulder at me. “Miss
Underwood, Doctor Reddick is waiting for you downstairs.”

I can almost feel
the heat coming off of Derrick's back. I know that he's pissed. Why
wouldn't he be? I chose Lucian over him. Not this time though.

“
Tell
Doctor Reddick that I've changed my mind,” I say in my most
assertive tone. “I won't be having dinner with him tonight, or
any other night, for that matter.”

“
Amy,
you don't have to.” Derrick turns to me, and I can tell he
feels like an inconvenience. I can also see the glimmer of hurt
behind his eyes.

“
No.
This is the right thing to do.” I nod as if I'm trying to
convince myself.

The lines in the
driver's face deepen. Looking at him now, he seems to be in his late
fifties. The hair peeking out from beneath his blue chauffeur’s
hat is salt and pepper, though mostly salt. His eyes are a light
brown, but they look worn and tired. I can tell by his expression
that he's not excited about giving Lucian the news.

“
I'd
rather spend my afternoon with him.” I wrap my hands gently
around Derrick's arm, proud of myself for making this decision, even
though I know it will hurt later. For now, I just want to bask in the
glow of my repaired friendship with Derrick.

Lucian's chauffeur
says nothing, he merely nods and starts walking back to the limo. I
close the door softly behind him and sigh, glad that I was finally
able to end that chapter of my life. Lucian is wrong for me, and I've
never realized it more than when thinking about everything that I
almost lost because of him.

“
Trouble
in paradise already?” Derrick returns to tending to the daises,
fidgeting with them for a few more seconds before he sticks the vase
under the faucet to fill it with water. The sarcasm in his voice is
so familiar that I can't help but smile.

“
Paradise
is a stretch. I don't think there ever wasn't trouble.” I go
back to leaning against the counter, watching him as if I haven't
seen him in years.

“
He's
very pretty, Amy. I seriously can't blame you for falling for his
bullshit.” He tears open the packet of plant food that came
with the flowers and pours it in the vase.

“
Pretty
much an asshole,” I grumble.

An almost
unexplainable sensation rolls down my spine. It's like there's a fuse
running from the top of my neck to my tailbone, and the knowledge
that that knock did not belong to the chauffeur has lit it and sent
sparks flowing down my body at record speed. I'm not sure if I'm more
tense or more angry that Lucian just won't give up. At least I have a
safety net this time. With Derrick here, Lucian wouldn't dare advance
on me and play his seduction games.

“
One
second.” I gesture to Derrick, my lips tight and my eyes wide
to show him that I'm not pleased with this intrusion.

I walk to the door
and pull it open, my eyes instantly landing on a gorgeous bouquet of
roses. Not just roses, but diamond studded roses. Light glitters off
of them like Lucian pulled the stars from the heavens and adorned
them. It is, by far, the most beautiful and expensive bouquet of
roses I have ever seen. I try to stifle a gasp, but it's too late.
Then my eyes drift up to the face of the man delivering them.

Lucian looks
absolutely stunning. A picture of modelesque perfection in a classic
black suit and tie every bit as expensive as the one Derrick is
wearing, if not more so. He's dressed like a million dollars, smells
intoxicatingly delicious, and the way that the dim outside lighting
makes his hair darker, his skin paler, and his eyes bluer is enough
to awaken everything in me that I know I shouldn't be feeling. Lust
to feel him inside of me again. The desire for him to belong to me
and only me. Regret for ever thinking of rejecting him.

“
Lucian,”
I say his name as if I hadn't expected to see him.

Oh God, I can't
fall into this again. Derrick is here. I have to prove that I don't
want Lucian anymore.

It quickly becomes a
personal challenge.

“
How
nice of you to come all the way up here instead of sending your
chauffeur.” I try to sound as callous as possible.

“
I
wanted to see your apartment.” He gives me a panty melting
smile. It works ten times better when he looks like...a freakin' sex
God.

“
You're
such a liar.” I turn away from him, more to escape that smile
that's making my heart beat a thousand miles per hour than anything
else. I hope it seems like a rejection since I didn't take the roses.

Crap, he let himself
in. What is with these guys just barging into my apartment.

I spin back around
to see Derrick glaring daggers at Lucian. He absentmindedly tugs at
the flowers in the vase, pretending like he's still rearranging them.
Then his eyes fall to the bouquet in Lucian's hand, and his scowl
deepens. I know exactly what he's thinking, that Lucian outdid him,
and it makes me feel horrible. I love both of their bouquets equally.
Derrick's even more because I know it came from the heart, not from
his need to impress me with something lavish. He knows I'm not that
kind of girl.