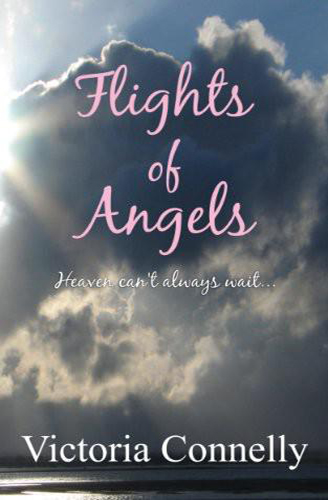 Table of Contents
Flights of Angels

The characters and events portrayed in this book are fictitious. Any resemblance to actual persons, living or dead, is entirely coincidental.

Victoria Connelly asserts the moral right to be identified as the author of this work.

in association with Notting Hill Press

To Roy with love

It’s a well-known fact that brides don’t look good in black. But newly-weds look even worse, and Claudie Gale was no exception. Her skin was porcelain-white against the ebony of her dress as she sat shivering in the tiny church. The very church she’d got married in just six weeks before. She could almost smell the flowers; almost feel the warmth of the June sun filtering through the stained glass windows. Almost, but not quite. It wasn’t quite there because
she
wasn’t quite there either. She felt suspended from her body as if a puppeteer had attached strings to her and was hovering somewhere up in the church rafters.

She knew she’d promised till death us do part, but she hadn’t reckoned on the death part coming round so quickly. It all felt so incomplete, like an unfinished conversation, or the curtain falling five minutes into a play.

She could remember their last conversation at the train station so clearly. She’d insisted on seeing him off. It was what newly-weds did, wasn’t it? Like lovingly smiling when you’re picking up socks off the bedroom floor, or putting down the toilet seat for the fourth time that day. It soon wore off, she’d been warned, but she’d insisted on basking in it whilst it lasted.

‘Do you
have
to go?’ she’d complained, her finger making tiny circles in his great, thick palm.

‘Claudie, it was arranged months ago. You knew that when we booked the wedding. I can’t let the lads down now, can I?’

‘I know,’ she’d lied, desperately wanting to be selfish and keep him all to herself for a little while longer. ‘But it’s so dangerous.’

Luke had smiled down at her, his intense blue eyes twinkling mischievously. ‘It’s no more dangerous than crossing the road,’ he’d told her before giving her a kiss which had set her toes on fire.

‘You will take care?’ she said.

‘You know I will. And you will too? There are a lot of roads round here.’

She’d smiled and thumped him in the belly, an d then he’d given her one of his crushing bear-hugs which flattened her nose and squashed her chin. She remembered how she’d protested the first time he’d hugged her like that.

She’d watched him hop onto the train, wielding his mammoth rucksack as if it were a mere wisp of material. They’d blown kisses and waved as the train pulled out, and Claudie had stood on the platform, like a character from a 1940’s movie, watching as her husband turned into a funny little dot on the horizon.

It wasn’t simply the fact that she’d never see him again which upset her, but that
he’d
never see
her
or anything else ever again. For Luke, the world had stopped on the twenty-first of July. No more songs would be sung; no more books would be written. On the twenty-first of July, the world had become complete for him: no additions, no evolutions. And Claudie couldn’t bear that.

Life with Luke had been like living in the land of Oz: a perfect Technicolor dream-sequence. But now she was back in Kansas: drab, colourless, and threatened with tornadoes.

What was she going to do without her daily intake of jokes? He’d turned her into a joke junkie. She laughed now as she remembered one of them, blissfully forgetting where she was for a moment.

‘Claudie?’ her mother, who’d flown over from Marseille for both wedding and funeral after not having seen her daughter for four years, sounded sharp and stressed-out.

‘
Claudie
!’ her mother’s manicured hand clasped her arm but it didn’t do any good. She’d slipped out of the world around her, and was miles from anywhere and everybody.

And that’s when the voices had started. All suspended. Were there puppeteer’s strings attached to them too? Claudie looked up into the rafters but it was too dark; she couldn’t see.

‘It’s only to be expected.’

‘She shouldn’t have come.’

‘Just give her time.’

Everything was echoey and dreamlike, and she felt her vision blurring as hot tears spilled from her eyes. It was the joke that was making her cry, wasn’t it? She just couldn’t stop laughing.

And then, all of a sudden, she couldn’t remember what it was that she’d found so funny. What was the punch line? What had he said to her?

She was no longer laughing.

‘How long has it been now?’ Angela asked after swallowing a mouthful of machine-processed coffee.

Kristen puffed out her cheeks and sighed. ‘Well, it once took me nine months to get over an ex-boyfriend.’

‘Blimey! How long had you been going out with him?’

Angela nodded in sympathy and drained her cup, filling it up again. This time, the coffee came out looking like molasses.

‘It’s not natural, is it?’ she said, not noticing the contents of her cup. ‘I mean, he was so young. It just seems so unfair.’

Kristen nodded, looking across at Claudie who was staring vacantly at her PC, her pen hanging out of her mouth as if it were a particularly potent joint. ‘I hardly recognise her these days. She’s just shut herself away.’

‘So what did all those books say? You must have read every one written on the subject by now.’

Kristen sipped her chocolate, licking the undissolved particles from her lips. ‘They’re perfectly useless. One will say one thing, the next: another. I don’t think anybody really knows.’

‘But wasn’t there that emotional equation thing?’

‘That the stronger the love, the longer you grieve?’ Kristen looked at Angela. ‘So, the only way to avoid grief is by not loving.’

Angela shook her head. ‘It’s not natural. How can a person get through life without loving?’

They stood in silence for a moment, drinking and thinking.

‘We’ve got to do something, though, haven’t we?’ Angela began.

‘She’s still seeing that bloke in York. That must be helping,’ Kristen reasoned.

‘How do you know? Are you sure she doesn’t just get on the train and go shopping?’

‘Or just go and sit in the cinema? You know what she’s like with films.’

Kristen knew only too well. There’d been many a Saturday evening when she’d tried to drag an unwilling Claudie away from her collection of MGM musicals and actually leave the house.

‘What
is
she doing with that pen pot?’ Kristen whispered, watching Claudie’s glossy brown bob swinging from side to side as she examined the stationery on her desk. ‘That’s the third time she’s emptied it this morning.’

‘And she’s sorted through her in-tray a dozen times too. She must have lost something.’

Kristen nodded. She’d been afraid of as much for the last nine months.

Claudie looked at the growing pile of work leaning precariously over the edge of her table like a paper version of the Tower of Pisa. She had enough to keep her busy for a week but she just couldn’t muster any enthusiasm.

It was odd but, since that morning, she’d had the strangest sensation that she was being watched. Yes, she knew Kristen and Angela had been talking about her again: they were about as subtle as a sledgehammer, but there was something else. It was almost as if her computer had turned into an enormous eye; a great spying Cyclops on her desk, watching her, recording her, assessing her. It gave her the shivers. She kept having to get up and leave her desk. A bit of filing here, a quick trip to the ladies, a lengthy session at the photocopier. But, as soon as she sat down, the feeling would come back.

She’d soon become paranoid and had started looking round the room, half-expecting to see a hidden camera, as if she were the unwilling guinea pig on a new television programme. But everything seemed normal; depressingly so.

Then there was the other problem. She kept losing things. Yesterday, it had been her calculator, today her silver Parker pen. She was sure she’d left it by her keyboard, but it wasn’t there any more. Was she going mad? It was very probable. She really couldn’t trust herself with anything at the moment.

And then it had happened. From the corner of her eye, she saw something move: quick and fluid as a fish. She turned round and blinked, but whatever it was had gone. She shook her head and smiled. She knew what her problem was. She needed a dose of caffeine.

Still, as she wondered whether to have weak-as-rainwater tea or thick-as-quicksand chocolate, she couldn’t get it out of her head. For a moment, she’d sincerely believed she’d seen a tiny person diving into her pen pot.

Claudie wondered if Dr Lynton would believe her. She always enjoyed the sessions she had with him. There was an unexpected cosiness about being somebody’s focus of attention for a whole hour, but was it doing her any good? She’d been going for several weeks now, and still wasn’t sure that she was making enough progress. Still, it kept her best friend, Kristen, off her back. Honestly, she could be worse than a mother at times and, with Claudie’s mother, that was saying something.

Claudie had never been close to her mother. At the age of eight, she’d put her on a plane from Marseille under the pretence of wanting her daughter to have an English education, but it really had been to enable her to divorce Claudie’s father and set up home with the toy boy milliner Claudie detested. It had been his idea in the first place, Claudie had later found out. He’d had a cousin who lived near the boarding school, and gave it a glowing report, but he was a middle-aged man and would never have to go there.

Claudie had staunchly stood her ground during school holidays back in France, and would have nothing to do with the hat man. No man could buy her with a hat. Not even a feather-festooned,
Gigi
, affair.

It had been an ugly, grey time, and Claudie had never seen her real father again, but at least her mother had had a hat for every occasion. But she never really forgave her for what she did. Eight years was far too young to end up in a gothic grange in the middle of the North Yorkshire Moors, and Claudie had screamed the rafters down every night until her mother had been forced to withdraw her from the school.

‘What
are
we to do with you?’ she’d complained, as if having a child had been nothing to do with her, and bitterly resenting the fact that her daughter was now compromising her life.

Marilyn: A Biography by Norman Mailer
Chosen by Jessica Burkhart
Elemental Air (Paranormal Public Series) by Edwards, Maddy
Ghosts of the Pacific by Philip Roy
The Phoenix Guards by Steven Brust
Birds in Paradise by Dorothy McFalls
Amanda Scott by The Bawdy Bride
Sleep Peacefully by NC Marshall
Love Lies Dreaming by C. S. Forester
Sweet on You by Kate Perry
Our partner