Read Flora's Fury: How a Girl of Spirit and a Red Dog Confound Their Friends, Astound Their Enemies, and Learn the Impo Online

Flora's Fury: How a Girl of Spirit and a Red Dog Confound Their Friends, Astound Their Enemies, and Learn the Impo 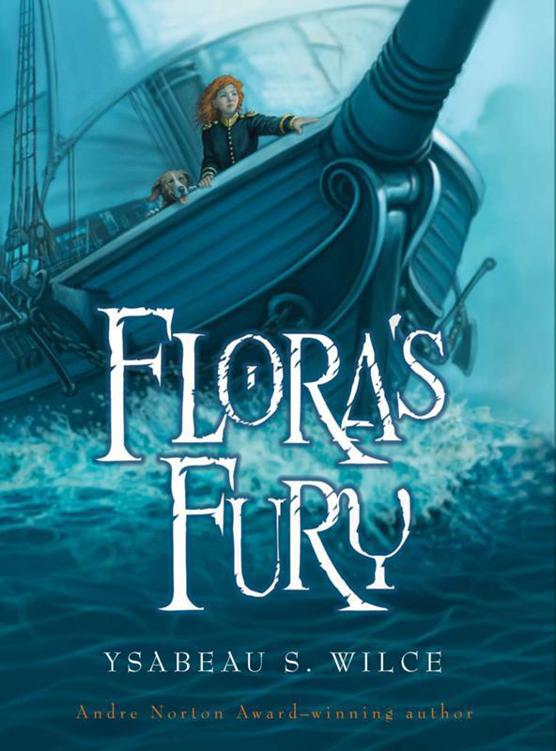 Statement of Intent Magical Working No. 9

What I Learned Last Term

Flora’s fury : how a girl of spirit and a red dog confound their friends, astound their enemies, and learn the importance of packing light / Ysabeau S. Wilce.

To Sieur Stilskin:
Thanks for the lift in
your
balloon
.

The tygers of wrath are wiser
than the horses of instruction.

Statement of Intent Magical Working No. 9

Everyone thinks the Birdies killed you, sacrificed you to one of their gods, whose priests ate your body while he ate your soul. Everyone thinks you are more than just dead, that you’ve been erased from the Waking World and Elsewhere, without a trace of your Anima surviving to cross the Abyss. Even Paimon thinks this.
I am the denizen of Bilskinir House
, he told me.
No member of the Haðraaða family can be unknown to me; if she escaped the Birdies and survived, I would know it. But she didn’t
, he said.
Tezcatlipoca took her and she’s Gone
.

I don’t care what Paimon says, or what he thinks he knows. He might be Bilskinir House’s Butler, but I am the Head of the Family and I know you are still alive. I am your daughter, and I know.

I
know
it. In my heart and my head and my very gut.

And I’m really fiking furious about it.

Never leave a comrade behind
, the great ranger Nini Mo said. Well, you not only left me behind,
Mamma
, but you left me in the lurch.

I’m sure you’d say that you were trying to protect me by getting Buck Fyrdraaca to pass me off as her own child, by getting Buck to lie to me all those years about being my mother. (And by the way—was it really fair to hide this knowledge from Poppy, too? He’s my father. Didn’t he deserve to know who my real mother is? He knows now, but finding out was a terrible shock. And believe me, after all the horrible things Poppy’s been through, he did not need another terrible shock.) I know you were only trying to save me from the Birdies, who would kill me for no other reason than I was your daughter. But did you ever think about what this meant for me?

My entire life—my family, my name, even my birthday—is a lie.

I used to be so sure of myself. I used to know who I was: the youngest child of General Juliet “Buck” Fyrdraaca and her crazy husband, Hotspur. I used to have a home: Crackpot Hall, old and moldering and with a banished Butler, but a home nonetheless.

I used to have dreams: I’d be a ranger, like Nini Mo, stealthy and secret. I’d speak Gramatica, the Language of magick. I’d cross from the Waking World to Elsewhere as easily as crossing the street. I’d be clever, cunning, and shrewd, true to my own Will.

I used to have sand and grit, hope and a future. And now I have nothing. Now I have to skulk around in the shadows, trying to be small and unobtrusive, so our Birdie overlords won’t notice me, won’t discover who I really am.

I can’t even use my real name. You named me Nyana, after the great ranger Nini Mo, but Buck changed my name to Flora, after her daughter who was lost to the Birdies when she was small and perfect. As far as everyone is concerned, I am just Flora Segunda, a pale shadow of the original.

Unless the Birdies catch me. Then I’ll be Nyana Brakespeare ov Haðraaða. (As far as they are concerned, my Fyrdraaca half doesn’t count.) Then the Birdies will take me to Anahautl City. They’ll march me to the top of one of their black obsidian pyramids and rip out my heart with a slick black obsidian knife. Then they’ll eat my heart and feed my Anima to Tezca-whatsit, the Lord of the Smoked Mirror. That will be
punto final
for me, the absolute end. I’ll be done before I even got started.

Needless to say, I’m not so keen on that.

So, to avoid exactly that, I’ve spent the last eight months being anonymous. I’ve pretended to be a good little Fyrdraaca and have done everything a good little Fyrdraaca is expected to do. Like a good little Fyrdraaca, I went to Benica Barracks Military Academy There, I was a good little cadet. I shined my shoes and dug latrines, calculated trajectories and marched eight miles with a fully loaded pack and an empty canteen. When, thanks to the Infanta Sylvanna, I was detached from the Barracks and sent to work in Buck’s office as her junior aide-de-camp, I went with a smile, happy to settle in to a prison of paperwork. Now I spend all day copying reports and going to meetings and reviews and inspections and briefings, and baby-sitting Pow. If the Birdies don’t get me, this will be the rest of my life.

Also,
Mamma
dear, I’d like to point out, it’s not just me that you left in the lurch, but the entire Republic of Califa. Thanks to you, the war was lost. Thanks to you, the Birdies own us now. We are their lap dogs. The Infanta Sylvanna has lived with the Birdies most of her life. Basically, she
is
a Birdie. The Warlord is old and on his last legs. Once the Infanta is in charge, Califa will become a Birdie State. There’ll be no chance for me to be free, and no chance for anyone else, either.

If Nini Mo were alive today she would not stand by idly as Califa is sucked ever deeper into lap-doggery as we bow our heads ever lower to the Birdie yoke.
Free the oppressed!
Is that not the Ranger Motto? Nini Mo would never live as a slave, subject to another. She would be working tirelessly to overthrow Califa’s Birdie overlords; she would do everything she could to undermine them.

Well, I can’t start a revolution, Tiny Doom, but you could.

I know you weren’t very popular when you were alive—hence the Butcher nickname—but now that everyone thinks you are dead, they love you. Azota, they call you now, the Whip, and they mean it as a compliment. They scrawl
cierra azota!
on public buildings and sing heroic ballads about you—“Lo’ She Wields Her Mighty Goad” is particularly popular right now—and wear shocking-pink ribbands in your honor. They make offerings to you and name their children after you. Somehow, I don’t know exactly how or why, you have become a symbol of freedom.

But if you came back, you’d be more than a symbol; you’d be a leader. The people would flock to you, would rise up and kick the Birdies square in the teeth, right out of Califa. Califa would be free. I would be free. You owe us this freedom. It’s your fault the war was lost to begin with. It’s time for you to come back and make amends.

So where the fike are you?

The Waking World is a vast place. There are many places to hide: The Kulani Islands, Bexar, Espada, Ketchikan, Varanger, Porkopolis. How do you track someone whose tracks are fifteen years old? Who left those tracks a thousand miles away? Who hundreds of people saw die—
thought
they saw die. Who is able to hide from the denizen of her own house?

Oh, I know that wherever you are, you think you are well hidden. No one has found you so far, so no one ever will.

We’ll see about that.

How does one cut sign if there isn’t any sign to cut? I’ve been puzzling over this for a long time. Then, on my dinner break a couple of days ago, I noticed one of the other clerks reading
Nini Mo, Coyote Queen vs. the Crab King of Krake Island
. In case you don’t remember, it’s the one where Nini Mo and the Macaroni Kid are trapped in the belly of the Crab King, and Nini Mo charges a drop of her own blood into an Erucate Sigil, which she then uses to blast them both out to freedom. Suddenly the answer was obvious.

Blood calls to blood
, Nini Mo said. It’s the one bond that can never be erased. You can hide from the Birdies, Poppy; the Warlord, anyone. But you can’t hide from me.

All I need is a simple Locative Sigil and a few drops of blood, my blood, which is your blood, too. Blood, and the Will to do the Working. Of course, I have to be super careful not to do anything that might reveal me to the Birdies. Magick being number one on that list. But here’s the clever part. Tomorrow night is Pirates’ Parade, amateur magick night, when the Current is full of snapperheads playing at conjuring, sigils, and fortunetelling. The perfect camouflage. With all the other magickal hijinks going on, no one is going to notice me.

I know a Blood Working won’t be easy. I may be in hiding, and my magickal studies may have been cut short, but I’m not some tyro. I stood up to Lord Axacaya, the City’s greatest adept, when he tried to kill me. I’ve been to the very threshold of the Abyss and back. I helped birth a baby etheric egregore of the ninth order. I’ve parlayed with Springheel Jack and fought a Quetzal. I may not be a real ranger, but I’ve pulled off the Ultimate Ranger Dare. I am confident I can manage it. I have to. It may be my only chance.

I am going to track you down and make you come back to Califa. Not because I’m desperate for maternal affection or looking for some melodramatic reunion. But for Califa’s sake. For my sake, too, but mostly for Califa.

S
O THIS, THEN
, is my Statement of Intent, the what, how, and why of the Working.

What: Calling upon the Sanguinary Link between One Member of a Family to Another, and by Following this Link thus Determining Her Whereabouts.

Resonance by Chris Dolley
Lost Hearts (The Unknowns Motorcycle Club Book 1) by Reid, Ruby
Burning Lamp by Amanda Quick
The Last Execution by Alexander, Jerrie
59 - The Haunted School by R.L. Stine - (ebook by Undead)
Run Around by Brian Freemantle
The Round House by Louise Erdrich
When Men Betray by Webb Hubbell
Spellbound: The Books of Elsewhere by Jacqueline West
The Delilah Complex by Rose, MJ
Our partner