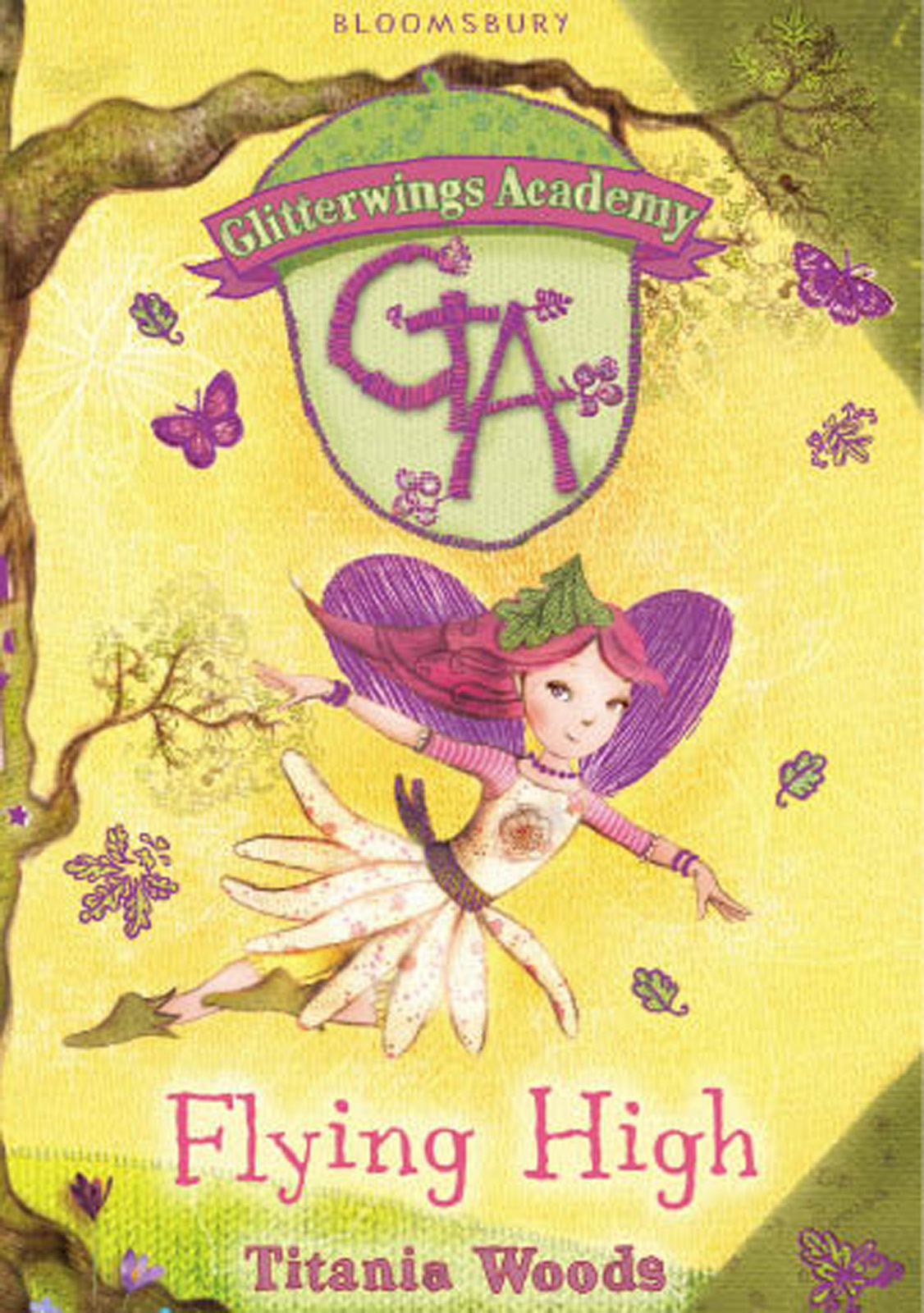 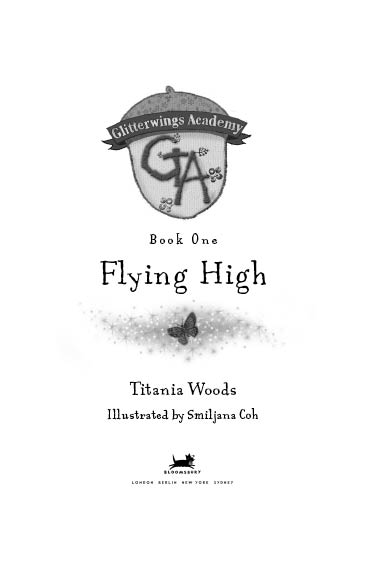 For my agent, Caroline Sheldon.

Without her wonderful support and enthusiasm,

there would be no fairies at Glitterwings. 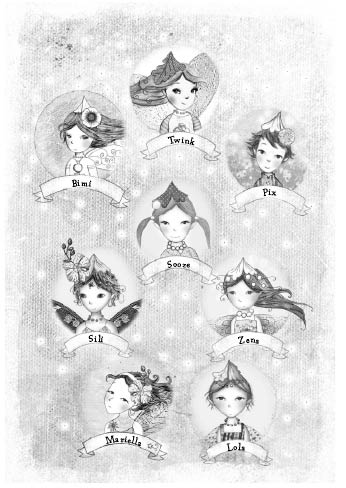 âHurry, Brownie!' whispered Twink in the mouse's ear. âWe're almost there!' Obediently, the mouse broke into a run, his whiskers shaking with every step. Twink clung to the reins. Her heart thumped as she scanned the long grass in front of them. Why couldn't she see her new school yet? They
must
be almost there by now.

And then all at once, there it was! A massive oak tree, rising up from a field of flowers. Fluttering her wings excitedly, Twink tugged at Brownie's reins.

Twink's father swooped over her head, his purple wings beating so fast that they were a blur. âI wondered when you'd see it!' he teased. Hovering beside her, Twink's mother squeezed her hand.

âYou're going to love it here,' she said. Her bright pink hair, so much like Twink's, blew gently in the wind.

âCome on, let's hurry!' cried Twink. She nudged Brownie into a scamper and sped towards the oak tree, her parents flying close behind.

A faint buzzing noise came from the air above them. A crowd of young fairies flew into view, brightly coloured as butterflies. They dipped and swirled in the air, calling to each other.

Twink smiled as she watched them skim off. Soon she'd be flitting about through the air with friends, too. Oh, she could hardly wait to learn to fly!

As Twink and her parents drew nearer, Glitterwings grew taller and taller, stretching up to the sky. âIt's huge!' breathed Twink. She could see hundreds of tiny windows spiralling up the tree's trunk, and a set of double doors sitting at its base.

More and more young fairies appeared, flickering about the tree like Christmas lights. They hovered together in cheerful clusters, laughing and talking. Some of them looked almost grown-up in their sparkly shorts and tank tops.

No one paid the least attention to Twink. She looked down at Brownie's round ears. Suddenly she felt very childish, riding a mouse and wearing a boring dress made of rose petals, without a sparkle in sight. Then Twink saw a lavender-haired fairy her own age on a mouse, wearing a dress made of daisies. Another First Year! She let out a relieved breath.

Hovering just above her, Twink's mother pointed out a branch. âLook, there's Peony Branch! It's where I was when I was your age. We had so much fun there!'

The air rustled as a fairy with white wings and sky-blue hair landed in front of them. âI'm Mrs Lightwing, head of the First Years,' she announced, folding her wings neatly behind her back. âAnd you are?' She squinted at Twink. 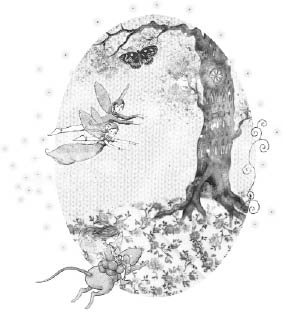 Twink's parents landed too, one on either side of her. They gave her encouraging smiles.

Hastily, Twink slid off Brownie and stood on her tiptoes, dipping her head politely. âI'm Twink Flutterby,' she said.

Mrs Lightwing nodded, ticking off a name on her clover-leaf clipboard. âYes, you're in Daffodil Branch. Oh, and I see you went to Watercress Primary. Well, we'll expect impressive things from you in that case.' She looked sternly at Twink.

Her father laughed. âTwink can hardly wait to learn how to fly. No more mice for her!'

Mrs Lightwing gave Twink a grudging smile. âJust like all the other First Years. Well, I'm the Flight mistress, so I'll be the one teaching you.'

âOh! I mean â that's great.' Twink's heart sank.
Oh, wasps,
she thought. Flying was supposed to be fun. Mrs Lightwing looked like her face would crack if she ever
really
smiled!

Twink's father untied the oak-leaf bag that held her belongings from Brownie's back. âHere you are, Twinkster. Your mum and I will leave now, and let you explore.'

Her mother kissed her cheek. âSend us a butterfly every week, darling. And remember that your father and I will be at the Fairy Medics' Meeting at the end of term. We'll send someone to pick you up and bring you home for the holidays.'

âI'll remember.' Twink's eyes burned as their wings circled her warmly. Both of her parents were Fairy Medics, and Twink was hugely proud of them. She was going to miss them so much! But she wouldn't cry. Crying was as babyish as riding mice.

Then she felt guilty and gave Brownie a quick hug, wrapping her arms around his soft fur. It wasn't
his
fault that only baby fairies rode mice!

After a final squeeze, her parents flew away, waving over their shoulders. Brownie trotted along below them attached by a long cord.

âTell Teena that I'll write to her, too,' Twink called after them. Teena, her little sister, was extremely impressed that Twink had gone to Glitterwings Academy to school. Twink smiled as she thought of Teena, and lifted her chin, determined to enjoy herself.

âRight, let's get you sorted,' said Mrs Lightwing. She steered Twink towards the ornate front door. Twink's wings rubbed together as she gazed up at the spreading branches. What would Glitterwings be like inside?
. 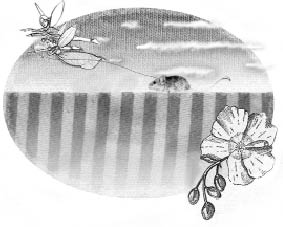 âHere's another of our first-year fairies.' Mrs Lightwing beckoned to a fairy with long lavender hair. âShe's in Daffodil Branch, too.'

The fairy came running up, and Twink recognised the other mouse-rider she had seen earlier. The two girls smiled at each other as Mrs Lightwing introduced them. She was called Sooze, and Twink liked the look of her instantly. She had a bright, friendly face and sparkling eyes.

âI'll leave you girls here,' said Mrs Lightwing. âGo inside and take two of the birds up to Daffodil Branch. You can choose your beds there; Mrs Hover will take care of you.' She flew off, consulting her clipboard.

Sooze laughed. âWe're opposites!' she said. And all at once Twink saw what she meant. Where Twink had pink hair and lavender wings, Sooze had lavender hair and pink wings. Both girls had pale rose-coloured skin, and violet eyes. They laughed delightedly, looking at each other.

Sooze hooked her arm through Twink's. âWe'll have to be friends, then. Opposites for ever!'

Twink's heart sang as they skipped towards the school. She had never dreamed that she'd find a friend so soon. And Sooze seemed just the sort of friend she would have wished for.

The two fairies went through the grand double doors. Twink stopped short, staring upwards. Sooze laughed. âHaven't you seen it before, then? My sister goes here, so it's nothing new to me!'

Twink couldn't answer. She stood with her head back, drinking in Glitterwings.

The inside of the oak was smooth and hollow, and seemed filled with a golden light. Up and up it went, like the highest of towers, with brightly lit corridors shooting off in every direction, as far up as Twink could see. Those were the tree's branches, she realised. Fairies flittered everywhere, swooping and flying, darting in and out of the corridors like hummingbirds.

Sooze nodded. âIt's great, isn't it? Come on, let's get the birds and go and see our branch!' She tugged at Twink's hand. Near the door, a small squad of grey and yellow tits stood waiting, with jaunty red saddles perched on their backs. 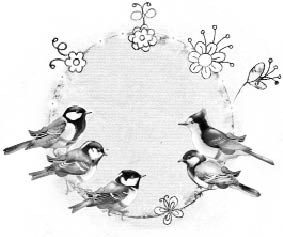 Sooze hopped on the nearest one, and Twink followed, settling her bag in front of her. Her bird cocked its head, regarding her with a shiny dark eye. Twink looked doubtfully at its smooth feathers, wondering what to hold on to. She had never ridden a bird before.

âHow do you â' she started.

âDaffodil Branch!' said Sooze. The two birds took off with a rush.

âEek!' shrieked Twink. She grabbed wildly at the glossy grey feathers, and looked down before she could stop herself â and then she wished she hadn't! The front doors were already so tiny that they looked like part of an ants' house. Oh, wasps! Her stomach lurched crazily.

âWhee!' Sooze cried. Her lavender hair blew across her laughing face. âI can hardly wait to
really
fly,' she called across to Twink. âBut this is a lot better than riding mice!'

Twink clutched her bird's feathers as branches and classrooms sped past them. She thought she'd give anything to be back on the ground with safe, obedient Brownie!

But then as suddenly as the ride had begun, it was over. Spreading their wings, the two birds landed on a ledge with a single daffodil hanging over it. Shakily, Twink slid from her saddle as Sooze jumped off and pushed open the door.

Their branch was decorated with dozens of white and yellow daffodils. A carpet of light green moss lay underfoot. Cosy beds made of darker moss lined the curved walls, with a single large daffodil hanging upside down over each one like a canopy.

The other fairies in the room were chatting and laughing, unpacking their bags. Sooze grabbed Twink's arm. âCome on, let's choose our beds.' The two fairies raced into the room.

There were eight mossy beds, and only two of them weren't already taken. One was at the very end of the row, and the other halfway through it. Twink stopped short in disappointment. She had hoped to have a bed beside Sooze.

Sooze just shrugged when she saw, and hopped on to the bed halfway through the row. âI'll take this one. Lots of company!'

Twink hesitated, and looked at the fairy on the bed next to Sooze's. âWould you like to swap?' she asked.

The fairy had silvery-green hair and lacy green wings, and wore a very posh frock made of woven dandelion petals. She stuck her pointed nose in the air.

âNo, I won't swap. You should have got here earlier, shouldn't you?'

Sooze laughed. âOh dear, I chose the wrong bed. Fancy having to live next to you!'

The fairy sniffed and turned away. Twink bit the inside of her cheek to keep from giggling. Going over to the last empty bed, she put her bag on it and glanced at the fairy who had the bed next to her.

Her eyes widened. She was the most beautiful young fairy Twink had ever seen, with shimmering dark blue hair and silver wings with delicate golden swirls on them. Her dress of bluebell blossoms looked so lovely on her that Twink felt plain and dull in comparison.

The Man of my Dreams by Quintal, Gladys
Aftershock: The Next Economy and America's Future by Robert B. Reich
One to Keep (One to Hold) by Tia Louise
Batteries Not Required by Linda Lael Miller
A Prayer for the Dying by Stewart O'Nan
Cat Groove (Stray Cats) by Megan Slayer
Love Never Dies by Christina Dodd
The Illustrious Dead by Stephan Talty
The Overseer by Conlan Brown
Antler Dust (The Allison Coil Mystery Series Book 1) by Stevens, Mark
Our partner